The short version:
race #: 638
Finished in 2:04:22.5, for a 9:29 Min/Mi pace
42nd in Women 25-39
4 Clif Bloks consumed
Gorgeous weather
Fantastic course
Great company
Only embarrassment: my headband slipped down, so I have a lovely sunburn line right across the middle of my forehead
Aches and pains: quads and my second-to-littlest left toe, which really cannot any longer be considered to be a toe, but simply a blister with an attached toenail
End-of-the-race photo (thanks Jessica!) : 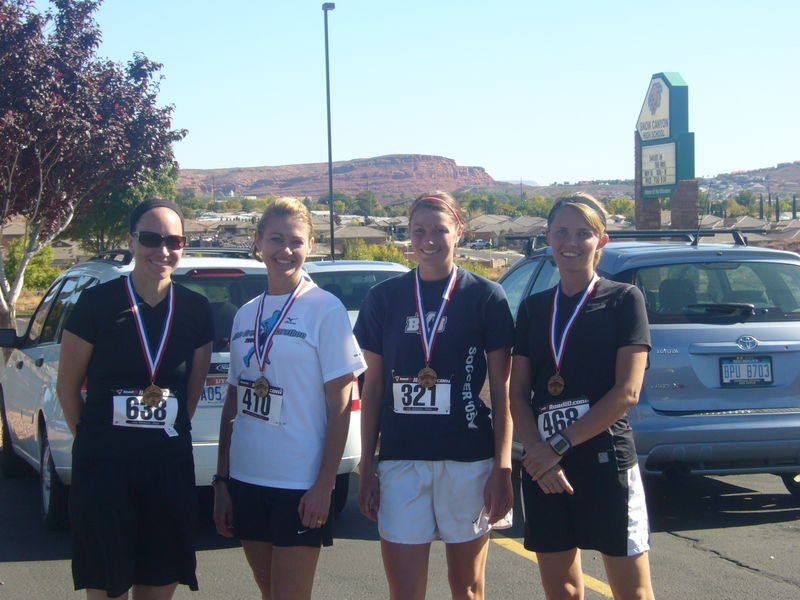 The Long Version: (as if I could just leave it with the short version!)

When you're running for 2+ hours, you have a lot of time to think. Even with music coming through my headphones, my thoughts kept running all over the place. From mile 4-ish to somewhere in the middle of the seventh, I thought about how I would write about the race. Of course, there are tons of details to include. Like how the route was way more hilly than I expected or planned for, both up and down but consistently losing altitude, so today my quads are killing me. Or how the out-and-back part, on the dirt road, seemed to be everyone's least favorite spot, except for mine. Me, I loved how intimate the contact felt with the canyon, on the dirt road nearer the canyon walls. Plus, having an out-and-back portion helped calm my starting-to-paralyze-me fears over coming in dead last; on the -back part I could see there were still plenty of people behind me. Or even how, during the last mile, my feet hurt so badly that the stones in the asphalt each seemed to be a tiny dagger slicing right through my shoes' tread, down through the balls of my toes and right to the bones.

But what I am not sure of how to do is to relate, with the details, how the race felt for me. It's an odd thing to say about a bunch of people running down a canyon, for feet on pavement, but the race had a certain spirit for me. Yeah---that does sound weird. But I'm going with it. I started feeling it while we stood near the starting line, waiting for the race officials to smooth out some problem with the aid stations. The color of the light, the shadow-and-sunspot pattern on the sandstone walls, the blue sky with its few streaks of clouds. Then, the sudden and steep downhill. You know that I'm literally fearful of downhills, right? So I started out a little bit hesitant. I immediately lost sight of Jess, Taunya, and Hayley, my racing compatriots, but then, I knew I would: they were always going to be faster than me. With all that initial downhill, it was a little bit hard for me to get a good pace going; I'd trust myself enough to speed up a little bit, but then I'd get unsure and pull back a bit. I'm certain the runners around me, who I'd pass and then let pass, must have thought I was crazy.

Once we got off the road, though, and onto a biking trail, I was feeling better. Settling into the run. While I ran, I looked at the landscape. Here and there were trails, sandy little divets winding through the cactus and sagebrush, and I'd have these wild little desires to take the trails instead. At mile 4, the route went off the bike trail and onto that dirt road, and that was when I really felt great, even though there were racers already coming down when I was only half-way up the road. I found myself passing other runners, especially on the uphill parts---feeling quick, really quick, passing people on uphills. (Even though that "quick" feeling is really subjective; I think I'm still slower than the majority of the other runners in the race.)

At the aid station by the turn-around spot, I suddenly remembered Becky telling me that I should start taking my Bloks early on in the race. So I grabbed one out of my pocket (the boys shorts worked perfectly!), chewed it up, and grabbed some water. That was the way I handled all the aid stations: a Blok, or just a half Blok, and a few mouthfuls of water. The aid stations were spaced out perfectly for me, so just as I felt I was starting to run out of energy, that half a Blok kept me going. I never really felt spent.

After the out-and-back, we continued on down the canyon. Somewhere along the approximately 892nd hill, I was no longer afraid of going down. I don't know why at all. Suddenly I was just flying, feeling fast and lethal---but going downhill. From then on, I used the downhills to add a little speed to my time, or to pass people I couldn't stand to be behind for one second longer. (Like the girl whose lower legs flew up at an odd angle at every step, or the man whose grunting breaths I could hear over my music.)

Maybe that fast-and-lethal feeling (again...keeping it subjective and in comparison to my running friends' 8-minute miles) is what gave the race its spirit. Or my sudden downhill fearlessness. Plus the perfect weather, the gorgeous route, the feeling I had of being in shape, healthy, strong. It's hard to put a name on it. I know my speed isn't anything impressive. But I still felt this little inward glow of self-satisfaction. It felt like I was supposed to be there, running that race.

When I took my shoes off after the race, my toe looked like this: 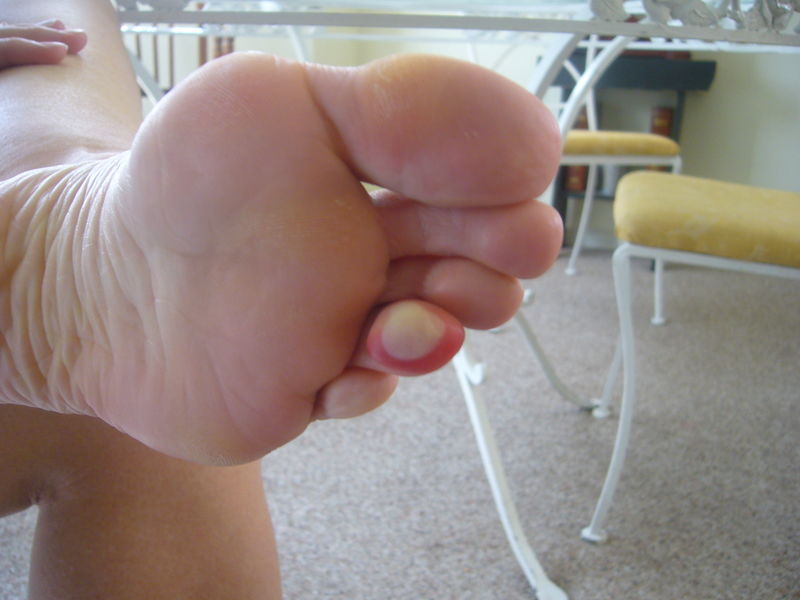 A lovely, multi-layered blister. With different colors of pus, even! My feet hurt, my IT bands ached, and I had that weird soreness I get right above the back of my pelvis. My quads were already tight. But it was worth it for that little inward glow. Runner's high, maybe. Or racer's high. Figured-out-running-sustenance high, runs-down-hills-with-confidence high, running-in-the-desert high. Whatever.

It's a good glow.

And I'm so impressed, Amy! I am not a runner, but think highly of those that are.

Oh wow, that toe looks really bad. How did you run on that. That hurts looking at it. As I was reading your blog about this race I wanted to be right along side you. I've got to get back into running. I see people running outside and want to be with them. I think I really enjoy the quiet and feeling the clean fresh air and that time to think about anything. I have got to get back into it somehow. I'm glad it went really well for you. You are my inspiration. Great job!

you are amazing and did an awesome job with the race! very inspiring to have read about your training and now with the culmination with the race.

take it easy and nurse your toe - you've earned a minute or two to kick back after a job well done!

I've been looking forward to reading your thoughts on the race. I love it that we can all run the same race, but have our own goals, and favorite or least favorite parts of the course. I had a great time. (Except for the soreness that no amount of advil will take away!) Take it easy on that toe. That is the biggest toe blister I have ever seen!

Congratulations! You are awesome.

Yay! You did it, and your time was AWESOME.

Now I get to say I TOLD YOU SO. Ah, I feels good. But it feels even better to know you had a great race and that you were doing what you were supposed to be doing.

(doing the happy dance for you!!)

That looks painful! I'm glad it's a good glow.

Ouch! I HATE blisters! I am so glad you got your high while you ran though! It sounds like you fully enjoyed yourself! I can't wait to start working out again...only a few more weeks right!? I am going to be induced this Thursday if I don't go by myself before that, which I am pretty sure wont happen. Anyway good job on the run! I hope your toe feels better soon!!
p.s. did you get the message about our pictures being ready to pick up at Costco?

So, so, so proud of you!!! You are amazing!!! I admire you for having a thought, making it a goal, and then achieving it!!
You ROCK!

I loved hearing about the race. I'm glad you had a good experience. You'll probably roll your eyes but you ARE inspiring the way you go forward to grab what you need from life. I would like to be more like that. Sometimes I think I'm afraid to try for fear I'll fail. It's easier to only do the things that come easy but not as fulfilling or inspiring, I think.

Congratulations! It sounds hard but strangely fun too. You are powerful.