Last night I fell asleep to the luxurious sound of falling rain; this morning, before my alarm went off, a stillness woke me. I walked to the back door to check on the weather and watched, astonished and dismayed, the storm transition: rain to snow.

All morning, the wet snow fell. It canceled field trips (Nathan’s) and service projects (Jake’s). It mounded into soft spheres on the snowball bush down the street. It made my plum tree droop; it made my stomach ache. Usually the sight of snow brings a sense of peace to me; after Utah’s long drought, snow in February or November lightens my global-warming anxieties. Snow at the end of May—snow on my iris and bleeding hearts and columbine—only fuels them.

When I rounded the corner to our house, after attending Nathan’s award ceremony at school, the snow surprised me again. Not only was my plum tree drooping (I’d expected that), but my sycamore trees were bent, with one branch nearly touching my driveway. I wasn’t sure if I’d be able to pull into the garage, so I rolled down the window to get a better look, and just then a snap filled up my heart.

Despite all the cold, it was almost a warm sound, evocative as it was of the crackle of campfire. But magnified, and sharper; a crack of splinter and bite. Then a soft patter, as of footsteps, as the snow fell around the fallen branch.

I know it’s probably silly. But I love my trees. I love them. I think of them almost as extra children—I greet them with hellos, I give them friendly pats, I am made happy in their presence. I’ve watched them grow from twigs. When they are damaged it almost feels the same as one of my kids getting hurt. (I will remember the crack of that branch as I will not forgot the crack of Nathan’s arm.) So I sat in my van and cried, and then I got out to investigate. Just as I closed the van door, another crack, another furious flutter of snow, but this time on the other side of my yard—my other sycamore, the one that was only as tall as Kendell when we planted it 13 years ago. Then, just a few seconds later, there was another snap.

The fact that one of those branches could have very easily hit Kaleb or me made me hustle him quickly into the house, and then a day of texture and pattern passed, green leaves frosted thick with snow, green leaves flying free of it. My neighbors came to help me; we braved the under atmosphere of trees reformed as umbrellas to flick and push and brush the snow away. The limbs, lightened, spring back into the air and then there is the texture of green leaves against the grey sky as the snow showers down. 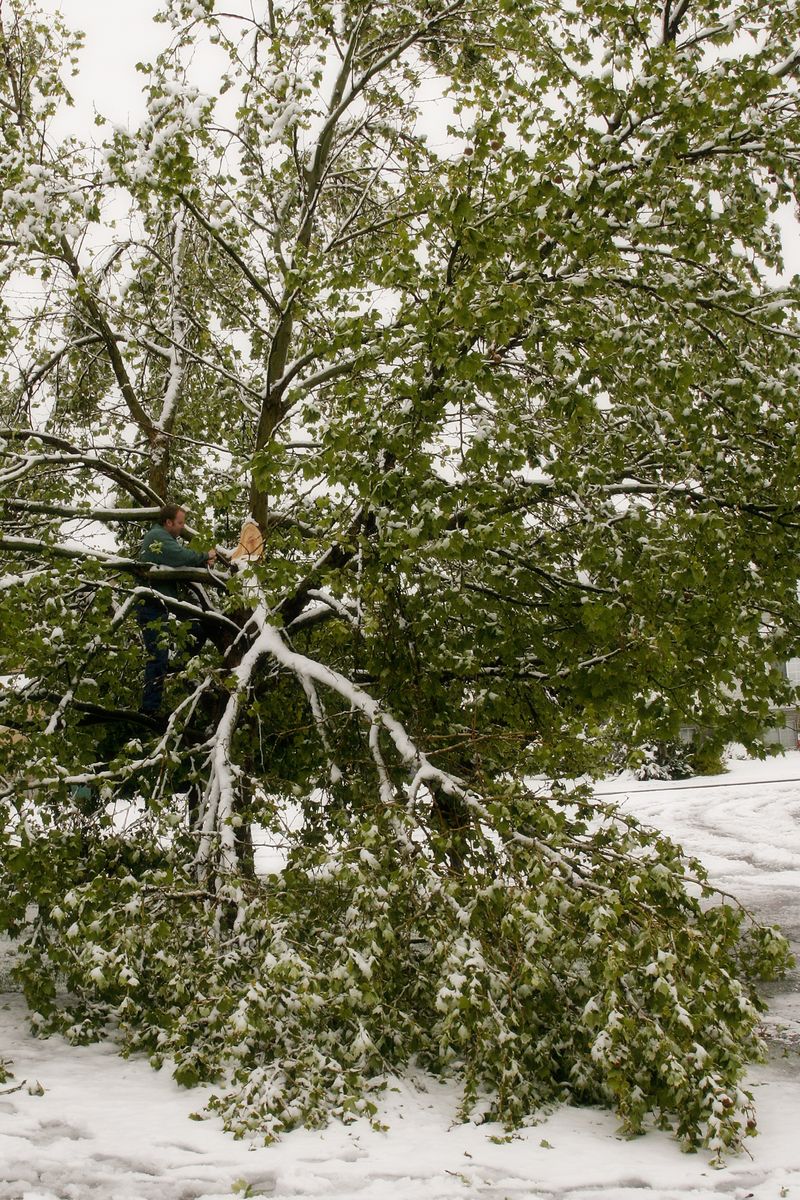 Later, different sorts of patterns: dappled leaves against clean blue sky. The opening and closing of the saffron beaks of the trees’ two baby robins, their twiggy nest still firm in an apex of branches. The upclose geometry of bark more than halfway up the tree while I struggled to saw down a broken branch, praying my feet wouldn’t slip and that my arms were strong enough to hold me. The jumble of sycamore and plum leaves the same color as a bowl of red and green grapes; a salad made of snow, leaves, and sawdust, tossed on the ground. The slurry the street became and then the widening arcs of dry pavement.

In the end, we filled the back of the truck to its fullest with fallen limbs. I learned that climbing trees is a perfect upper-body workout (both muscles and heart) and the perspective of my neighborhood seen from twenty feet up in my tree. I stared at the ugly gash in the middle of my tree, a scar that might never heal. I worried that we might have to take the entire thing down—worry still. I grieved again for all the destruction.

I hadn't thought through the grief aspect of your beautiful trees. I enjoyed reading this, Amy. I'm sorry for your loss. They will still be beautiful, however altered they may be.

What a powerful metaphor for experiencing the death of a loved one, and settling their worldly affairs after their departure.

I didn't realize yesterday which tree it was! I thought it was your already damaged one from last year; oh, I am doubly sad that it was your sycamores. It is because of your sycamores that I planted one (that is still a stick and no longer owned by me, but I love it still!)

I am sorry. I hope your trees will be okay.

Again? Oh no. I know the snow yesterday caused a lot of upheaval. I love how you expressed your feelings about trees. With your mention of them seeming like your children, I couldn't help but compare your heartache to that of parents who see their children suffer due to some heavy burden. Really beautiful thoughts, Amy.

I know how you feel, girlfriend. My little 3-year-old Linden whom I have loved like you love your trees (I talk to and lovingly pat mine too, by the way) lost a limb in yesterday's horrible surprise-snow. When I got home from work it was 3/4 detached from the main trunk but 1/4 was still hanging on. I couldn't bear to let it go -- I put a small metal bar against the limb and taped the branch back into place using packing tape. I know I'll have to accept it and cut the branch off, but I just can't ... yet. I'm so sorry you lost branches from several of your trees. It's heart-breaking!

Amy - this post ... the date ... the evocative prose ... oh my! May 24th was my 45th birthday. I didn't spend it celebrating in the usual way. I spent it at a memorial service for my husband's younger brother, who had taken his own life the previous Thursday morning.

There was a time when my brother-in-law was like a beautiful tree that flourished and blossomed despite harsh, cold, damaging snows. Like your sycamore, we had watched him taken down.

He began drinking at the age of 12. A notebook my husband discovered in his room (after death), outlined the chronology of his struggle. There were only 10 sober years, between ages 21-31. He lost a pastor position, two marriages and eventually his life to the demons he could not shake off.