Book Note: Before I Fall

When I was a kid, living my book-obsessed life, there wasn't a teen section of the library. There were children's books and chapter books, and then the great, irresistible leap to adult fiction. Of course, there were the classics, books that fell outside of the range of "chapter books" but didn't seem to belong on the adult shelf, either, and I read nearly all of these (as well as the attendant rest-of-the-series, if they existed): Little Women (my favorite-ever book from fourth to eighth grade), Alice in Wonderland, Swiss Family Robinson, Heidi (I still long to visit the Alps, courtesy of Heidi), The Secret Garden, Anne of Green Gables (I still wish I had red hair). And the fantasies—by Lloyd Alexander and E.B. White and C. S. Lewis. But, even though Holden Caulfield was invented twenty years before me, there just weren't a lot of books written specifically for teens. (Lois Lowry and Norma Fox Mazer and Judy Blume aside, of course.)
So once I got through all the librarian-recommended books for kids my age, I went straight for the adult stacks. I read Stephen King and Peter Straub and every scary novelist I could find. I read Danielle Steel and even obsessed for awhile about finding a copy of her book of "poems." (Even at 16, when I finally got to read it via interlibrary loan, I realized that they were "poems," not poems.) V. C. Andrews and Judith Krantz and Sidney Sheldon and Peter Benchley. The Clan of the Cave Bear and all its steamy sequels. I did read some Carl Sagan and John Irving, and classics in school like Fahrenheit 451 and The Scarlet Letter and The Grapes of Wrath; a little bit of Shakespeare, poetry in large amounts, The Bell Jar, and just a taste of Atwood. I loved Isabelle Allende. But a lot of what I read as a teenager was trashy—and way-too-grown-up trash at that.
In her reader's advisory book Book Crush, Nancy Nancy Pearl says that "I've never found that reading any particular book has seriously harmed any child." I've been thinking quite a bit about that idea lately, as Haley's brought home her AP reading list (she's going to read The Poisonwood Bible for first term) and my favorite library question ("what should my son/daughter read from the AP list?") has become more prevalent (as it always is during the first three weeks or so of a new school term). I suppose it depends on what you mean by "seriously harmed." Was it good on my psyche to read The Shining at twelve years old? Or to learn about sex from Judith Krantz and Jean Auel? (THAT set up quite a few disappointments later in life!) Abortion from John Irving and sibling rivalry from V.C. Andrews? I'm certain these books didn't hurt me, but they definitely influenced me, especially the horror novels. (Toss in my goth tendencies and that research paper I wrote on the Salem witchcraft trials and a copy of The Crucible and you can see the influence at work.)
All of which is a long way of stating: I am really grateful that adolescent lit exists now.
Last week, I picked up a hold for Haley, Before I Fall . 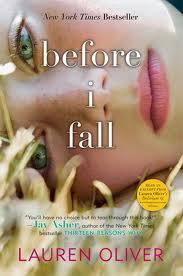 It's an adolescent lit title about a girl, Samantha Kingston, who is one of the four most popular girls at her high school. And although I was never a popular girl, I think the author nails a popular girl's voice: "It's nice that everything's easy for us. It's a good feeling knowing you can basically do whatever you want and there won't be any consequences. . . I have the first pick of everything. So what. That's the way it is." Although she's not as wealthy or big-breasted as her friends Elody, Ally, and Lindsay, Sam still gets what she wants: a perfect boyfriend, invites to all the best parties, and the entire school wishing they were her.
As I started this book (I read it after Haley), I was a little bit startled. It opens with the four friends on their way to school, dressed up in their Cupid Day outfits (pajamas, theoretically), drinking coffee and dishing on the day's Topic: Sam losing her virginity. She's promised her boyfriend Rob that it will happen that night. They're making jokes about it, and Sam's going along with them to cover up her nerves and her uncertainty. She wants to look ready for her friends, and wants to be ready to please her (seemingly) perfect boyfriend. She wants to do it so it's over with and she doesn't have to worry about it anymore. The book goes on to describe the girls skipping class, cheating on tests, flirting with a teacher, being utter bitches to their less-than-popular classmates, smoking, getting drunk, driving drunk.
Honestly, I am not a prude. The author, in fact, gets the details so right that I felt plopped down into my own history for a little bit. (Remember, I was a less-than-stellar teenager.) I had forgotten how that feels: being torn between wanting to make sure you seemed as normal as possible and doing what you really wanted to do (eating roast beef sandwiches from the school cafeteria, for example, is expressly forbidden for popular girls, so Sam never eats them even though roast beef is her favorite sandwich); the deep-down, camouflage-at-all-costs panic of wanting to fit in; the way certain teenage girls talk to each other with the ability to mock and deride anything; walking along the knife's edge of "acceptable" with the abyss of embarrassment plummeting on either side. None of it shocked me or rang untrue to how adolescence feels. But, I confess: It did make me squirm to think about Haley reading these things, even though I am certain that none of it shocked her, either, since she is living adolescence right now, not just remembering it. I started doubting my own reading philosphy—am I such a hypocrite that I can only apply the idea to myself, and not to my kids? Plus: had I just turned my daughter into a mean party girl who maybe really wants to sleep with her boyfriend by letting her read this book? Would it damage her incontestably?
I needed to finish it to make sure. Plus, I was swept up in the story and wanted to see how it would end. I wanted to see if it was just another trashy teenage romance, where the girl gets the dream boy and then everyone goes shopping for a new Vuitton bag and some Jimmy Chu shoes, or if there'd be some substance beyond the partying and the condom jokes. And, you know? There was. I'm not spoiling anything when I tell you that at the end of Cupid Day, Samantha is killed. (Because it says so right at the beginning, and on the inside flap.) She wakes up again the next day—day two—to discover that it's still Cupid Day, and she's going to relive it. If you're thinking Groundhog Day, stop it, only because I hate that movie. The premise is similar, but the execution is much better. What I loved about the novel is how, as she relives her last day six more times, Samantha begins to learn about herself. She realizes some truths about her friends, sees how their random cruelties and jokes have damaged others, begins to understand that popularity and the perfect boyfriend aren't necessarily the keys to happiness. Facing the specter of her own death, she changes. "When we get out of high school," she says at the beginning of the novel, "we'll look back and know we did everything right, that we kissed the cutes boys and went to the best parties, got in just enough trouble, listened to our music too loud, smoked too many cigarettes, and drank too much and laughed too much and listened too little, or not at all." By the end of the book, her definition of "doing everything right" has changed to looking beyond herself and her fears of what others might think of her; lingering over the everyday; savoring simple things like laughing with her friends. Being able to see who people really are instead of who they are pretending to be, and trying to be yourself.
In the end, I was relieved I didn't have to alter my reading philosophy. I stand by it: it's not the inclusion of "bad" things in a book that makes it a bad book. It's what the story does with the "bad" things that determines its quality. There are, of course, plenty of trashy YA novels...the shallow ones that glorify popularity and wealth as the one true way to happiness, for example. But Before I Fall isn't one of them. It shows one person's transformation, her way of coming to understand what is really important, and while no one really gets seven chances to make their last day perfect (at least...I don't think we do), I am certain it is worth reading about. It won't ruin Haley. It will open up a dialogue, if only for a few seconds, about decisions and consequences and all of that sort of motherly stuff...but that is a post for another day.

I am cursing the fact that it is Labor Day. If it weren't, I would go and get this book from the library. yeah, even though I have 3 books waiting and another one that I'm almost finished with. Ah, I need more time to read!!

I was JUST HAVING THIS CONVERSATION with a friend on Saturday night! (Well, not the exact same conversation, but talking about advanced reading lists for her son & what she should have him read). I'm totally sending her the link to your blog. And I'm with Becky, I'm going to add this to my library queue. xo

I really enjoyed this book -- it's a perfect title for a teen book club.

I am horrified looking back at how much VC Andrews I read.

But then again, I feel like I turned out OK
: )

I had forgotten how much I enjoyed reading VC Andrews in high school, I think. I might have to revisit!

I read so many inappropriate things in high school. *Blush*

You perfectly summed up my reading philosophy, however, with your statement that it's what the author does with the "bad" things that determines its quality.

I have been struggling with what to do with less than wholesome aspects to some of my reads. Emily Giffin's "Heart of the Matter," bothered me because it seems to give an underlining o.k. to adultery. I was uncomfortable reading it.

Then, I began listening to Billie Letts' "Made in the USA" and felt the same way about how the low-life behavior seemed to be glorified (shop-lifting, etc). I just didn't want to be pulled down into that muck.

But, I soldiered on and am seeing exactly what you are saying. I need to ride it out to the end and see what is done with the "bad" things. Bad things are, indeed, a part of life and we all make bad choices (even if they are not the ones we are reading about).