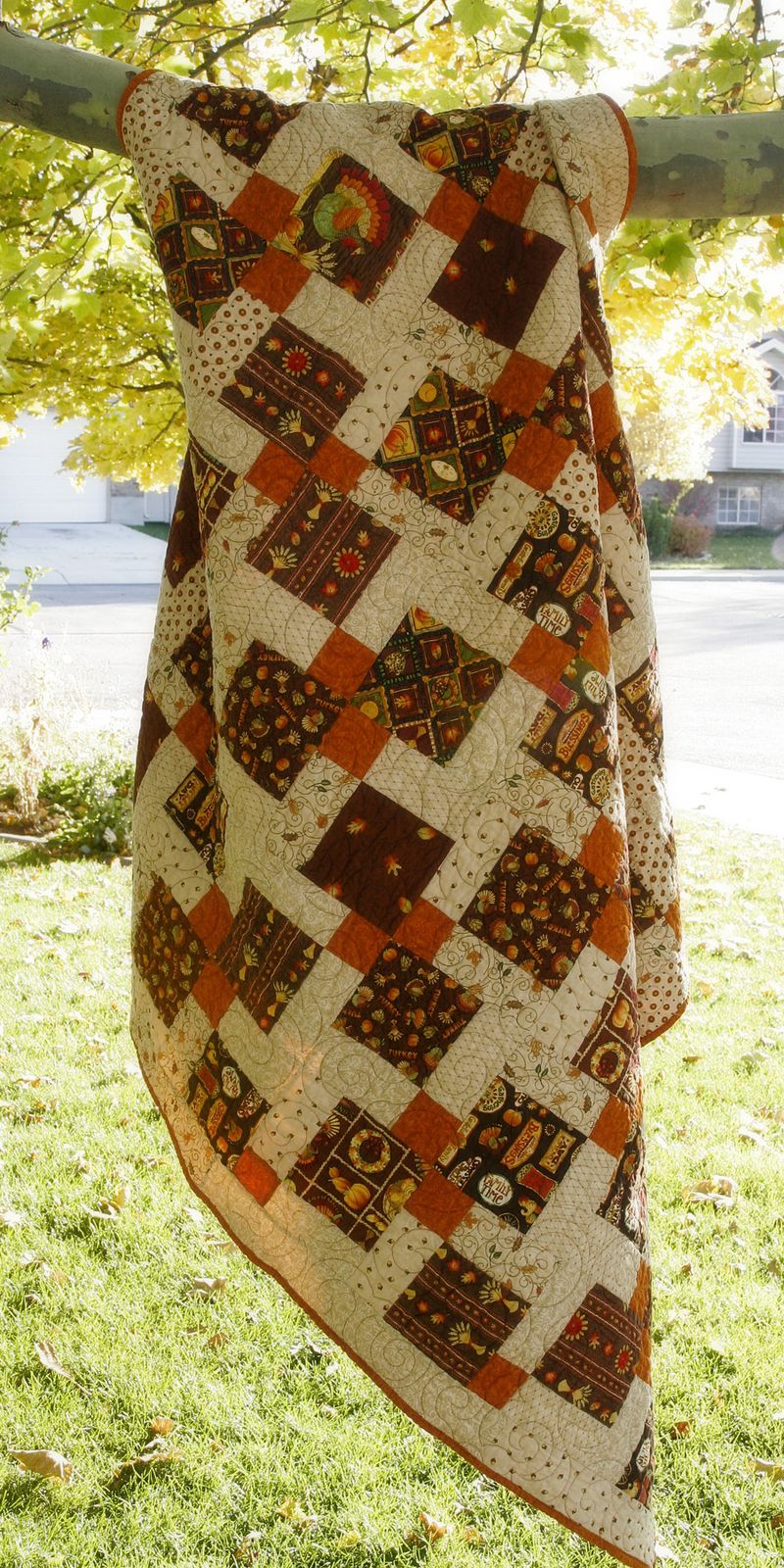 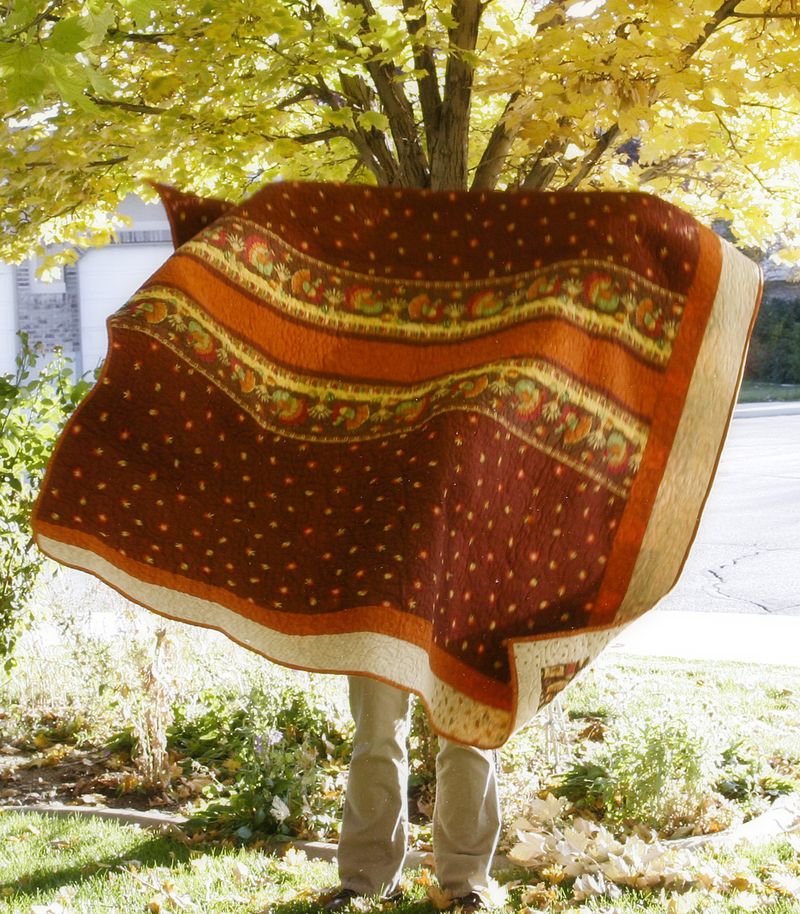 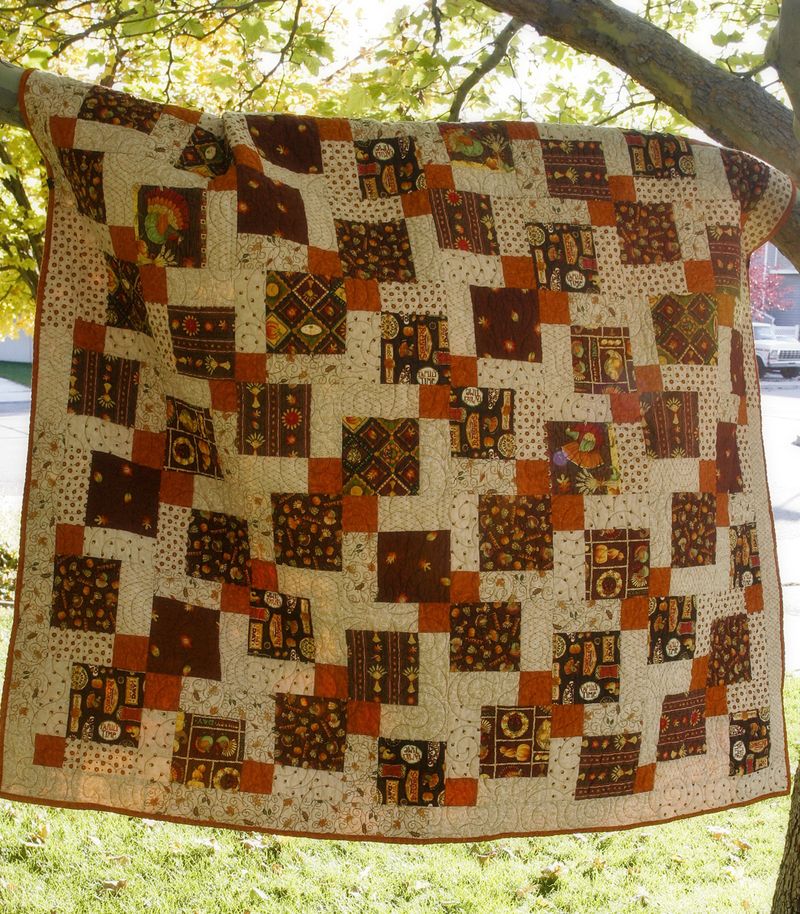 1. Assemble a bunch of nine-patch blocks. A nine patch is a single block made of, you guessed it, nine smaller squares, arranged in a 3x3 grid. Traditionally, the nine patch is pretty scrappy—nine different fabrics with a similar color but wildly different patterns, coordinated by the color similarity. You can make your nine patches that way, or you can take a more patterned approach. For mine, I was very careful: I wanted the outside corners to be dark (the Thanksgiving prints), the alternating squares light (creams), and the center that fabulous orange. I'll explain why in step #8. For my quilt, I made 16 nine-patch squares, built of 9 6" squares. Your measurements and block counts can be whatever you wish! For ease of explanation, though, I'm going to use my block number in these instructions: 16.

2. To assemble the nine patch squares:

3.  Square up your nine patches. I think even if you're really, really good at keeping your seam exactly 1/4", you'll still have to square up the nine patches. Or maybe not, but if you're anything like me, your nine patch "squares" won't be exactly square. In theory, they should be 17"x17", but I did have to square them up. This means I cut down all of my nine patches so that all the edges were square and straight, and in reality they are 16.75x16.75 instead. Can I be honest? I HATED this step.

4.  Now we're going to make the "disappearing" part of your nine patch squares. Cut each square in half, right through the middle, left to right. 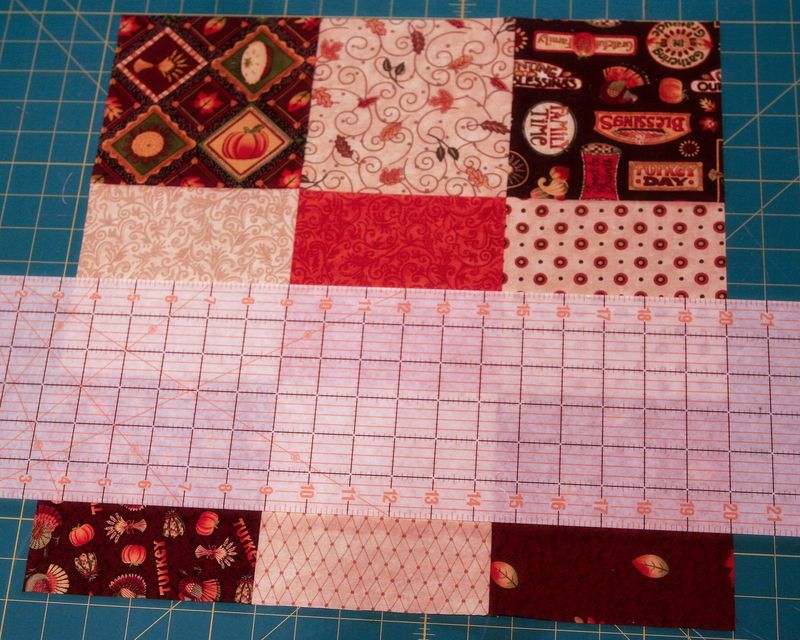 6.  This is important: as you cut each 9 patch into quarters, pile them together in the original formation. In other words, keep the centers together, like this: 7. Here is the step that makes the nine patch disappear: turn two of the smaller squares. (The entire pile!) I turned the top left and the bottom right squares: 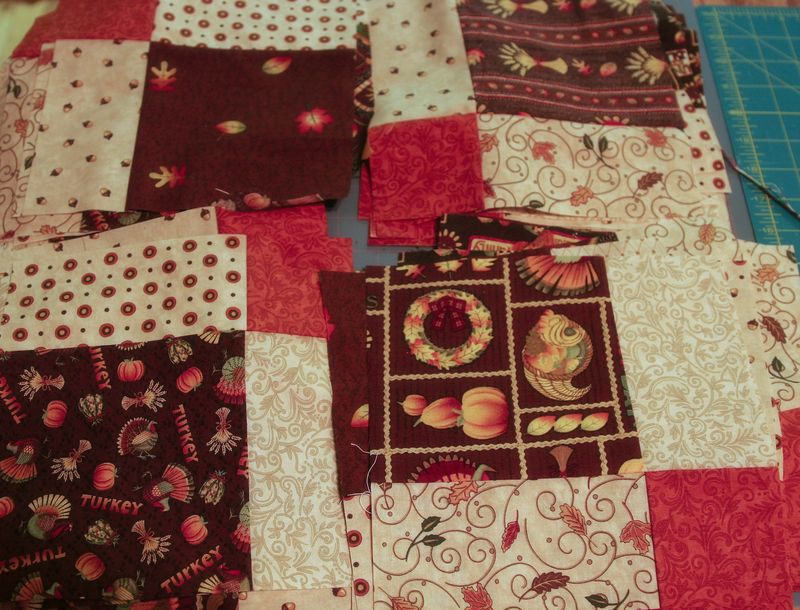 8. Now you have a pile of 64 4.25"x 4.25 squares. Sew them back together, paying attention to scrappiness (or not.) Now you see why I was careful with the pattern of my 9 patches: I wanted the orange square to be the small repeating one, to draw attention to it.

9. Once all your squares are sewn back together, iron them.

10. Lay your squares out on the floor, on a table, or a design wall if you have one (I don't, and thus this ugly photo taken at an odd angle in my front room). 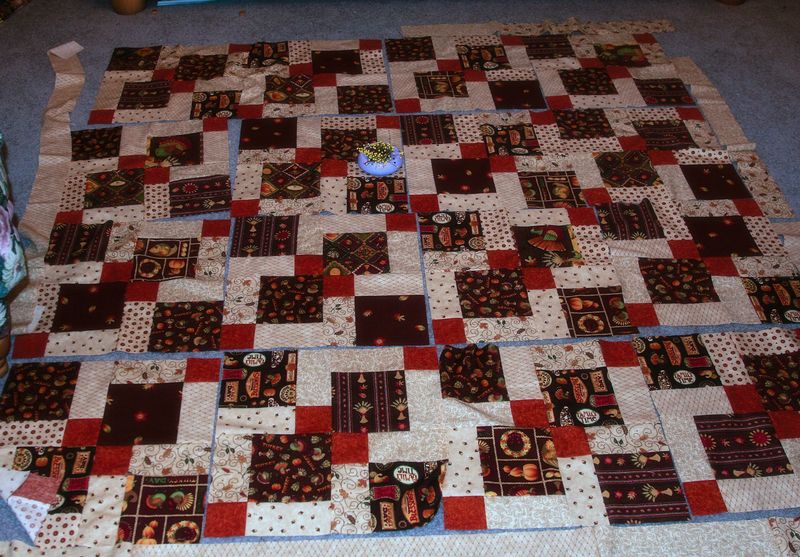 Play with the order and arrangement until you're happy, then sew the squares together into rows.

11. Sew the rows together into a big square.

12. Now, if you want, you can add a border. I don't always add borders, but I had a ton of the cream-colored fabrics left, so I decided to use it up. I cut 3" strips in random lengths and sewed them together to make a sort of scrappy border. If you add a border, do this:

13. Quilt! (That is an entire blog post in itself. I paid someone else to quilt this for me, because I know all too well the limitations of my sewing machine. It couldn't ever manage the pretty swirled quilting I wanted.) 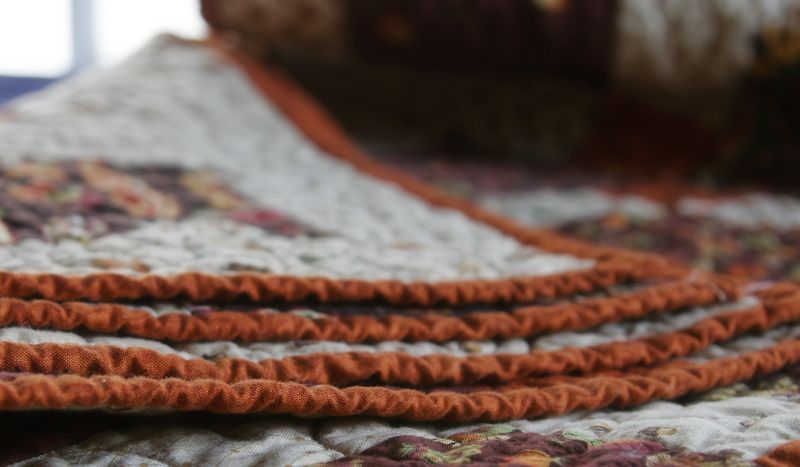 You can read my thoughts on binding (scroll down to the fifth paragraph after the photo), but for complete and easy-to-understand binding tutorials, try this one or this one or even this one. Actually, if you've never bound a quilt before, I would read all three! One tip: I've always done straight-grain binding, rather than cutting on the bias. Mostly this is because the one time I tried to cut bias binding strips, I ruined an entire yard of fabric. Sigh.

15. Enjoy! And if you make one, you should show me your results!

Wow, you are uber-talented, Amy. I am in awe.

You have me inspired! I'm going to the fabric store and buying some fabric. Oh, and I like to iron my seams open too. I'm such a rebel!:-P

I'm coming over to your house right now and stealing this quilt. You love me enough to let me do that, right?

You are one talented woman Amy! What a beautiful quilt.

I love this quilt. Love the fabric and the pattern. I'm just starting out with my quilting but I can't believe how much I like finding patterns and seeing them. Your instructions by the way, very nice and clear for those of us, who are still pestering their mothers with "what does this mean!?"

Oh my goodness! It's gorgeous!! I haven't quilted in years. I started one for my daughter the day before my son was born & finally finished it when he was about 18 months. But I haven't quilted since then. This makes me want to get back to a double 9 patch I started even longer ago...this quilt is THAT inspiring!

Your quilt is gorgeous. Haven't quilted since my youngest was born, but now that he is getting older, I am ready to get back to it. Would you care to share how much fabric you bought to do this quilt?
Thank you!

your quilt is stunning. I have just started working on my first one...a baby quilt. I want to make one for me but this quilt stuff is kinda hard for me..lol

Hi Amy,
I hope it's not too late to tell you that you've inspired not one, but two quilts to be made this fall! I began one a few days ago and asked a friend for help with cutting, etc as I'm new to quilting. She loved the design so much that she decided to use it for the quilt she had gathered fabric for!

Thank you so much for explaining it, showing photos, etc. We are so excited!

I'm linking you to my blog! I'm working on my first quilt and I really like your tutorial!

This has to be the clearest tutorial for disappearing nine patches that I've come across. I'm a new quilter and a DNP for my daughter is my next project. Does the layout of the original nine patches have to be the same, i.e. always using the same colours in the same order? I'm using batiks in rich jewel colours for this one and I have more than nine fabrics. My daughter's not too keen on the quilt having a pattern - she wants "wild colour' instead.
Thanks.

I love the sense of "organized randomness" you created and really appreciate the detailed instructions you provided on how you accomplished it. Absolutely gorgeous!

Your quilt is just lovely. Love the warm autumn colors. I love when a fabric calls my name in a store too. Just have to buy it! I especially loved when I read the word "titch". My mom has been saying that her whole life and people look so puzzled when they hear it. Loved seeing it in print! I also think the DNP is a wonderful block as the center square, when used like yours, as the same one throughout, pulls the whole quilt together. And, if you use a solid for the four inner squares when cut and regrouped looks like sashing with a common cornerstone square. So much you can do with that block. Love yours!