Eerie:  so mysterious, strange, or unexpected as to send a chill up the spine.

I think Merriam-Webster got it right, at least when you apply it to Halloween 2010: mysterious, strange, and unexpected. Perhaps we could throw in some other words, like deja-vu, party clothes, sleepy, casual, vague, and uncooperative.

Or, perhaps, some visuals to explain. First off, the mysterious: 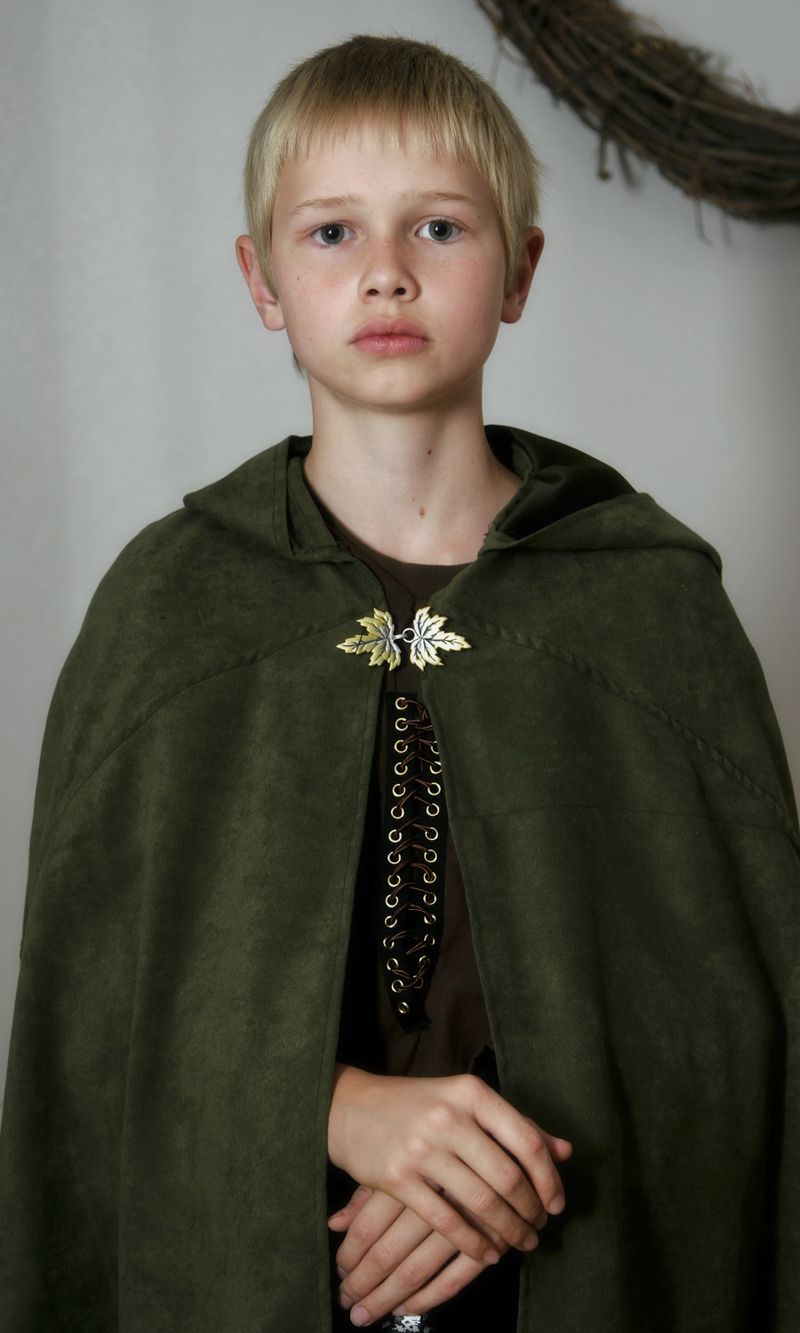 Who is this, you might ask? If you did, you'd be asking the same question Nathan's classmates asked him 247 times: just who is Nathan dressed as? Some hints:

If you guessed Aragorn from The Lord of the Rings, you are right! And very intelligent, too! Nathan's had hand-me-down costumes every Halloween since he was FIVE! Five! Like...half of his life! So I promised him that I'd make him something new. We didn't quite pull off everything necessary for the ideal Aragorn costume, but Nathan liked it, so the fact that everyone else didn't get it doesn't matter at all. He wanted the tunic to look like the one Aragorn wears in the movie, when Lord Elrond comes to Dunharrow to give him Narsil. I lucked out in finding some thick ribbon with eyelets already set in, so I just had to sew it on. It wasn't as awesome as it could have been (no woven belt, and he just used his old sword as we couldn't find a Narsil replica, and no big boots), but he loved it anyway. He trick-or-treated with his friend Jacob, who had an even cooler Roman soldier costume, and then hung out at his friend's house till nearly midnight, watching movies. 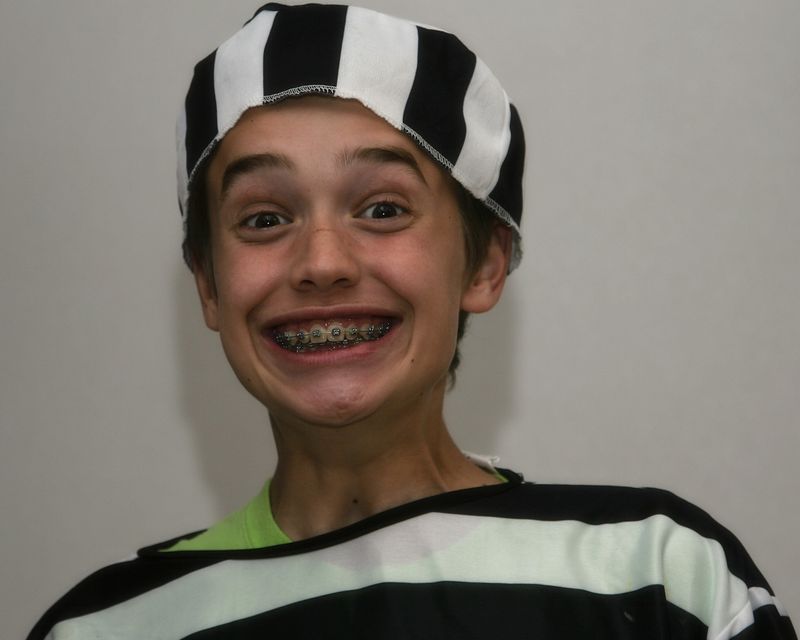 Jake wore the exact same costume last year. He was completely unconcerned about it, even though he's grown at least three inches and the prison-convict pants looked like capris. He's fairly mellow and go-with-the-flow these days (unless you ask him to mow the lawn, but that is a different post). The real story was his pumpkin, which he carved to look like a howling wolf. I think he spent two entire hours on it. Perhaps I need to find him a whittling class! He went trick-or-treating with a friend and then went to a party with the same friend and roughly 92% of the rest of my neighborhood. He took his pillowcase to gather candy in, which looked oddly appropriate, given the costume. About an hour before the trick-or-treating commenced, a deluge began. This wasn't a little rain. It was buckets of water. So Kaleb wandered off while I finished up his jack-o-lantern and promptly fell asleep on my bed, waiting for the rain to stop. This is noteworthy because the kid never takes a nap anymore. Never, I am starting to think, even sleeps. But, I had to wake him up, had to really work at waking him, so he could hit the streets once the rain stopped.

He wanted to be approximately 1,000 different things this year. Pirate, knight, devil, skeleton ninja, and vampire all were suggested, demanded, and/or requested. He finally agreed to just be the ninja because that was really his only choice. I was only up for sewing one costume this year. Only problem: he hated the mask (he kept saying "I don't like it 'cause it smells like my breath!"), so really he just looked like a dude in red pajamas. He went trick or treating with Kendell, and they timed it just right so he could walk with his best friend Lucas.

Here is the best only Halloween photo I got of Haley: 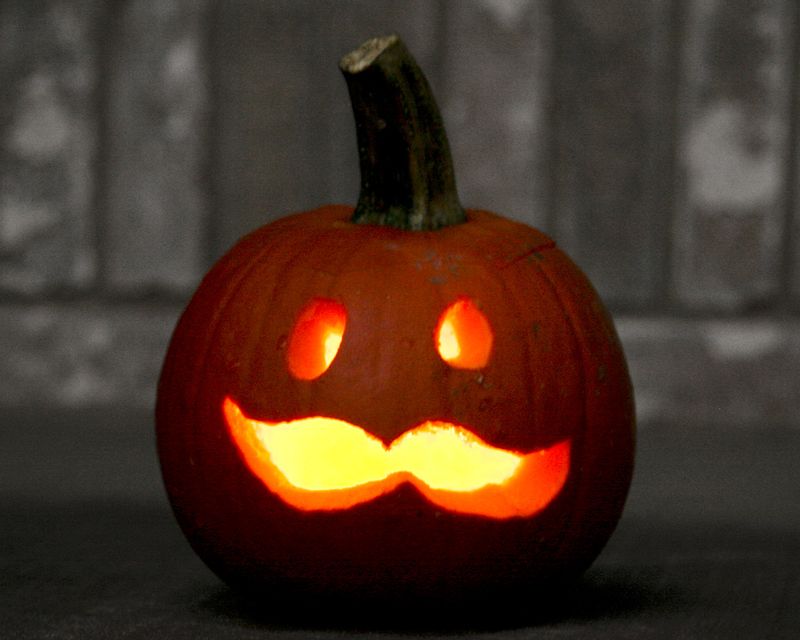 After much agonizing and discussion and back-and-forth texting, she decided to go to a Halloween party. (I was anxious about this party, as I didn't know most of the kids going, nor the parents; I did, however, call the mom where the party was, just to check everything out. I can't decide if I am overprotective, smart, or simply unfair. Just because I know what I would have done at a Halloween party as a teenager doesn't mean that's what Haley would do. In fact I think she'd do the opposite. Of course, I might also be completely clueless. Who knows?) No costume, no trick-or-treating, no post-trick-or-treating candy sorting with her siblings. Just a carved pumpkin and then poof! gone. To a party. How strange is that?

Sends a chill up the spine. 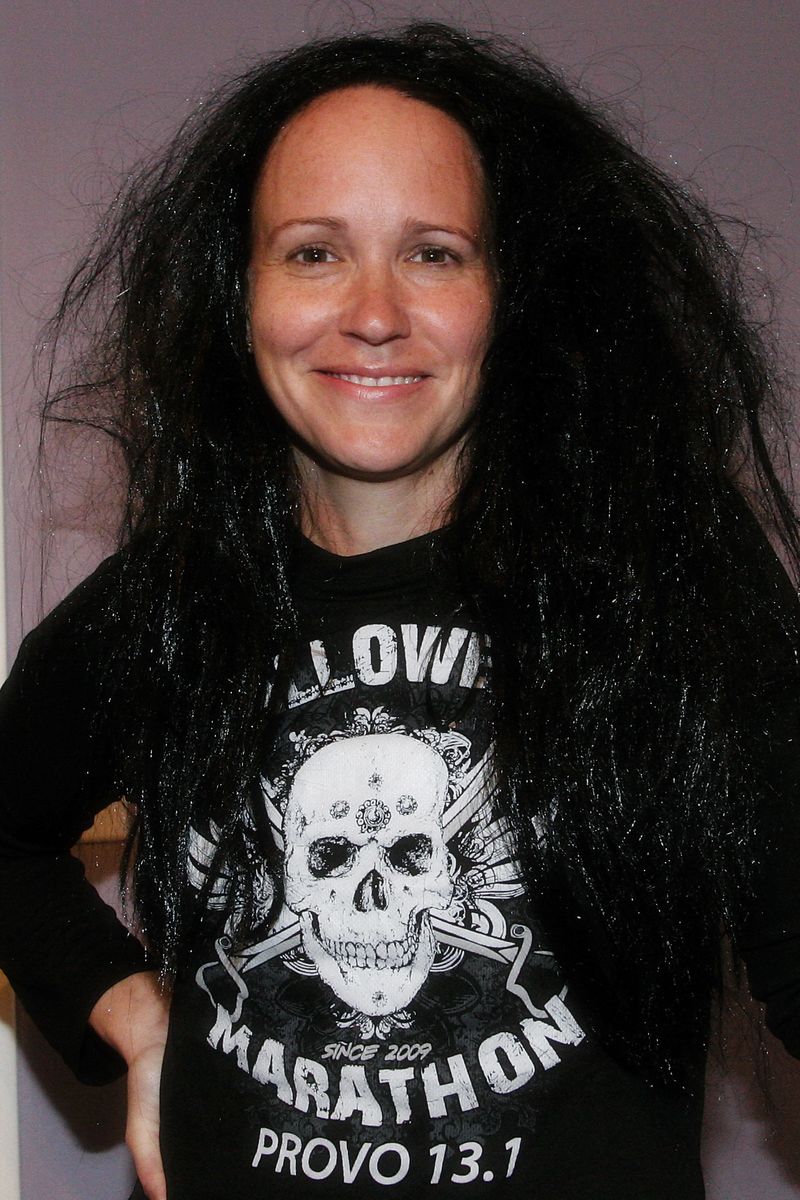 That's my Halloween costume: my coolest-ever race T and a creepy black wig. It's what I wore to hobble to the door to drop candy into outstretched buckets. "Hobble" because the bottom of my left foot was one big blister and because of five.point.five brutally, wonderfully steep miles in said race (more about it another day). While everyone else was out, I just answered the door and ate hummus with crackers and thought about coloring my hair black. What do you think?

That'd be Kendell, who won't ever let me take his picture unless I sneak, and has a hyper-sensitive photo-sneaking radar, so I almost never get a photo. In fact, it would be eerie if I had!

If it makes you feel any better, I knew immediately who Nathan was. Gorgeous costume.

Love the costumes. The picture of Kendell reminds me of trying to get his picture at Easter with Shane a few years ago. They do have a sensor for photos, don't they?

Love all of your costumes. Your witch wig rocks - I think you should wear it every day. :)

I vote for smart. I usually always call in situations like that and I'm pretty sure I have good kids and I know what they would do but you never really know do you so you gotta check and at least make sure they're going to a somewhat controlled environment. Just because so few parents do it anymore doesn't make it wrong to do it. I reiterate.... I think it makes you smart mom! :)

Tell hubby to suck it up and let you take his picture! My dad was like that, and now he's gone, and I have so few good pictures of him... So guilt him into it,for the sake of the kids!

That's funny about your Kendell. Colby has taken it a step further & won't even let me mention his existence on the blog anymore. (I still do. Ha ha.) Your wig looks super hott. You should totally dye your hair black. Mmmmm, hummus.

Great costume round-up post!
1.) I appreciate the hard-to-identify costume as Maddie was a "real witch" last year (right out of Roald Dahl's Witches) and the primary goal of a real witch is to pass mostly undetected among non-witches. It was a genius costume that no one under the age of 18 appreciated : )

2.) Matt and Kendell would get along nicely.

Very cute costumes! I love that race shirt. I saw a lady walking around the track last week wearing that shirt and wondered if it was from the halloween 1/2.