Home Archives Profile Subscribe
Pondering on this Late Night
What do You Want to Make?

it came without ribbons

(although, there were ribbons—400 feet of curly ones, to be exact; and bows—nearly two entire bagsful; there were boxes and packages and some of my favoritest-ever tags on the Santa gifts)

I didn't know if I would feel it this year, that enveloping spirit of Christmas. I tried to be more prepared so that in the last week before the big day, I could relax. Maybe bake a little, make my traditional candy. Spend time with the kids. I did manage to get nearly everything wrapped before the kids' last days of school, which made me feel a little better. But I still left too many things until the end. Instead of the relaxing pre-Christmas week I'd imagined, I needed to finish a sewing project. I went to my mom's house twice to help her clean out her basement. I made next year's calendar which meant a long stint with Photoshop and the resulting headache. (Am I the only person in the digital world who gets Photoshop-induced headaches? I can't be, can I?) I got the Christmas cards printed (finally) and the Christmas letter written. I agonized over the list of presents, knowing one kid would feel neglected but not entirely certain how to fix it. I nearly had a tiny little temper tantrum in the middle of Buckle over that very worry (luckily Haley was there with me and managed to talk me down). I went to the mall, to Target, to Costco, to Walmart, to Kohls, to another Walmart and another Target and another Costco and two fabric stores and two bakeries and three different gas stations and Office Max for good measure. I stood for two hours inside Target talking to people we kept bumping into. My late nights got progressively later: 12:45, 1:30, 2:15. 3:00. I was surviving on sugar & caffeine and feeling very Bilbo-esque: like butter scraped over too much bread.

But perhaps that very exhaustion (combined with the overwhelming anxiety of feeling like I hadn't done enough or made it good enough) that made it seem impossible to feel the Christmas spirit was the very thing that allowed it (once I let myself relax a little) to flood my heart in unprecedented richness.

I've already written down the details of my children's Christmases, so that come January (or some random other time in the future) when I sit down to scrap the photos, I won't have forgotten any of the details. The moments that felt like my gifts, when I felt the elusive but at last pervasive here is Christmas at last feeling I am setting down here:

The Hug
When I was a kid, my sisters and I had a tradition of drawing names for each other's gifts. I don't remember if we opened these "sister gifts" on Christmas eve or Christmas day, but I know we all looked forward to it. I've kept that tradition with my kids, only we call them the "sibling gifts" and always open them on Christmas eve, after the pajamas but before the reading of Luke chapter 2. This year, Haley gave to Kaleb and she decided to get him a soccer ball. He's been wanting his own soccer ball for awhile but I kept putting it off, so he was completely surprised and excited. After thanking Haley, he came to me where I was sitting on the couch. "Momma," he said. "Thank you for this soccer ball. I love it so much!" And then he hugged me. His affection felt so entirely real and his gratitude so sincere. In just that instant I felt like all my pent-up anxieties melted away and then a flood of Christmas spirit.
The Reading
Even though it causes some eye rolling and "really?"s, I insist on everyone sitting down and reading the Nativity story. Usually I do the actual reading, but this year Jake asked to do it. Oh, my. This made my eyes swell up with tears, although I didn't let anyone see. I want to remember him reading those verses in his not-quite-14-year-old voice.

Cooking in the Dark of Night
Kendell usually falls asleep before I do on Christmas eve. This used to sort of bug me. Wasn't the playing of Santa something couples all across America doing together? But I long ago realized that I actually love doing it myself. It makes me happy and gives me a chance to think. This year, he fell asleep as usual, but Haley stayed up with me while I finished the food for the next day. I needed to make the sausage casserole, finish the sweet rolls, and put together the wassail. Haley did the sweet rolls while I did the rest. We talked and laughed and got stuff done. I'm certain she would have stayed up with me to put out the gifts, too. But I still wanted her to have some magic in the morning. She helped me carry the sacks of presents downstairs and then she went to bed. Having her help with the food gave me a deep happiness. It helped me remember that while the Christmases of her childhood are past, there is much joy to find in these of her adolescence.
The Sacrament
Our church had an hour-long meeting with the other two congregations in our area. My kids resisted going to church a little bit, but they didn't know it wouldn't ever be an option not to. Aside from the fact that, hello! It's Christmas. We are celebrating Christ here, not commercialism! but there was a moment I wanted to have. In our church, the boys who are 12 and 13 years old pass the sacrament. This means that for the past few weeks, Jake and Nathan have been passing it together. There will never be this moment again in the history of moments: these two brothers passing the sacrament at the same time on Christmas Sunday. I knew it would matter to me. What I didn't realize was the effect the combination of three congregations would have. There were 18-20 boys, in dark suits and ties, gathered together in a mass to serve other people. None of them are perfect, I know. But the combined strength of their goodness and their right intentions was so palpable I almost couldn't look at any of them. It brought, almost more than any other moment, the true meaning of Christmas into sharp focus for me.

The LaughCry
One of the songs we sang in church was "Away in the Manger." It reminded me of something I'd completely forgotten: the cattle were lowing. My dad always used to joke about that. "What does it mean, the cattle are 'lowing'?" he'd joke. "Have you ever heard a cow low? I thought they mooooooooo'd" and then he'd sing the sing with "moo" replacing "low." I did that combination laughcry, a hiccup's-worth of uncontrolled emotion: laughter at his sense of humor and at being able to find it in such an unexpected place, sorrow because—I miss him. I miss him always, but I miss him at Christmas, when he'd always manage to find a dirty joke to tell at the dinner table and then give my mom something wildly inappropriate and too expensive. I miss how he made me laugh but I am joyful that he can still manage it.
The Bells
"I Heard the Bells on Christmas Day" has never been one of my favorite carols. I don't dislike it, but I don't love singing it. When you compare it to the exuberance of "Far Far Away on Judea's Plain" or the elegant joy of "It Came Upon a Midnight Clear," "Bells" just seems so somber. At the end of the meeting, however, we sang it, and the pianist played it on the organ instead of the piano. The organ was set so it sounded just like bells, and that shift in the music completely undid me. Haley and Nathan both asked me why I was crying. I couldn't help it. The anxieties of the preparation, the arguments over spending, the stress of wanting to make everything just right, and the way I had felt so certain that peace would not be found—these things felt perfectly summed up by the idea of "the wrong," which the song says will fail. God is not dead. My heart revolved to day.

The Gifts
There were three gifts this year I was so excited to see opened:

All of which served to let me see that I have arrived squarely in the middle of that part of life when giving really, really is better than receiving.

My Gift
Although, Haley did give me something pretty awesome! She put this four-photo panel together for me, starting with finding the frame, taking the photos (trust me...three boys are hard to photograph), developing the photos, and assembling it all. I love it. The frame is exactly my taste and the photos are perfect. Even the font she used was just right! 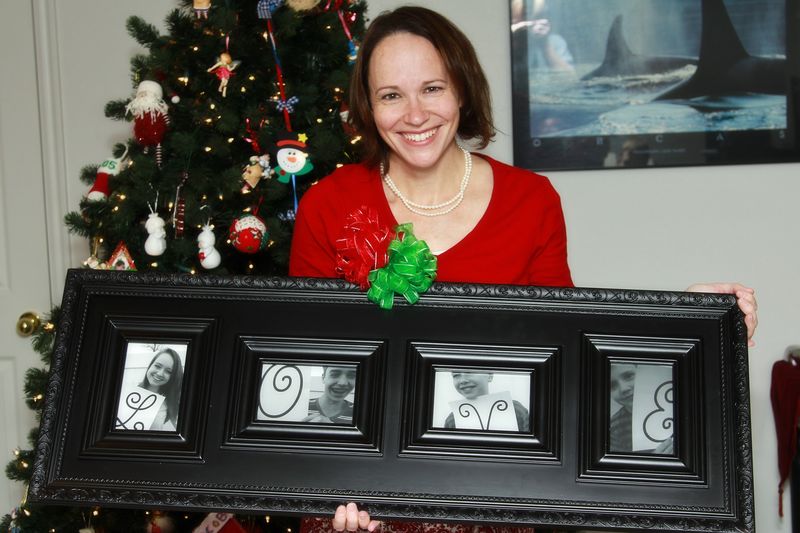 I wasn't sure, starting this post, if I could say what I wanted to express. I don't think I have, exactly. Perhaps this is because I don't have the way to put into words what I felt. But I will keep this words I did manage and use them as a reminder, next year, when I am, frazzled and stressed and sad, my own Amy version of Grinchiness: if I let it, it will come. Christmas will visit my heart, too, even if I am anxious and exhausted, in ways I can never imagine but which are exactly what is needed.

I love this post!!! I laughed out loud at away in a manger a few weeks ago in relief society. I love that he comes back to us in little ways.

Wow Amy! I love reading your posts. You express so much in all of them and care so much about your kids and the treasures you make for them. I really admire you. I love all the details you put in your posts with your amazing photos. Love it!

Haley has your talent with the camera I think - What a sweet gift from an amazing daughter!

Just a really wonderful post. I might be a little weepy right now, too. I get that way sometimes.

What a beautiful post. (I love Haley's gift to you. What a thoughtful daughter.)

I keep thinking about how you have a real relationship with Haley. I can picture you two staying up on Christmas Eve and her putting together the perfect (and thoughtful) gift for you. I don't have a relationship like that with my kids. Yet. I look forward to when our relationships don't only involve me begging them to shower and put away their toys. I look forward to actually being friends with my kids which is something I don't really think a lot about but probably should.

This really moved me, on many levels. Thank you! And I LOVE Haley's gift to you! Just the coolest gift ever.