On the morning that my dad died, my uncle Roe—Dad's brother—brought my sisters and me an unexpected and priceless gift: their mother's photo albums. My Grandma Elsie was quite the photo buff; I trace my love of pictures and scrapbooking directly from her example. In these albums were photos I had literally never seen before, including this one: 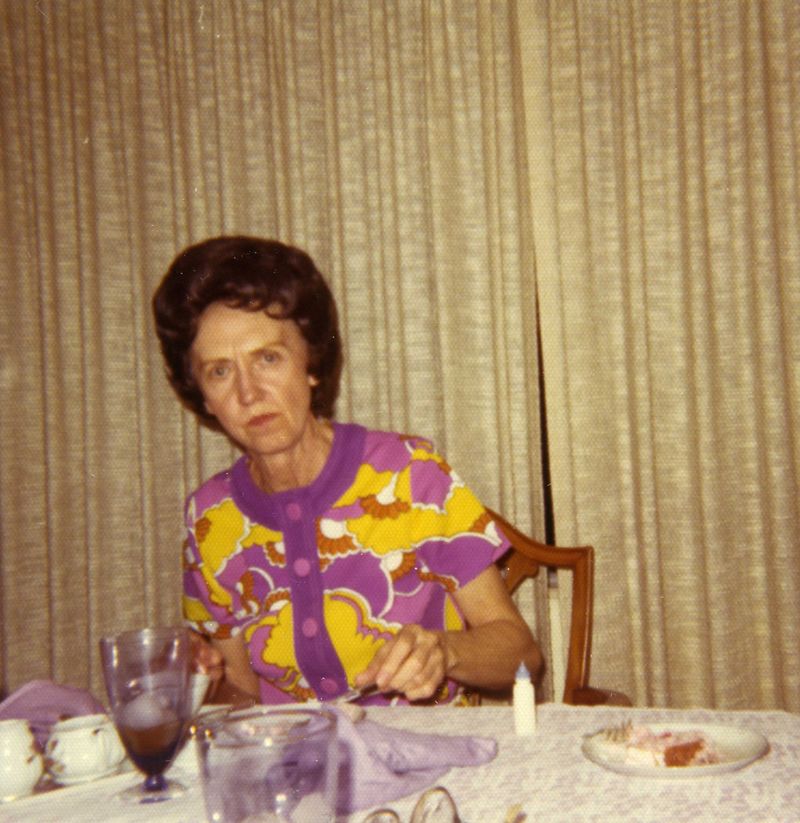 which is of my other grandma. I love so much about this picture, not the least being that both of my grandmas found themselves at a function together, and one of them took a photo of the other. The purple glasses (I own those now!), the fancy plates, the doll bottle; Grandma's outfit and hairdo (so very seventies!). It's not the most flattering photo of her—no one looks especially photogenic when they're swallowing—and almost makes her look mean, which she was not ever capable of. She's the person I associate with complete, pure love, the kind that doesn't ask for anything back. This photo accomplishes two other things: takes me back to how it felt to be loved unconditionally by Grandma Florence and reinforces the love I have for Grandma Elsie.

There is this one: 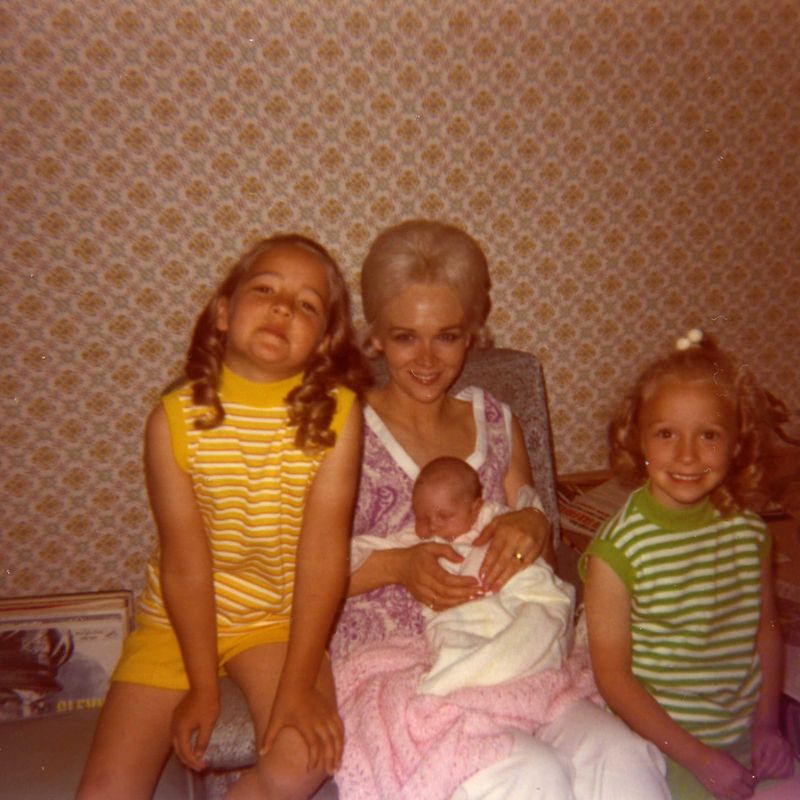 which is me as the baby, with my mom and my two older sisters. I can't believe how much my sisters resemble the daughters they would one day have! and look at that paisley print on my mom's shirt!

But my absolute favorite one is this one: 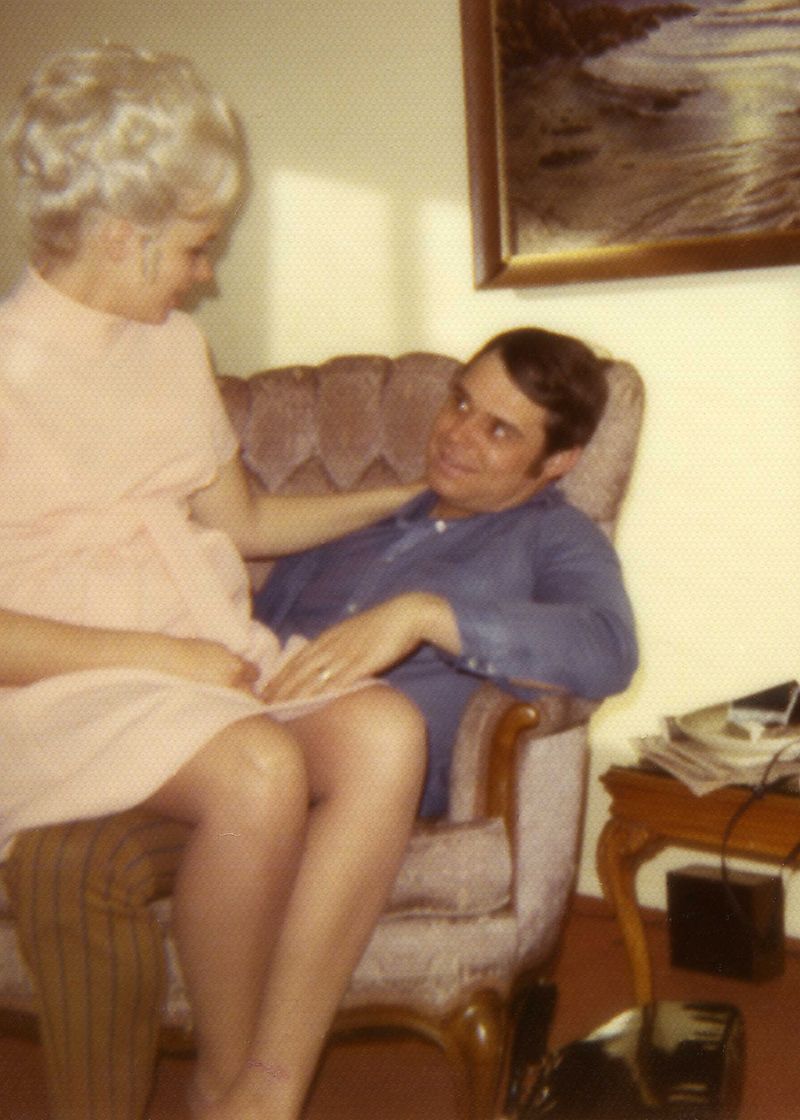 t's hard to tell, but my mom is pregnant here with me. I almost can't stand it, this makes me so happy—a photo of my pregnant mother. I love it for many other reasons (look at the stripes on those pants!) but mainly for the look on my dad's face. He loved her! And she loved him back! Since I know what would come for them in the following 40 or so years, this brings me an unmeasurable (and unnameable) happiness. Seeing proof that they loved each other alters how I feel about myself. It makes me feel more certain and secure.

It also reminds me: photos matter so much. Sometimes I wonder. The difference between then and now is enormous. Back then, photos were meted out carefully, one film frame at a time. Now I can easily snap 100 in an hour if I want to. Now we are overflowing with photos. Will they matter as much, given the abundance? I hope so. I think so. Maybe in a different, more familiar way. I know that to you, who "know" only me in the pictures, these are just old photos.

Someone else's old photos might be even less interesting to look at than someone else's vacation pictures. They matter to me because I know the people in them. I miss the people in them—my grandma who's been gone for more than twenty years now, of course. The healthy laughter of my father, which I haven't heard for half a decade even though he's only been gone for six months. But that version of my mom, too, young and still looking forward. I miss that even though I never really knew her like that. I miss those young times in our life, when we lived on the little red house on the corner by the library, with raspberry canes in the backyard and my best friend Teresa down the street. I miss the me who could still do anything. I miss my Grandma Elsie, whose presence is there by way of being the photographer, who I mostly missed my whole life because I didn't know her well enough.

But despite all the missing, these photos bring me so much happiness. Perhaps because of the sadness. They are proof that all of us existed. Proof that I was once small and just beginning and could do anything. All of our trails took us places no one could have planned or imagined. They also inspire me: Keep on taking pictures. Even if we have too many. Too many is better than too few or not enough, and I don't know what I might capture that will be a trigger, that will take one of my children back to some time in their life they need to remember existed. More photos, always more, as I continue moving forward on the path that started long before I can recall.

What a wonderful post. I do think photos have changed so much with digital cameras and the internet making sharing them so easy, but I like to think they'll still have significance to future generations.

I love every single one of these pictures. You know, even though I'm not even alive for any of them. J/k. the one of mom and dad? priceless. Who knew such a photo even existed?

Love this post and the pictures! You give me just the ammunition I need to keep being the annoying one taking tons of pics at all family events. :)

What wonderful treasures you have discovered! I'm with you....keep taking those pictures.