Half Dome Hike in Yosemite: Part 1.

The day before we hiked Half Dome—the day Kendell and I saw bits and pieces of Yosemite for the first time in our lives—we stopped at the first trailhead my guidebook recommended, the one that leads to Lembert Dome, just off of Tioga Road. 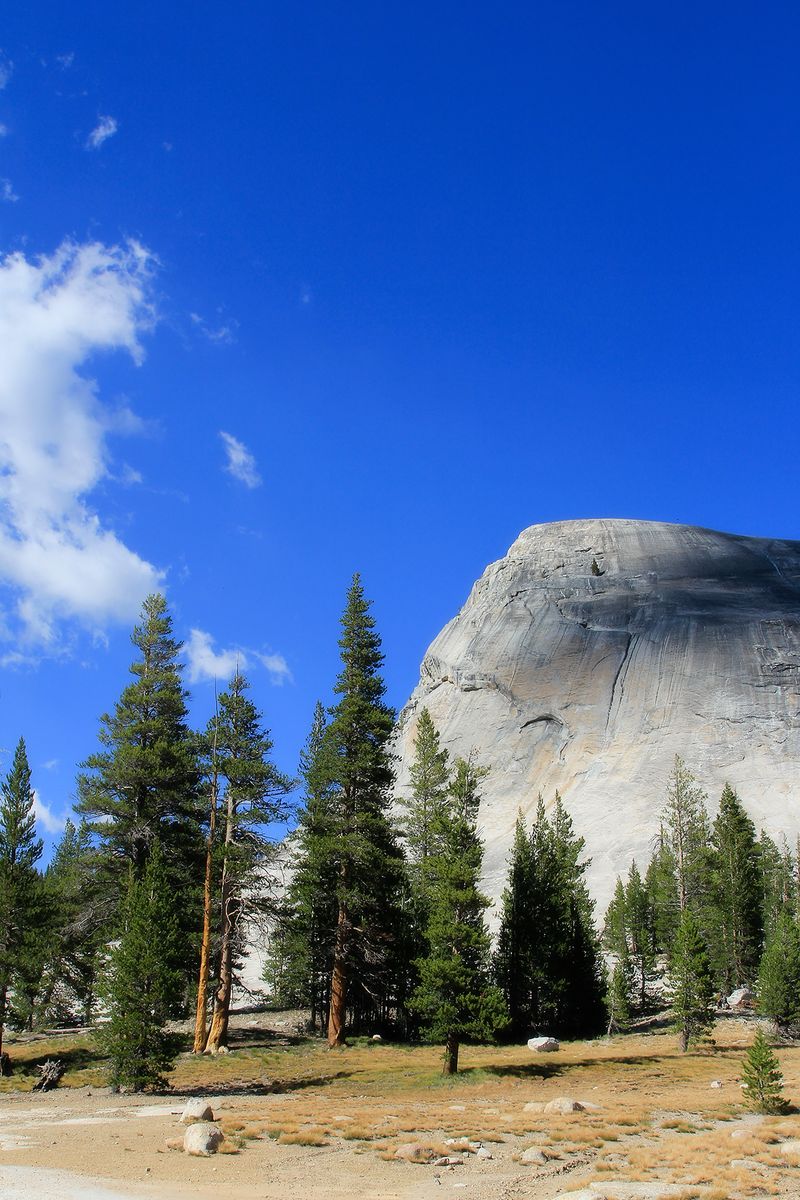 We pulled into the parking lot and found a great parking spot right away (a good omen for my husband, who doesn't like looking for parking spots but also doesn't like small parking spaces or parking between cars), took off our traveling flip flops and put on our light hikers. Then we found the trail. 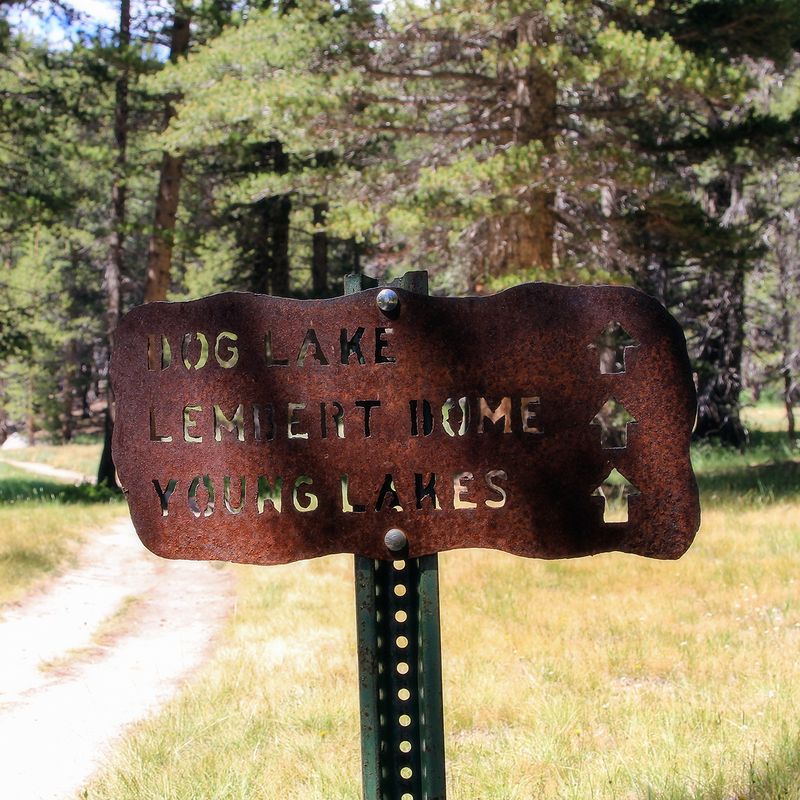 It was the wrong trail, turns out, the long way to Lembert Dome past Dog Lake, but I didn't care that my guide book had seemed to lie to me, because I was there, on a trail in Yosemite, moving through the shade of tall trees, and immediately I knew this was different. 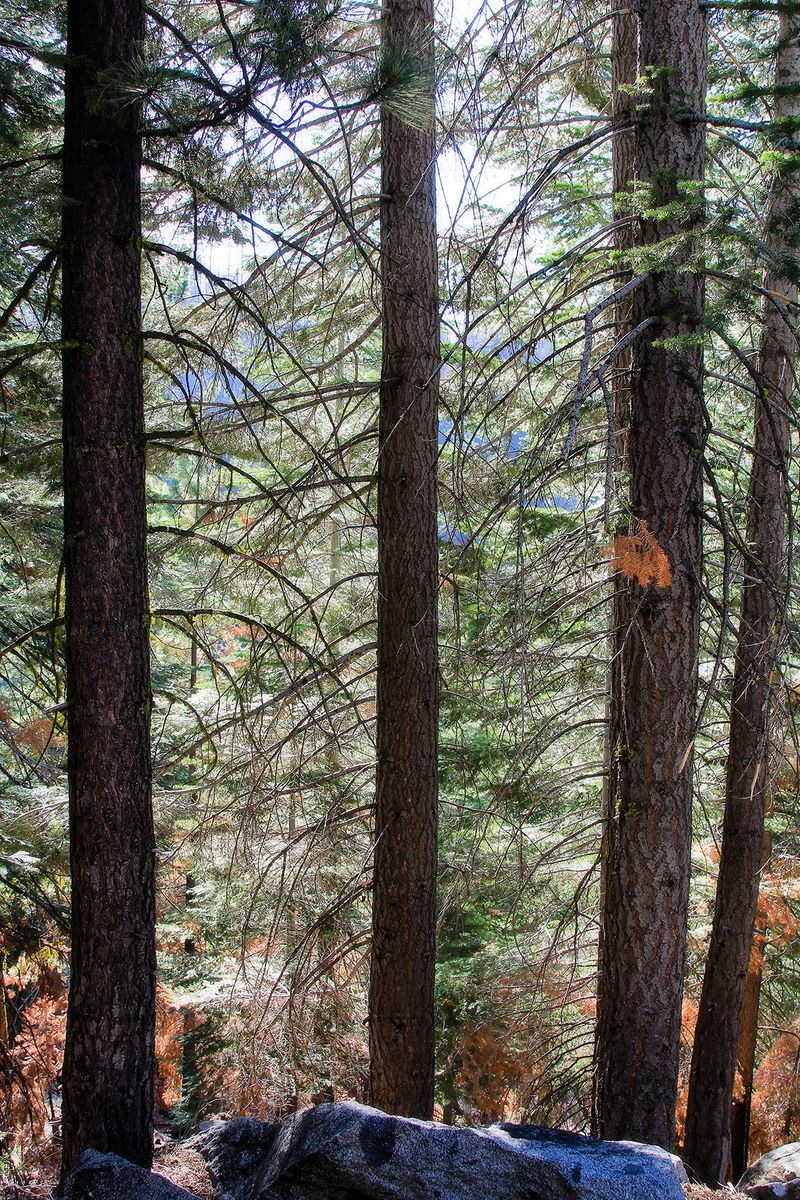 Every mountain has its own spirit, and as I wandered up the trail (the less step but longer way to Lembert Dome), I could sense just how different the Sierras are from my home range, the Wasatch. The soil was different, and the air (even though the elevation is not so different), the scent and the light, but especially the stone. There was no sliding, shifting shale clacking underneath our feet, but granite boulders, rounded or cracked through. A different texture, like hiking among God's casted off attempts at statues. His rough drafts, buried to their shoulders.

Or maybe the statues He meant to make.

We didn't want to hike too far or too long, because we knew we'd need every bit of energy for the next day. So we grew anxious when the trail was longer than we expected. We sought out advice from scout groups and Germans bewildered at our English questions. But we kept on and made it to the dome; we stood on top of it and looked at the view, calling it our pre-Half-Dome warm up. And then, the next day, we hiked Half Dome.

And really: it was everything the guidebooks told me it would be. The mist trail up the side of Vernal Fall was a black staircase in greenery, and while the fall wasn't flowing hard enough to spray us, it still felt otherworldy: damp and verdant, but with that sense of unyielding time that stone has. 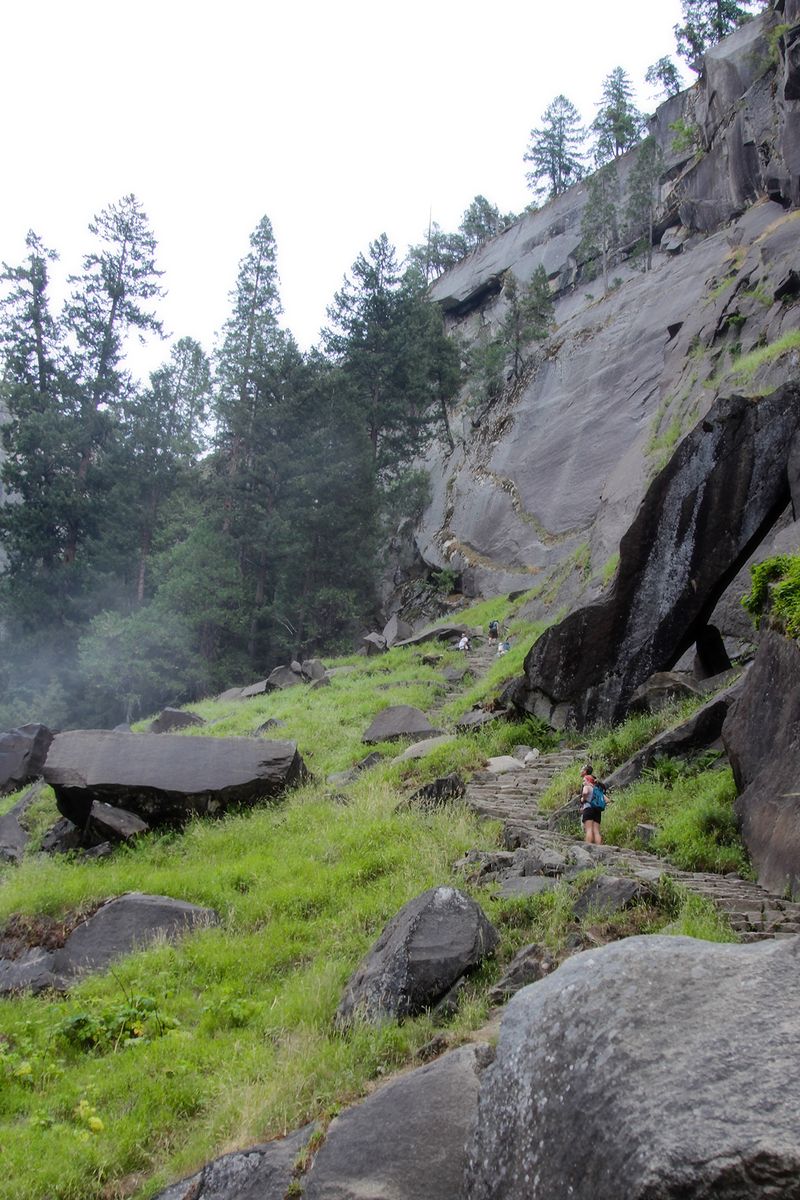 I confess that I very nearly climbed over the railing when we got to the top of the fall. I wanted to sit right on the edge, with my feet dangling over—that dry patch, where no doubt in spring water flows. 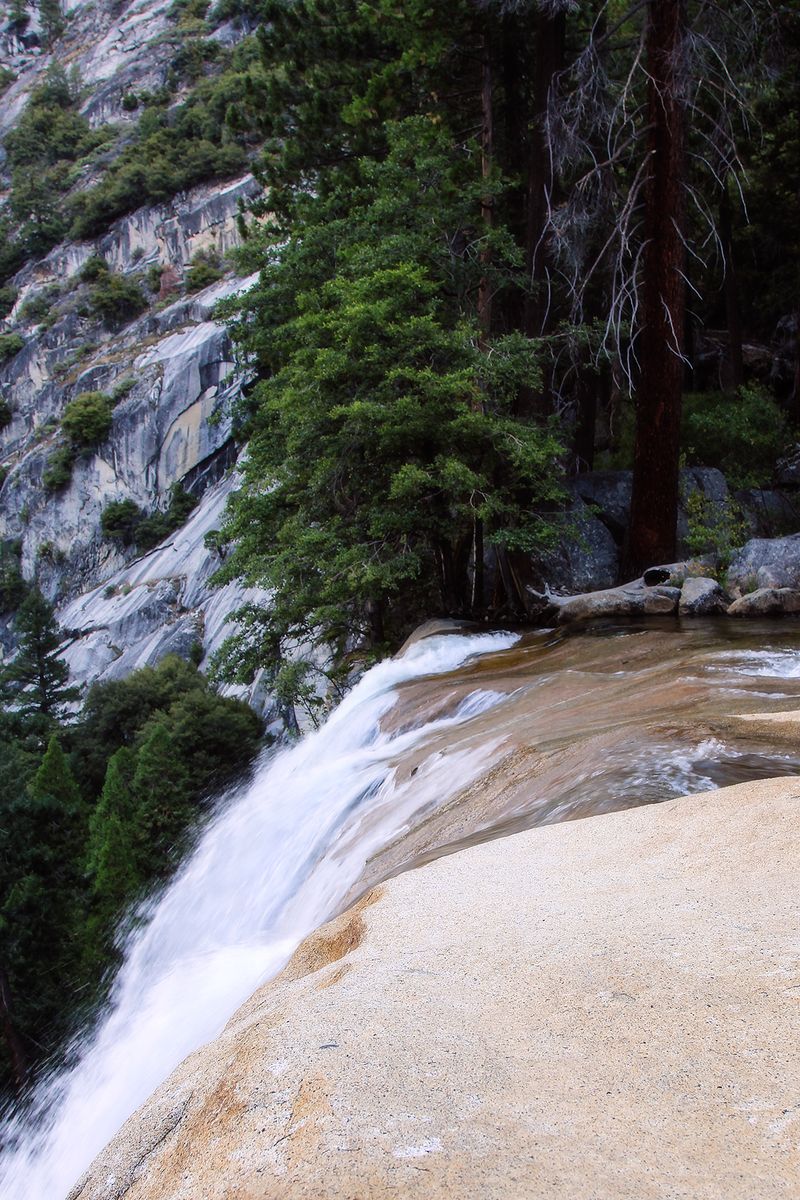 I wanted to sit where water usually fell, but we had so much trail left to go that I didn't take the time. (I wish I would have.)

After Vernal Fall, the trail leads to the top of Nevada Fall, and it is strange to me how entirely different this section felt. The black and green was behind us, and the bridge took us over the Silver Apron, and "silver" seemed the right word, even though the stone was more golden. 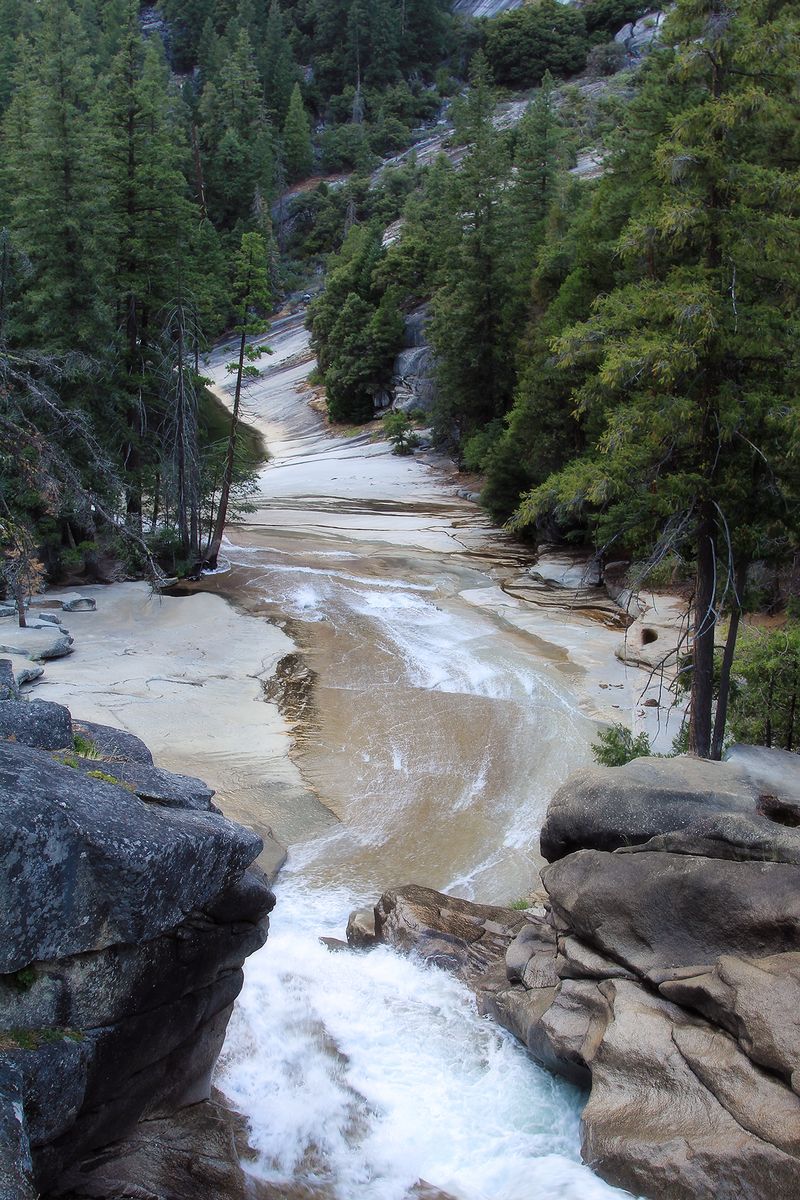 Silver in the sense of: the color that rushing water takes, or the way that silver seems full of blackness, despite its white light, like the way the stone is streaked with black ribbons where water—in that rushing color—used to fall. Despite the fact that my mind insisted on playing the music from The Last of the Mohicans in my head, what my ears were filled with as I climbed—steps and boulders and sometimes just instinct—was that sound, the booming hiss, of falling water. I love that sound.

I got to the top of the fall first out of our group, so I sat on a tree trunk and hoped this was my Moment: a few minutes of solitude with just the sound of my quieting breath and the falling water. But Yosemite anywhere in July is not a place for solitude: nine other hikers, and then a long trail of mules led by a horse and rider, and then more hikers, and the bathroom and the line for the bathroom and then my people and, aside from a Stellar jay landing almost by my hand and squawking at me, there was no Moment. (I was glad for the bathroom anyway.)

After another series of uphill switchbacks, we walked through the Little Yosemite Valley, 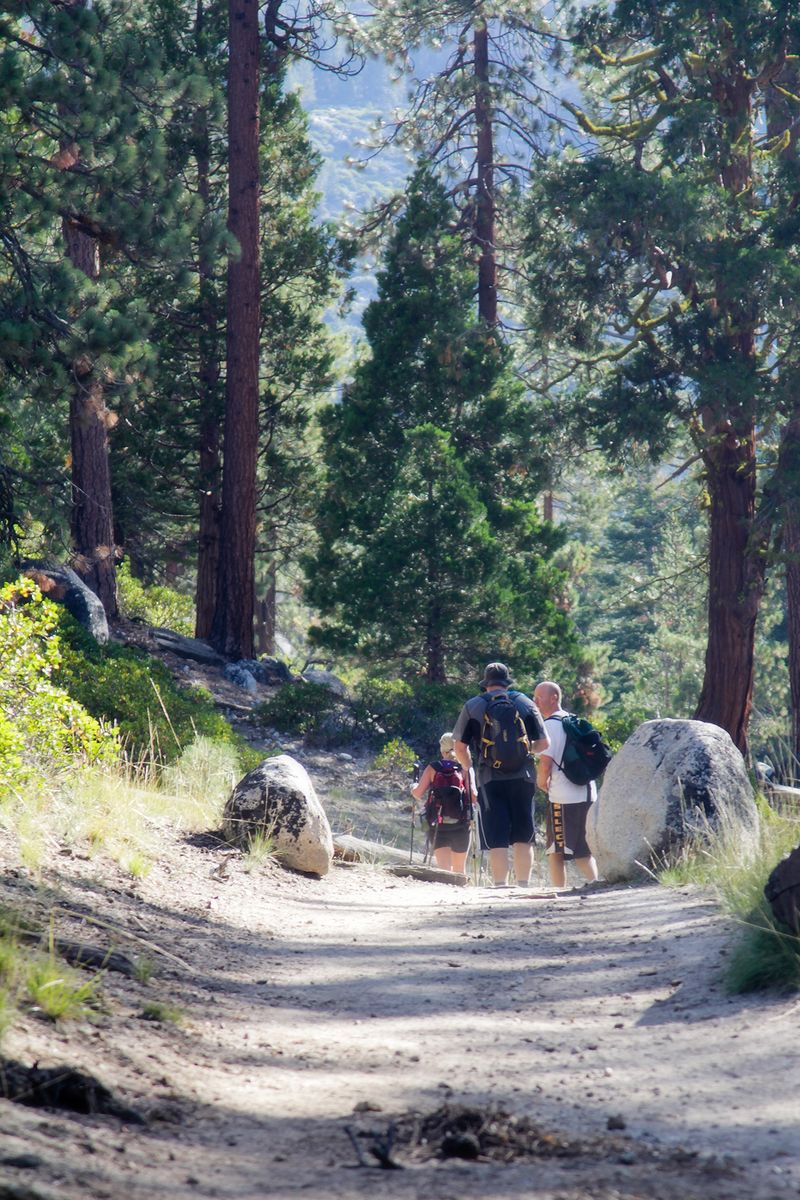 which is mostly flat. It felt and looked different than I imagined, hotter and dryer (I had a wide, flowery, cool meadow in my head). Sandy, and silent: the water in the river seemed to hardly move at all. 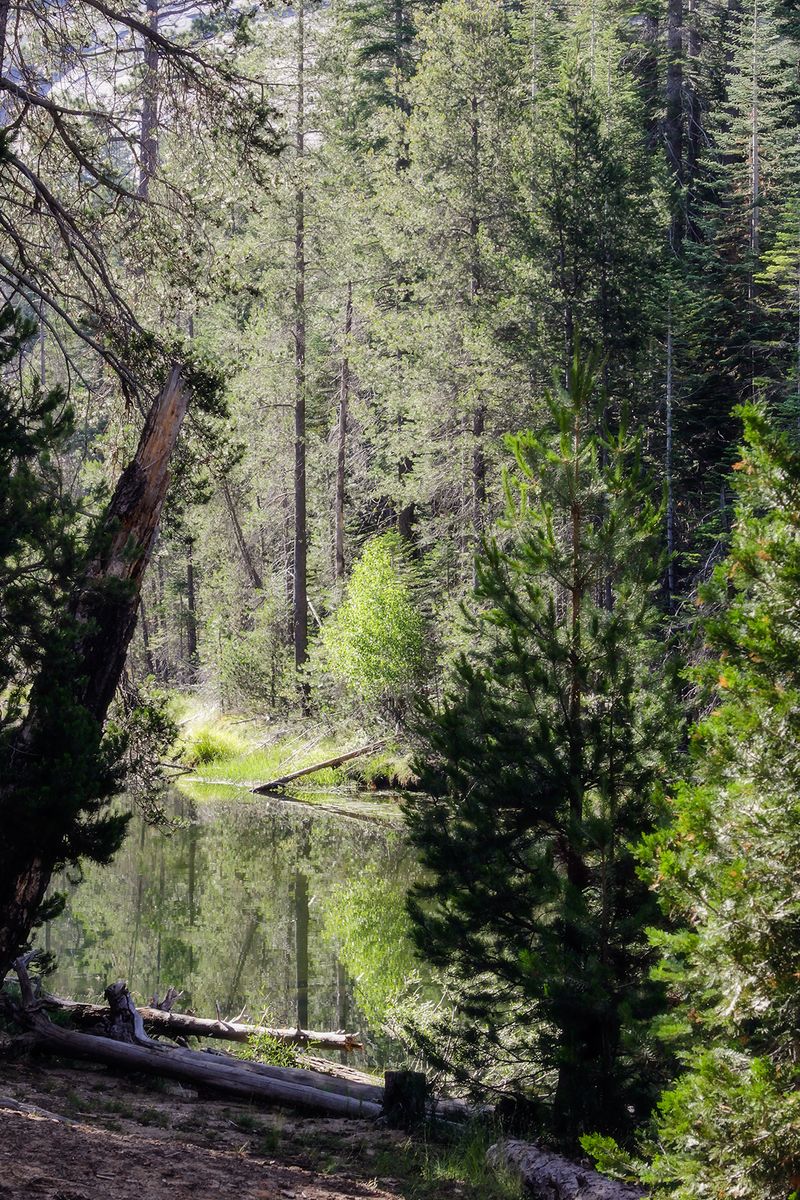 Then the trail turned left, to a long section through piney woods. I loved this part of the trail; it was steep but not aggressively, and the wild scent of trees and dirt on the breeze was invigorating. I was fascinated by the moss on the trees (that doesn’t happen in Utah). 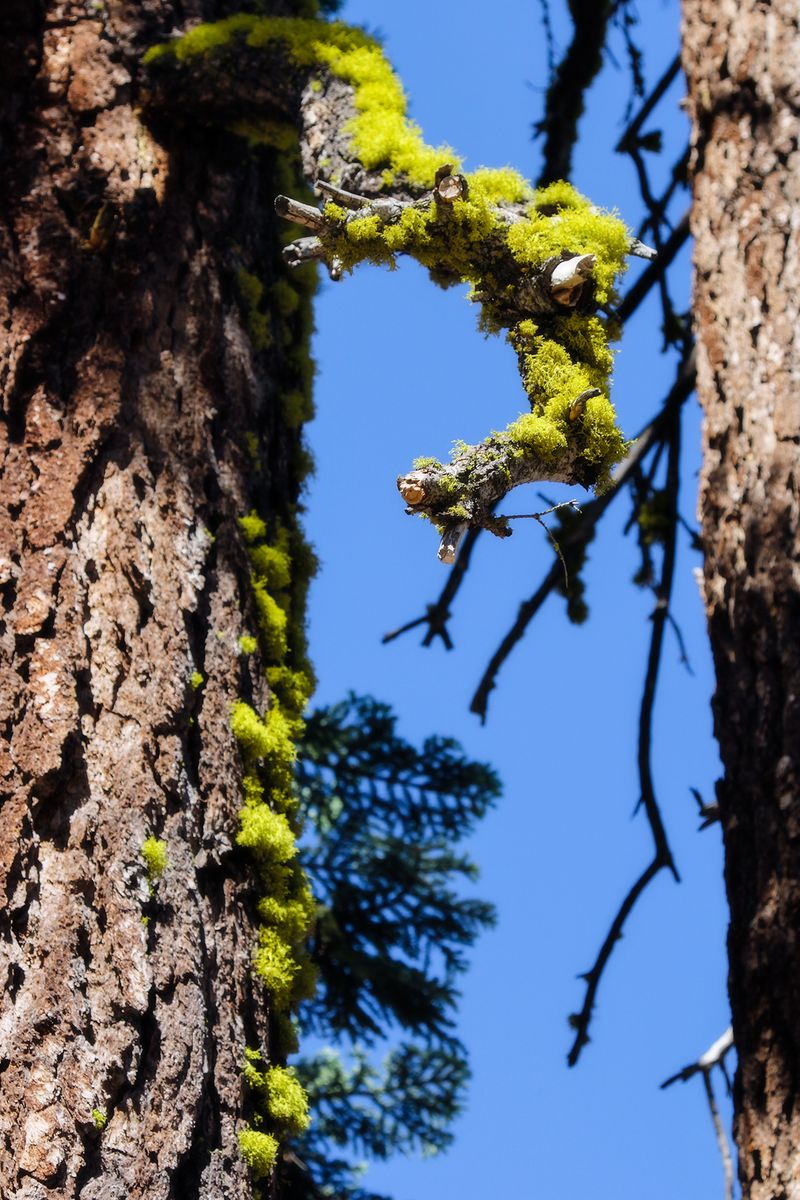 We leapfrogged with another hiking group, making temporary trail friends. One of them saw a bear cub near this tree, so we lingered awhile to let it find its mother. 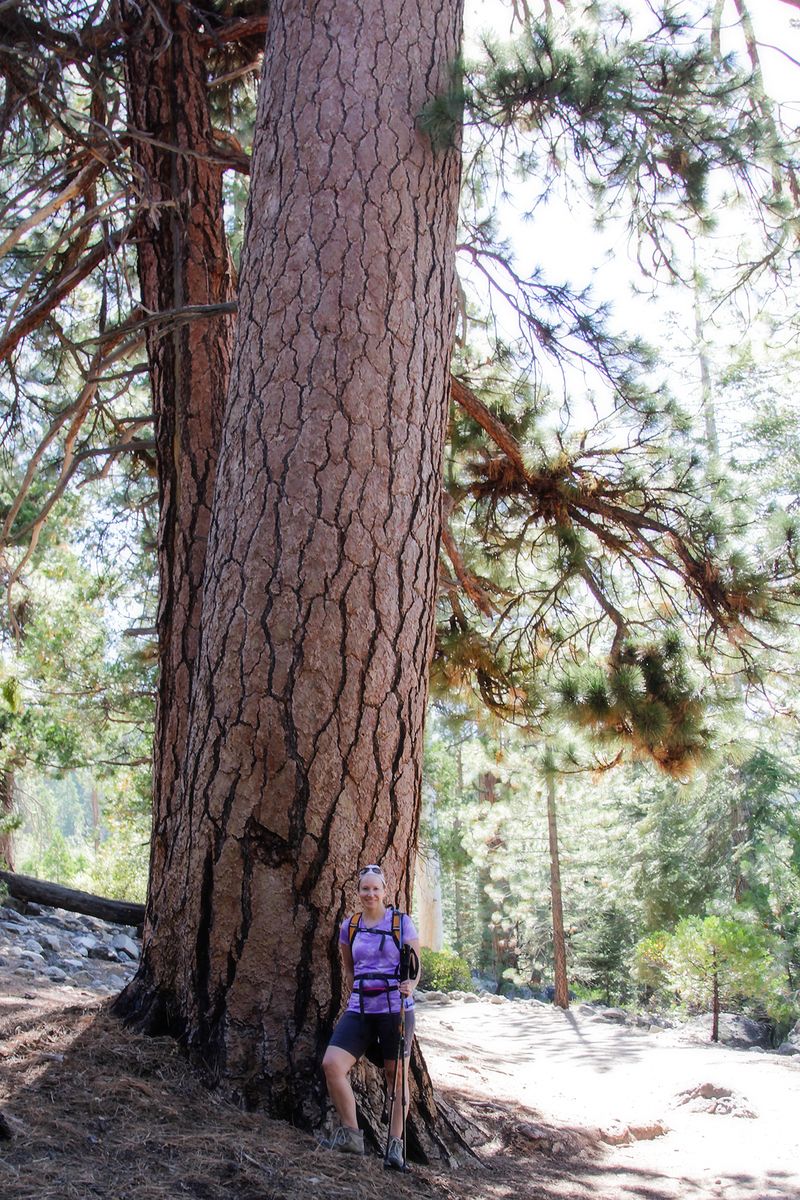 I could sense rather than see when the summit of that slope was coming, and then there was a sharp switchback, and we had our first up-close view of Half Dome: 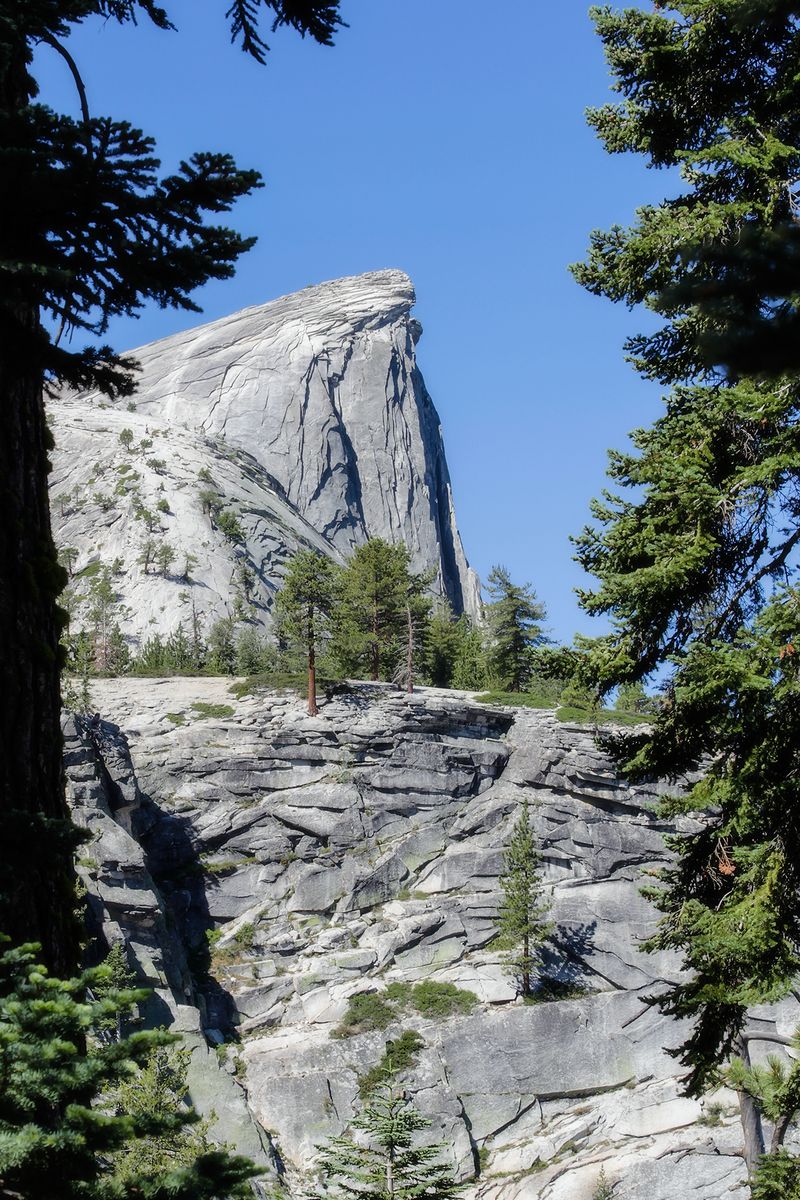 All of those terrors kept at the back of my mind during the rest of the hike came forward. Here’s a truth about me as a hiker: while I’m not afraid of heights, I am afraid of steep down hills. As my hiking partners assessed the dome, and wondered how it was even possible to get up the sub dome section (the hump just above the middle of the picture, on the left side), let alone those cables up to the top, I was already afraid of coming down the sub dome.

As we walked the rest of the way to the sub dome (where there is a ranger who checks to make sure you have a permit), all the conversation was focused on the cables. I was silent, because my fears were different. I wasn’t afraid of the height, or of falling. Instead, I was afraid of not being strong enough. What would happen if I got halfway up and my puny arm strength vanished, and I couldn’t pull myself up or haul myself down?

The sub dome was hard. It was steep rock scrambling, with steps some of the way 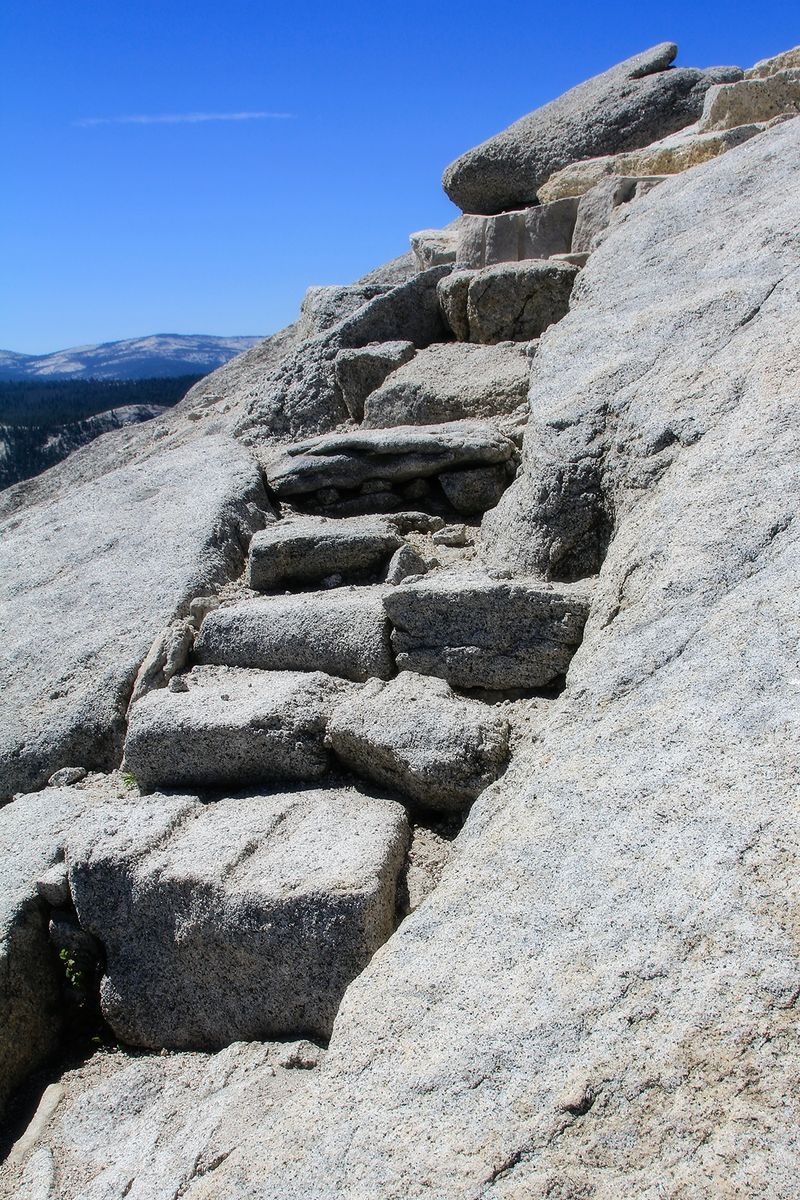 and with a find-your-own-way section where I immediately went the wrong way and hiked myself into an impossible spot. I didn’t dare take the enormous step I’d need to (up onto the next slab of granite), so then I had to sit down and back track via butt and hands. Then I let Kendell lead, which was OK because I lead him up the cables.

Kendell is afraid of heights. He told me later that he wasn’t sure until the very second he started climbing the cables whether or not he’d do it. 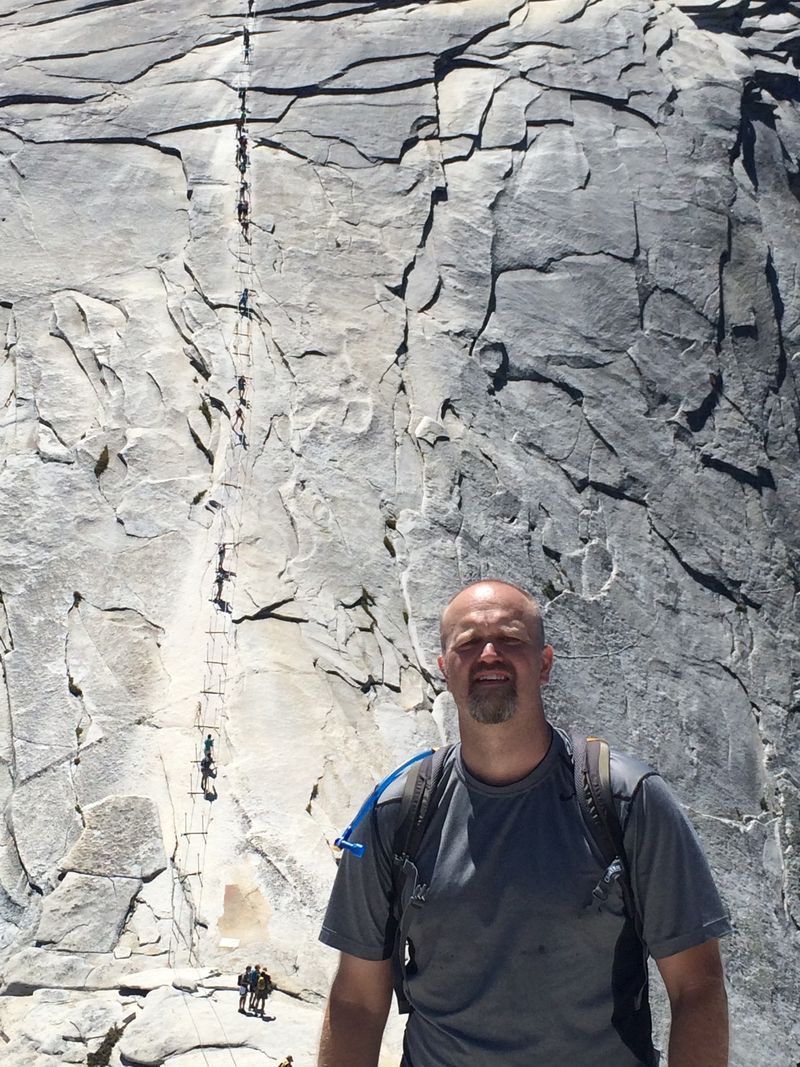 After talking to every person there, and adjusting our gloves and taking some pictures and drinking some water, I couldn’t talk about it anymore. I just started up. And a few minutes later he followed.

Going up the cables was nothing like I had expected. I had thought it would be like a really intense arm workout. But instead, it was a full-body experience, cardio and muscle, every part of my body, not just my arms. The stone was slippery from so much use. I found myself wanting to go as fast as possible, not out of fear but just to see if I could. On the cables, at almost each set of poles, there is a 2x4 nudged up against the poles. Sometimes I’d stand on the wood, and huff and rest a bit. I looked around and I said out loud: I am here. Other times, I’d look up and make sure no one was too close above me, and then I’d just keep going. Sometimes I’d look down at Kendell and shout encouragement. I really wanted to take a picture, right in the middle, but I wasn’t sure I could manage gloves, camera, my grip on the cable, and still keep my feet from slipping. (Now I wish I had tried.)

It is both steeper than it looks, especially as you get to the second half, and not quite as hard as I’d imagined. 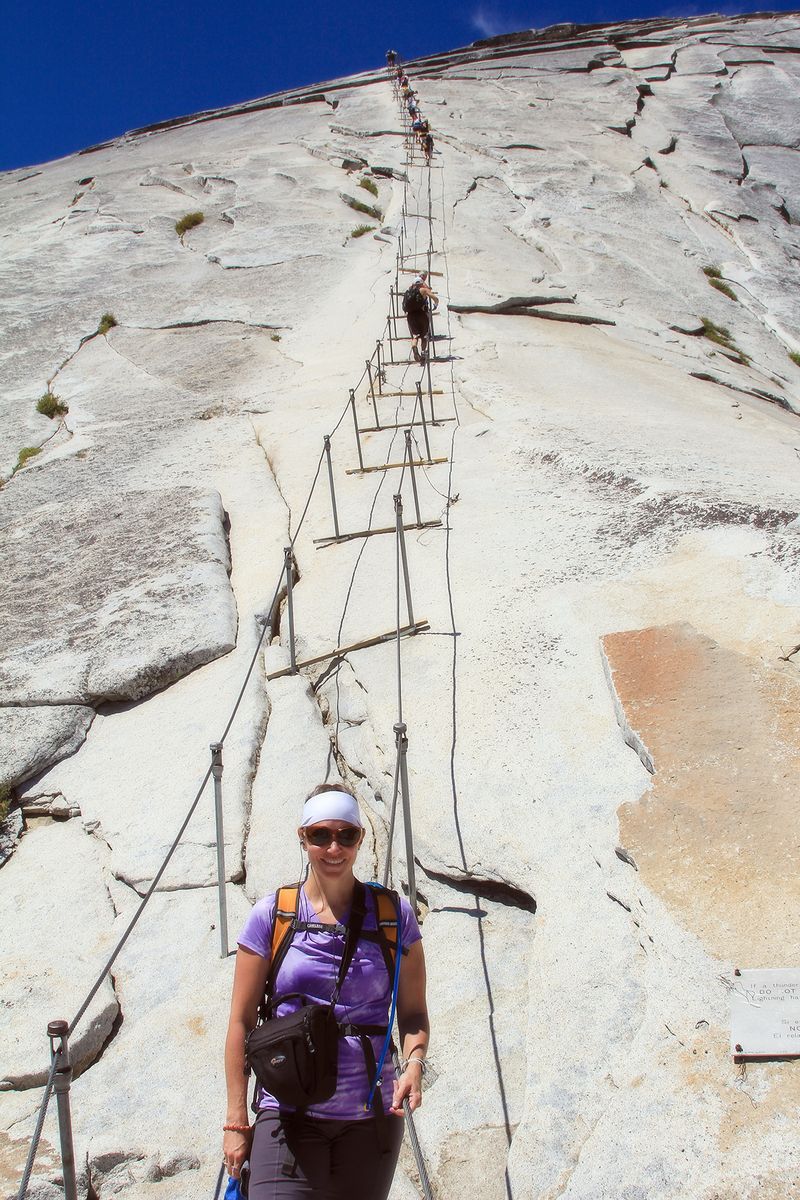 Despite my worries about being weak in my upper body, the hardest part of the cables for me came at the spots where the route met with the edge of a slab of stone. Looking up, they don’t look like a big deal. When you have to take that three-foot step up? It was hard on my weak ankle. (It’s throbbing right now while I remember.) It didn’t matter if I lead with my left or not…it was complaining. At each giant step, I took a deep breath. I hoped my supporting leg didn’t slip. I ignored my ankle’s thrumming and then I stepped up. I kept going, hands and arms and back and legs moving and pulling, and I made it: to the top of Half Dome. 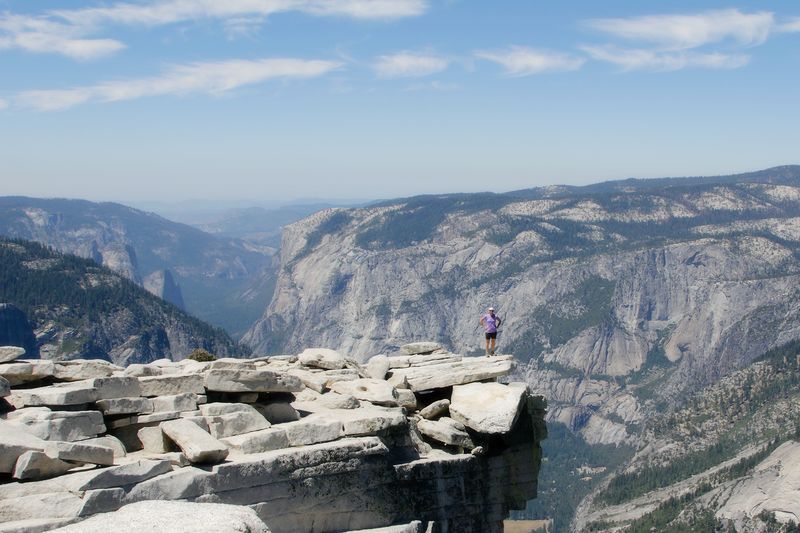 (coming next: the rest of our Half Dome story.)

I was just imagining you and I standing in the line for bathroom, and the conversation we would've had. I'm glad you made it to the top!! It looked amazing!

Yaaaaaaaay!!!!!! This makes me so happy, like, almost teary happy. Yay, yay, yay.

Step away from the edge! Most of the way through this post I was enjoying the beautiful photos and how you write about hiking and I was thinking, "I wish I were a hiker". Then when you went up the cable part, I changed my mind! And I can't even look at the picture of you standing on the edge of nothingness!
But I will stay tuned for the rest of the story. And since you wrote the post, I assume that you didn't fall off the edge. Whew.