Throughout November, I’ve been working on scrapbook layouts about Thanksgiving. I printed about seven years’ worth of the very best Thanksgiving photos and set to work. It’s been interesting scrapping Thanksgiving like this. I’ve noticed patterns and discovered several last-ofs and first-ofs that I don’t think I’d have noticed otherwise. I also realized that I don’t really take a lot of photos on Thanksgiving.

I decided to rectify that this year. I was going to take some very specific photos. I wanted a picture of my mom holding an apple pie, because she usually makes them. (I made ours this year because she broke her hand a few weeks ago and wasn’t able to cook very much at all.)

I wanted a photo of Becky with her sweet potato dish (or is it yams?) because she introduced it into our family traditions and now it’s something many of us look forward to, even though we didn’t grow up with it.

Maybe, if I hadn’t been too embarrassed to ask someone, I wanted a picture of me holding a basket of Thanksgiving rolls.

I wanted a picture of me with my mom, sisters, daughter, nieces, and great nieces.

If I could get them to cooperate, one of all of the husbands, because marrying and putting up with Allman girls (however far descended from the “Allman” part) is an adventure they’ve all so far survived.

One of all of the cousins with my mom.

One of the food table, especially because I planned on bringing my Hall’s Jewel Autumn Leaf bowl that belonged to my grandma, and I knew it would feel like I had a little part of her with us there.

One of the dining table, with everyone eating. 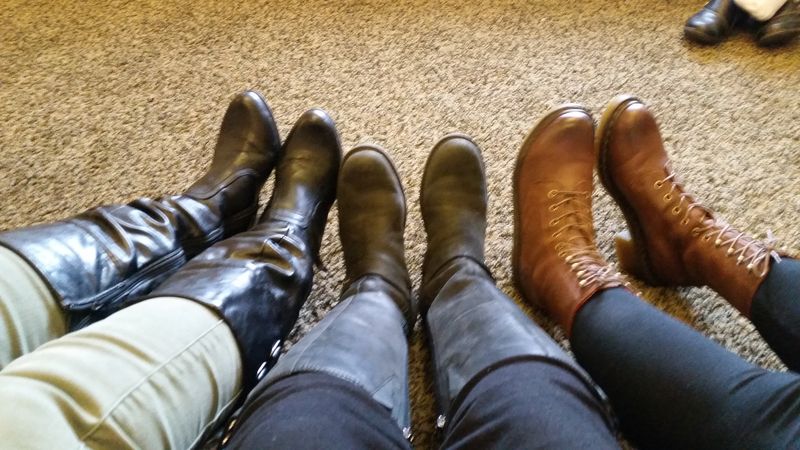 Which is a fun, albeit a little blurry, one of my mom, me, and Haley in our boots. (Actually…Haley’s wearing my boots in that photo, so 2/3rds of the boots are mine!)

And this one of Haley being the little-girl whisperer (in a non-creepy way): 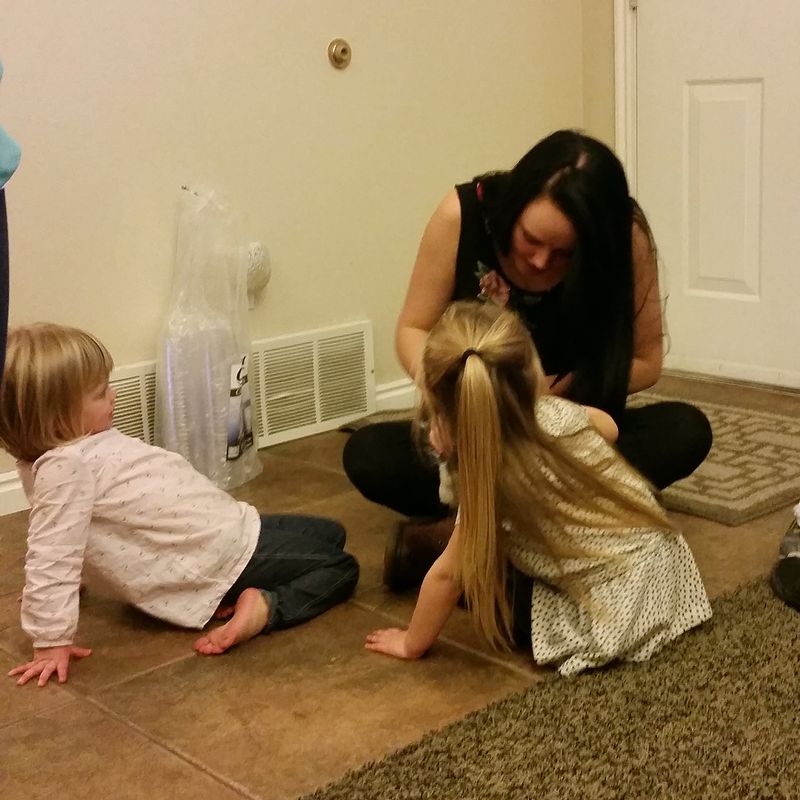 (she was holding Suzette's cat, which is the friendliest cat I've ever met, and her little cousins Josie and Oakley couldn't resist.)

Kaleb eating with his cousin Oakley 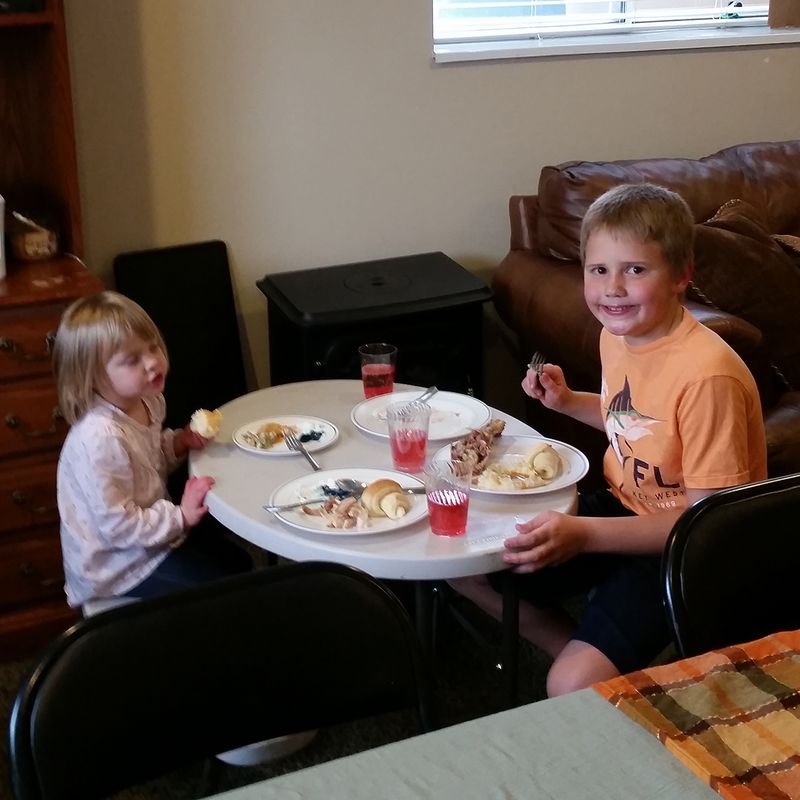 An awkward one of me and Jake, wherein my head and face look enormous: 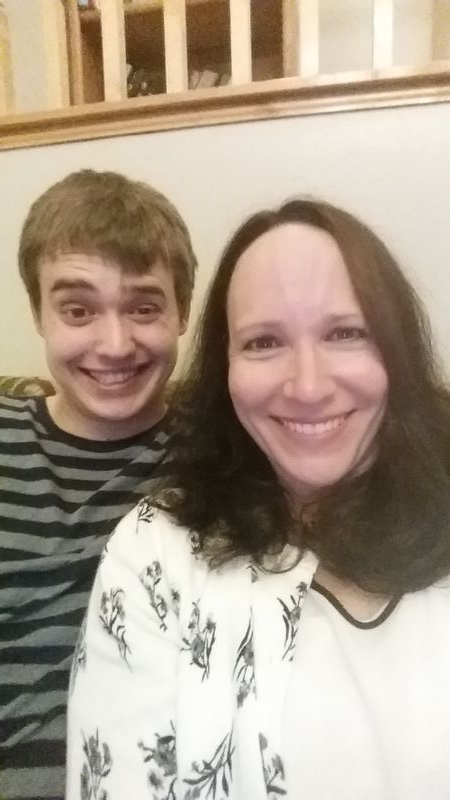 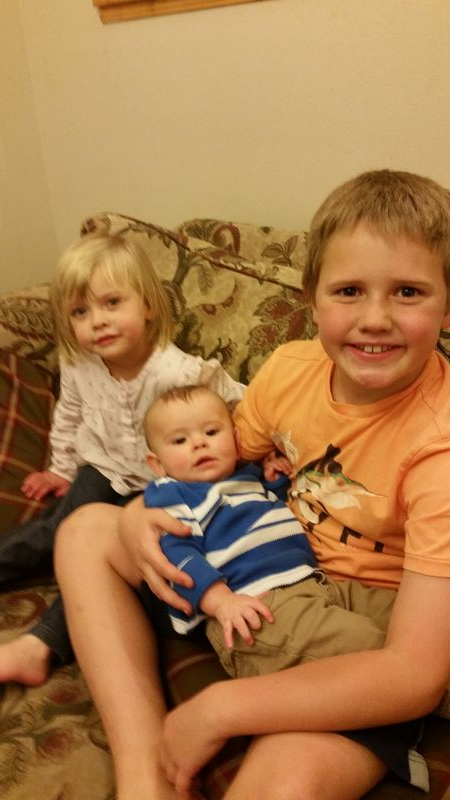 And a cute, irresistible baby: 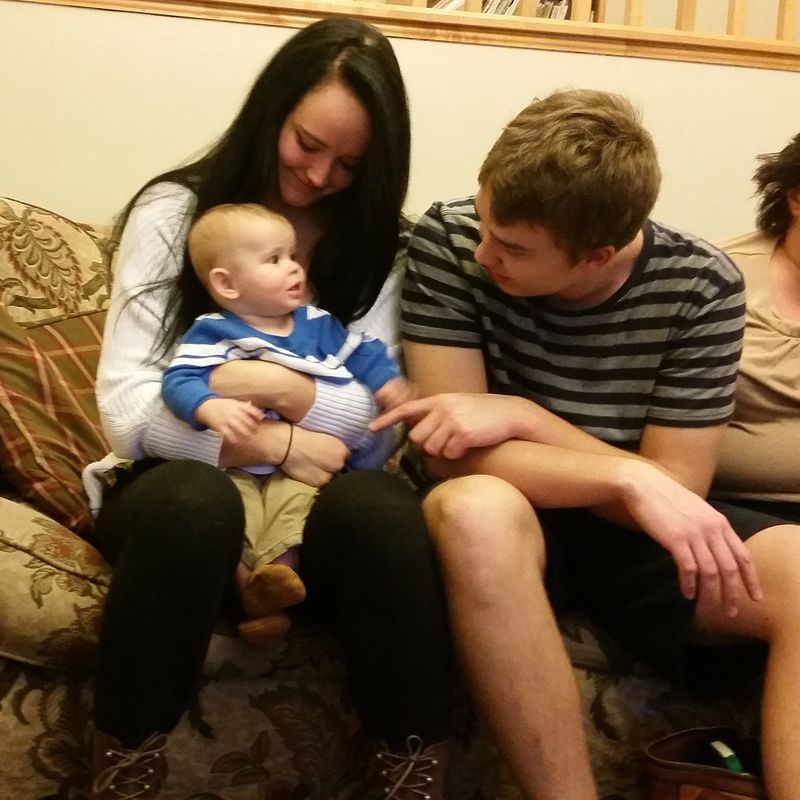 And, yes, one of everyone at the table: (And exactly zero of Nathan, who left before we cut the pies to go stand in line with his dad at Target, a choice I was not happy about, btw.)

All of them pretty awful cell phone pictures. I didn’t get any of the photos I wanted because I optimistically took my camera in to be repaired less than a week before Thanksgiving. Of course it wasn’t fixed in time! So I only had my cell phone to take pictures with, and I confess: those of you who only take pictures with your cell phones are a curiosity to me. It drives me nuts. I’m not sure anything frustrates me more! I know that, for a cell phone, they are OK. Much better than other, older cell phone pictures. But, call me a camera snob if you must: I’m used to the flexibility of my DSLR. I can make it do what I want.

So, I got exactly none of the photos I wanted.

(And Becky: that isn’t a guilt trip. It’s my own fault. I could’ve taken my camera in for repairs at the beginning of October.)

I know: there will be other Thanksgivings. But never this Thanksgiving, with all of my kids at home with me. With this family make up, the way it is right now. I’m terrified that it was my last Thanksgiving with my mom. Terrified. With everyone healthy and happy (as we ever are) and together.

So much could happen in two years.

So, since I don’t have images, some words about this year’s Thanksgiving:

I just searched so I could answer my own question: 8. I used the word “happy” eight times in this post (not counting that last use). I think it’s a good way to sum it up: despite the pictures I didn’t take, it really was a happy Thanksgiving. I hope yours was, too!

I love that it was a happy Thanksgiving! It was for me too. We all had such a good time.

I'm so sorry about the camera fail. I usually check that sort of thing! But I like the pics that you did get. They might not be perfect, but they still capture the memory.