I’m not entirely sure what fascinates us with end-of-the-world scenarios, but they are so popular right now. The post-apocalyptic world draws the imagination because it is rife with imaginative possibilities—what happens in a contemporary world that is nearly void of people? But it is that combined with the simultaneous possibility of threat, terror, sorrow, fear, loneliness…

It is one of my favorite genres.

Last week I finished the book Station Eleven, which is post-apocalyptic near genius. 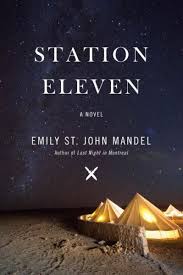 It opens at the very beginning of the pandemic that will kill 99% of the world’s population, in a theater in Toronto where Arthur Leander, a famous actor, is performing as King Lear. It is his last performance, as he has a heart attack. Jeevan Chaudhury, an EMT in the audience, rushes up on stage to try and save him, and Kirsten Raymonde, a child actress playing the part of a young Cordelia in Lear’s mad vision, watches in horror as her grandfatherly friend dies. The plague starts to break that night.

The death of Arthur at the start of the novel is a sort of framing device, as many of the characters in the novel are either present at his death (Jeevan and Kirsten) or part of his story and thus part of the novel. It is a non-linear plot line, moving back and forth between Arthur’s story (how he found both success and emptiness through acting) and Kirsten’s (set fifteen years after the Georgia Flu epidemic). Kirsten is part of a traveling theater troupe, which moves between the small villages near where people have started trying to live together again, and it is her story in the post-apocalyptic world that carries the most drama.

This might just be my favorite 2014 novel. I loved nearly everything about it, which is saying quite a bit as I generally avoid books about famous actors, real or otherwise. I am not enamored with Hollywood and I don’t think very highly of most actors (not because of their creative abilities but because of the obscene amounts of money they make). But this wasn’t a Judith-Krantz-style Hollywood novel. Arthur himself seems to grapple a bit with his reality of having achieved so much fame and wealth, along with the conundrum of finding himself lonely anyway. Part of the story is his first wife’s, Miranda. Not needing to work after she marries him, she keeps herself busy by working on her graphic novel, Station Eleven, which is a sort of sci-fi, end-of-the-world, alien-large seahorse mashup that she only eventually self-publishes. Kirsten ties them together because she has one of the self-published copies. It is one of her greatest treasures, even though in all of her travels she hasn’t found anyone else who has heard of it.

I love it when books have that many layers. True, it makes it harder to gain a deep affection for the characters, as really, you’re getting less story overall. But what the author does here, how she ties things together and how each character’s story influences the others in way none of them can see, makes the characters deeper anyway.

It is a book that imagines the post-apocalyptic world in precise ways, how things are repurposed and the way the survivors come to making attempts at a “normal” life. It questions the purpose of art and creativity. It asks if the contemporary world is one that deserves being remade or if something different might be better. It makes you wonder about how your present has been influenced by your past, how the seeming-small choices changed everything, how we connect. I will be thinking about this for a good, long while.

But, in the way of all personally-influential books, it held an idea I did not expect. (I don’t usually share such long quotes, but stay with me as it is worth it.) One of the characters, a man named Clark who had been the closest thing to Arthur’s best friend and a confidant to Miranda after he cheated on her, has become a sort of curator of things from before the plague. He lives in an airport, and is looking out the window at all of the grounded planes (which have since been made into houses), thinking about his luck:

…not just to have seen the remembered splendors of the former world, the space shuttles and the electrical grid and the amplified guitars, the computers that could be held in the palm of a hand and the high-speed trains between cities, but to have lived among those wonders for so long. To have dwelt in that spectacular world for fifty-one years of his life.

This idea hasn’t let me go. Think about it: in all of the history of humanity, there was an unending amount of suffering. Hunger, cold, heat, discomfort. Thousands and thousands of years of the primary concerns being food, shelter, warmth. Then we, this contemporary version of “people” we’ve invented, discovered all we have, and changed the world. Changed the world in harmful ways, but also changed ourselves. Everything, nearly, that has been hard for humanity has been solved, or at least the big stuff. We have light and warmth in winter, cool air in summer. If we want to travel to Italy it takes half a day of uncomfortable airplane hours. If we want to talk to someone, it doesn’t matter how far away they are. If we are hungry there is food everywhere.

And we just, you know, live here. In this miraculous time without really paying attention to any of the miracles.

So my gratitude today is twofold. One, I’m grateful for books. Reading and those moments when you read something that utterly changes how you think about the world, books in that sense. But also books in their entirety of creation—the writers’ energy, the agent’s dedication, the publisher’s willingness to take a risk. The printing press. Paper. Artwork for covers. Ink. Fonts. Think of all of the technology it takes to make our modern books! I’m grateful for all of it.

Second, I’m glad to be alive right now. And I’m going to pay attention to the miracles I might otherwise overlook. So even though Thanksgiving and November are past, and I failed fairly miserably at my gratitude countdown, tonight I want to write down just a handful of contemporary wonders I am especially grateful for and would miss desperately:

1. Hot water. And all it entails: a clean body. Clean, fresh-smelling hair. No dirt under my fingernails. Also, the relaxing warmth of soaking my back in the tub. And the rejuvenation that comes when you sit in the tub until the water goes cold, reading a good book. Plus, have you ever seen what happens to me if we run out of hot water and I have to take a cold shower? The billowing anger that erupts out of me startles myself. I love, love, love hot water.

2. Toilet paper. I mean, really. Maybe it is the most significant invention of contemporary times. What does one do without it?

3.  Air conditioning. Being hot makes me grumpy. If I had to live through summers without air conditioning I would be a lonely, lonely woman. Lonely and hot with no one left to complain to about how hot I was.

4. Heat.Being able to say I love winter is sort of a luxury. You can only love winter if you always know you have a warm place to retreat from winter. I love winter because I love watching it snow, because of coziness and the slower days, because of hot chocolate and scarves. But, you know: I hate being cold. I can’t even deal with cold. I shiver and I get cold so easily. Having a house and a heater makes loving winter possible, and it really is miraculous if you didn’t understand how a person could flip a switch and make hot air come out of vents.

5. Costco. Think about it. Think about all of the work and technology and transportation that has to happen for a functional Costco. (Or any grocery store, really.) (I’ve had conversations with my kids about how, if the zombie apocalypse happened right now, we’d be glad we were at a Costco.) If we need anything—milk, eggs, butter, cheese, bread, those delicious lemon almonds they sold last December that I still can’t stop checking for every time I go—we just, you know, go to the store. We don’t have to hunt, butcher, pluck, wring necks. We don’t have to plant seeds, wait for them to grow, harvest, and store. We just drive to Costco and put stuff in our carts, and complain if they line’s too long. (It’s really pretty ridiculously wondrous, isn’t it?)

Near the end of the novel, Kirsten has an experience that makes her think, “it is possible to survive this but not unaltered.” That’s sort of how I felt about Station Eleven. I survived it, grinding through the tense moments with the fear that someone would die—but it altered me. I have felt especially grateful, after reading it, to be alive right now, in our age of wonders that are so marvelous we can’t even see the magic anymore—we take it for granted. The book has made me remember to stop and notice and fully appreciate them.

I loved this post and it made me stop and appreciate the things I take for granted. Especially the grocery store piece. I am so blessed to have access to good food and yet I moan and grown (and feel guilty) if I'm tired and the groceries are heavy and the lines are too long. What a tiny price to pay considering what I get in return. You really do a good job of getting to the very heart of the matter. You should be a writer....oh wait, you already ARE a writer! :-)