We had a family dinner today to celebrate my niece, who came home from her LDS mission last week. My sister-in-law asked me to bring soup, so I made a big pot of cream of broccoli. When we all got home, Kendell and I had to run back out again, and when I came home from our errand, I found the pot—which had quite a bit left—like this: 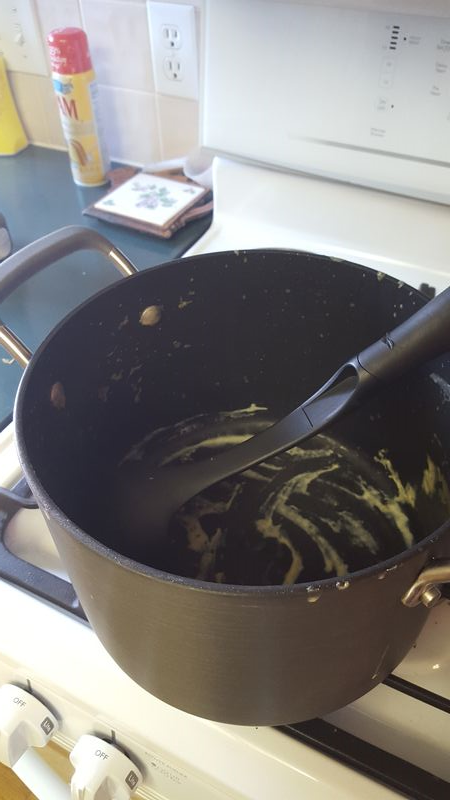 Guess those teenage boys “put it away” in their bellies instead of the fridge!

My mom used to make cream of broccoli soup when I was a kid, but she put little noodles in hers. I loved it, but the one time I put noodles in mine, my kids freaked out. They did not like it! So whenever I make it, I pause for a second and wonder if I should try it with noodles again. I never do though. It’s still delicious! Here's how I make mine:

Cream of Broccoli Soup (for a crowd…adjust proportions if you want less, but it makes good leftovers!)

Measure the milk/cream/half & half in a large measuring cup, and let it sit out for about 30 minutes, until it is no longer chilly. (This keeps the milk from curdling later. If you forget to set it out, just put it in the microwave for 3-4 minutes.) Steam or boil the broccoli until crisp-tender; save the cooking water. In another pan, melt the butter and then sauté the onions; let simmer until soft and translucent. Sprinkle the flour over the butter and onions, then stir until the flour is incorporated into the butter. Then keep cooking for another 3-4 minutes over medium heat. Pour in the chicken broth, whisk until creamy, and then bring to a boil. This mixture will be fairly thick. Once it is thickened, pour in the milk. Stir over medium-low heat until heated through, almost boiling but not quite. Add the chicken base, black and white pepper, garlic powder, and onion salt. I totally don’t measure the spices, I just keep adding until it tastes right. The chicken base is pretty salty, so start with about half a tablespoon and then add it in smaller amounts. While the soup is still hot, add some cheese. Again…I don’t measure how much, just add some handfuls until it tastes like you want. (I want mine to taste more like broccoli, with a hint of cheese.) Let simmer. Meanwhile, pour the steamed broccoli into a strainer, reserving the liquid. Pick through it to find any pieces of stem and whatever bigger florets you have, and put those in the blender (about 1 ½ cups of broccoli and 3/4 cup of broth) with some of the left over broccoli cooking liquid. Process those until they are completely smooth, then add to the soup and stir again. (Or use an immersion blender. I don’t have one!) Chop the rest of the broccoli as small as you like (I do mine pretty fine, but also try to leave some chunkier pieces for Kendell to find), add it to the soup, and then make sure it is heated through again. Taste and adjust spices. If it is thicker than you like, add more cream, half & half, milk, or broccoli broth.