Wait—who says that? Who could hate summer, with its flowers and its break from school and its long days of lingering sunshine?

OK, maybe hate is too strong a word. Dislike. Am made uncomfortable by. Have a complicated relationship with.

I mean, it's not the kind of negative emotion I have for Valentine's Day.

Or even Mother's Day.

It's just...well, summer is my least-favorite season. Even though I love so many things about it: yes, the flowers, but also running that's rarely interrupted by weather, hiking, summer vacations, green everywhere, late-afternoon thunderstorms, mowing the lawn, backyard barbecues. 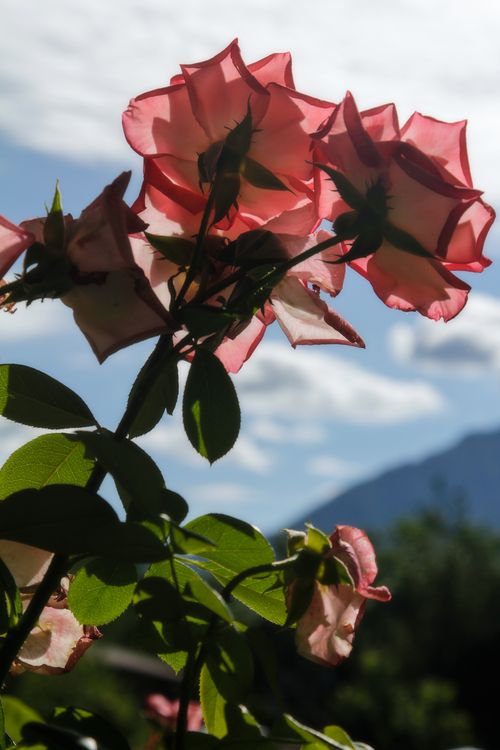 I love all of those things.

But sometimes the things I don't love about summer outweigh what I do. Namely:

1. Shorts. Seriously. I have been shopping for my entire adult life for shorts I look good in, and I have never found them. The length doesn't matter—what matters is that my thighs look enormous in shorts. There's something about pants that balances out my disproportionate quads (just a little...I am always self-conscious about my legs) but in shorts they just look awful. And this isn't limited to regular, every-day shorts; it's also a problem with running shorts. You know those tiny little swishy running shorts that most runners wear? Yeah. Those don't work in my thigh-touching world. But running shorts with any sort of looseness also look pretty awful on me. Like I'm an escaped junior-high PE teacher. It's kind of strange, but true: the only running shorts that don't look awful on me are the tight ones. The tight long ones.

2. Short sleeves. Nope...my summer clothing disagreements are not limited to shorts. The older I get the more aware I am of my chubby arms. In every other season I can manage this self-consciousness with one of my favorite clothing items, the cardigan. But even I (with my body's occasional inability, due to my unhappy thyroid, to properly manage my body temperature) can't go around in cardigans all summer.

3. It's hot. I don't like being cold, either. (Apparently this post is devolving into one big whine-fest.) But I have a tendency to be emotionally effected by the heat. And not in a good way. Translation: I can turn fairly quickly, in a hot room or building, into a raving psychopath. (It’s not as bad outside.) Being hot makes me grumpy, and it's usually not reversible like being cold is. You can always add layers but there are only so many clothes you can take off.

4. Hay fever. This isn't a problem every year. For reasons unknown (but which I could probably uncover if I went to an allergist), some years are really bad and some years I never sneeze once. This has been my worst hay fever summer for five or six years and I am not happy to be so forcefully reminded of how miserable the sneezing and the constant throat tickle and the always-burning eyes are. What makes it worse is I can't function if I take hay fever meds. Even the non-drowsy ones turn me into a sort-of living zombie. I did have a little bit of success the year I tried Singulair. No itchy nose or raspy lungs. Unfortunately it made me bawl. Random, unpredictable crying. Not as bad as Prednizone but close.

5. Swimming. I don't mean swimming in nature. But, you know, putting on a swimming suit and sunscreen and finding the goggles and the snacks and the beach towels and then going to a swimming pool. My kids love it (well...Kaleb still loves swimming. Jake & Nathan only want to do nothing. See #6.)  and I just...don't. I can remember loving it, especially the long afternoons Becky and I spent in the pool at the Landmark casino in Las Vegas. But now that I'm grown up, swimming annoys me. It has more than a little to do with the same reason I hate shorts (chubby thighs). Maybe if I had the slender legs of women whose thighs don't touch, I'd also love swimming. (And really. Don't even get me started on swimming suits. The one part of my body that isn't chubby is the only part I wish were, as well as the part that swim suits try to emphasize. If you have any. Which I don't.)

6. The kids are home. OK, that sounds even more awful than saying I hate summer. I love spending time with my kids, and I love having them around, and I love that we don't have to worry about homework, grades, exams, forgotten projects. But Bad Mom syndrome starts setting in pretty quickly—it flashes up when I realize all that they've mostly done with entire days is watch TV, play video games, and eat snacks. (This article pretty well sums up what I mean. Really. If you're a mom with kids at home, you should read it. I'll wait.) And argue with me about the jobs they don't want to do. All of my Mom Failings are highlighted in the summer. At least for the rest of the year I make sure they, you know, go to school 'n stuff. I want to be one of those fabulous moms who has tons of activities planned for her kids...but usually that involves swimming. And, let’s face it: the teenagers don’t want to do anything else. They don’t want to go to the pool, the zoo, the mountains for a picnic. They’d rather nah. So then I feel bad that they don’t want to do anything, and I feel bad for not making them or I feel bad FOR making them, and I feel bad for Kaleb who ends up doing less stuff.

7. Sunburns. I used to love lying out in the sun. Used to, when my skin had the capacity to get brown. Now it just burns and peels, burns and peels, in an unending cycle that's only punctuated by the weird even-whiter dots I get instead of a tan. True, I do​ love peeling. Except, I don't love worrying about skin cancer and wrinkles.

8. Miscellaneous annoyances. Bugs! (especially mosquitos, which love me, and flies, which I detest.)  It's too hot to cook my favorite meals. Traffic—one of the reasons I'm not a fabulous mom with tons of activities planned is that everyone else is also going, and the older I get the less I can deal with lots of annoying people everywhere. The electricity bill (hate it though I do, I'll happily pay it. Probably my neighbors and/or friends would be willing to pay it if I refused, because the cost of air conditioning is so much more bearable than a grumpy Amy). The untenable process of blowing your hair dry after a shower and even though you're paying a $*(#&$ fortune for air conditioning it is apparently no match for the heat of your blow dryer, which never seems to dry a damn lock of hair because the water from the shower just gets replaced with sweat.

As I wrote my list, I realized something: most of the things I dislike about summer are things I wish I could change about myself. Or maybe just accept with more grace. Maybe, in the end, that’s the reason I don’t like summer: it forces me to see more clearly my faults. They’re easier to overlook in the other seasons.

Summer is my least favorite season also. I have no energy in the summer and I sometimes feel depressed (which is not my normal state). I am always so glad for fall.

I'm a pretty big fan of fall and early spring. Not freezing, but with a definite crispy cool in the air.

Also, do you wear skirts in the summer? Knee-length cotton or knit ones that are cool and comfy and flattering?

Reading some of this makes me really grateful for my Mom and her self-acceptance. She didn't have a perfect body, but she never fretted about it. I don't think I LOVE every little part of my body, but in general I think I'm pretty good at self-acceptance. My body is a little disproportionate (my bum is smaller than belly/waist) and my stomach problems mean I can't wear tight-waisted things, so I have just had to accept that good fitting clothes are rare, and make do. I find "good enough" and go with it, because I'd rather look less-than-ideal than be roasting hot (and yes, I'm with you on cold vs. heat, because adding layers vs. removing layers . . . yes).

I am really relating with the Bad Mom blues. Oy.

I love swimming. I don't know if I would love 7 Peaks as much if I had multiple children. It's so EASY taking one kiddo. It helps that he's still excited about it. Just last week I tried a water slide for the first time in years (at Orem Rec) and I'm thinking with a swimming child, we are going to achieve a whole new level of fun on our weekly trip.

Here's to hoping you have more of the good parts of summer than the annoying parts!!

On the topic of the whole 'kids at home theme' can we talk about the food? The seemingly endless need for food? Preferably food that has some sort of nutrient content, until I can't randomly conjure up what fruit/vegetable they will like today or how they would prefer it to be prepared (cooked/raw/chopped/peeled/grilled/etc/etc)so I just give in to endless amounts of Goldfish until I can summon the strength/courage to deal with it again. Whew. I feel better just writing that.
As a child I loved summer. My birthday. No school. Swimming. As an adult, I'm with you, I tolerate it. Thanks for letting me know I'm not alone!

I'm right there with you on the kids at home front. The guilt over them not doing anything constructive with their time and the guilt over trying to convince them to do something constructive with their time. Friday I took both younger boys to SkyZone for some trampoline exercise. You would have thought I was torturing them. Requiring them to leave the soft comfortable couch and i-pods in order to get some well-needed exercise in a uber-fun environment. This only leads to resentment for wasting money on something they simply complain about. Thanks, too, for including the link to that other post. I needed that laugh!