My Presentation at Life, the Universe, and Everything: thoughts on Success, Social Anxiety, and Inherent Coolness (or my lack of it)

Two weeks ago, I presented at Life, the Universe, and Everything, which is a writing conference in Provo, Utah, that focuses on science fiction and fantasy. This is my third time presenting there, and I think it was the time I was most prepared.

My library friend Pat and I present together. Our topic is the best science fiction and fantasy books of the previous year; she talks about picture books and junior chapter books, and I do the young adult novels.

Maybe because this was my third year and I really understood what I was doing.

Maybe because there were so many good YA books in 2015 to talk about.

Maybe because more people came to hear us than I expected.

But this year was definitely my favorite year of presenting. I managed to use my time almost exactly right and only had to rush on the last two books. Plus, at the very end, someone slipped in late and came up to ask me for a handout. She said “I was rushing to get here but I couldn’t get here in time. I heard you speak last year and I really wanted to listen to you again!” and I said “Yeah, Pat is pretty awesome” (she’s being presenting since LTUE started) and she said “no, I meant I wanted to hear you.” 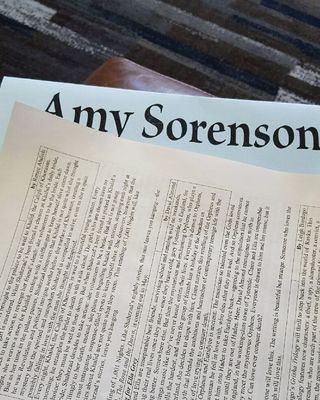 That totally made up for the fact that my name was spelled wrong on my sign and that they didn’t put my bio in the program (again).

I love presenting at this conference. I love presenting, in general. This is one of my weird quirks, and it surprises people who know me well, because I am an introvert through and through. When I am sitting in an audience at a conference, or walking around, I’m uncomfortable and anxious; I wish constantly that I had the skill of striking up a conversation with people I don’t know.

But speaking to a large group of people is totally energizing to me. It’s just so fun. I always finish LTUE with more determination to be noticed as a writer, because I would like to present there not only as a librarian (who got the spot by default when another librarian couldn’t present) but as a writer who people want to listen to. So for that woman to tell me she wanted to hear me: well, that pretty much made my day!

After my presentation, I was feeling energized and excited and social. I actually talked to a stranger in the bathroom! Then I raced across the conference center so I could listen to Shannon Hale talk. I love her YA novels and I’ve heard her speak before and always enjoyed it. That hour, she was speaking with an editor, a publisher, and another author about their favorite fantasy and science fiction books. With a wider scope and much more off-the-cuff, then, it was basically the same topic that I’d presented on.

It was interesting to listen to the discussion from my librarian’s perspective. People in the audience—and these are people who are invested in these genres—were scribbling down notes and titles, but there was only one book mentioned that I hadn’t heard of. It made me realize just how much I have learned by working at the library.

But as the conversation went on, my energy and excitement started to drain away. I looked around the room and realized just how many people were there. More than double the amount who were at mine. And they had a sort of energy, a breathless, soaking-in-everything-my-idols-are-saying sort of spirit. I watched the presenters speak and their confidence and presence were undeniable. They know each other, have worked together, have a history and a camaraderie that’s casual because it is comfortable. I thought of my writing ambitions. I imagined myself in a place where I have finished my novel and it’s been accepted for publication. Even if—even if I ever manage to achieve that long-held and seemingly-unachievable dream: even then, I will still only be me. The shy and awkward lady who, when she does manage to say anything in a group setting is usually either wildly inapplicable or just sort of lame. Being a successful writer requires more than only writing—it does require that ability to integrate yourself into things, to be able to interact with people who don’t know you.

And it’s an ability I lack.

Deep down in my bones, I’m not…I’m not cool, I guess. I’m not the kind of person who attracts friendships or relationships. I can’t network. My worst nightmare is having to go to a party where I don’t know many people and I must somehow figure out how to mingle. Kendell, who is the opposite of me in this regard, thinks it is only a skill I haven’t learned yet. Maybe he is right. But he’s never felt, either, what I feel in a social situation: the rush of terror, the absolutely blank mind, the way my heart pounds and I know I look stupid and it’s just people around me but I just have no idea how to fit myself into the mix.

After Shannon Hale’s presentation, I went out into the lobby, which was full of writers and creative types sitting around together on cream-colored couches and chairs, laughing. I stood in front of the fireplace and pulled my phone out, so I could turn the ringer back on and check my messages, and just then Kaleb called. “No, you can’t have any friends over, not until I get home,” I was saying, when I noticed that Shannon Hale was walking across the lobby. Right toward me, and I think she heard the tale-end of my conversation as she walked past, “Sure, you can have a cookie, I’ll be home in twenty minutes.” And I thought…if only. If I, too, had that thing. She has kids, I have kids. If only I could just, somehow, strike up a conversation like a normal person.

I walked through the parking garage with a mix of feelings. Both deflated but still certain that my presentation had gone well. I suppose none of my anguishy angst matters in the least, not until I actually manage to achieve that first goal—to write something worth noticing. But there’s also that other tug—even if I can achieve that goal, will it matter? If I can’t also manage to market myself, to network, to talk to people, will I be successful anyway? Or am I doomed from the start?

I'm the same way. I really struggle in social situations, and yet I do ok speaking in front of a group. It's weird, isn't it?

But yeah, I can't talk to someone in the checkout line or the bathroom. I have to work really hard to do that. It's almost painful.

I think if you dig down into most writers you'll find yourself right there - anxious, angst-ridden and stressed! They've just learned to hide it when presenting (as you have through doing LTUE three times). When you're a published writer you'll find the first time harder than the second, but little-by-little you'll get the hang of it and be able to relax and start to enjoy it (even if only a little bit).

some of my very favorite authors are shy and not extroverted. Anne Tyler. Elizabeth Strout. :)

Congratulations on a job well done