Scrapbooking Christmas in January: When You Don't Do December Daily 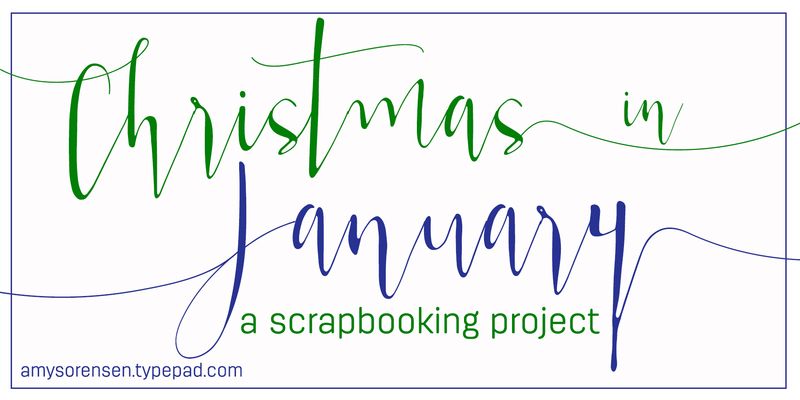 Yes, I know: it’s February! But I’m so close to completing my scrapbooking-Christmas-in-January goal that I’m going to push on and finish.

Unlike the (seemingly) rest of the scrapbook world, I don’t do December Daily. The thought of it gives me hives. I am always so stressed and busy in December that the thought of trying to find something scrap-worthy every. single. day. just seems like a nightmare to me.  (Kudos to those of you who can do this. It’s just not me.) I just scrapbook Christmas and December like any other topic in my traditional albums. I always do a layout about Christmas day for each of my kids. Depending on how the pictures turn out, I’ll make one about Christmas Eve. This year I meant to make a layout about how much I love the week between Christmas and New Year, but I realized I took hardly zero pics during that week this year.

In fact, that’s something I do: While I am scrapbooking Christmas photos, I keep a list of pictures I want to remember to take the following December. Mostly this list comes from that feeling when I’m scrapbooking and I think “I really wish I had a picture of ____________.” I set it up as an email that I delay delivery of until December 1. It is so helpful to be reminded of as the holiday season starts.

But I’m also a big believer that you don’t HAVE to have a photo to scrapbook a story. Take this layout: 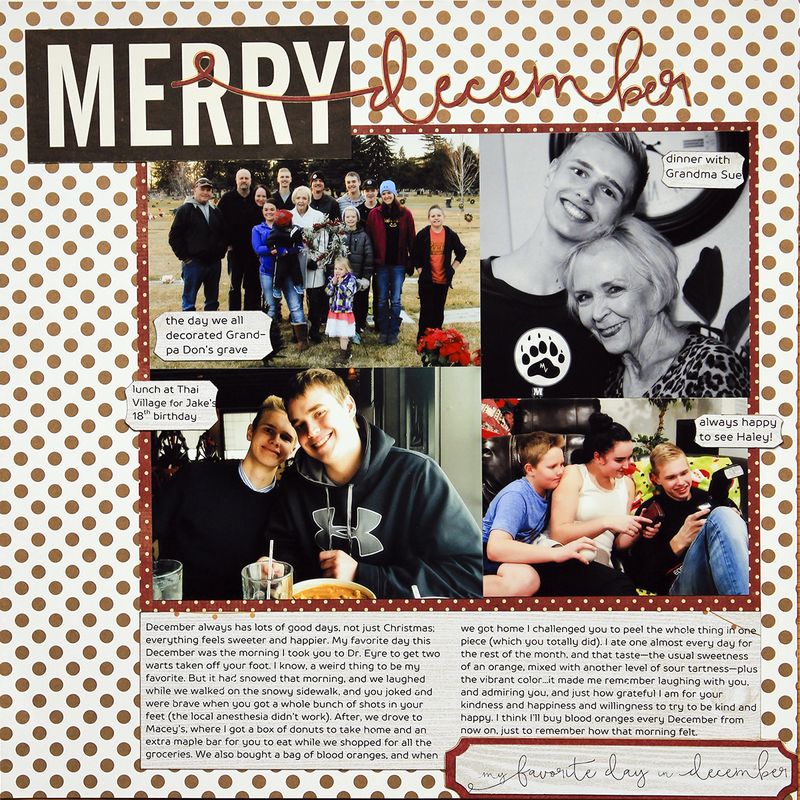 The story I wanted to get down was the one I wrote in my journaling, about the snowy morning with Nathan when we bought blood oranges at the grocery store after his wart-removal appointment with the dermatologist. Not the most festive topic, maybe, but it really was one of my very most favorite mornings all December. I wish I would’ve taken a selfie of the two of us, but I didn’t. So I just gathered some other pictures from December and then told the story.

font tip: contrast. I really, really love script fonts. The more swooshes the better! But with mostly boys in my life, I don’t use them very often. If I’m making a layout that is about a boy and a girl, though (if it’s about one of my sons and me, for example, or a teacher, grandma, sister, aunt, or friend who is also a girl) I tend to get scripty. To keep it from feeling too feminine, however, I always pair a script font with a straightforward, simple, and bold sans serif font. Not only does it help the layout feel a little more masculine, it establishes some contrast. Use the script in small doses.

Silhouette tip: cutting thin fonts. Some fonts are constructed of really, really thin lines. The one I used for this layout—Bellweathers—is one of those. I liked the shape of the swooshes (especially that long on the “d” in “December”) but it was so thin it would’ve been nearly impossible to get off of the cutting mat and glued down onto my layout. To thicken up thin fonts before you cut them on your Silhouette, use the Offset button.

After you’ve done this a couple of times, you’ll find it’s a really quick process for making your words just a little bit thicker.

Are you a scrapbooker who does December daily? If not, how do you document—if you do at all—the other days in December?

I've four Journal Your Christmas albums - not from consecutive years. I follow along with Shimelle's JYC each year, and some years there's an album product and some years there isn't. But every year there IS some thinking and some journalling and a real appreciation of Christmas and what it means to me. I think you'd really like her class (and once you've signed up you can take it every subsequent year for free).
I really don't think JYC would bring you out in hives!