Home Archives Profile Subscribe
The Best Way to Retain Teachers: An Ex-Teacher's Perspective on a Disturbing Problem
The Motherhood Place I Am In Right Now

Book Review: The Passage Trilogy by Justin Cronin (with spoilers!)

(but I will warn you before I spoil it!)

I'm still trying to figure out why this is true for me: I am endlessly fascinated by the idea of the world stripped of most of its people. Post-apocalyptic fiction is almost at a dead heat with dystopian fiction (and yes...they are closely related but I insist they are different speculative fiction subgenres!) when vying for my affection; I like the great dystopians more than most post-apocalyptics, but the majority of dystopian novels are barely good. It's far harder to pull of an awesome dystopia than an awesome post-apocalyptic, I think, because the former requires genius while the latter requires...less genius.

What will destroy humanity? How, if at all, will we manage to rebuild? How would the world itself heal or change if most of us vanished? How would the survivors put to use the leftover everything of human society? How would people interact? With the savagery of The Road? with the human ingenuity of Alas, Babylon? with the humanity hodge-podge and genetic mutations of Oryx and Crake? What would it feel like to be alive in such a world?

I know it's not everyone's cup of tea. But it is delicious, delicious tea to me. 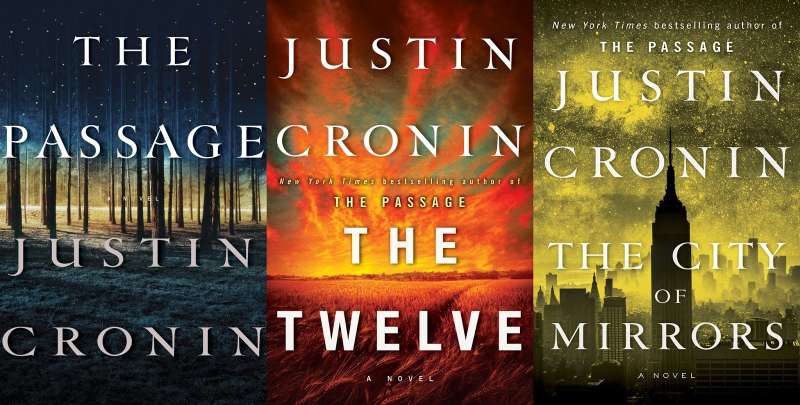 The method of the end of the world is as varied as the (enormous) amount of novels speculating about it. In Justin Cronin's The Passage trilogy, the method is a virus, mutated from bats and then genetically engineered by scientists who at first just want to eliminate death. Death, the argument goes, is illogical considering how much effort Mother Nature has put into human beings; consider our intelligent brains and our ability to create as contrasted with how quickly a human life passes. This nefariously beneficial goal eventually gets superseded with the idea of building an invincible soldier. The first mutation of the virus arrives from South America in a man named Fanning, who becomes Patient Zero. The scientists working on the mutations try twelve different variants of it, each time injecting the virus into a man who had been on death row. Creating super soldiers who can heal quickly, are unaffected by almost all medical problems, and are stronger than the strongest man imaginable—what can go wrong?

In that sense, it is human hubris which destroys the world, but then, isn’t it always?

As they are given their variations of the virus, each of the twelve change in similar and also different ways, but with the same general result: they are enormous, with skin that glows slightly green. Their teeth grow sharp and their appetites turn to raw flesh and fresh blood—they are, in effect, vampires of a ferocious new sort. Only vaguely recognizable as men, so don't picture any of the effete vamps from other books.

The scientists keep each of the virus-infected patients in a medical lab in the Colorado mountains, locked in glass observation rooms, guarded and observed by a variety of men. The main scientist of the project, Jonas Lear, decides that the experiment isn’t working because he is putting the virus into the wrong type of people; he wants to see what might happen if it were injected into a child. He chooses a girl named Amy, whose mother has recently disappeared after killing a man; no one will notice that she's vanished. Except—they will. This decision is what the crisis will continually turn on, as Amy will eventually save the world.

There wouldn't be a story if the infected Twelve didn't eventually break out of their containment and spread the virus, which is exactly what happens.

I decided to start this trilogy this summer because A--the third book came out this spring, which means I could read the whole series in a row with no waiting, and B--it felt like the right sort of thing to read on the two vacations I took in June. I started The Passage on the airplane to Cleveland with Kaleb and I finished it in Paris with Haley; I started The Twelve while I was waiting in the Heathrow airport for my flight home after lugging both books around London, Brussels, and Amsterdam. (I always overestimate how much reading I'll actually get done on a trip!) Then I took most of August to finish The City of Mirrors, the third (with occasional periods of reading something else, namely essays and poetry).

I'm left with mixed feelings about this series.

On the one hand, I really, really enjoyed it. I liked the concept of a virus run amuck across the earth, and I loved seeing how the (very few) survivors adapted. I liked the menace of the virals; I liked that the series is a blend of sci-fi and horror with just a smidgen of fantasy tossed in. I like that while new characters were often introduced, we follow the stories of almost all of the main characters through to the end. I liked that sometimes the story jumped between the time when the virus started and the time, 100 years in the future, when we meet the survivors. I loved so many of the characters.

There were places where the language was highly overwritten. (One sentence in the second book used "sledgehammer" as a verb and my Inner English Teacher had a fit.) And some of the places the story went were sort of...ordinary. I wanted it to be extraordinary throughout, rather than a conglomerate of other survive-a-virus novels (The Stand comes to mind, of course.)

I was thoroughly disappointed by the book's ending. One bajillion pages of story and a trilogy it took me the whole summer to read, all based on the idea that Amy would save the world. And she did—but in such an ordinary way that I had to go back and reread that section just to remember how she did it. To save the world, she had to kill Patient Zero—the admittedly icky but not quite scary Fanning—and she did it only by being in the right place at the right time. Literally any of the other characters could have done that.  Remember: I wanted this to be extraordinary. So I imagined Amy saving the world by doing something only she could do. Perhaps something in her blood (she is, after all, technically the 14th recipient of the virus, and in her it works perhaps as Jonas Lear intended) fought against the virus in Fanning's body. But her being in the right place to toss a chain around his neck?

And then there is the problem of the epilogue. This takes us 900 years into the future, when humanity has righted itself; a Jaxon descendant is working on getting people back onto the North American continent, as the required 1000 years since the virus hit have passed. Some reviews I've read have complained that this section was entirely unnecessary, but I actually love that it was included. It helped tie up Amy's story. But there are two problems: One, the technology. Really? If the world basically had to start over, would we eventually end up in the same place, with cars and telephones with cords? I think we would build off of the myths of the vanished world, and the remnants of the technology, to create something different. Second, the language. When Peter's great-however-many-grandnephew arrives in Amy's North America, he has...a conversation with her. Which would be impossible, as language changes so much. In almost a millennium, if the new society spoke something like "English" it wouldn't be very close to the English Amy would know.

In the end, I am glad I read this trilogy, even if it wasn't as good as I wanted it to be. It was a good summer read for me, as I don't usually like the regular "beach read" recommendations but I do like something a little less intense in the hot months. (Well, only if I'm traveling; it just ended up being a summer of travel for me.) It has a literary edge that some genre writing doesn't, but it was built mostly upon story. Despite its flaws, I think many readers will enjoy it, and despite that disappointing ending, I am glad to have spent my summer with Amy, the Girl from Nowhere.