Home Archives Profile Subscribe
Books I Can't Wait to Read: A Book List for the Future
The Best Way to Retain Teachers: An Ex-Teacher's Perspective on a Disturbing Problem

The British Museum: How Ancient Artifacts are Like Time Travel Devices

Our first stop in London (after getting breakfast and checking in to our hotel) was the British Museum. I was excited to see the Elgin Marbles, but before I write about what I loved about the museum itself, I must write about walking there. We stayed at the Swinton Hotel, which was about half a mile from St. Pancras and Kings Cross train stations; I suppose we could have taken the Tube to the museum but I wanted to walk so as to see this part of London. It was raining, so I didn't take any pictures, but I have a perfect image in my head of Haley and I walking down the rainy streets, both umbrellas up. We walked (following the Google Maps instructions) and talked and laughed. I don't even know what we talked about, although Virginia Woolf was in the mix. The cityscape—Bloomsbury—seemed made of parks and tree-lined streets and elegant buildings. My feet were wet and I was a little bit dizzy with exhaustion but that walk: it was one of my very favorite experiences of our trip, the rain and the feel of being in a city, my first glimpse of London with my daughter.
The British Museum building is enormous. It sort of reminded me of the Pantheon in Rome, in the sense that the feeling you get from the outside is very different from the feeling inside. 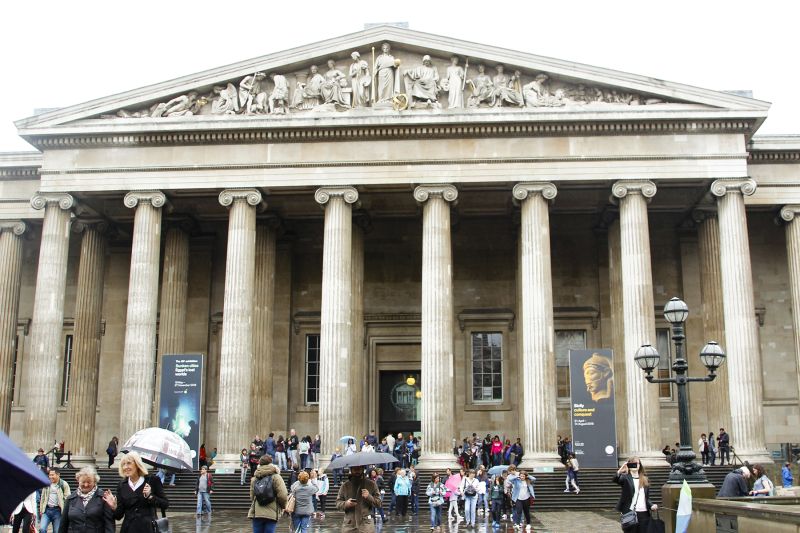 Outside, it is all old stone and columns and a Greek pediment; it looked old, but inside it felt...not exactly modern, but contemporary, with an inner courtyard and a circular staircase that winds around the reading room and a glass-and-steel ceiling that seemed to curve (it might...I'm not sure if the arching bands just give the illusion of a curve). We stopped to admire the statues, lighting, and just generally awe-inspiring beauty of the courtyard, and then we wandered in to the Egyptian wing.
Here we saw all sorts of things: statues of Egyptian kings, sarcophagi, an enormous granite scarab beetle, mummified cats, the figures of the Goddess Sekhmet, and a fragment of the enormous Great Sphinx. I cannot say that I am a dedicated scholar of Egypt; I know a little bit about its mythology but it is not a country I am enamored of. But I was several times brought to tears at the objects in this room. There is something about an ancient piece of man-made something that is so moving to me. That it survives when its creator is long-gone is part of it. But there is also an element of suspension of disbelief involved in learning about history; we have stories and accounts of what happened, but we can't experience it. Ancient pieces like this are, for me, a way of coming closer to experiencing them, because they exist in this world while their long histories lead back to a world I'll never see. 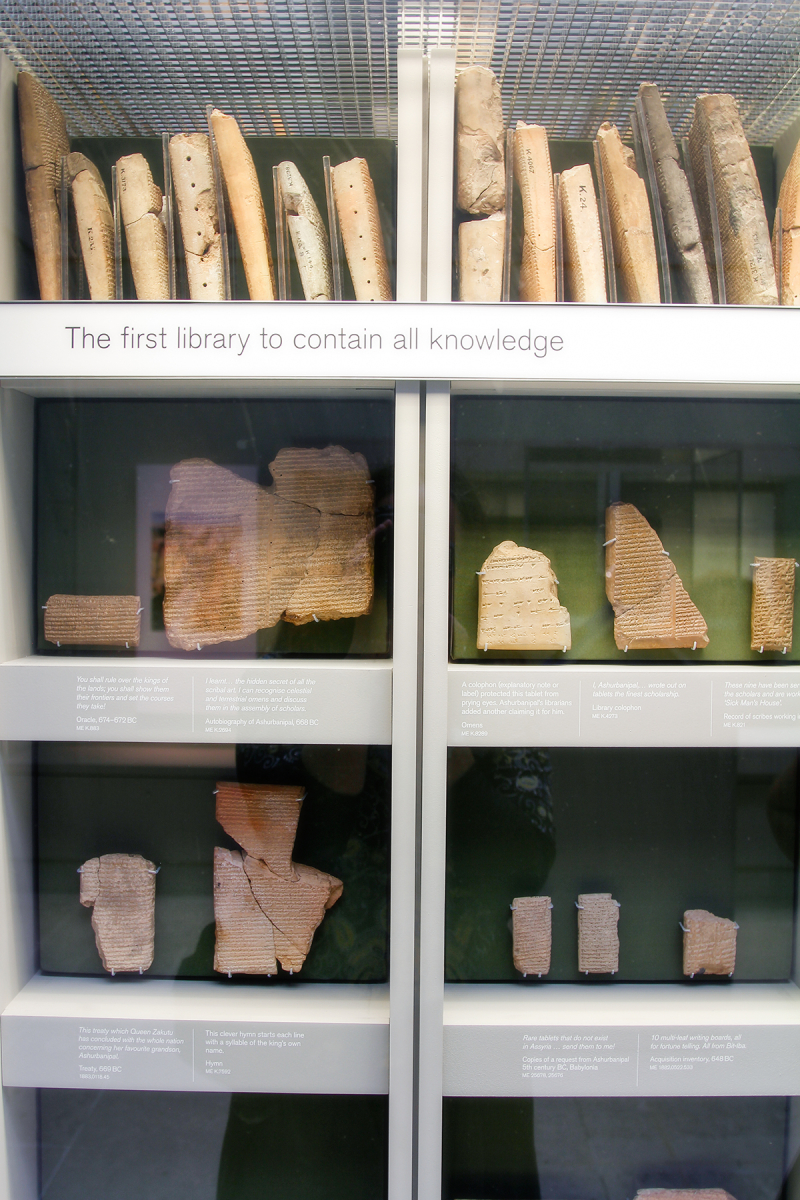 (Objects from the Library of Ashurbanipal; Ashurbanipal was the last great king of Assyria, and this library, located in Ninevah, is where the tablets with the Epic of Gilgamesh were held. This was a fairly swoony spot for me, as these ancient tablets—from 7th century BC—are simply pieces of ancient books. Who held them when they were still functional? Who carved them? Books are an inherit part of humanity just as stories and history and written records are.)
We did see the Rosetta Stone, but it was fairly difficult to have any sort of Moment with it, as at least 100 people were gathered around it. I explained to Haley what it was—a translation tool—and what I knew of how it works, and she didn't know much about it, which sparked a conversation about how I think colleges are failing to teach students all of the General Information about The World that they should know. The flimsy art & culture class required for graduation is a joke.
Ranting over, we wandered toward the space I had wanted to see so badly, the Parthenon gallery. More than two centuries ago, the British gathered up about half of the broken statues and friezes that had fallen from the Parthenon in Athens and brought them to the British Museum. (Most of the rest of the statuary is in Athens.) There is quite a bit of tension now about this, as Greece would like to possess the statuary it should own. The British maintain that the museum is a collection of historical pieces from across the globe and as such, the pieces already there should remain so that more people can see them.
(I'm torn as to which side is right; part of me thinks it's Greece's own fault for not valuing its antiquities in the first place, but maybe that is my long line of British DNA speaking?) 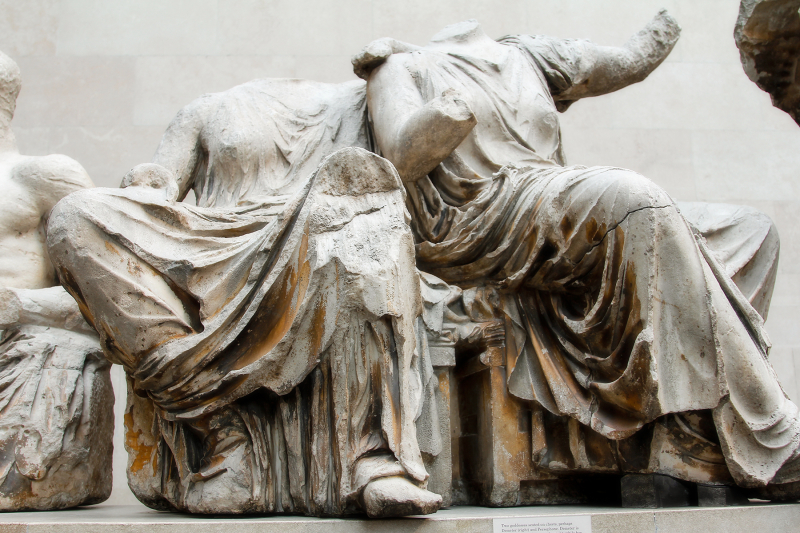 (The plaque beneath this section said that perhaps these two figures are Demeter and Persephone.)
But I felt lucky to be able to see them. When we went to Italy, one of my biggest disappointments was how Christian everything was. Yes, Rome is the capitol of Christianity and yes, I am a Christian. But Italy is stripped of its pagan history. I was hoping for statues of Venus and Minerva and Proserpine, but all of that is gone, replaced by Christian icons and relics. My psyche is so connected with the Greco-Roman mythology that the lack of it in the place it should be was just...depressing. So seeing the Elgin Marbles was fairly thrilling for me.
But my absolute favorite thing in the British Museum was a surprise.
I think somewhere I had read that this display was there, but I hadn't remembered until I wandered through room 41, which is full of artifacts from Britain during the Anglo-Saxon period. And there it was: the Sutton Hoo display. Sutton Hoo is a place in England that is covered with burial mounds. Most of them have been robbed, but in the 1930s the land's owner had one of them excavated. There they found a "ghost" ship (imprints in the sand of a wooden ship) where someone of wealth and power was buried. Many of the artifacts are still at Sutton Hoo (which is now on my list of places to visit when I return to England), but most of them are at the British Museum.
If my psyche is tied to Greek mythology, a large chunk of my ancestral longing is tied to the history of Britain. Seeing the pieces in the display—dishes, weapons, that haunting helmet with its flying bird—gave me literal chills and I had to catch my breath. ("Hysterical in museums": I didn't know until this trip that that is one of my personality traits.) Bits from a thousand tales and novels and history and ideas were in that display.
And the display itself! Everything is in glass, of course, but in cases with varying widths, so it feels interactive and modern. But the best thing is that, on the glass, are some lines from Seamus Heaney's translation of Beowulf. Swoon. (I adore Heaney, and his translation of Beowulf​ is...well, it's testament that people read such things outside of being forced to in their Ancient British Lit university courses.)
I loved that display.
(So much that I only thought to snap a few photographs, none of which turned out. I didn't want to photograph it, though. I wanted to look at it.)
I could've stayed in room 41 for the rest of the day, honestly. But Haley was feeling antsy, and we still had other things on our itinerary, so reluctantly I left the British Museum. But I left with a feeling of being better connected, both to a larger sense of history and to myself. There is something powerful and perhaps even magical in viewing ancient artifacts. Someone else in history touched that object, made it and used it and then left it behind when he or she died, but here I am, sometimes thousands of years later, looking at the same object. (I wish I could touch them, too! In another life I would like to be a museum docent.) It is almost a sort of time travel, a way of being in the presence of so much time all in one moment, as if, if I could just know how, I could flick away the layers of time to see and know and understand the person for whom that object was significant.
I don't really have a name for that feeling. But I am filled with it in history museums. It is the reason I love going to museums. I only got a small taste of the British Museum, just enough to know how much I want to go back again one day.

I love this post! I am also a museum crier to my family's annoyance. I also get that strange and unnameable feeling in museums...especially the Smithsonian for me. I love your travel posts and Sutton Hoo has been on my list of places to see for a long time.

I feel that way when I see the Command Module from Apollo 11 at the Smithsonian. I'm overcome thinking of the incredible bravery it took to blast off from the Earth with no idea if they'd safely return.

The British Museum is dedicated to human history, art and culture, and is located in the Bloomsbury area of London. It is great.
https://www.imanali.in/

There is no direct route from Pune to Manali tour. However, one can deboard at Delhi and visit an exquisite place in India surrounded by all the enchanting view of the Himalayas, snow-capped mountains, rivers, etc.