Thoughts on Redoing a Scrapbook Layout

In my last blog post, I wrote about how hard it has been for me to scrapbook lately. But, about a month ago, I got invited to go to a crop. That was the impetus for me to decide it was time to try again, so I gathered up some supplies and went to the crop.

Just a few days before Kendell’s cardiac arrest, I had been working on a layout with this quote from Frederick Buechner, which I first discovered from Marie Taylor via her sister Katherine:

The grace of God means something like: Here is your life. You might never have been, but you are because the party wouldn't have been complete without you. Here is the world. Beautiful and terrible things will happen. Don't be afraid.

I love it, and I decided it would be perfect for a baby layout. I had a lovely vision in my head of the quote written out in a brush script, in bright blue and green—but as is well-known around these parts, I’m fairly dismal with anything that requires a brush. Then I had an idea: I’d watercolor a piece of cardstock with the colors I’d imagined, and then cut it out with my Silhouette using a brush font.

I had printed the photo, written and printed the journaling, and cut out the title, but then Kendell was in the hospital, and that half-done layout sat on my scrapbooking desk for months.

It was the first thing I worked on at the crop I went to last month.

And when it was done, I absolutely hated how it turned out. 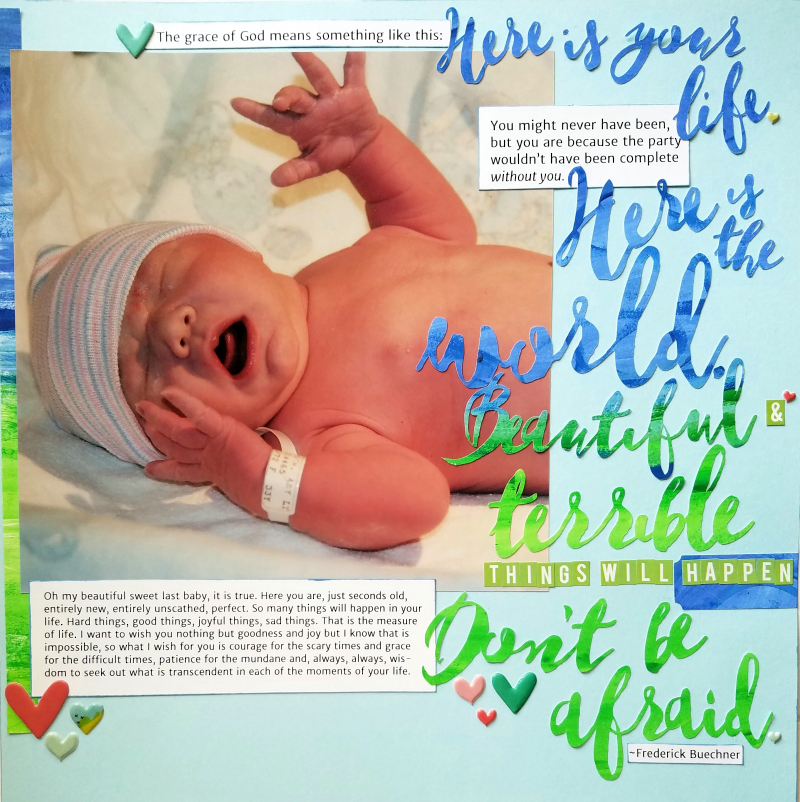 The skin tone in photo was too red, I didn’t love the title font or the letter stickers, and those pink puffy hearts just did not work. I used them because the photo was so warm, I felt like I needed something to balance the color with, but they just emphasized the red skin tone. The light-blue background felt wrong, and the stupid little strip on the left felt like exactly what it was, a misplaced afterthought.

The layout was nothing like I imagined and I didn’t love it one bit.

Now, I am not one to redo layouts very often. I have a few of them that I absolutely just do not love, but usually I will shrug my shoulders and move on to the next one, with the idea that done is better than perfect.

But I love that quote so much.

And the idea for the title design.

And my thoughts in the journaling.

I wanted to love the layout as much as I'd loved the idea.

And really, that first layout? It was like...a warm up. It was just me getting back into the scrapbooking groove.

So I redid the layout. I stuck with the same concepts, but I made some significant changes. First was to change the photo to black and white, with only the tiniest bit of color left. For the title, I used a different font, Lolly Script instead of Manhattan Darling, and an alphabet stamp instead of the alphabet stickers.

Instead of watercoloring on cardstock, I used watercolor paper. I had to laugh when I finished the piece, because it felt so obviously influenced by my recent trip to Europe and all of the Van Gogh works I saw: 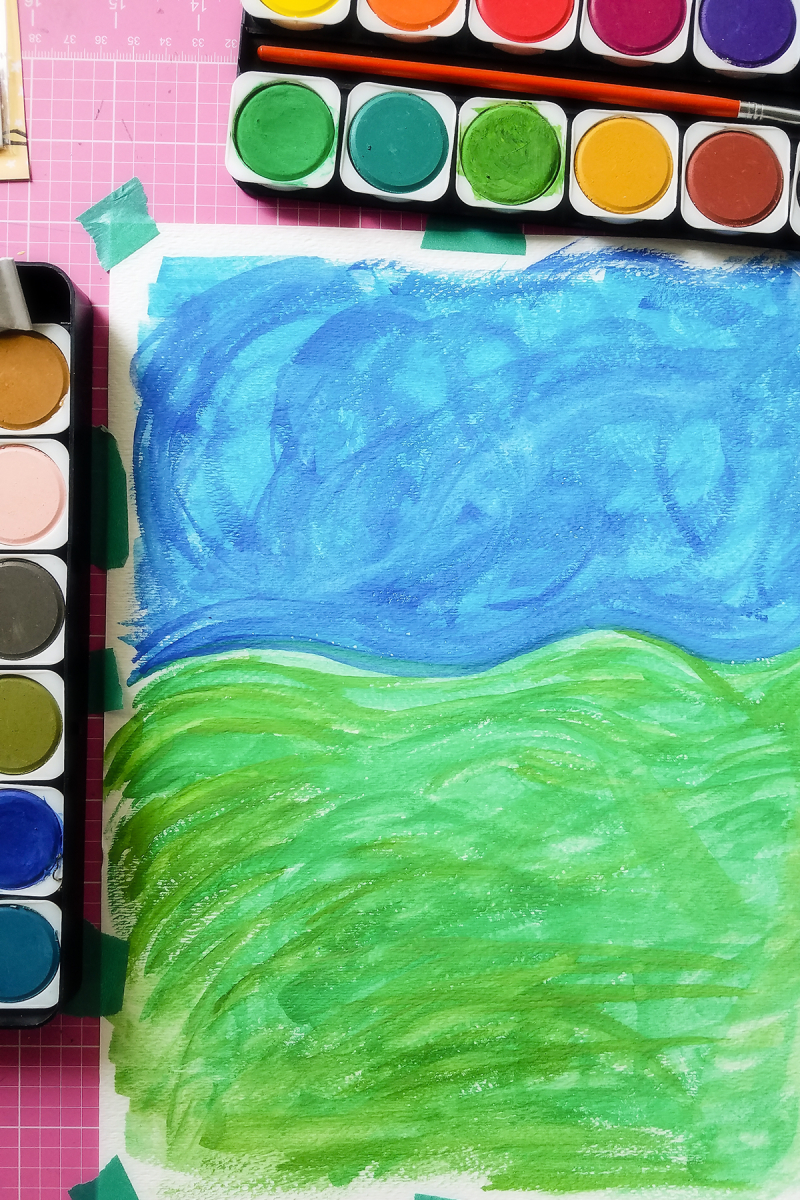 (Not that I am comparing myself to Van Gogh of course! But the lines are much more swirly and defined on this piece than they were on the original one.)

This was a little bit tricky for the Silhouette to cut. I did a test cut of some plain labels to make sure the setting I chose (textured cardstock) would work. The labels cut out beautifully (I am looking forward to painting them and using them on other layouts!), but the painted piece did not. The words on the blue section cut just fine, but the words in the green section? Well...not so much. (How weird is that, that the color would influence how it cut? Maybe the paint pigment affects the paper in different ways?) I had to cut most of it away from the background with an exacto knife, and some of the words I had tried to cut turned out totally useless. But, I think I made it work OK with the stamping.

Finally, I used some of the same puffy stickers from the original layout, except only the blue ones. They peeled right off, which made me wonder about the future sticking power of puffy stickers. (I glued down the ones I reused). (And I kept the pink ones for a different layout.) The remodeled scrapbook layout still isn’t perfect (I’m not 100% certain that cluster of tags & hearts at the bottom isn’t, in fact, a sticker sneeze) but I love it so much more: 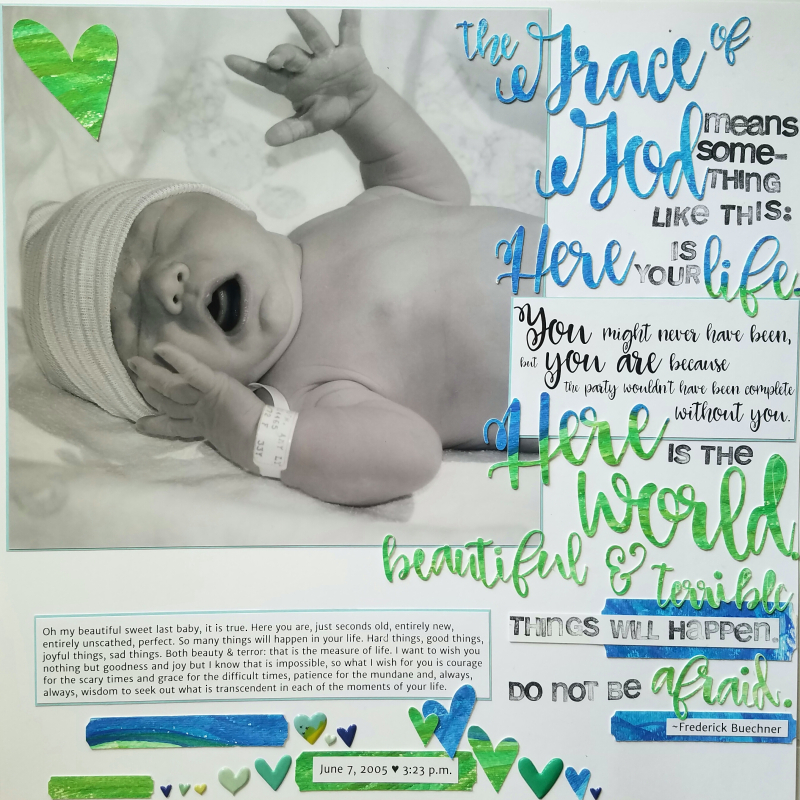 While I probably won’t make a habit of remaking scrapbook layouts, I learned that it’s just fine to do it once in awhile, for layouts that have extra meaning or even a technique you want to get just right. Sometimes it takes a couple of tries to get the results you envision. Done is always better than perfect (which is why I’m leaving that cluster alone), but one of the points of creativity is loving what you create, and knowing when something didn’t work is a way of learning what does work.

When I was finished, Kaleb saw both of the layouts on my desk. He asked why there were two, and I told him I didn’t like the first one I’d made, and asked him which one he liked better. (He didn’t know which was the new one.) He only took about one second to decide that the second one was better. “It’s just...it makes more sense to my eyes,” he said, “and the colors are better.”

He thought for a second and then he said “plus, I was a pretty cute baby, wasn’t I?” and then I could only hug him because he’s exactly right!

I love when my son oohs and ahhhs over his baby pictures.

Thanks for sharing the process. I think we all create with a particular idea in mind of the outcome, and when that outcome doesn't meet our idea, we have to decide what to do with it. I am with you--I usually leave it. Often I find I like it later and it's that too loud critical voice in my head that is the distraction. Sometime, though, the creation is a more important part of the message, and the product has to be just right. Interesting how many nuances are rolled into this concept of adhering pictures to paper.
Anne-Liesse