“Goodest Grief is an Orchard You Know. But You Have Not Been Killed/Once”: Or, Thoughts on Scar Tissue

Sometimes I have a hard time finding a way into a story. A story I want to tell, or need to tell, but usually it’s these important ones that are the hardest to start. Because what if I start and then keep writing but I can’t write it right, can’t do it justice, can’t write what needs to be written in a good way, even if—especially if—it’s not a good story? Not an easy story, like this one I need to tell, a story that’s not a good story and I don’t want to tell it because telling it makes it true, makes it real, and yet—perhaps the only goodness in telling a hard story is the relief—a sort of solace—of telling it well.

I want that solace.

Tonight I read this poem, “Ghazal for Becoming Your Own Country” by Angel Nafis. And then, somehow, here it is, my way in, even though the poem and this story have nothing, really, in common. Not in an obvious way, and all heartache is specific to its circumstance—and yet, all heartache is also the same. It is a brave poem that speaks bravely to grief and loss, to the self that has lost and fears more loss.

It gave me a little handle on my fear and made me think I can ride my moon hide through this upcoming darkness.

(And if you are bothered by the F word in the poem, I don’t even know what to say to you.)

But enough of poetry: here is the story.

In the middle of August, just as we were planning our trip to New York, Kendell started having a hard time breathing when he exercised. I’ve not yet felt like he was fully recuperated from his cardiac arrest last April, but this was definitely a downswing. First he was having to stop after five minutes, then three, then two. He’d exercise but get out of breath. His energy started to lag and he started sleeping more, and finally—the week before our trip—I convinced him or he decided that this wasn’t normal and he should have the cardiologist check it, just in case.

So in we went, and after hearing his symptoms and listening to his heart (I have come to be able to read the merest hint of a cardiologist’s facial inflection when she hears a murmur, to prepare myself for the bad news before she says the bad news), the doctor ordered some tests, and after an EKG and an echo and a TEE (trans esophageal echo, which is a tube down the throat with a camera to look at the heart), after anxious waiting it was confirmed:

his valve, the one they just replaced last October, the one that should’ve lasted for 15 or 18 or 20 years, is already failing.

When he had his aortic valve replaced the second time (last October. As in: one year ago. 12 months. 52 weeks.) it was failing because of scar tissue. When the pathology came back and the surgeon explained, I thought but wait. How does replacing the valve with another valve stop the scar tissue from growing? Shouldn’t we be addressing the reason why grew? Won’t it grow again?

But I am not a cardiac surgeon or a cardiologist. I’m only a person who is starting to learn something I didn’t ever want to know, so many meanings of the word heartache.

When he had his cardiac arrest, the electrocardiologist surmised that scar tissue had grown in the layer of tissue where the heart valves are located, interrupting the electrical current. When he explained this to us, I thought but wait. Scar tissue again? Can’t anyone stop it from growing? Isn’t there a medication?

But I never thought it was still growing.

But it is. The process of healing is killing him.

And I have to tell you. This isn’t happening to me. I don’t have to have the physical experience of the chest crack, the sternum sawed open, the heart cut, the stitching and the medications and the pain and the pain meds. I only have to witness, and try to encourage and uplift. I only have to empty pee and fetch water and rub feet and manage prescriptions.

(If even the medicine hurts too)

But I am tired.

I’m tired of witnessing his suffering. I’m tired of him having to suffer. I’m tired of how life keeps teaching us that you have nothing if you don’t have your health is the truest cliché in existence.

Fuck the fog back off the mirror.

I’m tired of waking every night in terror just to listen for his breath and of waking in the morning with my teeth aching from grinding them in my sleep, with my hands aching from making fists all night.

I want our life back, the life we had when he had his health (even though if I follow the trail I don’t know where that life existed). I want to just be normal.

“You’re lucky to have Amy,” one of his friends told him after he heard about another heart surgery (some people have started to think oh, Kendell, another heart surgery! No biggie, he does it all the time and others are…more compassionate, more understanding that it is worse, much worse, not easier, each time), trying to lighten the conversation. A statement that’s probably true unless you know how small my capabilities for nurturing and nursing are. But the other way around is also true: I am lucky to have him, with his laughter and his drive and the way he takes care of me by taking care of everything, by the way we work together (he runs the weed eater; I mow) and because of our history and our family and our us-ness.

I don’t want to lose him and I am terrified of losing him.

Which is why we are trying it again, one more time. This time, they are trying a mechanical valve (as his others have been first bovine and then porcine). This time, we will try to come out on the other side of the odds (four percent of replaced aortic valves fail, and of those failures ten percent fail because of scar tissue, so it’s a medical issue no one pays attention to because who would make money off such a tiny percentage?), even though on the other side is life-long blood thinners and monthly INR checks and worrying about a stroke or a brain bleed for eternity.

Goodest grief is an orchard you know. But you have not been killed
Once. 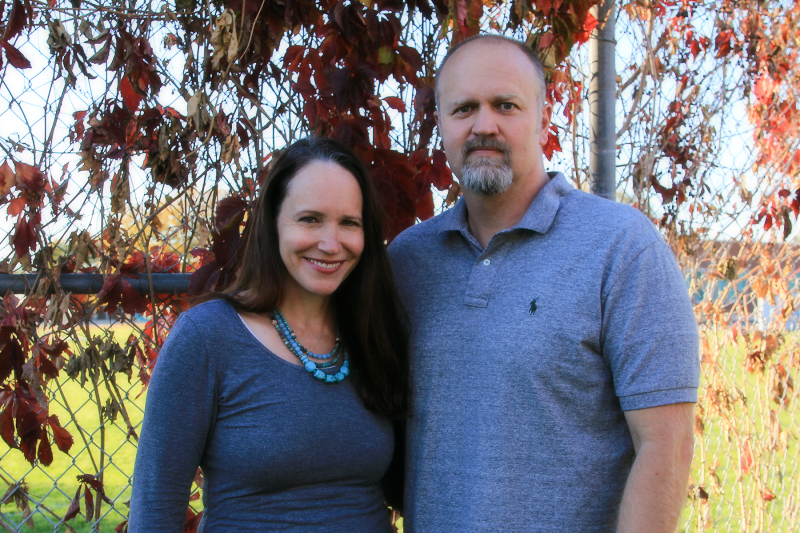 Nothing but good thoughts are going your way. Your husband is amazing and so, so strong. I wish you both the best (so inadequate, but heartfelt).

This made me cry. I hate that Kendell has to do this again- he's got to be so tired of it. Wishing the very best outcome for November 14. Big hugs to all of you.

Praying for you both! ❤️

I'm so sorry you both have to go through this again! Praying for all of you.

Praying for a successful outcome. I have read your blog for years but don't often comment. I cannot imagine what you and your family are facing. From reading your blog I get the sense you struggle with the entire "church" thing, but this is a time to believe and rally everyone you know to stand in your corner and pray. Hugs.

I hope it is not too late to send retroactive love.