A few weeks before his surgery, Kendell asked me if I’d picked out my hospital book yet. This question made me pretty happy, as he’s A—not a reader and B—traditionally adverse to buying books. But we’ve done this hospital-stay thing so many times, he knows it is important to me and helps me during the surgery (which is a long time waiting in uncomfortable chairs) and his days in the hospital (which are full of naps for him and me either watching him sleep or reading in other, yet still-uncomfortable, chairs).

You can’t take just any book to the hospital. You have to choose carefully. First off, it can’t have anything too traumatic, as your real-life trauma is enough to be getting on with. It needs to have a story that’s got some familiar tropes, something that’s gripping but not too intense, intelligent but not too complicated, because you want to be able to both be caught up in the narrative but also able to put it down at a moment’s notice. The setting is important—you really want to forget you’re sitting in a hospital room with someone you love who’s gone through something terrifying. Finally, you need characters you can love because there is something that happens when you love fictional characters: somehow, your affection (and patience! very important, patience!) for the real people in your life increases.

I always turn to fantasy for hospital reading, as it fills all of the necessities. 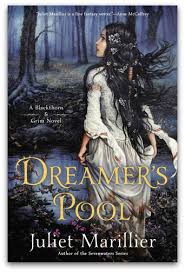 For the surgery Kendell had in November, I picked Dreamer’s Pool by Juliet Marillier, and it was just about right. Her book Daughter of the Forest is one of my favorite fairy tale retellings, so I already trusted her, and this new series (called Blackthorn & Grim) seemed intriguing: a wise woman who is imprisoned receives a boon from a fey on the day of her execution. She can decide to let the execution take place, or she can make a promise to the fey that she will not seek revenge against the man who put her in prison and she must help anyone who asks her to.

She chooses the latter. Without ever telling us her real name, she chooses another one, Blackthorn, and then, along with a man named Grim who was in prison with her, sets off across Ireland to the little settlement the fey told her to seek out. She lives in a small cottage on the edge of a forest near a pool that is rumored to be enchanted; she begins helping the villagers and even strikes up an agreement of sorts with Oran, the prince of the area. When she saves his bride, Flidais, from drowning in the Dreamer’s Pool, he seeks out her help, as the woman he wooed through letters is not the same woman who has arrived at his castle.

I liked many things about this novel. Blackthorn was a character I could connect with, as she is troubled by her past and it is easy for her to slip into darkness, and plus, I almost always like books with wise women (that goes all the way back to reading the Clan of the Cave Bear series when I was a teenager). I liked Prince Oran, too, who reminded me a little bit of Faramir from Lord of the Rings. I always love books set in Ireland, and the subtle magic of the fantasy was perfect.

And really, it was almost the perfect hospital book.

Except, the main conflict started to annoy me. Oran is trying to figure out why the Flidais he is meeting in person is so different from the one he met through the letters they wrote to each other. Was it just that she misrepresented herself to win the engagement? Or is it something more sinister? Mostly I found this extremely frustrating. It made me think of Shannon Hale’s Goose Girl, which has something similar, but in that case you’re experiencing the conflict through the characters that also experience it. In Dreamer’s Pool, you experience it partly second-hand, as some of the story comes from Oran but much of it through Blackthorn. I kept flipping to the back of the book to gather a few clues as to when they would finally figure out what was going on.

But that could’ve been forgivable, if Marillier hadn’t done something I can’t abide: putting modern sensibility inside the heads of historical characters. The setting of this novel is Ireland in medieval times—a time period not known for its liberal thinking. Characters overlooking homosexuality with a shrug and the idea of letting people love who they love—I don’t have a problem with that idea, but it is not how people thought during that time period. And while Oran’s proto-feminist perspective is refreshing, it also felt inauthentic to the setting.

I probably won’t pick up the rest of the books in the series, but I didn’t hate this book. I just didn’t love it as much as I wanted to—but in the end, it was a good choice for a hospital read.