I think that Zadie Smith is one of those authors who really smart, literate, up-on-the-issues readers read. And while I'd like to think of myself as one of those readers...dare I confess I've never read one of her novels? I've been drawn to them, especially NW, but for whatever reason just never tried one.

When I read about her newest novel, Swing Time, though, I was determined that this was the one, because it is ostensibly about dancers. I tend to be drawn to novels about dancing, and this one also has a friendship theme, and it's set in London (I've becoming a little bit obsessed, after visiting London, with reading books set there). I've had a hard time writing about the book, however, because I both loved it and was disappointed by it (except...I loved it!) 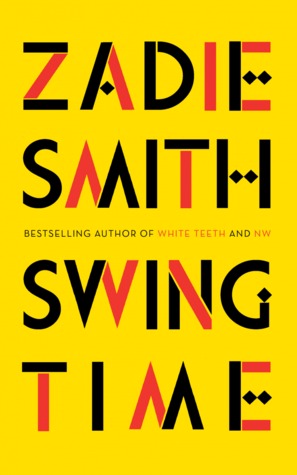 The novel tells the story of two biracial girls, Tracey and the unnamed narrator. They meet at a dance class at their community center and form a close but complicated friendship. The narrator's mother, a black woman who is determined to raise herself up in the world by getting an education, is a different sort of mother; on one hand, she is fairly non-nurturing, but on the other she is determined that her daughter, too, fulfills her full potential instead of getting caught in the poverty cycle. So her daughter's friendship with Tracey, whose father makes brief, chaotic stops into her life, is not one she encourages.

Still, the girls dance together; they watch videos about dancing and dancers; they grow apart and come back together as they enter adolescence and young adulthood. Tracey is a talented dancer whose home situation makes it more difficult for her to be dedicated; the narrator loves dance as an idea and an art form, but her flat feet and lack of natural talent mean she will not be involved with dancing as an adult, as Tracey is for a while. Instead, the narrator ends up working for a pop star named Aimee, traveling around the world and managing the details of the musician's life.

The two girls' friendship forms a sort of reference point for the narrator; she both despises Tracey and is envious of her successes. It is an underlying presence in her adult life, even though she sees Tracey very rarely. Aimee becomes interested in the poverty in Africa and decides to build a school for girls in a village there. So the story is constantly moving, between the London of the 1980s and contemporary London, New York and Paris and Africa. The tension in the novel builds from the prologue, where the narrator, who has been recently fired from her job assisting Aimee, hints at something horrible she did to get fired, summed up in a short email from an old friend: Now everyone knows who you are. What did she do? That's what you wonder as the tale progresses.

My ying/yang response to the novel lies within the difference between what I wanted it to be and what it was. I wanted to—thought, as I began, that I would​—read a novel that was about dancing. Thought I'd read details about aching, exhausted bodies and the complexity of patterns and steps, about blistered toes and glittered costumes and the strange feeling of performing a dance on a stage, how it is both terrifying and exhilarating. The book has none of this. Instead, it is "about" dance in the same way that the narrator herself is interested in dance—as a concept. The dancing in Africa, the performance of dancers on New York stages, the dancers in the old movies that Tracey and the narrators watch: these things influence her just as much as (or perhaps more than) her own days as a dancer (which are never remembered).

In a sense, this isn't a book about dancing or friendship or race or poverty or social status; it is a book about memory, or how it feels to remember experiences and then try to figure out what they mean from a different age. From this perspective, the pacing and structure and the told (rather than shown) feel of the details make perfect sense.

Still, if it is a book about dance as a concept—and that thread does run through the narrator's experiences as one of the ways she frames the world—I still wanted more of it. For example, in one scene the narrator is watching a production of Showboat​, which Tracey is dancing in, and as she watches she explains that "I felt my feet moving beneath me, trying to echo on the plush red carpet the complicated soft-shoe shuffle Tracey was performing right above me on the hard-wood stage. The steps were familiar to me—they would have been to any dancer—and I wished I was up there with her."

Just like with the steps...any dancer can relate to that. Or, likely, anyone who has been submerged in something for many years during their childhood, dance or basketball or gymnastics or whatever. It doesn't last forever and eventually you stop doing that thing you used to do well and love and live for. Your body stops doing it, stops, usually, being able to do it, but your psyche—your soul. Something inside you never stops wanting to do it.

I wanted more of that, wanted a book that helped me remember dancing. The fact that Swing Time doesn't do that, however, doesn't make it a bad book. That's just not what it is, despite what the reviews and press copy say. I still loved the novel, however, especially because it has one of those personal, serendipitous reading moments, wherein an answer you are looking for is found in a novel.

November (when I started this book) was a hard month for me. (Thus the silence on my blog.) Not just because of Kendell's surgery and recuperation. That, in fact, has been the least-hard thing. Instead, it was the U.S. election. It has made me feel completely undone. I have stood in front of my clothes in my closet and wept because I wish all of it, every single thing I own, were black. I can't do color. I can't find hope. I haven't felt this dismal in decades. But something that the narrator writes in Swing Time helped me just a bit.

Near the end of the novel, the narrator is in Africa, and she travels to a place that was historically significant, a spot on a river where slave ships would stop to gather slaves before heading for the coast. She wants to feel a connection here, to her long-lost tribe or her deep roots or something, but it doesn't move her. Instead, she says

I experienced it not as an exceptional place but as an example of a general rule. Power had preyed on weakness here: all kinds of power—local, racial, tribal, royal, national, global, economic—on all kinds of weakness, stopping at nothing, not even at the smallest girl child. But power does that everywhere. The world is saturated in blood. Every tribe has their blood-soaked legacy: here was mine.

Power does that everywhere. Even though this election has felt, to me, like nothing that has ever happened ever in the history of humanity, and that it is the start of the downfall of contemporary times, Smith's words (brutally true words) helped me have a spark of hope. Every generation, every society, has its violence and wrongness and bloodshed. Perhaps this is just my generation's time. That realization doesn't change or fix anything, but it does at least give me the tiniest bit of hope that, like slavery and past genocides and the brutal machinations of historical figures with power, a way will be found. Not to fix what cannot be fixed. But at least to survive inside of the awfulness.

So, despite what I wanted to find in this novel that I didn't, despite being disappointed by it, I also loved it. I think it will linger in my reading memory for a good long while.