I usually love Sara Zarr's books. Story of a Girl and The Lucy Variations are books I hand over to young adult readers all the time, and How to Save a Life is my favorite book she's written. She is great at getting inside a teenage girl's mind and bringing it to life on the page; her characters feel authentic and their situations applicable to contemporary life. 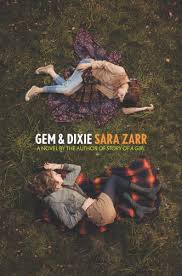 So I was pretty sad to be so disappointed by her newest, Gem & Dixie.

It tells the story of two sisters living in Seattle with their alcoholic mother, who's barely keeping it together. Gem, who's 17, has always taken care of Dixie, but when Dixie turns 14 and starts high school, the differences between the two make their relationship difficult. Dixie is outgoing and popular, whereas Gem is quiet and keeps to herself. They limp along with never enough lunch money or clean clothes or food at home, until their long-absent father shows up—with a backpack of money he tries to keep secret. Gem nabs it and the sisters head to downtown Seattle to figure out their next step.

It's not really that the book was bad. It wasn't awful; it was decent, in fact. But I expected far more than "decent" from Sara Zarr. The plot never felt like it came together, and then it was resolved too quickly and behind the scenes. Plus there were a couple of plot holes I just couldn't work around (like where all that money came from in the first place). I wanted so much to love it, especially as it was about sisters and because I had a trip to Seattle coming up (it's always kind of cool to me, to read about a place, even in a novel, and then go there). But it just felt...average.

In fact, I totally forgot I even read it until I spotted it again on the library shelves.

Hopefully I'll love her next novel!