Home Archives Profile Subscribe
What Else Would I Do on a Friday Afternoon in Summer but Plant Flowers?
What I've Learned About Being Intrepid: 2017 So Far

Lillian Boxfish Takes a Walk: A Book Review (of sorts)

A few years after I graduated from high school, I bumped into a woman I'd sort-of been friends with as a teenager. (I could remember her first name was Mary but I had to dig out my yearbook to figure out her last.) We shared a bit of what our lives looked like now (Haley was a baby then) and she said, "Wow, I am stunned. You were such a rebel in high school, I thought you'd be living in New York City with the lead singer of a punk rock band so you'd have a reason to keep wearing black clothes all the time."

That comment has stuck with me for many reasons, partly because I am ashamed of the fact that yes: I grew up in a small town in Utah and then I moved a grand total of about ten miles away and established my life. Plus, I sort of like the alter-ego she created for me, someone cool and involved and happy living in a big city.

But I really don't think I would be happy living in a big city.

I thought about that conversation quite a bit while I was reading Kathleen Rooney's novel Lillian Boxfish Takes a Walk. The main character, Lillian, is 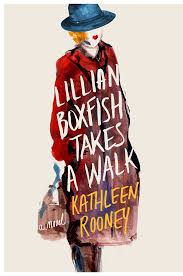 loosely based on a historical figure, Margaret Fishback, who was the highest-paid female advertising copywriter in the world during the 1920s and 30s. The story is told in chapters that alternate between Lillian's history in New York—her years of working up to the lead copywriter at Macy's, the boyfriends and the friends and the apartments and the parties. Also her struggle with the social limitations put on women at the time (she was the highest paid woman​, but definitely not the highest paid copywriter, for example). This part of the story explores the real-life implications of feminism, and what "feminist" even really means. How do women find happiness? Is it only through motherhood and marriage? Are mothers ever really happy or do we always have that "what-if" tug? How does one's work influence one's being?

The second part of the story is Lillian on New Year's Eve, 1984/85, and because of an accidental overdose of Oreos during a phone conversation with her son, she decides to take a walk. Walking the city has long been one of her favorite experiences—it was in her lunchtime walks that she composed her poetry—and so it seems like a fantastic idea to walk a 13-mile circle on a cold night in December. She makes several stops along the way: a favorite restaurant, a bar, a friend's party, a different restaurant. 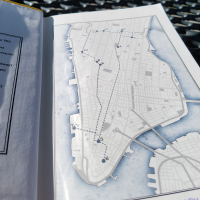 I love a book that includes a map! It helps me imagine the story better.

She makes quick friends with the people she meets and she discovers new things in the city, even though she knows it so well already. (Which is the point of loving a city, yes? That it is always changing?)​This part of the story explores what it means to be a flaneuse (a woman who loves to walk a city) and what it means to be a person who is fully committed to being urban, to living in a city.

I felt a deep connection with Lillian. She values words, and walking, and independence. I love her quick wit. And I hope that when I am her age, I am still able to walk 13 miles (if not run). Some of her life experiences mirrored my own, especially her struggle with depression. ("I was at my wit's end," she explains, "being in a place where the weather did not reflect my mood. I was raining; the sun mocked my sadness." Which is something I could've explained of myself this year.) (I am grateful we have Prozac now instead of electroshock therapy.) She is a fascinating, strong, funny character.

One of the only things I couldn't relate to, though, is her love for the city. Which might've doomed my affection for the book...except, it didn't. Maybe because in some alternate universe, that urbanite version of myself exists, an edgy, world-wise, successful Amy who, I imagine, would love walking the city, even at night, even in the cold. And partly because I finally visited New York City (last fall) and I could picture some of the places she lived in. (I especially loved going to Macy's in New York and riding the old wooden escalators.)

But that version of myself is not the one I've created, and the Amy I am now...well, I have no desire to live in a big city, even one as magical and lovely and storied as New York. (I would like to visit more often, however.) "The city," Lillian thinks as she walks through it, "is dazzling but uncompassionate." This is something she likes about the city, but it is the exact reason I don't want to live there. The immense amount of people, the way the buildings go on for miles and miles and miles...even the subway: it is overwhelming to me; it's too much. It's uncompassionate. It makes me feel too small, despite the dazzle.

On the day I finished this book, I mowed my lawn, and as I was mowing I came upon a pile of dog poop. This is one of my pet peeves: I don't have a dog mostly because I don't want to have to pick up dog poop. I was annoyed, especially as I know exactly which neighborhood dog left me this special treat, and I had half a mind to barge over and say something. But then I thought about fall, when all of our sycamore leaves start coming down, and how many of my neighbors probably get annoyed at having to rake up leaves that didn't come from their own trees. (Although: I do​ try very hard to get them raked up as quickly as I can.) And that led me to think about the nature of living in suburbia versus a city. You still have to deal with other people's dog's poop in the city, but you don't get to mow your own lawn, and therein lies one of my deepest reason for not wanting to live in a city: it's because I want my own space, flowers to plant and prune and deadhead and fertilize, trees to take care of. Grass to mow.

And maybe that makes me into something laughable from an urbanite's perspective. Maybe it’s unimpressive. But really: who am I trying to impress? Mary from high school? I still wear black clothes, I still listen to punk music, I still love reading. I will always love reading. And I especially loved Lillian Boxfish Takes a Walk because it helped me remember that my (boring, predictable, suburban, Utah-County) life is lovely, too.

i loved this book!! Have you read "This is How it Always Is" yet? I can't wait to see what you think?

I think I need to read this one for sure!! Loved your review and your thoughts about the connection to the text. ❤️