Home Archives Profile Subscribe
Battle Creek Falls Solo Hike: or, Trust Your Hiking Boots
Squaw Peak Hike, or: Recuperating from Injuries of both the Body and the Spirit

Book Review: We are OK by Nina LaCour 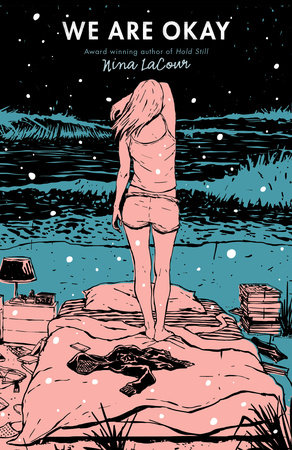 We are Okay by Nina LaCour is the second YA novel I've read this year which I will, I believe, eventually forget about completely, except for a few vivid impressions. (The first one was Sara Zarr's Gem and Dixie.) My favorite scene is the one where the main character, Marin, and her best friend/love interest Mabel are in a taxi together, discussing the novel One Hundred Years of Solitude with the driver. (Novels with characters who love books are some of my favorites, but they often make me pause and wonder. I've been a reader and a bibliophile my whole life, and I strove to be an English teacher who inspired my students to read big, to read hard, to push themselves. I believe that teenagers can read difficult books not just for an English assignment but because they love them. But I also know it's fairly rare that they actually do read them.)

The taxi driver says that he cannot love Garcia Marquez's work, only admire it. Not because of the sex or the difficulty, but because "there are too many failings. Not enough hope. Everything is despair. Everything is suffering. What I mean is don't be a person who seeks out grief."

This becomes an important conversation for Marin after her grandfather, who's raised her since her mom died when Marin was three, dies. This happens during the summer before she leaves for college, and his death pushes her over the edge. She doesn't talk to anyone, especially not Mabel or her parents, who have supported Marin as sort-of surrogate parents, but uses some of the money her grandfather had saved and flies to New York. Essentially vanishing from her life in California.

The blurbs about this novel hint that something tragic and dramatic happened between Marin and her grandfather that caused her to leave so abruptly and then stop communicating with her friends. What happened​? was the thing that made me want to read this book and the question that compelled me to keep reading. But I confess that while what happened was haunting, I was thinking it would be something more dramatic. I wasn't really let down exactly...but I just wanted it to be bigger.

This a book that unfolds fairly quickly and I read it in only a couple of days. I enjoyed the story, the characters, the setting—flashing back and forth between California and Marin's dorm room in New York state. I liked the discussions about books, reading, art, and creativity. How could I not like a book that includes a character reading a book of essays about loneliness?

I liked Mabel's mom and her relationship with Marin quite a bit.

And that scene with the cab driver—that will stay with me. Having gone through my Narnia winter this year and struggling with depression (and some experiences similar to what Mabel and Marin go through), I am learning that my proclivity to seek out grief—to read the darkest, twistiest books because they resonate with my darkness—might not be the healthiest way of coping. That I hold on to the sad and difficult more than I need to. Resonance between darknesses sometimes makes the darkness darker. This novel reminded me to also seek out light, and that the dissonance between darkness and light is where the energy comes from to move away from the darkness.

That said, I think it will be the only thing I remember from this novel. In fact, I totally forgot about reading the book altogether, until I spotted it on my overdue list at the library and had to hunt it down to return it. (It was under my bed, next to a pair of running socks and my pink headband.) Some books are like that: they bring you a little piece of knowledge, and the story itself is secondary. The knowledge is what stays, and that is okay.