Squaw Peak Hike, or: Recuperating from Injuries of both the Body and the Spirit

Sometimes it seems like I’ve been recuperating from an injury constantly. Since I sprained my ankle (and likely tore a bunch of ligaments…wish I would’ve gotten an MRI and a proper diagnosis then) at Ragnar in 2013, my running hasn’t been the same. It’s hard for me to trust my ankle to and to feel that I won’t fall again (especially since I have!); my back was painful for a long, long time and sometimes the pain flares up again, and now my knees are bothering me. I spend so much time thinking about getting my bones, joints, and tendons back in good working order that I forget I’m not the only one who is recuperating from something. 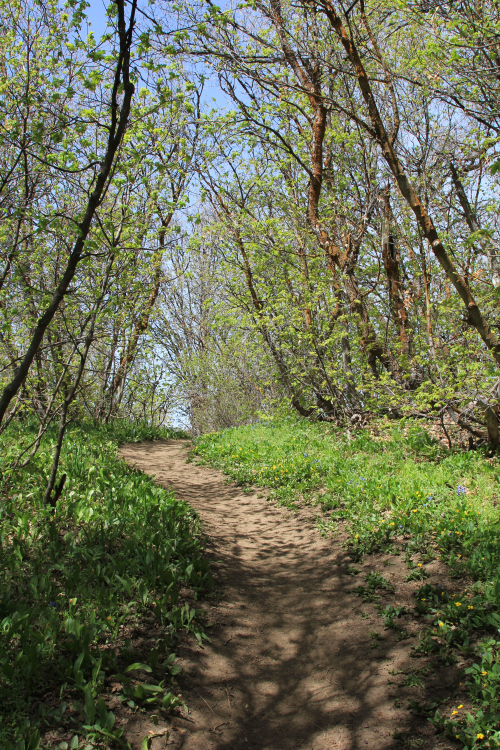 Maybe because his injuries are mostly internal (except for that thrice-cut scar on his chest), but I forget that Kendell is also coming back from injury. Severe injury, not just a dumb sprained ankle and swollen knee pits. In the space of a year, he had his chest cracked twice and part of his heart replaced with something foreign. Between those bookend surgeries, he had a v-fib episode that should have killed him and was in a medically-induced coma along with undergoing having his body temperature drastically lowered. He had to have a pacemaker/defibrillator installed. In the months leading up to the surgery where his bovine valve, slowly choking with scar tissue, was replaced with a porcine valve, his heart was having to work harder than normal. Then, after his surgeon installed the porcine valve, he never felt entirely better. Still had low energy, and the exact thing I was worried would happen was happening: more scar tissue was growing.

All of which means that for almost two solid years, his heart wasn’t working correctly. 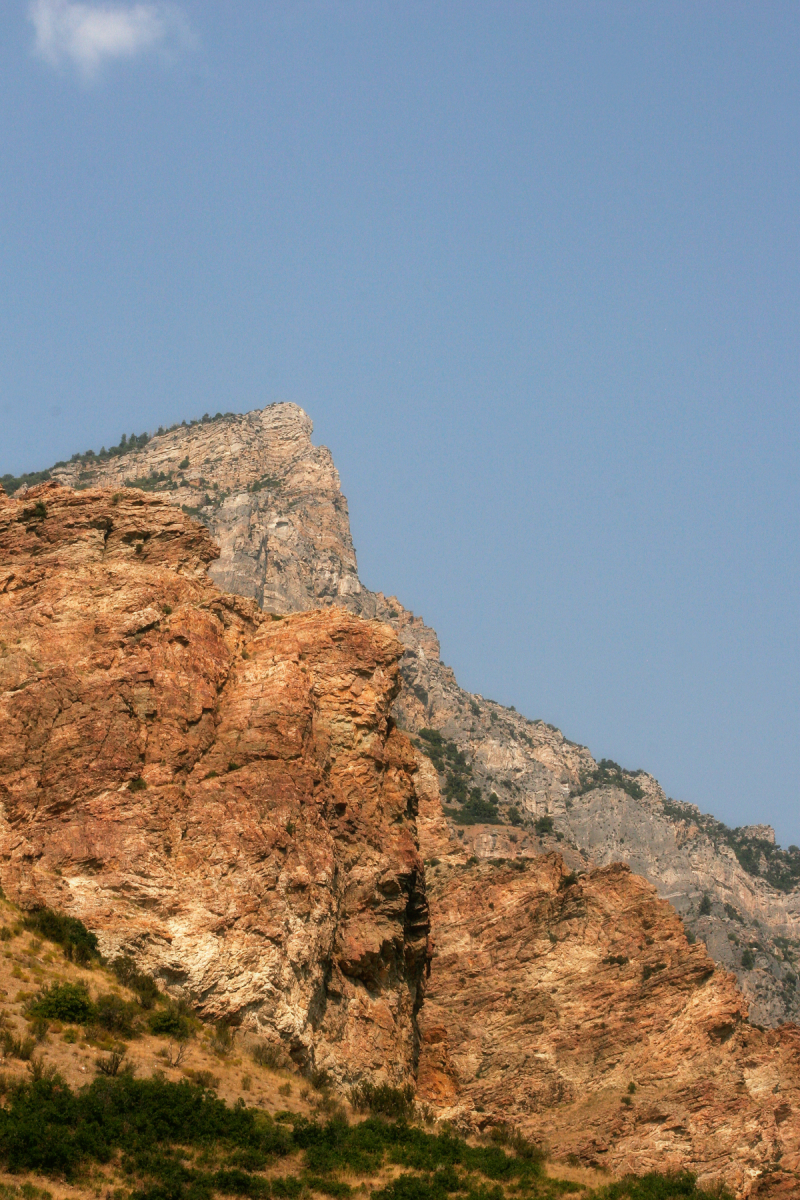 The external evidence of so much trauma has healed. His sternum doesn’t pop and crack anymore. His scar is his scar, healed as well as it ever will. But he is still recuperating. Still trying to come back from an injury. And sometimes I forget that.

Our weekend hike reminded me that he’s still in the healing process. 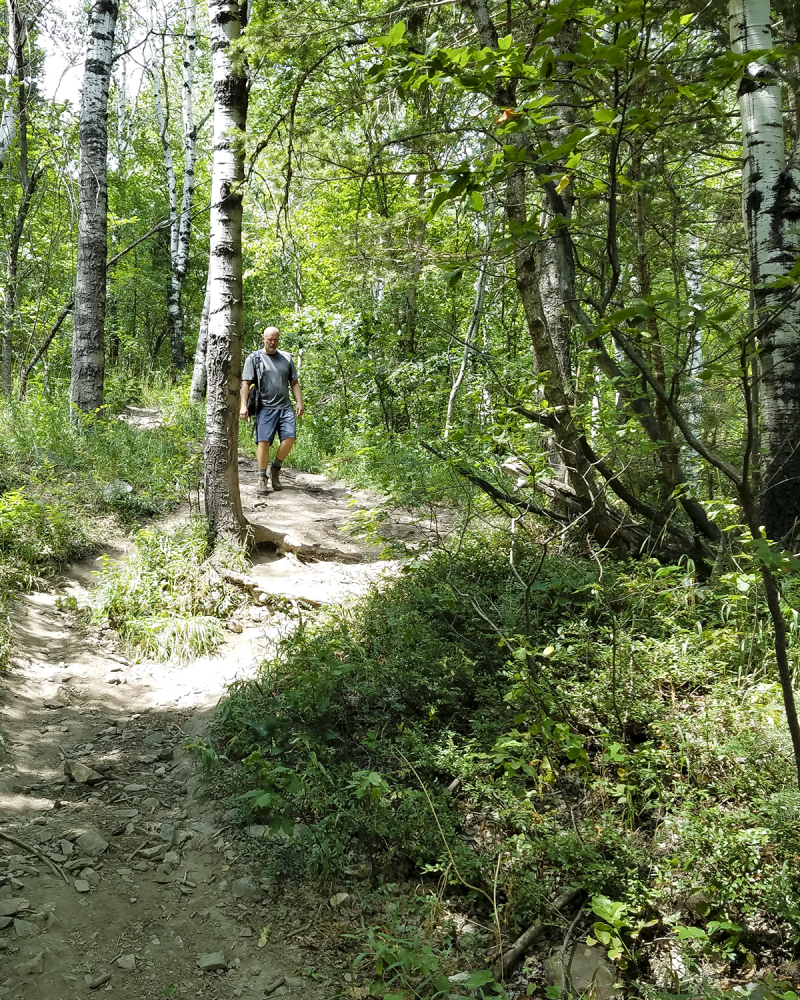 We decided to do a test run of a trail near us, Squaw Peak. We’ve hiked this trail five times together. It starts out with a fairly gentle incline; almost two miles up Rock Canyon. Then there’s a split in the trail; you turn left to hike all along the east (back) side of the peak, come around to a saddle on the west side, and then up again until you reach the summit. It’s one of my favorite hikes, partly because of the way it opens up when you reach the saddle; until then, you’re mostly hiking through trees, but you turn a curve and everything opens and you can see the other mountains, the lake, and the sky again.

But it is a steep hike. Nearly 3000 feet in four miles, but most of that is the last 2.5 miles after you leave the Rock Canyon trail. Kendell wasn’t sure how it would go. His heart and breathing have been fine, but his energy and stamina are still low. So we hiked the trail this time just to see how far he could get, not with the goal of getting to the summit, but with the goal of seeing how his body is doing. 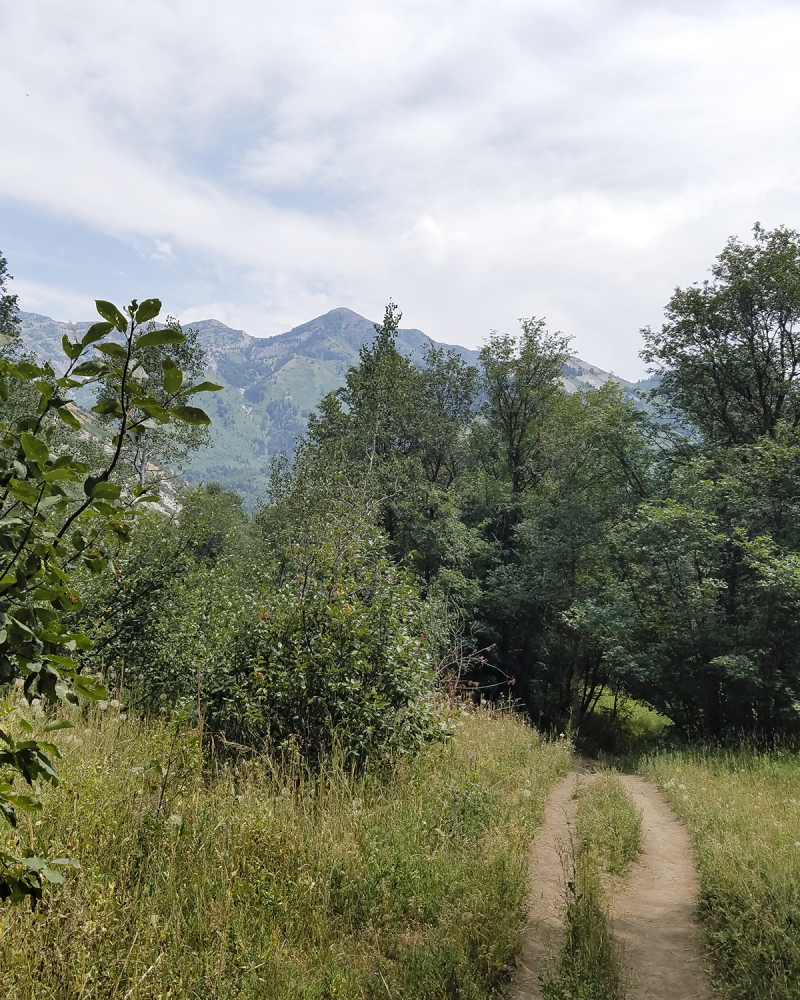 He made it all the way to one of my favorite parts of the trail. This is a meadow you cross while you’re still on the east side of the mountain. After 45 minutes of steep uphill hiking through trees, all of a sudden the trees and the uphill end. It’s a dramatic transition and also fantastic to move through a flat space. You can see the ridge of what I think is Provo Peak from the meadow if you look behind you, and a bit of Cascade Mountain in front. I imagine that sometime in the summer, the meadow is full of wildflowers, but I’ve never timed it right to see that. 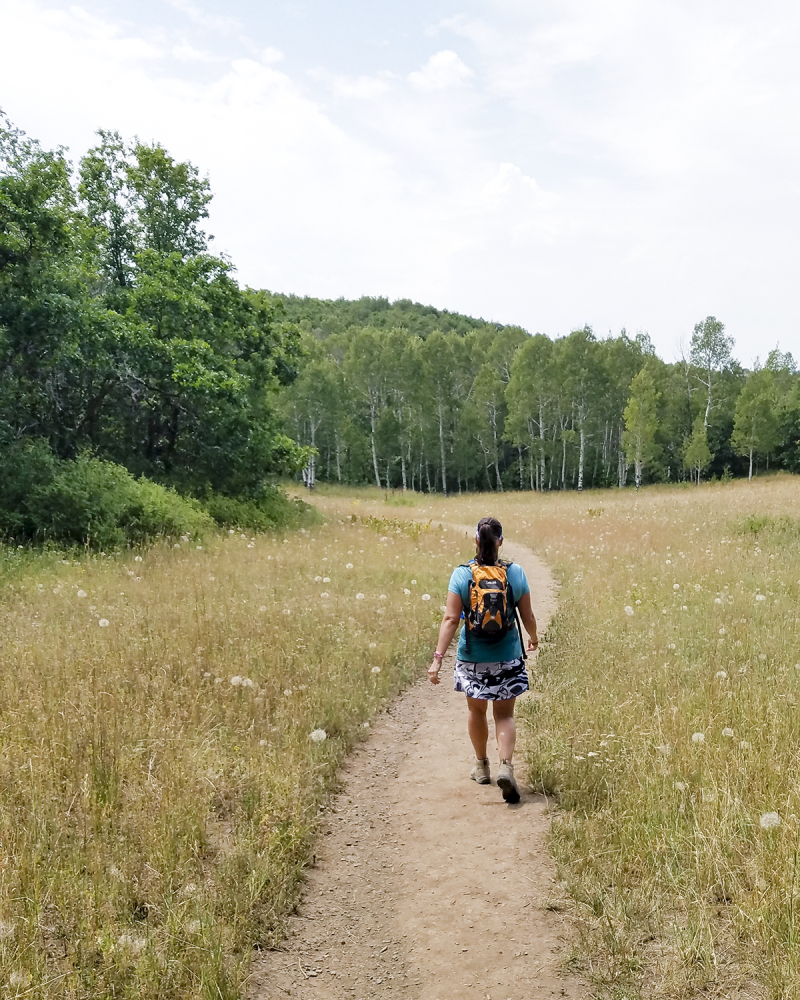 We took a breather sitting on a tree stump, and talked a little bit about how Kendell felt. I know it’s discouraging to him, especially since we were on a trail we’ve hiked before. I’ve experienced this same thing—it’s disheartening when your mind knows how to deal with a certain distance, but your body can’t. And even though logically you know that if you keep being patient and keep working you’ll eventually be able to again do what you used to do, it is so easy to feel overwhelmed.

In some ways, I think that coming back from an injury is harder than just starting out with exercising. When you’re just starting, you don’t know what you can do yet. It’s exciting and new to push yourself another half mile of running, another twenty minutes up a steep trail. But when you are coming back, it’s the very fact that you know what your body has been capable of, but isn’t right now, that is maddening. It makes your spirit feel restless and unsatisfied; it tugs and prickles at that part of you we think of as the “heart,” but that isn’t the muscle that moves our blood around. It’s the part of the psyche that moves the spirit, that gathers and disperses energy, that is troubled and uneasy.

It requires so much patience. 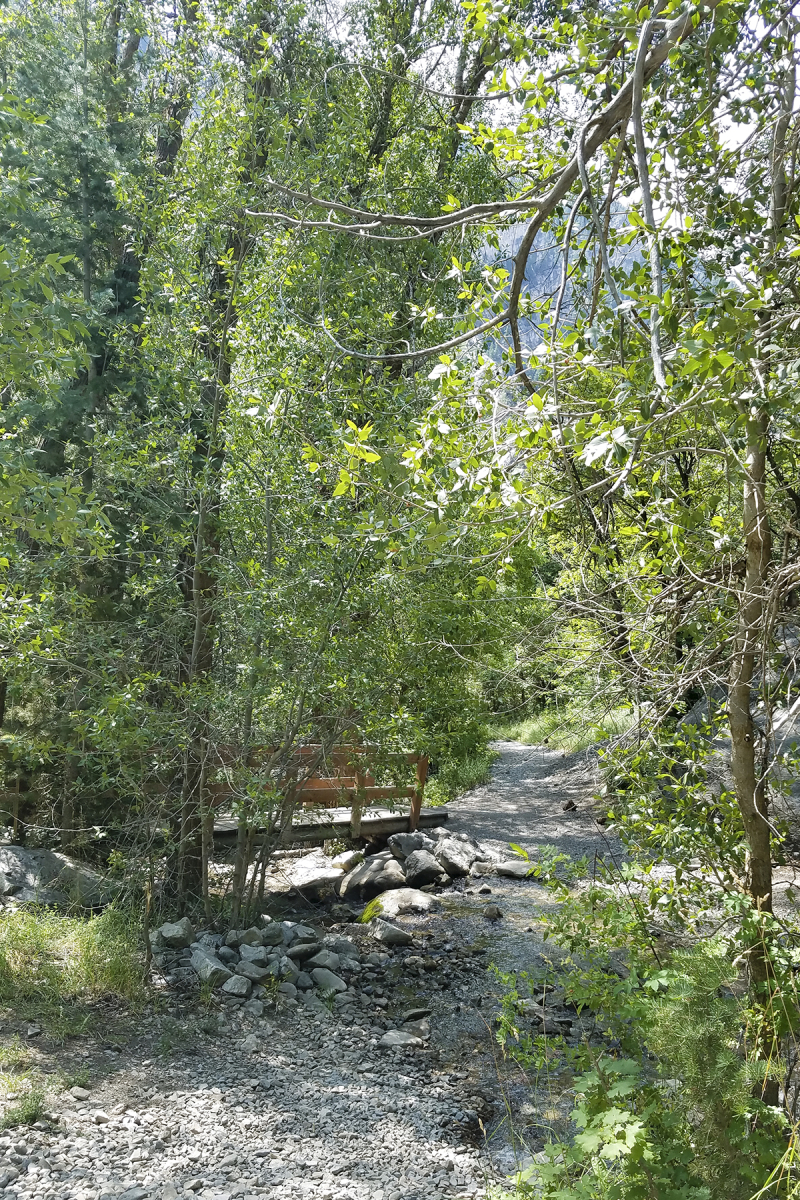 As we were hiking back down, I was out in front of Kendell for a while, and just as I reached the end of a particularly steep and rocky part of the trail a deer suddenly crossed right in front of me. Maybe twenty feet away from me. So close. A beautiful tawny doe.

I froze and watched where she went. She picked her way about 15 yards away from the trail, and then started walking downhill. So I kept walking. Kendell had caught up with me by then, so we hiked together, quietly as we could, and the doe kept our pace. For about six or seven minutes, she walked downhill, parallel to the trail, close enough for us to see her through the trees. Eventually she paused and looked right at us. We took a few pictures (so wish I had taken my Canon, as I felt like I should, instead of only my cell phone), and then she slowly turned around and headed back uphill. 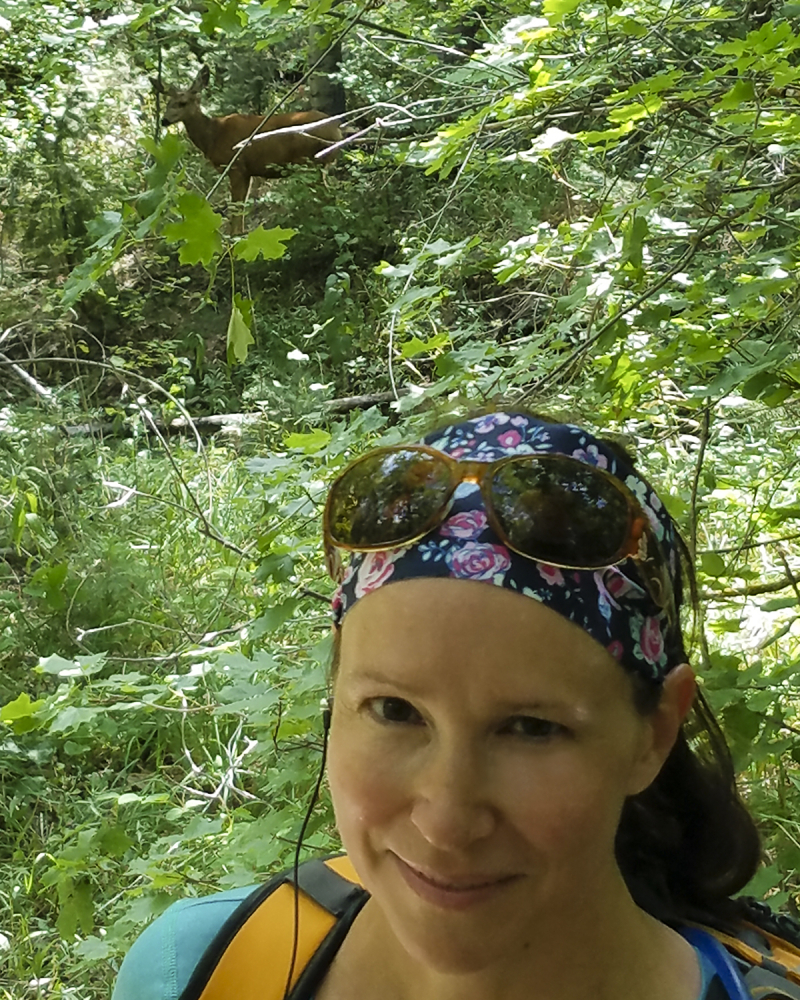 Kendell and I have hiked quite a few miles together over the past decade since he had his hips fixed. We once came upon the entire herd (or what seemed like) of mountain goats that live on Timpanogos. We’ve seen moose, elk, wild turkeys, racoons, skunks, and more than a few snakes. Once an infant bighorn sheep was drinking by a stream next to a trail. Once we caught just the very tail end (literally) of a cougar crossing the trail. And yes: more than one deer.

But that encounter with that doe was magical. To have her walk next to us for so long, her body moving peacefully through the trees and grass, the delicate way she placed her hooves. The calmness she carried.

I always feel, when I see a deer in the wild, that it is my dad saying hello from the other side. But this time felt like something larger. Yes, a hello from my dad. But also the universe telling us: be calm. Keep moving. Be patient. It will all be OK.

I don’t know what that OK will look like. I don’t know if my husband will ever have the energy he used to have. But we will keep heading out into the wilderness together (and by “together” I mean: me in front when we’re going uphill, him in front on the downhill), keep moving, keep being here in the world.

Keep healing and rebuilding our hearts.

Ok is exactly what you did yesterday. It's being and trying and acknowledging and appreciating and maybe even crying and laughing because you're crying and then doing it all again. It's enjoying the sweetness of now, and hoping the bitter won't last forever.

And the deer. Dad always comes when there's space, when we are open and waiting but not grasping. He sees that tenderness in our hearts and knows he can say what he wants to say, and not what we want him to say.

This is beautiful, thank you so much for writing and sharing.

Enjoy reading your blog and especially like the nature/hiking pixs. My mom is recovering from a triple bypass and will probably have her pacemaker replaced in September Hoping after that she can start the long process of recovery. Your posts are very inspirational.

Beautiful photos - and Oh, that doe! How wonder-full (and perfectly expressed in your writing).
We have no native land mammals in NZ - but I've had a similar experience when we saw a kiwi in the dusk (but only for a moment - 6 minutes would have been amazing!).