Home Archives Profile Subscribe
Why I Love Cute Running Clothes: A Manifesto of Sorts (or Maybe Just Some Justification)
Scrapbooking is Cool. You Can't Know That Unless You Try it Though.

Like Darkness is Hunting Me: Further Thoughts on Depression

The first thing I do in the morning, after dragging myself out of bed (I can’t remember the last time I woke up not tired!) and taking my morning meds is to wander out to the kitchen and look out the back door at Timp. I’m certain many people in our valley think this way, too, but I think of Timp as MY mountain. I’ve stood on its summit, I’ve traversed its highest ridge; more than that, it is a constant positive presence in my world, always there in the background with its moods and weather and changing beauty.

This morning when I said hello to Timp, the south side was outlined with morning light, while clouds were just starting to roll over the north half. I stood looking at it for a bit longer than I really had time for—needed to get kids up and make breakfast and get them out the door—but it felt so…apt. A vivid representation of how I have been feeling lately, light being overcome by darkness. 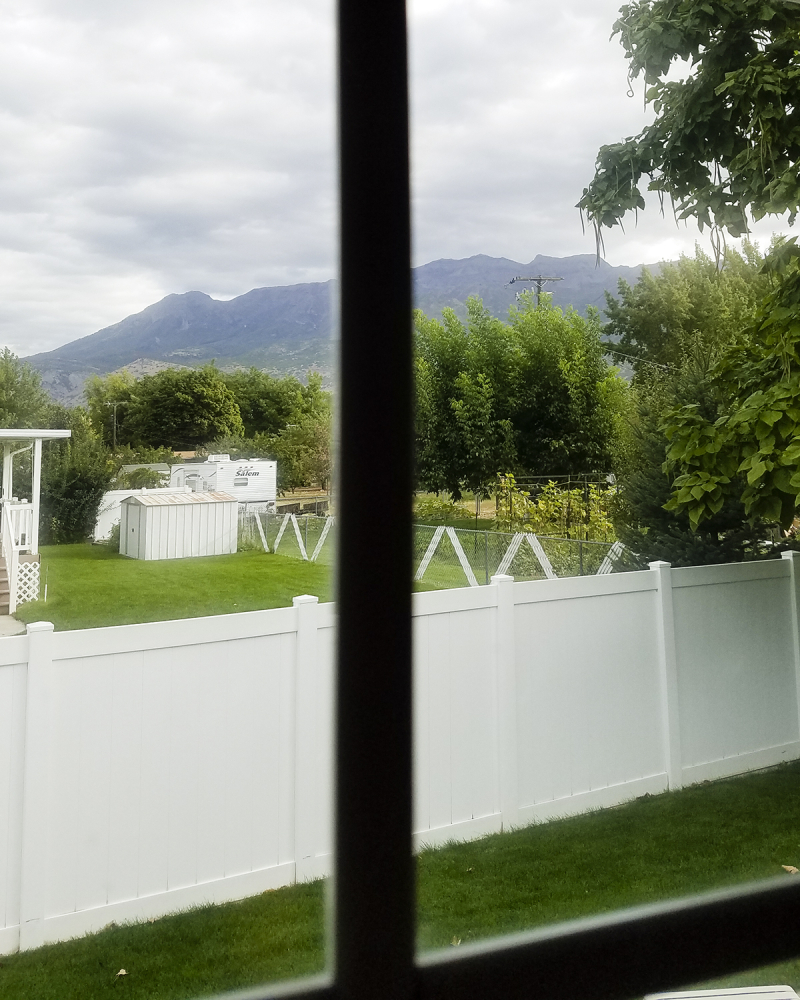 I wrote a bit this last winter about my struggles with depression. It started early last fall, as the stress of yet another surgery for Kendell finally caught up with me (seriously…in 12 months he had three serious heart issues and by the last one it was just…brutal; a bitter, boiling stew of fear and sadness and worry and wishing it was different and feeling bad for his pain but not being able to fix his pain and…everything else.) It got worse even while he recuperated, but then it got really, really bad. Sometimes depression is manageable until there is one thing that triggers it and then it isn’t manageable. And there was a great big triggering event—or experience, I guess, that started in December and went on and on and on.

As fall approaches, though, I have been feeling like this morning’s view of Timp. Still partly in the light, but the darkness is encroaching again.

Last winter, when I finally dragged myself to the doctor because I just couldn’t manage anymore, he thought my symptoms—the tiredness and lack of energy and the fact that I was gaining two pounds a week—might be because of an adrenal tumor. You’ll understand how desperate I was when I say: I hoped it was a tumor. A tumor I can understand. It can be managed with surgery.

It could be fixed.

Then after all the tests he found there was nothing wrong with me, physically. Heart, lungs, blood, hormones, even my adrenal glands: all normal. Except I was making huge amounts of cortisol. His suggestion (along with a Prozac prescription) was that I do things to manage my stress better. He suggested that I take up exercising (I already exercise) and a creative outlet (do writing, scrapbooking, and quilting not count?). He suggested meditation. Tai Chi. Yoga. Seriously. I think I looked at him with a mix of bafflement and frustration on my face because he literally put his arm around my shoulder. He said “Many people wrestle with this. Your body and your emotions are more connected than you think. I can’t find the way for you to manage your stress. You have to find it.”

So I took the Prozac, and really: it has helped. It’s helped in strange ways that deserve their own blog post, but partly it’s helped by letting me care a whole lot less. Without overthinking and overfeeling everything, I have been able to start separating. What I need to change about myself from what is not in my control; what really helps me (exercise, creativity and—a new discovery—sunlight and heat) from what doesn’t (caffeine and sugar, namely); who to share my energy with and who to preserve it from.

But I don’t think I have figured out enough. Or maybe the depression is stronger than the Prozac. Or maybe I am letting feeling and thought overwhelm me again. Because this season which I usually love, autumn which I live for, doesn’t feel orange and creative and beautiful. Instead it feels…looming. A harbinger: if fall comes, then winter is not far behind. And last winter was dark. So dark. I almost feel like winter is stalking me, waiting patiently to pounce. I’m not sure I can survive another Narnian winter.

I didn’t take a picture of Timp this early morning. I needed to wake up the kids and my phone was in my bedroom anyway. When I returned to looking out the window, after everyone had left, I saw that the light was gone and the clouds were getting serious. There’s a storm coming, and I hope it is a wild one. I want to stand out in the wind and rain and see if the weather can blow away my darkness. Or maybe just standing in the storm will remind me that storms don’t last forever. Maybe the weather in fall—dark then bright, hot then chilly—can be a metaphor I can cling to. Maybe it can remind me to seek out the light, or to wait patiently for warmth to return.

Or maybe I need to learn how to bend with the wind.

To end, a snippet of a Stanley Kunitz poem that has been repeating itself in my head:

Blue poured into summer blue,\A hawk broke from his cloudless tower,\The roof of the silo blazed, and I knew\That part of my life was over.

Praying this winter will have more light for you to navigate by than last winter. I also love fall, but struggle not to think about the dark, cold, and daily snowy commutes that will follow. It's hard to live in the moment. Our modern existence certainly doesn't encourage it. Two different days this week I picked up a fall leaf on my walk from the parking lot. I need to find things like that to focus on -- ephemeral, beautiful, of the moment. Yes, winter will come, but so, again, will spring. Happy Friday, Amy.

Sending lots of love your way. I empathize so much with what you are going through. As for the whole winter-is-coming thing - I really struggled some winters here in Seattle. What helps me is to keep going outside for exercise no matter what the weather is like (which I'm sure you already do) and getting one of those little happy lamp things to use in the mornings to mimic sunshine exposure. The last thing is the same as what Laura wrote above: focusing on those little beautiful moments. But I also know that that feels impossible sometimes. (I also know that it can get annoying when people keep making suggestions of what might help when you really just want to vent and get these uncomfortable feelings out, so I'll shut up now...but know that I am hear if you need an empathetic ear.)

i really admire and enjoy your writing; i'm so glad to have been pointed to your blog. as a medical professional, and as a fellow human being who has had depression - remember that anniversaries are hard. not just anniversaries of the event(s); but of those times when you felt very dark and hopeless and overwhelmed and depleted. email me if you ever feel the need.