Home Archives Profile Subscribe
Scrapbooking is Cool. You Can't Know That Unless You Try it Though.
Banned Books Week

Third Week of Weekly Reviews. Including a Recipe!

(I know. I'm as surprised as you are that I've actually stuck with this goal of mine! Not only that but I've been taking more pictures just to make sure I have a few to pick from each week.)

Last week was a little bit crazy. Big mood swings and I had some awful headaches. On Friday I melted down completely. But we got tons of rain, and that meltdown triggered something in me, reminding me that I don’t have to be a victim to my mood. I know what I need to do and this week I just need to do it: run more, consume less sugar. Even if it rains!

My favorite picture from last week: 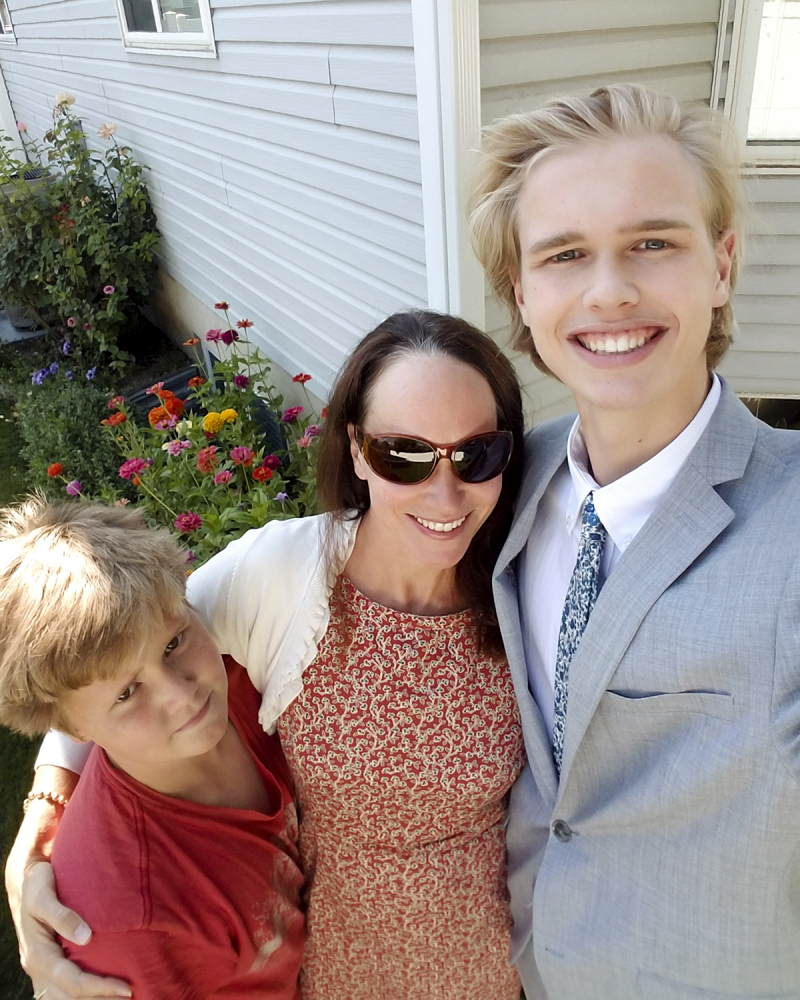 We took this selfie last Sunday. I love it because Kaleb is smiling! (He’s at that age where he hates having his picture taken and so he’s really, really hard to photograph.) That dress I’m wearing is the oldest piece of clothing I own; I bought it in 2003 when I was teaching, and I still love it.

Last Sunday was my week to teach in church. This is always difficult for me. I wrestle with church history and some of the doctrine, but I usually find a way to make a decent lesson. Last week I talked about the handcart pioneer disaster, which is near to my heart as I had ancestors who survived it. Mostly, though, I talked about how we can help to rescue the people we love. It is harder now, more subtle. More about loving and accepting and just…seeing what is needed rather than assuming that all of the answers fit everyone. I’m working on that. And I know in the end only Christ can save anyone. Even me. (Especially me.)

I did a little bit better with cooking this week. On Sunday I made sweet & hot meatballs (recipe at the end of this post) and on Friday we had grilled burgers and brown rice. OK…not much better. But a little bit. Places we ate out:  Pizza Pie Café, Costa Vida, and Mi Ranchito. I guess we did have leftovers one night, and sandwiches another night, so it could’ve been worse. Pizza Pie Café is a buffet-style restaurant, with pizza, salad, and pasta. (It’s where Jake, Nathan, and Haley have all worked.) When we were eating there on Monday, I asked Kaleb what his favorite pizza there is. (Mine is the chicken ranch, which is weird because I don’t really like ranch, except when it’s topped with grilled chicken and plenty of salty mozzarella I guess.) He thought for a second and then said “garlic knots are my favorite pizza.” Which made me giggle a bit!

I went to ballet barre class on Monday, and I ran only once. The cold weather snuck in and drained all of my running mojo. This week, I’m going to dig into some of my warmer running clothes and see if that helps me feel motivated. I have so loved running in the heat this summer that I’m sort of dreading running in the cold.

Nathan and Jake both had appointments with the dermatologist, but not on the same day. That’s three dermo appointments in six days. That means I saw the dermatologist more than I saw my own mother last week. We chatted about his awesome experience seeing the eclipse last month and I tried not to feel bitter that I didn’t go and see it too. (Maybe I should’ve just hitched a ride with my dermatologist? Seeing as how we’re besties now???)

It’s always good to spend time with Jake, even if it is bonding over wart-removal techniques.

On Monday, I mowed the lawn while Kendell went to the gym, and then when he got home I asked him to help me get an enormous weed out that was growing between our fence and the neighbor’s. Turns out there was an enormous hornet’s nest back there and he got stung twice. Not so fun.

Kendell and I went to see It. And then a couple of days later I bought a copy of the book. It’s been calling to me for a couple of months now, and seeing the movie finally made me give in and get the book. I read it when it first came out—when I was 14—and I don’t have the clearest memories of it, except I remember that I enjoyed it, plus a few snippets of images (Bill riding his bike with Bev on the handlebars is the clearest). I’m about 50 pages in and I’m discovering that I can’t re-read this in the same way I read it the first time, which is true of any book but especially true of Stephen King. I find myself reading to understand how he does it, rather than just for the adventure and terror. We’ll see if that keeps up or if I can sink down into the story.

Kaleb had two soccer games this week. The Thursday game was in Highland and the storm was coming in. It was so cold and windy. I managed to survive because I happened to have two cardigans with me, lol, but Kendell was in shorts and flip flops and he was freezing! Kaleb scored at each game; they won their Thursday game and tied their Saturday game, with Kaleb getting a goal about two minutes before the game was over to tie it up (which I didn’t get to see because I was at work). He is enjoying soccer so much more this year. It helps that his coach is pretty even tempered and balances out who plays which position, so Kaleb isn’t always stuck being the goalie. (In fact, he keeps it a secret from his team, that he’s really good at being goalie, because he hates playing that position!)

On Friday Nathan asked me to make him lunch (he comes home for lunch quite often) and I was so grumpy and sad that I said “nah, I don’t want to fix lunch” and so we went to lunch instead. (Oooops, add that to my list of places I ate this week!) We went to Panda Express, had a nice chat, and I left feeling a little bit happier.

Kendell and I watched the series episode of one of our favorite TV shows, The Strain. We also watched a lot of news together, and ranted about politics. Every day when we wake up, he’ll turn on the TV to check the news, a habit he picked up during the election last fall (I would rather have no TV on in the morning) and I always say “what fresh new way has trump ruined our world overnight?” It’s hard to believe we are living through such strange times, earthquakes and hurricanes and an enormous baby as the president of the United States.

Anyway. Here’s to a week with fewer headaches and more running, fewer restaurants and more cooking! And here’s that recipe:

Mix all of the sauce ingredients together, adjusting spices to your heat preference. Add meatballs (I just use the ones they sell at Costco…making my own meatballs sounds nightmarish) and heat through. Serve over coconut rice (which is rice with some portion of the water replaced with coconut milk).

I haven’t made these in forever and I forgot how much everyone likes them. Nathan came home from a date with Bailey on Sunday night and had a second helping before he went to bed! Yay for dinners that no one complains about.

It's nice that you and your husband can rant over politics together. I can't do that with mine unfortunately. I do try to get a little dig in once in a while though. ;)