Home Archives Profile Subscribe
The LDS Church and its Relationship with Abuse in Marriage
18 on the 18th: February edition

Yesterday was my 26th wedding anniversary. Twenty six years…I’ve been married for much more than half my life. Sometimes my marriage has been difficult, sometimes fantastic, which I think is typical of most marriages. I don’t think it is ever easy, and sometimes I still look at Kendell and think wait a second. Who the hell are you?

But we are making it work, and I think our marriage has definitely improved, especially over the past five or six years. Maybe you have to be in your forties before you really start to understand what is worth it and what isn’t? I don’t know. 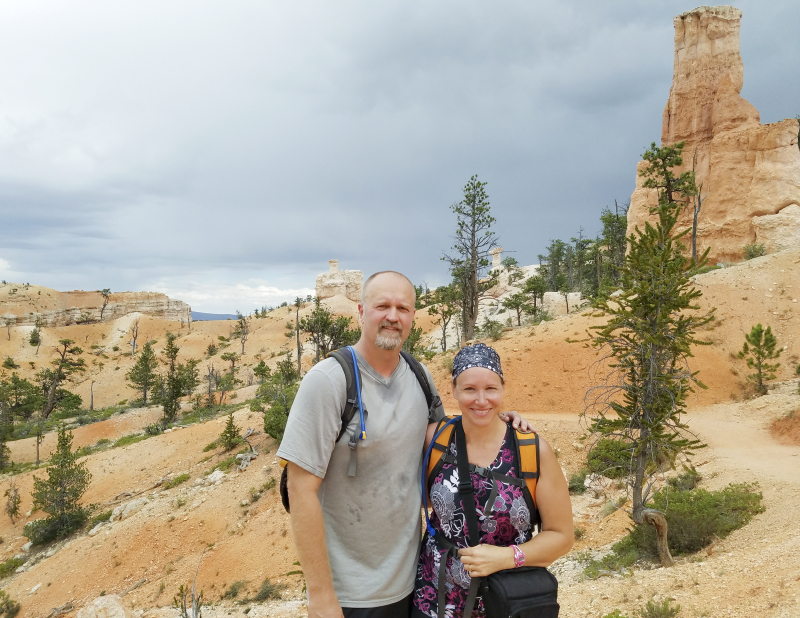 I’m just glad we made it this far. And I think the way I will celebrate this year is by running a marathon. Twenty six miles for twenty six years, yes!

Yesterday was my friend’s birthday, too. She posted a birthday summary and I thought it would be fun to answer those same questions but in the context of my marriage, instead of a birthday.

How will you spend your anniversary? Kendell went to work and I took a mental health day. I needed some solitude, and it was lovely. (Yes, I do see the weirdness in the fact that if I could ask for any gift for our anniversary, it would be time to myself. But that’s just how it worked out.) In the late afternoon, I went running while Kendell took Nathan to the bank. We’ve been trying to find a new car for him, as the ancient and battered Prism he’s been driving is just not going to work when he is off to college. A wise loan manager convinced them both that the car he’s been thinking about buying is definitely too expensive for him. He was sad but he knew it was true. I ended my run at the bank, and then the four of us (Nathan’s girlfriend Bailey was also there) went to Costa Vida for dinner. (Is it obvious that we don’t make a huge deal out of our anniversary?)

Compared to this time last year, are you: a) happier or sadder? b) thinner or fatter? c) richer or poorer? A. Happier, as last winter was really, really difficult. B. Kendell is the same, weight-wise; I am thinner than I was last year at this time but still need to get out from under about ten pounds. C. That’s a loaded question! Last year we had to replace our roof, and we went on three trips, so in a sense we are poorer. But we’ve also managed to save some money, so…both?

What did you do last year that you’ve never done before? We took all the kids to Hawaii. Haley had been to the Big Island, but the rest of us hadn’t. Snorkeling as a family with dolphins was one of the highlights of my life! Went to Ventura, hiked in the Los Padres national forest in California. Actually, now that I think about it, that’s the first time we’ve gone to California without the kids. Took the Staten Island ferry on our trip to New York City.

What was your favorite discovery last year? 1. The Footloose soundtrack is really fun to listen to while you’re driving across the California desert. 2. We really do take turns in being upset/frustrated with different things…which means we take turns in trying to cheer each other up. It’s much harder when we’re both upset at the same time.

What do you hope to learn this coming year? It’s not exactly “learning.” But I hope we come to a good decision about whether or not we should move. I really want a new house that is smaller than the one we have now (we don’t need as much space anymore, as come autumn it will just be me, Kendell, at Kaleb at home) and better designed, with a kitchen/family room combo space. Plus I think it would be good for Kaleb if we moved to a neighborhood with more kids his age. (Where we are, there is only one.) On the other hand…we’ve lived in this house for 24 years, and the thought of leaving it, the place where I brought my babies home and my kids grew up, not to mention my trees and rosebushes and flowers and neighbors: that also rips my guts out. We keep going back and forth with this decision and I just really want to figure out what is best and then stick with that choice.

What would you like to have this year that you didn’t have last year? Stronger relationships with our kids; less stress and more peace. 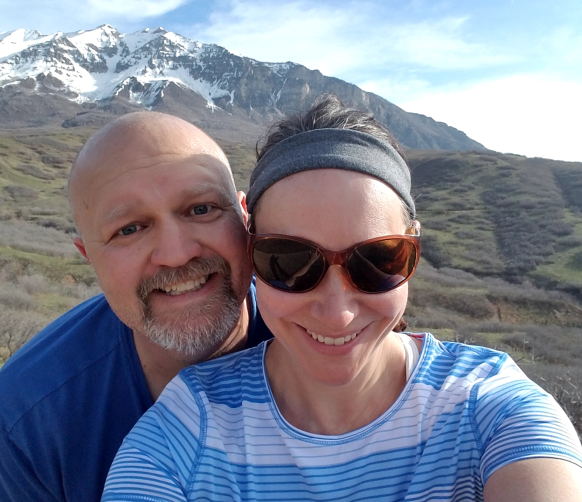 What was your biggest achievement over the last year? Kendell: No hospital stay! Got a new job. Amy: had an essay accepted for publication; ran a half marathon. Us as a couple: We really do understand each other better this year. We’ve had several ah-ha revelations about each other.

What was your biggest failure? Not picking up on the clues that Kaleb was having trouble with “friends” at school. Losing our tempers and shouting too much.

Where did you travel this year? Hawaii in May with the kids. We drove to Seattle because the flights there were much cheaper (really, the only way we could afford to take everyone to Hawaii was those cheap flights) and I sort of fell in love with the Pacific Northwest. I’ve never been somewhere where I thought “If I had to move here it would be OK,” but I felt that way about Seattle. California in August. This was a trip that was meant to be the four of us…me, Kendell, Nathan, and Kaleb. But Nathan couldn’t go because of a volleyball tournament, and Kaleb didn’t want to go without Nathan. So instead, it was just the two of us. We spent one day hiking in Bryce Canyon and camped there overnight. Took a day to drive from Bryce to Santa Barbara, stopping at Zion on the way. We mostly just putzed, relaxed, walked on the beach, drove around, but there was also some hiking. One day we took a boat out to Santa Cruz island and hiked; one day we tried to find a waterfall that was apparently dried out, despite what my guide book said. It was a relaxing and lovely little getaway and the one I said was to celebrate our 25th anniversary (a little bit late). New York in November. This is our second fall of going to NYC. We did some different things this time and fell more in love with the city. 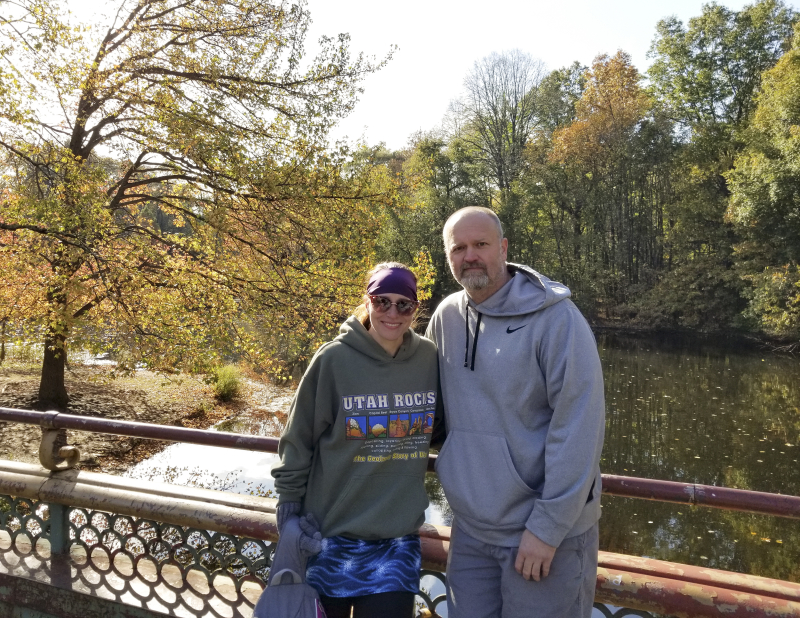 Do you have a destination in mind for next year? I’m feeling a hiking trip at the Grand Canyon coming on—I’ve only been there once, when I was a kid, and Kendell has never been. I’d also really like to go back to Seattle. I’m planning on running the San Francisco marathon in July (but I am not going to commit until Kaleb has his heart check up next week, just in case).

What did you get excited about? Our new car. We’ve had a minivan since December of 2000. But we sold ours this summer (after getting home from Seattle) and got a Highlander, since we don’t need so much space. It’s been fun…it feels like our first grown up car!

What do you wish you’d done more of? More hiking. Kendell’s knee bothered him all summer and we found out he has to have surgery on it (partial replacement next week). So we didn’t hike as much as we wanted to. Hopefully he’ll be healed by the time it warms up and we can hit the trail at least once a week.

What was the best book you read? Well, as Kendell isn’t a reader, I’m going to change this question to: What TV shows do you watch together? Grey’s Anatomy, SVU, The Walking Dead, Game of Thrones, Chicago Fire, Chicago Med.

What did you want and get? Lots of traveling. I

What did you want and not get? A totally healthy year. YES, Kendell didn’t have to have any surgeries. But his energy level is still low, and his knee bothered him for most of the year. I just want things to be even and normal. Also, a very snowy winter. We’ve basically had NO WINTER and it is driving me nuts.

What one thing would’ve made your year immeasurably more satisfying? Closer relationships with our kids.

What kept you sane? Me: running. Kendell: finding a new job at a company where he feels a little bit more appreciated.

What political issues stirred you the most? We both are pretty involved in watching politics and staying up on the news. We were never this involved in it until the whole trump fiasco. But when one of us gets going about issues like the environment, the cost of health care, the general sense of moral degradation etc we light up.

Did you fall in love? A successful marriage requires falling in love often. Sometimes he made me so mad I could shake him, and I’m sure he’d say the same thing about me. But we also drew closer together.

Who did you miss? Haley and Jake, who are out in the world making their lives.

What did you learn about your relationship this year? (I changed this last question.) We learned to trust each other more. Kendell really, really learned what Black Amy is all about (as he wasn’t around the last time my depression was as bad as it was this year) and that mental health issues are not weakness or silliness but real, debilitating medical conditions. I learned that he can understand that. We learned to be more patient with each other. And we are starting to realize that the next decade will bring several significant changes that are exciting…so growing older isn’t all bad.

26 Years! Go you and your hubby! Marriage definitely gets better as we continue to grow together over the years. Congrats.

You two are so damn cute!! This post made me happy. Happy 26 years and counting!