Book Review: The Bear and the Nightingale by Katherine Arden

A long time ago, when the scrapbooking world was much bigger, there was a website, dMarie, where scrapbookers gathered. I can't even remember now if they sold actual product or there was just a gallery (for sharing your layouts with others) and forums (for chatting with like-minded scrappy people). I discovered it in 1996 (when I still had a dial-up modem!) and made many on-line scrapbooking friends there. One woman, who went by the user name Red Molly (I was April Amy), deeply intimidated me. She was smart and funny and knew about books and was an inspiring writer. I admired her for a long time but didn't interact with her because she just seemed so COOL. Then she announced she got a writing gig for a scrapbooking magazine, and for a few minutes I was filled with hatred. (You know...the hatred caused by jealousy and longing.) And then I thought "get a grip, Amy!" and I set out to become her friend.

She was even cooler and bad-assier and awesome than I had imagined. We got to meet once in real life, AND I met her mom, and we're still friends on Facebook. 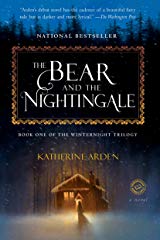 The story is based on Russian myths and legends, telling the story of Vasya, who is the only daughter and youngest child of a successful merchant. Her mother, a princess from Moscow, died when Vasya was just newly born, and so she is raised by her brothers and her nurse, running wild in the countryside but always coming home to listen to stories. Her favorite is the story of Frost, who is the winter demon. As she grows, Vasya discovers she has an affinity with the house spirits and the mystical creatures of the forest, but when her father brings home a new wife from the capitol, her life abruptly changes. A devout Christian, Vasya’s stepmother refuses to allow any religious worship save that of hers. As the community turns away from their guardian spirits and turmoil begins to spread.

I really enjoyed this novel. The writing was excellent, the character development interesting and varied, and I got to delve into a mythology I don’t know much about. The otherworldly characters were vivid and creepy, even the good ones. The antagonists were varied, too, causing different types of problems for Vasya. Sometimes the strong-female-protagonist approach can feel forced, used to make a point instead of to create a character. But Arden creates an unforgettable and believable character in Vasya; she is strong, yes, and wild, and unwilling to bend completely to her stepmother’s demands. But she also has kindness, and self-doubts, and fears. There is also the familiar trope of a girl pushing against the boundaries society makes for her, but again: it feels like part of the story rather than a device. Plus, while this is the first book in a trilogy, you aren’t left at a cliffhanger. The story wraps up well, so that The Bear and the Nightingale could be enough if you wanted it to be. (I don’t! I’m just waiting until January, when the third book, The Winter of the Witch, comes out, and then I’ll read the second—The Girl in the Tower—and the third right in a row.)

Another thing I really loved about this book is that it strikes the perfect balance between fluffy and literary. Did it change my life with revelatory insight? No, but it also wasn’t fluffy at all. It was the perfect book for me to get lost in.

(PS: The author’s name is Katherine Arden. Elizabeth Arden is someone else entirely…but I keep having to backspace “Elizabeth” and rewrite “Katherine.” ha ha!)