Book Review: What Should be Wild, by Julia Fine

I’ve listened to more audiobooks this year than I ever have before, mostly while running or hiking. (“More” being subjective, as I still didn’t listen to a TON.) I got in the habit while I was training for my marathon (I listened to the entirety of The Hunger Games trilogy), started but didn’t finish several other books, and then, at the beginning of November, I was showing a patron at the library how to download audiobooks and I chose What Should Be Wild by Julia Fine as my example. 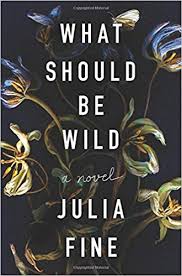 I’d read about this book somewhere, so I had a vague memory that maybe I wanted to read it. Instead of just returning it after I had taught Overdrive to the patron, I decided to leave it on my phone and try to listen to the whole thing. It joined me for many adventures throughout the month: sewing a baby quilt, deep-cleaning and destashing my scrapbook space, a few drives to Salt Lake, and several run/walks. It’s a slightly-spooky novel, and my favorite day of listening to it was the day I went out for a trail run, on a grey and cold morning; it started to drizzle before I got back to my car, and then lightly to snow, and the narrator’s voice and the moodiness of the story matched so perfectly that I didn’t want the trail to ever end.

It tells the story of Maisie Cothay, a girl who was born with an unsettling talent: she can kill or resurrect, just with her touch. She comes from a long line of women who are rumored to be cursed; their family’s wealth and large manor, Urizon, not strong enough to protect them all. Several in her line simply vanished into the wood around the manor, under different circumstances.

Maisie’s mother died while pregnant, but a sort of living death that the doctors were able to control enough to help her act as a sort of living incubator for the baby. Her father, Peter, is a scientist. He takes the baby home to Urizon and, with the help of a woman from the village, raises his daughter. It’s not a normal upbringing; she is sequestered to the house and the grounds, undertakes a sort-of homeschooling-via-books, and Peter treats her as a sort of living science experiment: what are the limitations of her talent?

Interspersed with the chapters about Maisie’s life are the stories of the other women of her line, the ones who vanished into the wood. The seven of them ended up there through different experiences, but all for basically the same reason: being unable to bend to the rules society imposes upon women.

When she is a teenager, Maisie’s world starts to expand when Peter disappears in the wood, and she has to go out into the world, and back into the forest, to try to find him. Simultaneously, she discovers more about herself.

There were several things I really loved about this book. I know not everyone enjoys books that switch around and tell a bunch of different stories, but that is one of my favorite fiction devices. I loved the stories of the women in Maisie’s line, how each one lived in different times, how each one got into the wood, how their personalities continued to influence them in the timeless summer of the wood. I like that the story explored the idea of ley lines, and wandering around the British countryside with Maisie. (The location is a little bit vague; obviously not America, because the women have been getting lost in the wood for a thousand years; moors are mentioned, so I am guessing England, but maybe it is Ireland or Wales or Scotland.) The menacing girl with dark eyes who wakes in the wood…she was interesting, too. Maisie's mother's story, and the concept of matriarchal family lines continuing to influence us (as well as our literal mothers themselves) and just the sheer strangeness of Maisie's power.

I enjoyed it quite a bit, in fact—until the end. I can see what the author was trying to do: what should be wild is women, and women’s nature, and it is not just all light, beauty, and gentleness as society says it should be. Women have darkness, desire, sadness, anger, ambition, but society tries to squelch it. The story is suggesting that only by embracing our full selves, both light and dark, can we be complete. But the end felt to me like a firework that sparks but doesn’t explode. All of the menace of the black-eyed girl was solved too easily; the ley line wasn’t really even a part of the story, and the terror just trickled away.

Still, I really enjoyed listening to this story. There are two narrators on the audio version of the book, one who tells Maisie’s story and one who tells the stories of the other women. They are different, but not jarringly so; just enough contrast to keep them separate. The book’s atmospheric mood was perfect for a November story. Glad I decided to stick with it and finish it (even with that disappointing ending).