Home Archives Profile Subscribe
Book Review: Half-Witch by John Schoffstall
The Grounds Outside of the Temple

on Nathan, or Wishing Time Could Stand Still 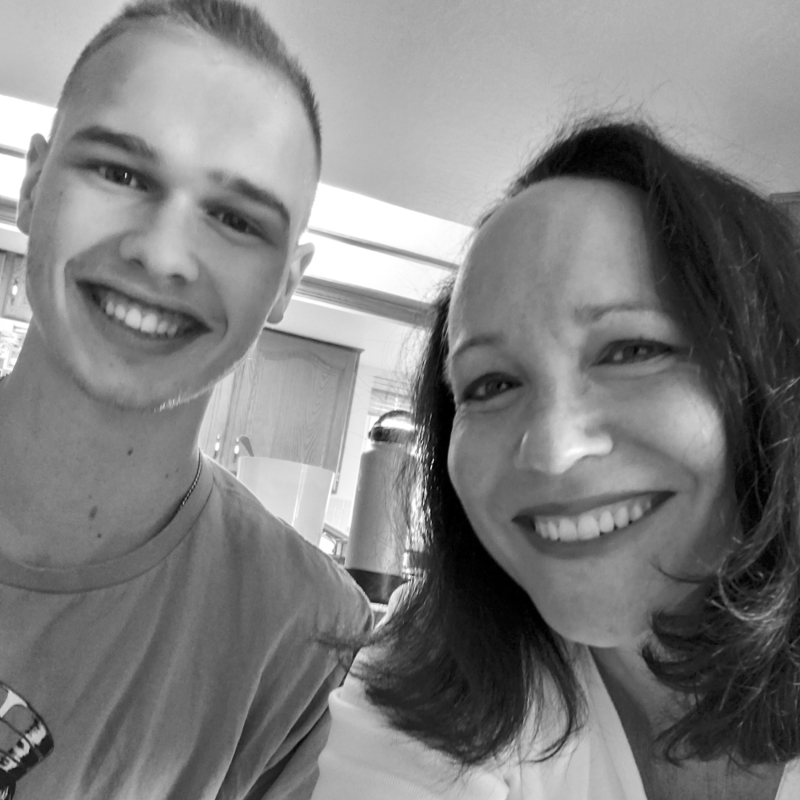 Right now he is here, sleeping like only he can, delved deep, burrowed under. He can sleep like this for hours, into the late afternoon some days. This will be his last morning of sleeping in at our house in his own bed.

Everyone in your life brings you something specific. Nathan brings me goodness. He tries so hard to be thoughtful and considerate of me. He makes me laugh. He reminds me that I am stronger than I think. He is insistent in hugging me, even when someone else’s kindness is almost too painful to bear. He is a light and a brightness in my life; sometimes I start to think that he is my only Person, the one person in my life who tries to see me and love me for who I am and not who they need me to be.

(Then I remind myself that that is too heavy a thing for a son to carry, and not his role or responsibility.)

He isn’t perfect, of course. He swears too much and dirty jokes fly out of his mouth. He gets annoyed at irresponsible or frustrating people. He loses his patience with his brothers and he shouts at his dad.

And thank God he isn’t perfect, because no one is.

I have a clear memory from the day he was born. Fresh to the world, he looked up at me, and I had an overwhelming sense of his nature, of who he would be. It washed over me in an almost-physical way, like a piece of cloth. The feeling was this: this child will be both gentle and fierce. Gentle and fierce. This feeling proved true, for he is both of those things. He is brave and he carries his softness in a brave way, not letting the world take it from him.

I thought on that day he was born that I had so many years, so much time of learning about him and teaching him and watching him become who he was. So much time.

And I did. “Nathan” means “gift from God” and that is exactly what he has been in my life. A brightness, a tenderness, a person I am endlessly grateful God gave to me. My son who loves knives and art, all at the same time, who can draw and paint, box and lift weights.

But it’s still not enough time. Or it just went too fast.

Right now, while I am writing this, he is sleeping. Sleeping under a quilt I made him.

But after I write this, I will have to wake him up.

Today, we will box up the rest of his bedroom. Much of it has already been packed, but today we will finish it. That last load of clean clothes will be dried and most of them will also be put into a box.

Tomorrow morning, bright and early, we will get up, and drive with him to Camp Williams. Then we will hug him goodbye, and he will set off on his new adventure. Basic training and then learning a foreign language in the National Guard.

This is not my first time having a child leave home. Haley went to college for five years, and now she lives in Colorado. Jake moved out with friends after high school. Nathan is not my first child I have had to let go of, to send out into the world with only my hopes and prayers around him, wearing clothes that I washed. I can do this.

But this feels harder, somehow. This feels more permanent. This is a beginning for him, but it is an end for me.

I know I will always be his mother. But this feels like the end of mothering him.

He will come home changed. I hope the changes are good ones: fiercer but also more understanding of the strength and importance of his gentleness. I hope that these experiences don’t cause the fierceness to overwhelm the gentleness.

I almost can’t breathe for thinking about all of the ways he could be hurt.

Tomorrow. In 24 hours…in 20 hours, I could sit down again at this same computer, in the office that is over his bedroom. But it won’t be his bedroom anymore. And he won’t be sleeping there.

All of the time, the days and minutes and seconds and weeks…they all dissolved, and what I am left with are memories, and photos, and the way his existence has made mine better. All I am left with his hope, and fear, and worry. But also I have courage, the courage he was born with that he shared with me. And belief that he will take his fierceness and his gentleness to other people as well.

No mother gets to keep her children forever. They all grow up and make their own lives, as they should.

But oh, it is bittersweet.

And I only have a few hours left to savor.

Gosh, Amy. I'm pretty sure you aren't a beer drinker but when I start going through this you're going to have to come sit with me somewhere while I cry into my beer.

WOW. Thank you for sharing, this brought me to tears. I will be saying prayers for your fierce and gentle son and his mother. You clearly have been the mother he needed to receive. As you navigate these new waters remember to grant yourself the grace that he would clearly give you. Deep Breath, you have got this.

Beautiful! There is no way to prepare for letting your child go out into the world. Best wishes to you and your family

He is a very special boy. I am so grateful for the time he spent in my home with Jake. I love his smile and his goodness too. I'm excited for his new adventures too. You are a great mom Amy. Hugs for the hard things, the letting go.

Definitely bittersweet. Our time with our children is so, so short. (((hugs)))