“They were connected: the world, her body, her face. Perhaps she should not be asking who she was but, rather, of what she was a part.”

“How do you stop being afraid? You don’t. But love and responsibility don’t give a person the prerogative to be always right. We can’t protect people forever.”

“I demand of you the Great Death. The death of change…the death of your way of life, the death that is not just an ending but a great and terrible new beginning.”

This science fiction novel, Ammonite by Nicola Griffith, made me think about many things, but one of them is the process that brings specific books into a reader’s life. I think that some books must be read at just the right time, and other books can be read whenever. For example, I hated The Grapes of Wrath as a high-school junior, but I loved it as an adult; seeing more of the world, understanding history and politics better, and going through different difficult experiences let me appreciate it as I couldn’t as an angsty, angry teenager. 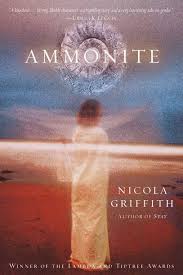 There’s always a loud clatter I am aware of, of books asking me to read them. This is partly because of my job, of course; it’s part of my responsibilities to know what is new and grabbing attention, and to have a wide knowledge of different genres so I can help readers with many different tastes. If no one wrote any new books for the next decade, and if I had unlimited reading time, I’m not sure I would ever be able to read all the books I want to read.

So how do I pick what to read next? Sometimes it’s a whim, sometimes it’s what comes up on the hold list (although I am much more careful now to manage my hold list so it’s not the boss of me), sometimes it’s a recommendation from a library patron. Searching for book covers for library projects has helped me discover several books I didn’t know about. I belong to a couple of books+reading groups on Facebook. Becky recommends things to me. Sometimes I search out something specific that fits my mood or the season (as with this winter, when I read Spinning Silver and the Winternight trilogy). Sometimes it’s because I’m sitting in the car while Kendell and I drive to yet another doctor appointment in Salt Lake, and I’m bored and I forgot my book, so I do some random searching in Overdrive and read something on my phone.

Sometimes the universe brings a book to me.

This was the case with Ammonite. This isn’t a new release, or a book that everyone is talking about. It was published in 1992. And yet, it kept coming up in different places, websites and bookish emails and random book blogs. Then, a couple of weeks ago, I realized it was written by Nicola Griffith, who also wrote Hild, a book I adored. So the next time I was at work, I grabbed it and started reading it.

It took me awhile to finish this. Not because I didn’t enjoy it, but because it feels like a book that requires slowness and savoring. I had expected it to be just another science fiction novel; interesting, but nothing unique. And, in a sense, it is classic sci fi: a human arrives on another planet with ideas about what it will be like, influenced by her life on earth and the company she works for, but the planet changes her utterly.

It’s that pronoun that makes the difference: her. The planet the protagonist, Marghe, arrives at, called Jeep by the massively powerful Company that discovered it, is peopled only by women. Centuries ago, when the first humans arrived there, they were hit by a virus that killed 100% of the men and roughly 20% of the women. This virus caused Company to retreat, leaving the (women) scientists on the planet as they did not want to bring the virus back to earth. When Marghe arrives, Company is in the process of reestablishing itself on Jeep, believing that in all those years, the virus will be gone.

However, the women who were left were changed by the virus, and humanity—women only—has changed to adapt. Marghe, an anthropologist, arrives at the planet to figure out those adaptions. How has the community continued without men?

That science-based question is what takes her to Jeep, but her exploration becomes much more than that. Her experiences fully integrate her into the planet and its societies. (The details are why you should read this book, too.) As I got further into the story, I started realizing that no, this isn’t a typical science fiction novel. It does feel very female. All science fiction strives to answer some sort of what-if question, and the basis of Ammonite is: what if there was a world where women could reproduce without men? What would an all-female society look like? How would it function, what would its strife be, what would its social structures look like and how would individuals work within the larger group?

What I loved about how the story answers these questions is that it is not all flowers and cookies. The group of scientists and soldiers from Company create a type of contrast: the represent, in the beginning, male structures, wherein everything is precise, ordered, and regimented. Yet, as they stay longer on the planet, some things soften; they decorate their spaces, for example, or paint their doors. And yet, within the native societies, women fill all necessary roles: some are what we might think of as “traditional” female roles, some are more “male.” But without the binary construction of male/female, the people are simply people, able to figure out the responsibilities and talents that fulfill their personalities. There are all sorts of women, not all fine, upstanding paragons of morality or nurturing. There is still conflict. There is love, betrayal, family, complicated politics. There are the sheer necessities of trying to survive.

But the details of the societies, their culture and myth and traditions and ways of being: these are entirely fascinating.

I’m glad I accepted the universe’s nudges to read Ammonite. And maybe this blog post can be a nudge to someone else to also read it.