Back in the fall of 2017, when I reread the book It, I realized (yet again) how my worldview is shaped by the books I read. I read It when it first came out, in 1986, and one of the things I discovered in rereading the book is how deeply rooted in friendship the story is. It gave me the idea that when you need a group of friends, the universe will provide one for you. I found myself thinking about this idea quite a bit after I finished the book, and I realized that this is a trope in many books.

It made me look back over my life and consider my friendships, and how they have come to be. As a little girl, I was painfully shy; add in the fact that my family didn’t really fit in to the approved social group where we lived, and yeah: I was kind of a lonely kid. Back in 1986, when I was 14 and reading It, I had two groups of friends, my gymnastics friends and my school friends. I counted on my gymnastics friends for some things, and my school friends for others, but I was unquestioning in my belief in their support for me. Over the next years, I learned to question. I learned that friends can betray you in a myriad of painful ways and that there are actually very few people you can trust implicitly.

But I also learned that those few are immensely valuable in your life.

As a young mom, I had a group of friends who were also young moms. We played Bunco together, took our kids to the park, gave each other nursing advice and newborn gifts and caffeine on exhausted days. I loved that group of friends, but I always kept myself a little bit shielded. Then, in 2000, my world was totally rocked when my husband was laid off from his job. Everything changed in the next 18 months, and one by one, almost every friend in my little group fell away. We couldn’t relate or connect anymore; they were worried about stuff like when their hairdresser could fit them in next and how they could buy another Dooney & Burke without their husbands getting annoyed, and there I was, worrying about whether or not we’d lose our house.

The few people who stuck by me during that time are still my friends, but I learned it again. Maybe in books people have life-long friends who never betray them, maybe in novels the Universe or God or Whomever makes sure you have support during difficult times…but in my real life, it wasn’t happening.

I have individual friends but I’ve never had a tribe.

I’ve also never read a novel that told my story: how introverted people who are guarded because of previous experiences create friendships. Maybe that’s a story no one wants to read, and that’s OK because sometimes my life feels pretty pathetic. Like, if I died tomorrow, who’d come to my funeral?

When my mom died, though (and, really: will I ever get to a space when I can write something that doesn’t refer to my mom’s death?), I had another realization about friendship within the context of my life. I do have a tribe. Some of them came to her funeral. Some of them came and took her fabric. Some of them brought me meals. Some of them sent me flowers or cards; some of them just hugged me, or silently squeezed my hand.

And all of them work at the library.

Librarians have a sort of strange reputation as dry, dusty, boring people who dress in cardigans and sensible shoes and care about uptight things like grammar and properly organized books on shelves and straight, tight buns without a strand of hair out of place. And, yes, OK, we do care about those things. (Although I actually prefer a loose, messy bun.)  But really, we are a vibrant and eclectic group of people. We love national parks and traveling and hiking. We bike, we run, we waterski. Not every librarian I know shares every one of my hobbies, but every one of my hobbies is shared by at least one librarian I know. (Except for scrapbooking… I’m still on my own in that craziness!) Many librarian friends quilt, others bake, others love flowers and gardening. A couple are runners too. Another librarian friend is my favorite person to send hiking photos to when I’m out on a trail, because she can’t hike right now (knee problems) but she loves seeing me do it. So I sort of take her with me.

This week at work, we had our regular staff meeting in a bigger room than normal, because there was going to be some kind of training and other people would be coming. I went to the meeting, sat chatting with my coworkers until it started, and the one of the librarians said “We’re not actually here for extra training, but to celebrate Amy!” and I looked around the room thinking “Oh, cool, I love Amy Monroe, she’s awesome!” and then I thought “wait, Amy Monroe isn’t here” and then I realized, “oh, wow, they mean me!”

Our library does this thing called the “You Rock” award. It’s a trophy sort of thing with a big rock engraved with the words “You Rock” and then as it is given to different librarians, their names are added. I’ve gone to many meetings where other librarians were given this award, but I’ve never really considered it as something I would be given. Because look at all the names on that trophy, names of smart, creative, wise, visionary librarians. I’m just me doing my little part-time work.

I was totally, completely surprised! 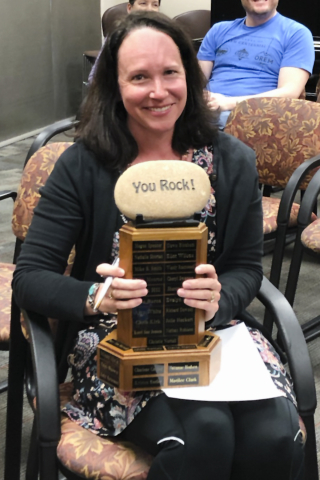 A few people at the meeting said some really kind things about me. And as I looked around and saw their faces, and thought about the other librarians who have left but whose work and friendship have influenced me in many ways, it really, really hit me.

Yes, we librarians are generally an introverted bunch. Maybe we’re a little bit boring. We like to talk about things like literary theory and the evolution of television drama. We can quote weird things no one else has ever heard of.

But we are also kind, passionate, intelligent people who are deeply committed to living life. Books help us do that. And other librarians do, too.

The universe really did bring me my tribe.

That is so awesome!

I love this! How great!