Home Archives Profile Subscribe
I Am The Ordinary, Medium Woman She Was Looking For
Book Review: Meet Me at the Museum by Anne Youngson

A few weeks ago I was watching TV with Kendell and scrolling through my photos on my phone, deleting those I didn’t need to keep. I’d not done this for a little while, so I started with January, and as I scrolled through, I started realizing: holy cow, I can watch myself getting chubbier! I hadn’t really noticed because my clothes fit very similar, but since this fall (I went back further in my picture gallery to make sure) I have grown a belly.

But what really pushed me over the edge was this photo of me and my friend Lynne on the saddle above Fern Canyon in the Flatirons: 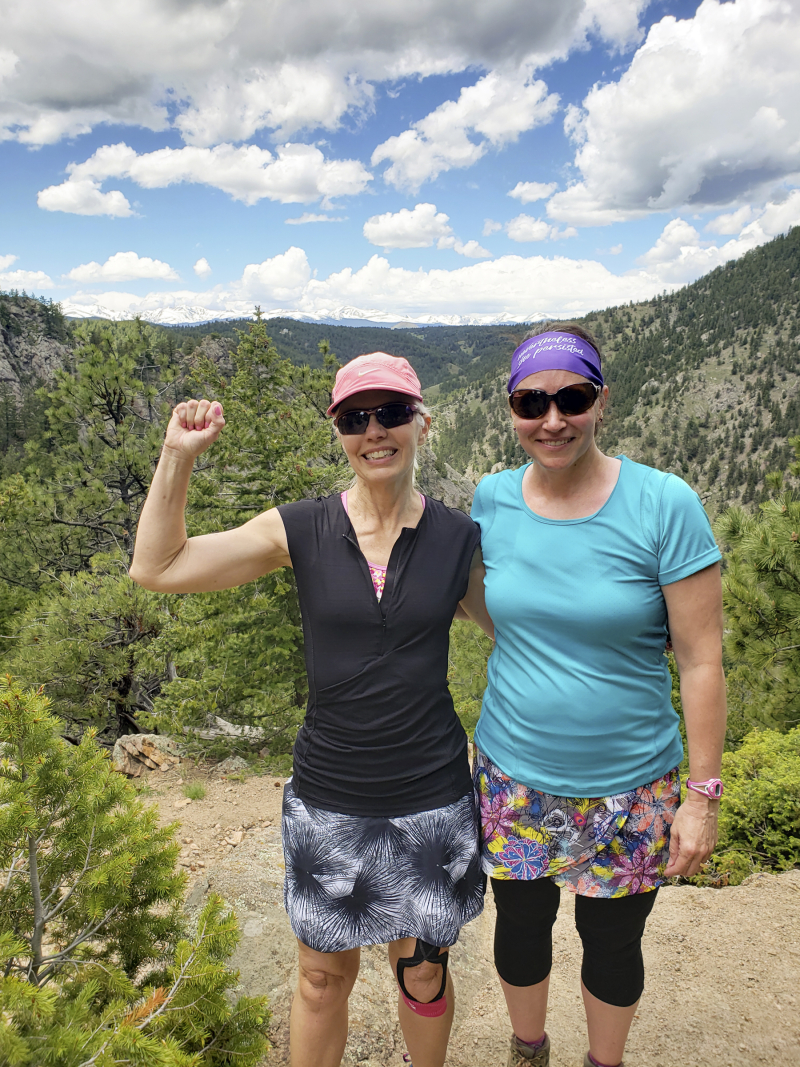 When I got back to our hotel, I texted the photo to Kendell, with a whole bunch of expletives and sadness and pointing out of my bulges and just generally freaking out. The weight isn’t just on my belly. It’s also above my hips and on my sides and on my face, and I made sure to circle all of the offending parts. As well as the way the skin on my hands is starting to look old for good measure.

Sometimes he doesn’t handle that kind of thing very well (he’ll make a joke instead of really listening to what is actually going on underneath my rant), but this time he was calm and kind and encouraging.

Which really reinforced the realization that I need to start working on losing some weight.

I let myself wallow in the self-hatred for a little while. I listened to my mother’s voice saying “wow, look how heavy you are.” I thought about chocolate and other treats, a litany of bad food choices to castigate myself with.

Then, a few days later, I took a deep breath. I thought: OK. This is the fact, without emotion but the objective fact: I just need to lose some weight.

I thought about all of the things I am already doing. I already exercise quite a bit. When I cook, I use healthy fats and keep an eye on sodium and sugar. I don’t drink soda very often, I very rarely eat fast food, I don’t eat potato chips. When we eat out, it’s usually at places like Costa Vida which, while not paragons of healthy eating, are at least not fried foods—and I never get the rice.

But obviously there are still some changes I need to be making.

One thing I finally did was research how I should be eating since I have hypothyroidism. (I’ve been taking medication for it since 2008 but never really received any direction as far as diet.) I got a couple of books from the library and read them, and I learned I’ve been taking my thyroid medication wrong, with not enough time after taking it before I start eating and taking my antidepressant too soon after my Synthroid. I need to get in to the doctor and have my levels tested; I think that, in January when our deductible starts over (unless something radical happens this year and we have to pay the whole damn thing again) I am also going to make an appointment with an endocrinologist if my regular doctor won’t figure out a different medication. (Something that balances both T3 and T4, not just one or the other.)

In both books, I read that people with low thyroid levels really do have a harder time losing weight. It’s not just because I’m lazy or overindulgent, although those contribute. It is harder for my body to let go of weight because of the chemical balances playing out in there. They both suggested that an hour of exercise every day is the goal to shoot for; it’s also important to focus on muscle strength.

Right now, I don’t exercise every day, and when I go running I am usually out for about 40-50 minutes. I know enough about running and about my body to know that I can’t just all of a sudden start running every day for an hour. But I’m going to make that one of my new goals: working up to running for at least an hour whenever I run. When I hike it is always longer than an hour. But I also can’t run or hike every day. So I’m going to add in a walk, and, if I am brave, a Zumba class. And some sort of weight training every single day. (Not an hour of it, but some every day.)

I also need to make some changes to my diet, but that will be its own post.

On Memorial Day, I noticed someone on Instagram was doing a Memorial-to-Labor-Day running streak. I thought that would be a great idea, but since I didn’t notice it until Memorial Day was over, the timing felt rushed.

So, instead, I am going to do an exercise streak, where I try to do at least 30 minutes of exercise (but always working toward being consistent with at least an hour) from the summer solstice to the autumn equinox.

I’m going to weigh and photography myself on June 21 (the solstice) to start. (I have been avoiding the scale since, I don’t know…October? November?) I’ll re-measure on July 21, August 22, and September 23 (the equinox). Hopefully in that time I will see some changes.

And because I am motivated by checking things off and keeping track of numbers, I made a chart. I printed mine on a piece of cardstock (double-sided) and am hanging it on my kitchen door so I can write down what I do every day. (And of course I keep track of all my runs, walks, and hikes on Strava because if it isn’t on Strava, did it even happen?)

I would really, really LOVE it if other people joined me in my streak! I’m going to use the hashtag #solsticetoequinoxstreak on Instagram (probably won’t post about it every day though) and will be giving periodic updates on my blog. Here’s the chart (it's a PDF) if you also want to play along (and let me know if you do, even if you’re not on IG or other social media places).

I’m really trying to be positive and encouraging with myself during this experience, rather than working out of a place of shame or self-disgust. It’s not about winning the skinny prize. It’s just about getting myself into a healthier, happier place with my body. I hope you’ll join me!

Posted at 11:50 AM in Running, Solstice to Equinox Streak | Permalink | Comments (5)

I think many people can relate to this. I know I can. I will join you. I'm not on IG, but I sm on FB.

Amy, I skim through FB without really stopping and reading posts, but I read yours today. Thank you for posting, this is what I so need. I printed out the chart and, more importantly I am committing to use it! Since I've moved to Wyoming I joined the small Health Club here and attended the weight lifting class. I was consistent for nearly four years and felt great! Then I developed bone spurs under my Achilles, wore a boot for too long, and just never got back to it. Plus the fact that my husband and I decided it was too expensive (which it is). I tried different apps and tried to run on my own with no success. I'm smack in the middle of menopause and the hot flashes and headaches and sleepless nights really caught up with me and all motivation to eat well and exercise left. I decided I could like my "new" body and not worry about being healthy. The problem is I felt crappy, except when I was eating. That snowballed into binge eating and soon I felt the telltale signs of the eating disorder than I thought I left in the dust back in my teens emerge it's ugly head. It all came to a head when I went in for my yearly exam and found out my cholesterol is high. That brings me to today where I am attempting to eat a Keto diet. Sigh. Not fun. I did well for three days, lost half a pound, and just ruined it when my daughter who just returned from Scotland and Ireland gave me some chocolate to try.
So, Amy, your post is what I needed today. I need to exercise. I need to enjoy my body, but I do need to change it too. I want to live a long life being active with my family. Thanks for sharing your struggles.

In that picture I see two happy woman on top of an f-ing mountain!