Last fall when I was restricted to only hiking trails with not a lot of vert, Kendell and I hiked to Silver Lake. I chose it because it was listed as “easy” on many of the hiking websites and apps I use, and the elevation gain didn’t seem too bad.

Aside from the last quarter-mile, which IS steep, it was a perfect trail for my knees at that time. When I got to the lake, though, I was a little bit frustrated, because I knew that there is another lake, Silver Glance—smaller but less crowded—about a mile up the trail, but with almost 1000 feet of elevation gain in less than a mile, definitely too steep.

Now that my knees are doing better (they are not healed and not “normal” but I can do almost everything I want to do, with a few modifications and a little bit of wincing) I decided that it was time to go to all the way to Silver Glance. 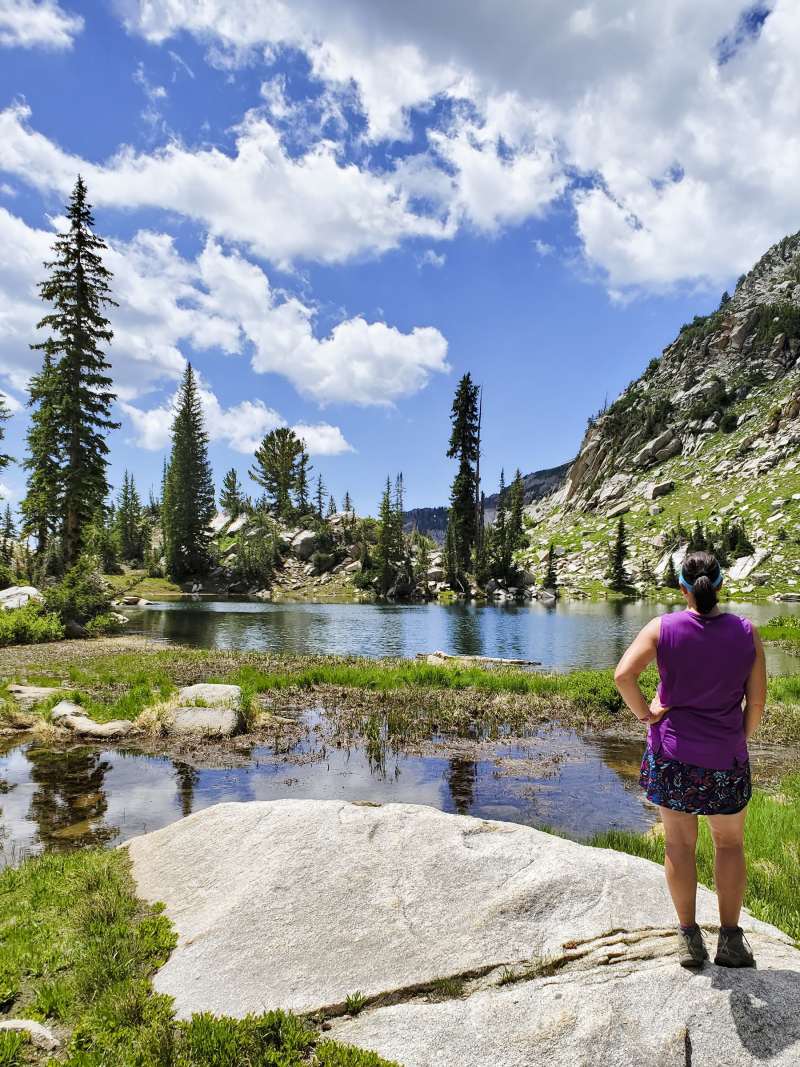 We have to time this hike carefully, because it’s not easy to get to. It’s in a canyon that’s about 25 minutes from our house, and then there is a three-mile dirt road to the trailhead that takes FOREVER to get up. (It actually takes only 20 minutes, but 20 minutes of jostling and bouncing in our old truck is a long time.) We’ve almost done it for three weeks now, but other things came up that required us to be home sooner.

But yesterday was the day.

When we hiked this trail for the first time, it was at the tail end of fall. Almost all of the leaves were down and there was very little water in the streams. This time, at the height of summer after a very snowy winter, it almost felt like we were on a different trail. It was so pretty, full of all different types of wildflowers, and the water was still raging. You don’t ever get to the waterfalls you can hear, but there are two stream crossings. I love crossing water, even if I get my boots wet. (Actually….I sort of prefer it when I get my boots wet!) Right by the second crossing, Kendell saw two raccoons! I turned left after the stream and wandered for quite a while before I realized the barely-a-trail, straight-up-the-slope “path” I was following wasn’t the actual trail, and plus, Kendell wasn’t behind me, so I had to backtrack, figure out where the trail was (RIGHT after the crossing, not left), and then I started hustling because I had no idea where Kendell was. A few minutes later I heard him hollering for me, so we kept track of each other by shouting “Aim!” and “K!” (“Kendell” just doesn’t travel well) until I caught back up to him. When we got to Silver Lake, we found a big, slanted granite boulder where we sat and had a snack. For about five minutes I laid back on the rock, closed my eyes, and tried to listen and feel everything around me. The wind in the aspens, the birds, the piney scent mixed with florals…I opened my eyes and looked at the layers of colors in the cliffs across the lake…the only way it could’ve been better is if the groups of hikers around us could also be quiet!

I’d read as much as I could find only about how to get to Silver Glance. Everything I read was super vague: “find the slight trail.” Clearly there WAS a trail, as people have gone there, but once we started looking for it, I just wasn’t sure. We did a few false trails before going back to the first one I’d tried with the goal of just seeing if it petered out or not. It didn’t! 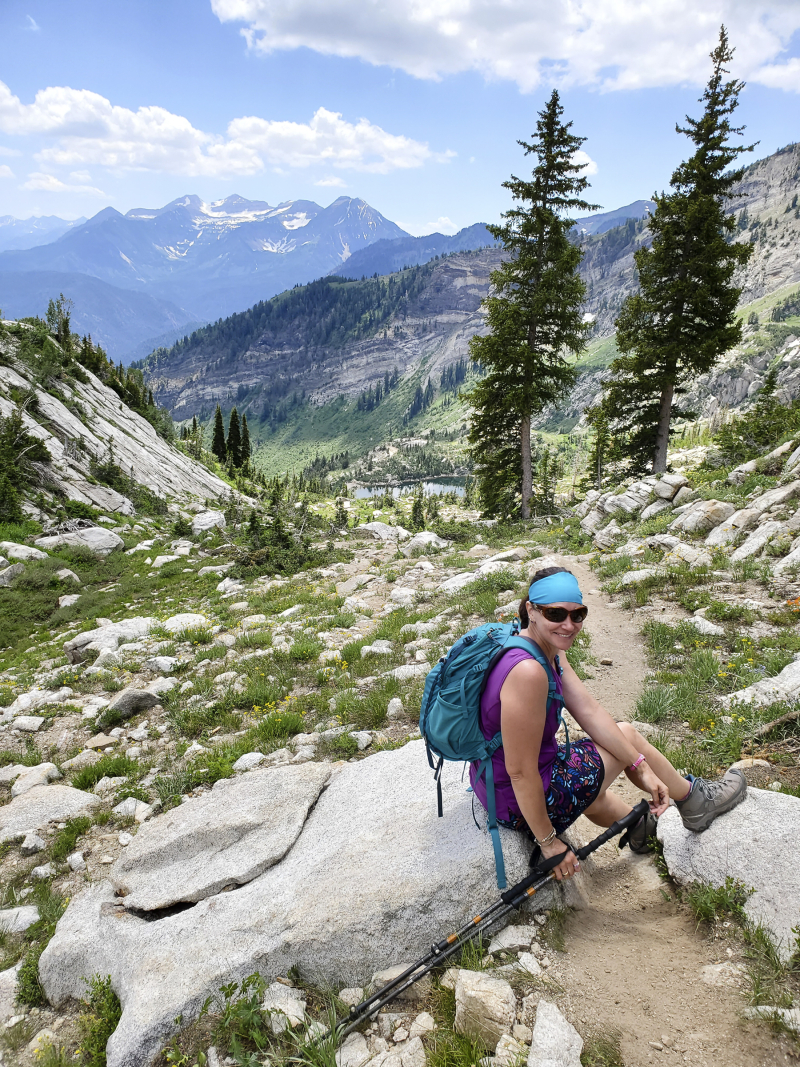 So, if you, too, want to hike to Silver Glance Lake, here’s how you find the trail. It’s not so much that the trail is “slight.” It’s that there are so many different little paths people have made. When you first get to the lake, turn right. Then look for another trail that is also a right turn. There are at least two right turns you could take (because I went up one and came down another). One is almost immediately after you turn right. The next one is just past a big white granite boulder. If you miss these and continue to move around the lake, you’ll get to a stream crossing and then you know you’ve gone too far. You want to stay south of that stream.

I was also not sure I was on the right trail because right at the beginning it curves south and I knew I needed to be going north-east-ish. But, keep going around the curve. The trail IS faint there, but push on for just two or three minutes and it gets more defined.

The trail from Silver Lake to Silver Glance is steep. And while the total elevation gain (about 900 feet) spread over a little bit less than a mile is steep but doable, it’s not a consistent uphill. You climb, climb, climb, and then you get to a flat meadow, and then you climb some more. So the climbing parts are actually more than 1000 feet per mile. You just have to settle in and realize it’s going to be hard and slow, but that’s OK.

It’s OK because it is a really fun trail. There are small boulders than kind of work like stairs. At a few different places you just walk right up the little stream of water. (I’m guessing that by the fall this is dried up and you walk up the dry bed.) The meadows have tons of large boulders that are great to sit on for a quick break and some water. And the flat parts feel so amazing to cross after you’ve pushed hard up the incline.

The BEST part about this trail, though, is the views. You have to look back to see them when you’re going up. As I usually hike in front on the uphill sections of a trail, I stopped several times at the high points and looked back for Kendell, and I loved being able to watch him ramble through the meadows with the north east side of Timp behind him. It was amazing. 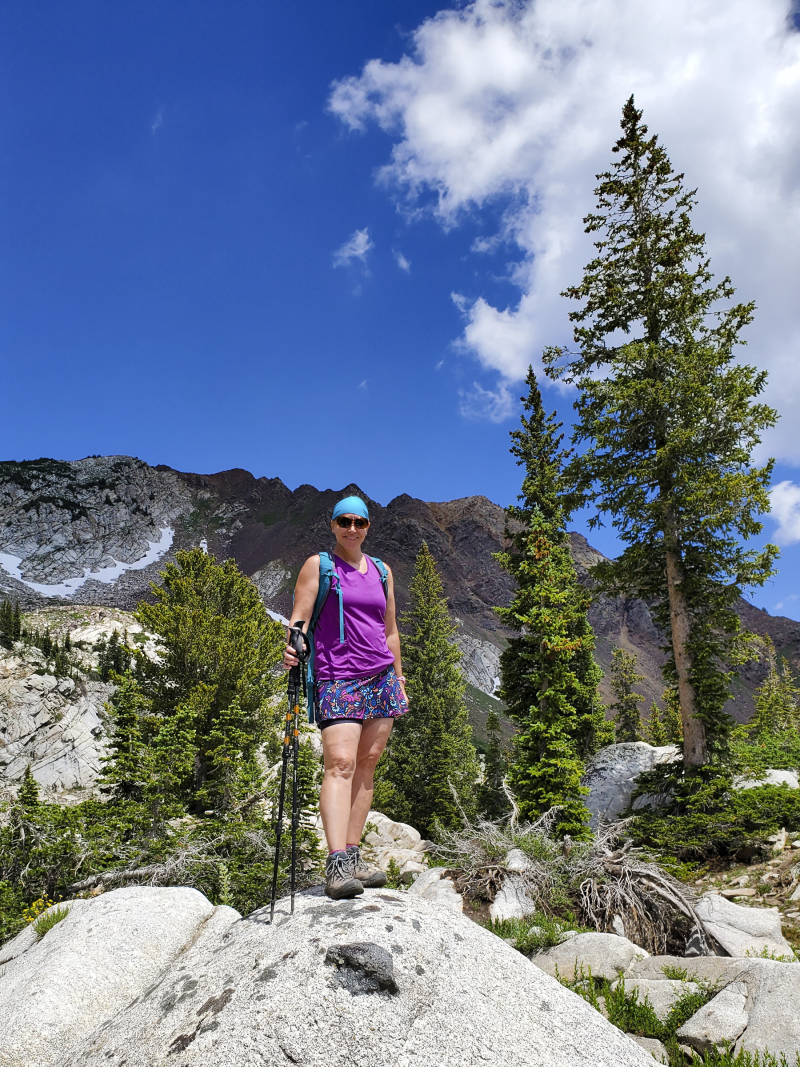 Once we got to Silver Glance—which really is much smaller than Silver Lake!—we wandered around a little bit. I had wanted to put my feet in the water but there wasn’t a really great spot to do it there, so I kept my shoes on. The views change dramatically depending on where you go, so if you hike up to Silver Glance, spend some time exploring. The lake sits just underneath Red Baldy, and you can summit Red from here, but you have to just find your way, there isn’t an established trail.

When we were headed back down, I stopped at a spot I had seen coming up, which had white rocks and a bunch of artist’s paintbrush. This is one of my favorite wildflowers but I haven’t seen any so far this year. I was so happy to find a bunch of it all over this mountain. I asked Kendell to take a photo of me there, and just as I got into place I heard a roar and a clatter. It took me a minute to figure out what I was hearing: a rock slide! A bunch of rocks were tumbling from the tops of the cliffs behind me. I didn’t look back…I just sprinted back to where Kendell was standing. I was slightly terrified but the slide was happening at least a half a mile beyond us, so we weren’t in danger. (I couldn’t tell until I turned around to look, but in my panic mode I distinctly thought Go! You don’t have time to look!”) We watched the rock slide until it stopped and it was crazy to see those big boulders bouncing and rolling. 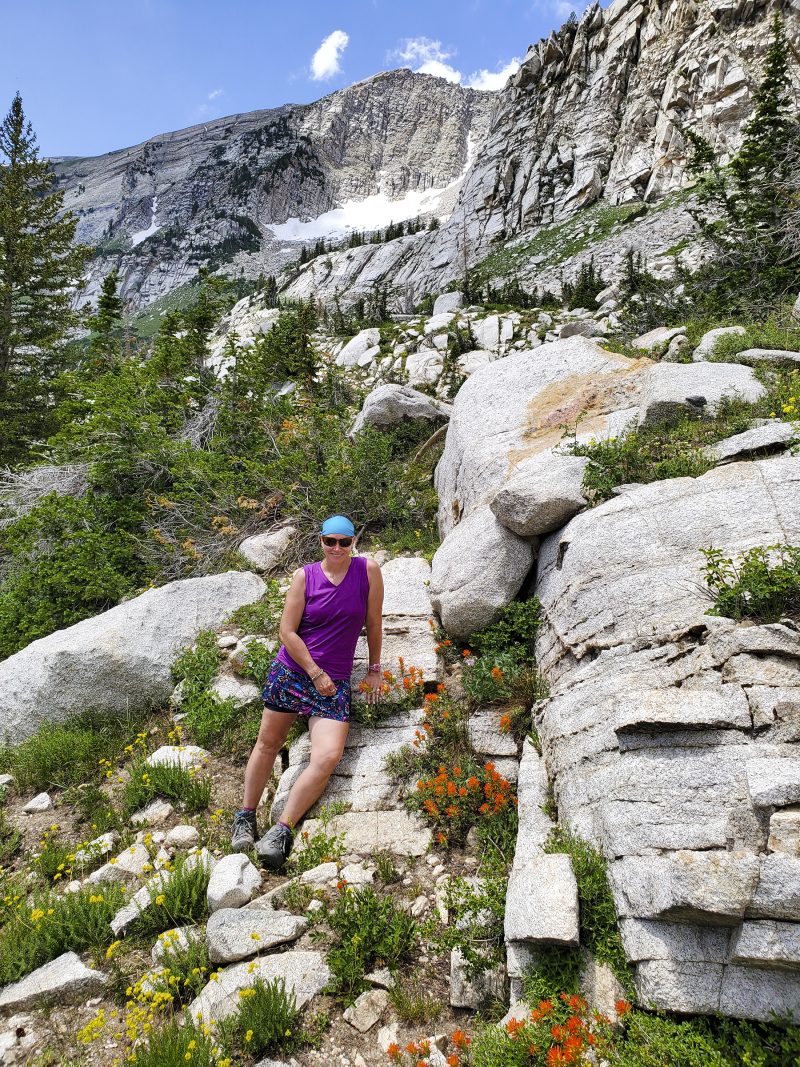 When we got back down to Silver Lake, I took a quick moment to dip my feet in the water. I’ve decided that I want to do this more when I am hiking (and it’s not against the trail rules for people to get in the water). The first time I got my feet wet on a trail was when we hiked to Half Dome, and it was almost a spiritual experience. It felt like a way of putting more of myself into the landscape, and besides: it is so refreshing to chill your feet. There was a big group of hikers by the water when I first got there, but they left before I got my boots off, so for a few minutes I had my feet in the water with no one else around. It was bliss! I’m so glad we did this hike again, that I didn’t get frustrated and give up on finding the trail to Silver Glance, and that I was strong enough to make it. It was an incredible day! Posted at 10:50 AM in Great Outdoors, Hiking, Solstice to Equinox Streak | Permalink | Comments (0)