Book Review: The City in the Middle of the Night by Charlie Jane Anders

"To join with others to shape a future is the holiest act."

"Part of how they make you obey is by making obedience seem peaceful, while resistance is violence. But really, either choice is about violence, one way or another." 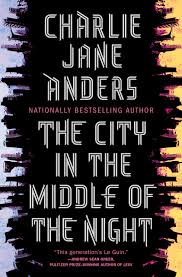 The City in the Middle of the Night continues my woman-based sci-fi reading streak. (I’m not really doing this on purpose, it’s mostly how the Hold List has been dictating my reading life, but I am enjoying it so it’s OK.) It tells the story of humanity after we have abandoned our own misused planet, spent generations traveling on a Mother Ship to a different place, and established life on the planet called January. January doesn’t rotate, so humans can only live in the slim belt of temperate twilight between the boiling-hot and the frozen sides. Humans have established two cities: the strictly-controlled Xiosphant, where citizens’ circadian rhythms are controlled by shutters and where social roles are narrowly defined, and the anything-goes Argelo, where anyone can do whatever they want.

The story is told by Sophie, who comes from the lower Xiophanti culture but has managed to gain admittance into the university, and Mouth, who is working for a band of traders called the Resourceful Couriers, traveling the dangerous road between the two cities. Sophie is in love (awe? thrall? Some emotion that is unhealthy) with her roommate Bianca, who is a member of the elite Xiophanti echelon but also likes to putz around with the underground rebellion. When she is about to be arrested for a minor violation, Sophie steps up and says she committed the crime. The police haul her to the top of The Old Mother, one of the mountains that protects the city from the worst of the weather, and leave her there to die.

Sophie doesn’t die, however. She has an encounter with a crocodile, one of the native species. But it doesn’t rip her apart and eat her. Instead, the crocodile saves her life.

This is the experience that the rest of the plot turns and grows on, as Sophie, Bianca, Mouth and her friend Alyssa begin to interact.

As the plot moves along, you get to experience Xiophant, some of January (including the Sea of Murder), and Argelo. Mostly the plot shows you that you can take humanity off of earth, but you can’t remove our capacity for wrecking a planet. But it also asks you to consider the limits of friendship, why we love who we love, what love really looks like, and whether or not people can change. All the while, politics and environment are starting to spin out of control, and Sophie’s relationship with the crocodiles—which she renames the Gelet—might be the key.

I loved many things about this novel, but my favorite part was the time Sophie spends with the Gelet. That is where the opening quote comes from, as she is learning how they have lived for so many eons on such an inhospitable planet. In fact, if I faulted this book for something, it is that it felt like there was too much time spent rambling around with people. Interactions with strangeness: while of course you go to other planets to see that people are people no matter the setting, you also go for the differences, and I would’ve liked more time in the city of the Gelet.

I also found Sophie and Bianca’s relationship compelling. As the story progresses you watch as Sophie begins to see that her feelings for Bianca are not mutual, and not just in a romantic sense. Bianca has mostly been using Sophie since she took her punishment, and it takes a while for Sophie to understand this. It is such a painful process, and sometimes she utterly frustrated me with how she made so many decisions based on a non-reciprocal love, but it also felt true to the situation. And: again, that is what I love about books. I’ve never been in Sophie’s exact situation—a girl on a strange planet in love with another girl who wants to lead a revolution AND be seen in gorgeous gowns at parties in mansions. But her struggle resonated with me because that process of coming out of the blindness of a damaging love and figuring out how to deal with it is a situation I’ve gone through. Watching Sophie struggle gave me a bit of insight into my own struggles that shaped me.

The one big complaint I had is the ending. I didn’t know that this was to be the first book in a series, or I would’ve waited to read it. The ending wasn’t a huge cliffhanger—no one is in mortal peril by the last page, and we know where all of the characters are. But the story just ends because that’s the last page of the book. I am glad the story will continue, but I am left feeling…unfinished. Like I still need to pick up the book and finish it, but I can’t because there’s nothing else left to read.

I’ve struggled with reading this year. I’m just so slow at finishing the books I start. Becky and I have talked about this and we think it has to do with grief. And so I am just moving along, slowly reading. Not sure what I’ll pick up next. The Testaments? Frankisstein? a YA novel that I could at least just finish quickly and thus feel like myself again? I don’t know yet. But I’m glad I managed to finish The City in the Middle of the Night, despite that unsatisfying end.