Home Archives Profile Subscribe
Book Review: The City in the Middle of the Night by Charlie Jane Anders
Oh, Please, Gerald. Sit Down. You're Not That Important.

On June 21 I set out to accomplish a goal: MOVE EVERY DAY between the summer solstice and the autumn equinox. 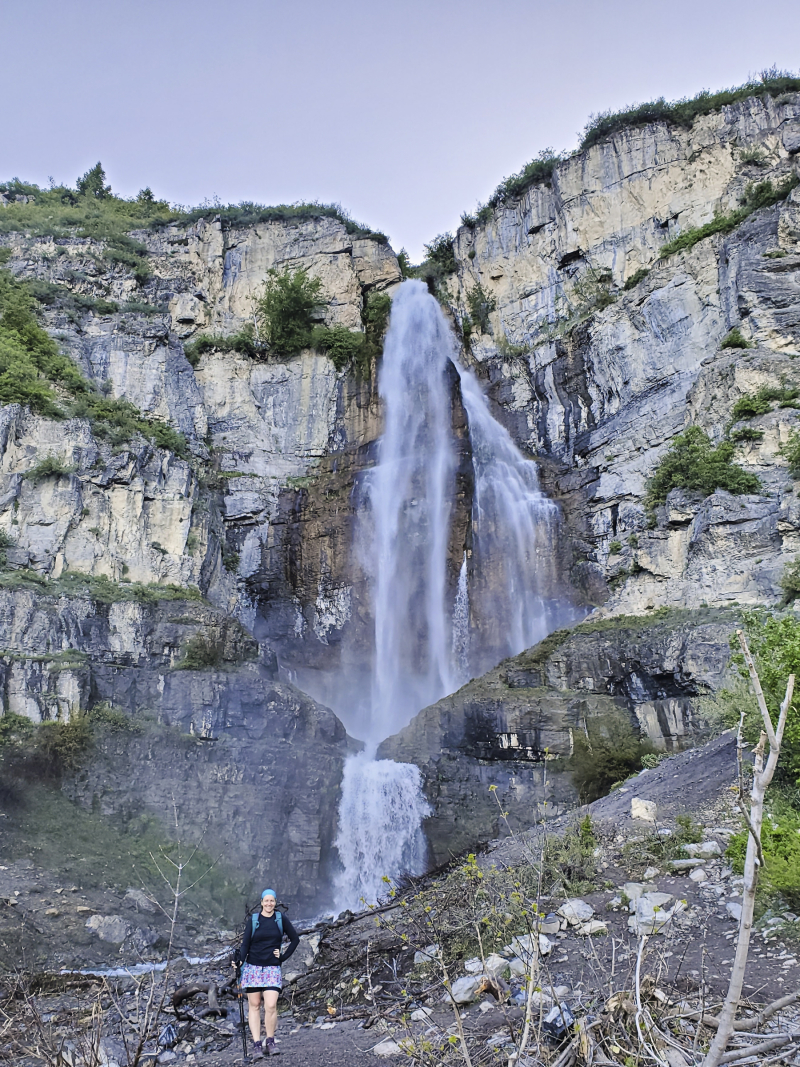 To make sure I didn't miss the very first workout of my streak, I did this hike after work. There wasn't a ton of light at the waterfall so this pic isn't fantastic. What isn't apparent, unless you hike here often, is how the area was just decimated by our winter of heavy snows. Trees down everywhere!

So here it is, September 24, the day after the autumn equinox, and I'm thinking about how I did and what I learned and where I'll go from here.

I did 20 hikes including yesterday's, which was, while short, an epic one because there was a moose on the trail, and we had to wait for him to move before we could go around. 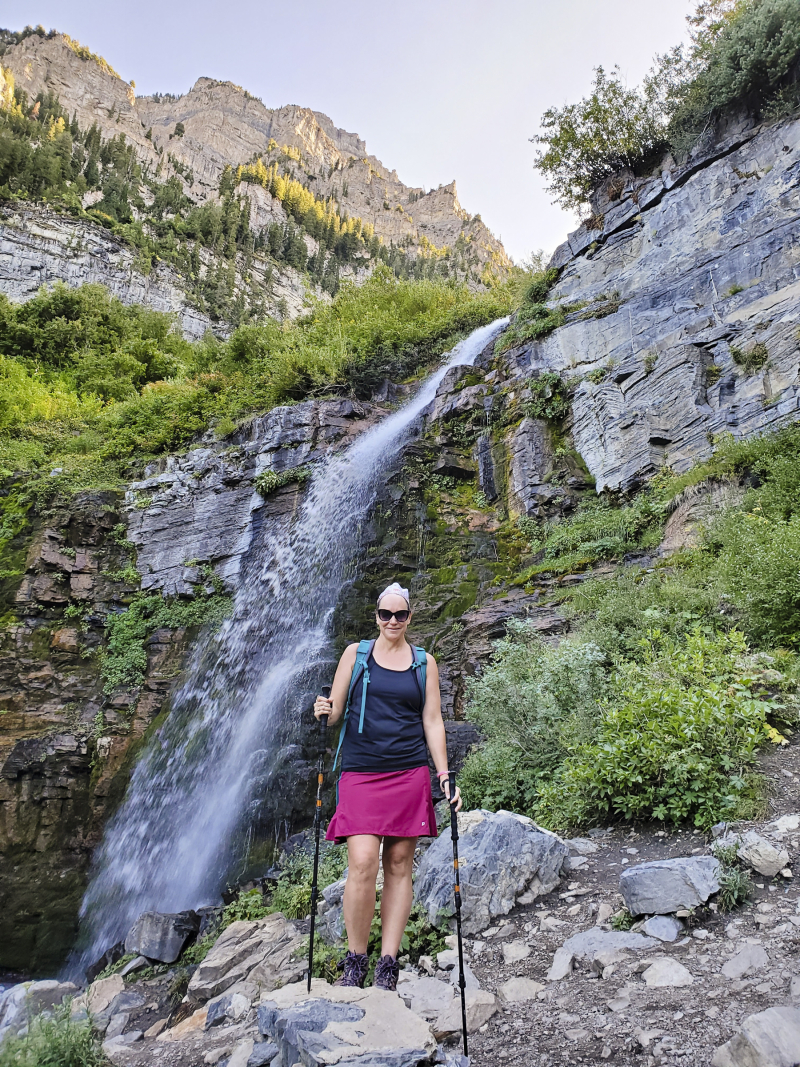 Same trail head as the June hike, but a different direction so a totally different waterfall. Early evening so still not a lot of light! This is a fun trail with several little scrambly spots and amazing views. And moose!

I'm feeling too lazy to scroll back through Strava and count my runs, but I ran about 45 times during my streak. Two of my runs were on the beach in Florida!

I did a few trail runs (three to be exact) and want to do more, but I think I need some trail running shoes and I haven't made it to the running store yet.

I went to one High Fitness class, which I really enjoyed but my knees sort-of didn't. (Squats are basically impossible for me.)

The rest of the days I did yoga or strength training of some sort.

I missed either one day or four days, I can't decide. When we were in Florida, on the days we were at Universal Studios I didn't do any other exercising besides walking around the park. I think that counts, as we went at least ten miles every day, but it wasn't all sustained, fast, high-cardio walking, so maybe it doesn't. (I know, it's my streak so my rules, but I can't help but think it was cheating.)

I lost not a single ounce, nor a millimeter of measurement anywhere.

That is, of course, super frustrating. Actually, as I sit down to write this, I find myself almost in tears over that fact. Especially because during that time, I developed a medical condition that requires me to give up chocolate, tomatoes, spicy foods, citrus, coffee, tea, yogurt. Chocolate was the one indulgence I wasn't restraining myself with at all, but after my diagnosis I have had almost none (one mint brownie at our city-employee lunch, one mint brownie at my aunt's funeral, and, yes: A bag of almond M&Ms I bought when we were in Florida because I was pissed at Kendell, and it was actually that moment when I realized how much I've been depending on chocolate for my emotional stability).

So, healthier eating and more exercising for (almost) three months, and not even a pound down? Not even a half inch somewhere?

In fact, my belly is even bigger.

Yes, that makes me feel like crying. (Actually, I *am* crying.) I had my gynecologist test my blood and my levels are normal. I have an appointment next month with my GP, but I already know what he's going to say: something about how my body responds to cortisol, and how the changing levels of hormones effects belly fat. {{{shrug}}} (Cue me going off on a rant about how the medical community is skewed towards men's health, as you can be damn sure if there were a falling hormone level that made something distressing happen to men, they'd have solved the problem decades ago.)

I do still feel like I had some results, if only that I changed some of my attitudes. I learned that having a goal helps me to be more consistent. I've watched people on IG or in my running groups do running streaks and right now I can't do that. But this little goal of mine, a moving streak? It changed my thought processes and got me more dedicated to always making sure I take care of what my body needs.

I also learned that I have a LONG way to go as far as strength goes. Mostly this is because strength training is so boring to me. After I finish a run or a hike, my heart is lifted, my spirit is lighter. During a run or a hike I feel that happening. During a weight training session I'm just…bored.

But I know I need it. Especially as I've done more over the past months, I can see where I am weak. I definitely have some asymmetry going on, my lazy glutes are still lazy (I have been known to actually TALK to my glutes on a long uphill hike to get them to do something other than go along for the ride), it's hard for me to work my quads.

Clearly I'm OK with getting my cardio in. I think, knock on wood and barring any injuries, I will continue to be more consistent with cardio. So for my next streak—now that I've streaked once, I want to keep doing it—I am going to concentrate on muscle work. I will still run and hike (and hopefully do more High Fitness classes, maybe just once every other week for my knees' sake), but my goal for today until the winter solstice is to do some strength work EVERY DAY.

It's a strength streak!

Some ways I am going to accomplish this goal:

Also, just going to include this other goal: I am searching for a half marathon to do near the end of October or beginning of November. I haven't really pushed myself to up my miles, and I think a race would help with that. Seriously considering the Moab Trail half marathon and I can't tell if the little thrill of fear I feel at that is because I'm actually afraid or if it's just excitement at a new challenge.

Did you streak with me? How did it go? And if not, what are your upcoming fitness or health goals?

Posted at 09:01 AM in Hiking, Running, Solstice to Equinox Streak | Permalink | Comments (3)

I did streak with you, or in tandem with you. I made a goal to make my step goal (8500 steps, btw) every day of the "summer" (once the kids were out of school.) I missed 3 days - one while we were traveling home from Hawaii, and two other randoms. But I made it all the other days. There were many, many nights of taking Willow for an extra walk around the block to get my steps in. But it was wonderful, and I've grown to really love walking.

I say AMEN on the strenght training. I suggest an interval timer - I have one on my watch. I improv doing some stuff (pushups, abs, planks, whatever) for 30 seconds then a little break of 10 seconds. It's only 10-13 minutes, but doing it time-based rather than rep based makes me love it. And it's fun to figure out the next move on the fly.

There's an antigravity yoga class I really want to try. Maybe you should join me!

I did the streak, and I'm calling it successful although I didn't get to walk or hike every day. Life got in the way with a death in the family and a few other things, but I was active most days and I am happy with that. Thanks for the motivation, Amy. Having a goal helped so much, as did following along with other ladies who took on the challenge. I may just try the strength training, too. Something I am sadly lacking in these last few years.

Are you going to go back to barre classes? They WERE fun!! It doesn't fit for me right now, or I'd do it with you.