Book Review: Thirteen Doorways, Wolves Behind them All by Laura Ruby

Once I’d confessed to my own mother that I thought God was a woman, because who but a woman would care so much about the oceans and the plants and the animals, who but a woman could build a whole world in seven days? (Pearl)
❦ ❦ ❦

Nothing is funny about war. But one must find reasons to laugh anyway, especially when nothing is funny. Sometimes joy is the only defense you have, and your only weapon. (Sister Bert)
❦ ❦ ❦

Hell wasn’t fire and brimstone. Hell didn’t burn. And the only devils to be found were the ones you find on earth…Hell was empty. Hell was nowhere. A dead silent plain of echoes and dust and empty arms rocking. Where people didn’t even care enough about you to hate you. Where the people who’d promised to love you forgot your name. (Frankie)
❦ ❦ ❦

If you can’t be happy, just live as much as you can. Be like Francie in A Tree Grows in Brooklyn, be something every minute of every day, be sad, be cold, be warm, be hungry, be full, be ragged or well dressed, be truthful, be a liar and a sinner, only be something every blessed minute. Make art, make the most beautiful art…and when you sleep, dream all the time so that not one little piece of living is lost. (Loretta)
❦ ❦ ❦

It isn’t often that I read a book, finish it, and realize: I wouldn’t change one thing about this. I loved the whole thing. But when I finished Thirteen Doorways, Wolves Behind them All by Laura Ruby that is exactly how I felt.* 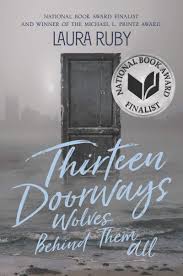 This historical YA novel tells the story of Frankie, her brother Vito and her sister Toni. They live in an orphanage in Chicago near the end of the 1930s, not because they are orphans—their mother is dead, but their father is still alive, repairing shoes at the shoe shop he owns—but because he can’t afford to feed them. I didn’t know this happened after the Depression and before World War II, people abandoning their children to the orphanages because then at least they were fed, which is the first thing I love about this book: it taught me a piece of history I didn’t know. Frankie’s father is dating a new woman, Ada, and one visiting Sunday—the day that the parents can come see their children in the orphanage if they want, the day that Frankie’s dad brings her meatball sandwiches and buttered spaghetti—he announces that they are moving to Denver. “They” meaning him, Ada, her children (who were also in the orphanage), and Vito.

But not Frankie or Toni.

It also tells the story of Pearl, who was a young girl during World War I, living in a big house on Lake Michigan. She is the narrator of the story, and also: she is a ghost. When the novel opens she keeping track of Frankie; she likes to see the babies in the nursery at the orphanage, as well as all the other stages the girls are in, but she is especially interested in what Frankie is doing. As the story progresses, she learns more about her nature as a ghost through her interactions with other ghosts, and a huge arc of the story is her figuring out what really happened to her.

I loved so many things about this: the structure, the inclusion of the ghosts’ stories (which help the book give more illustrations of what girls’ and young women’s lives were like during those times), the writing style. No, really: the writing style. I had this same response with the other book I’ve read by this author, Bone Gap. Her writing isn’t transparent—you notice the style, in other words, which I know not everyone loves—but it isn’t so highly stylized that it gets in the way. (AKA, John Green’s novels; I also love his books but sometimes they are too stylized.) Then there’s the Italian food, the angel in the orphanage courtyard, the grittiness and the way it contrasts with the moments of happiness Frankie finds. The romance—just wait until you get to their first kiss! The way the war is a part of the story but it isn’t really a World War II novel.

What made my loving of it most complete is the afterword, where Laura Ruby writes about this story being based on her mother-in-law’s life. The way she had to work with her mother-in-law’s reticence to get the story, and the bringing to life of her family history: sniff. But also it is that it’s her mother-in-law’s story, not her mom’s. She doesn’t have a genetic connection to the women, but she still loves her and finds her story fascinating. (That this has meaning to me is a hint about Dumb Things Amy Worries About; high on that list is “if my sons decide to get married, will my daughters-in-law want to have a relationship with me?”)

Definitely read the afterword! And if you read this one, let me know. I’m curious to know if others love it as much as I did!

It was only as I wrote this that I realized there was one thing I wished was different. Very close to the end you discover that Frankie’s mom is not dead, but has been living in an asylum all of these years. I think this fits well with one of the novel’s themes—all of the different sorts of damage that men and society do to women—but there was only one scene with her mom in it. It’s sort of left hanging; does Frankie establish a relationship with her? I wanted this line to be developed a little bit more.