At my core I knew, and I’d known since I first suspected it was a possibility, that a baby was not right for me, not now. Every cell of my being rebelled against the idea. There was no question. 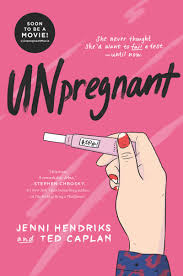 The young adult novel Unpregnant by Jenni Hendriks and Ted Caplan tells the story of Veronica, who discovers she’s pregnant when her ex-best-friend, Bailey, walks in on her taking the test in the high school bathroom. Veronica, pretty and blond and popular enough doesn’t tell the group of three friends she loves being the Queen Bee of (but not really in mean ways, just slightly superior); she might just become the class valedictorian and has her college scholarship all tied up. Girls like her don’t end up unexpectedly pregnant in high school. Especially purity-ring-wearing girls with conservative, pro-choice, religious parents. So even before she discovers that her boyfriend Kevin poked holes in the condom (because he didn’t want her to go away to college while he stayed in their Missouri town), she decides she will get an abortion.

But then she discovers that in Missouri, you have to have your parents’ permission to have an abortion, and this is something her parents would never consent to. The closest state where she can get an abortion in secret is New Mexico; Albuquerque is almost 1,000 miles away but is her closest option. After telling her parents that she’s going on a weekend study trip with her friends, and telling her friends she’s going to have a romantic weekend with Kevin, she heads off on a road trip—with Bailey.

Honestly, this will be a hard book for me to review. Partly because it is billed as “that funny book about abortion.” I do think the authors pull off the humor, except for me none of it was funny. This isn’t because they didn’t write it well, but because almost everything that is supposed to be funny never feels funny to me. Slapstick and coincidental humor especially, and there is a lot of that in this story. So, for me, one of the major points of the story just didn’t resonate, but again: this is because I’m just not the audience for this kind of humor.

That said, I liked many things about it. While “making up with my ex-best-friend who I abandoned because I was cooler than her in high school” is a common YA trope, I enjoyed the process of Bailey and Veronica mending their relationship. It wasn’t simple and it required both of them to change. I also enjoyed watching Veronica process her choices and realize some hard truths about herself. And I loved Veronica realizing how damaging her relationship with Kevin was. Finally, it makes a pretty strong case against individual states’ rights about abortion. No one should have to travel that far for a medical procedure. (And, yes, I would be devastated if my daughter didn’t trust me enough to seek out my help if she were in Veronica’s position, but in the end I firmly believe that once you are pregnant, the choice of what to do is yours, not your parents’ or anyone else’s, because you, as the pregnant person, have to live with whatever choice you make. Ideally all teenagers would have fantastic, open, trusting relationships with their parents but how many ideal situations involving teenagers and parents do YOU know?)

That said, I had one huge problem with this book. Veronica has been raised in a strict Christian family. She’s gone to a church that made pro-life signs to wave around at abortion clinics and she made that purity vow. Yet, when she finds out she’s pregnant, her first choice, without any real hesitation, is to get an abortion. After the long road trip and when she is at the abortion clinic, she does move through some deeper emotions about her choice before she decides to go ahead with it. But for me, I couldn’t get past her never hesitating at the very beginning. I mean, clearly if she’s been having sex with her boyfriend, she has moved away from her parents’ teachings and beliefs. But it just didn’t feel authentic that she went to abortion so quickly and surely. I think that someone who was raised in that way would have to work through a process of coming to that decision because while sure, people absolutely change and have their own beliefs that are separate from their parents’, we are still all products of the environment we grow up in. The lack of any really processing was my biggest hang up with this book.

Again, maybe that is because of what I bring to the book. I don’t believe that anyone makes the decision to have an abortion lightly. I think that when you are a pregnant teenager especially, it is an enormous choice. And portraying the choice in such a lackadaisical way, and then tossing in a bunch of slapstick humor, evangelical strippers, cow tipping and raucous hijinks…to me, it felt like it just made light of the whole situation.

Except it redeemed itself a little bit in the end, when things get real and far less silly.

So…mixed feelings on this book for me. I appreciate novels about teenage pregnancy, rape (poking holes in the condom is assault), and abortion because they have brought the discussion out into the light. There is far less shame and stigma associated with these things now than when I was a teenager, which I see as a positive. I enjoyed many things about the plot. But in the end, I think that it is a larger topic than the humor and lightheartedness this novel gives it.

But of course, you wouldn’t be the first person to accuse me of being a humorless stick in the mud, so take my opinion for what it’s worth.