I’ve wanted to run a race on Thanksgiving for a long time, but it’s never felt like I could do it. Not the race itself, but working it in with the busyness of Thanksgiving morning, especially the past few years when I’ve made the whole meal on my own.

This year, though, since we were going out to eat, I decided to run the Thankful 13 race in Lehi, Utah. I’ve wanted to do it for a long time, partly because I ran another race done by the same company a few years ago and I LOVE the shirt from that race. (It was a Halloween race so I can really only wear it in September and October without looking weird, but it’s perfect: exactly the right fit and thumb holes!) They added a 10k option this year, which is perfect for me right now, as I’ve been concentrating on building my base and consistency (and improving my form and cadence) over adding mileage. Plus it took us awhile to decide for certain what we were doing for Thanksgiving, so I didn’t have enough time to train properly for a half.

My friend Wendy was going to walk the 10k with another friend coming from Salt Lake, so we drove together. I almost never go to races with a friend so this was so nice for me. We were a little worried about the forecasted snow but it was just barely starting to swirl when we got to the parking lot, so I left the hat I’d brought and the warmer gloves in her car. 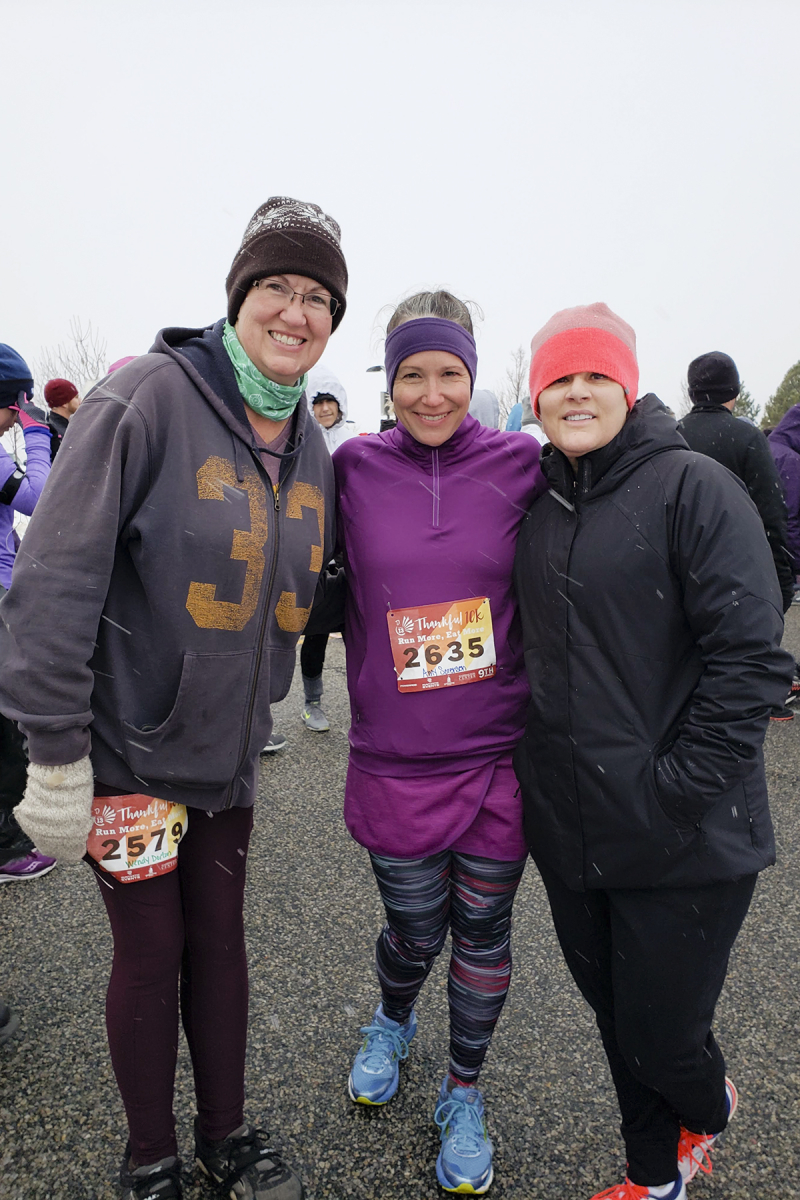 One way to judge a race: are there enough porta potties at the start? There were roughly 50 and no bathroom line so I took that as a good sign! Wendy and I timed it pretty well, so we just parked, walked over to the bathroom, met up with her friend for a picture, and then they were calling for the 10k racers to gather at the starting line.

The race started right on time (another indication of a well-run race). It had started snowing for real—not thick snow, but a consistent flutter fall of pretty white flakes. The bridges we had to cross were pretty slippery, and then the course went onto the Thanksgiving Point golf course. The path there is stamped concrete and holy cow it was slippery. As a fall is one of my biggest fears whenever I go running, I ran as much of this part on the snowy grass instead of the paved path as I could. 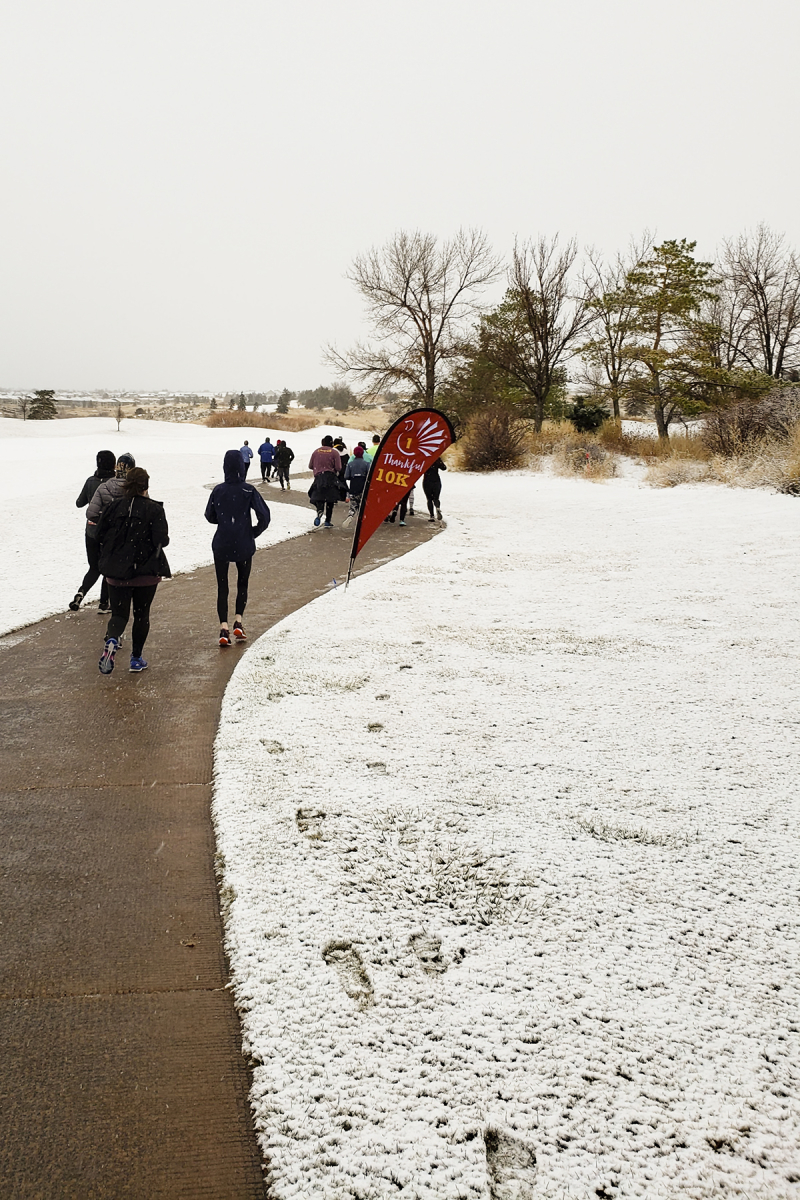 After the golf course, there is an out-and-back section on the Jordan River pathway. I’ve run this path a lot of times (I used to go and run there while Kendell was taking tests at the MATC building when he was working on his degree) and I thought about several memories I have at that section. Most strong is the day Becky called me because she was having an anxiety attack on the freeway and I stopped running to talk to her until she was OK. That feeling is that spot of the trail, which is a weird thing I can’t entirely explain.

On the –back part I passed Wendy going the other way and it was fun to wave! A little bit later, the trail merged with the 5k runners and HOLY COW. I did not like this. It was annoying to be in the middle of a 10k and all of a sudden feel like you were in the first mile, dodging and swerving in a crowd of other runners. Plus there were a lot of kids and they don’t really know race etiquette (like, don’t stop in the middle of the path to wait for your friend) and they were dropping stuff and everyone was forming clumps of people who were hard to get around. I had to remind myself at this point that everyone was there to have fun and it wasn’t like I was going to win, so if I had to slow down a bit it would be OK.

I was still glad when the 5k peeled off though. 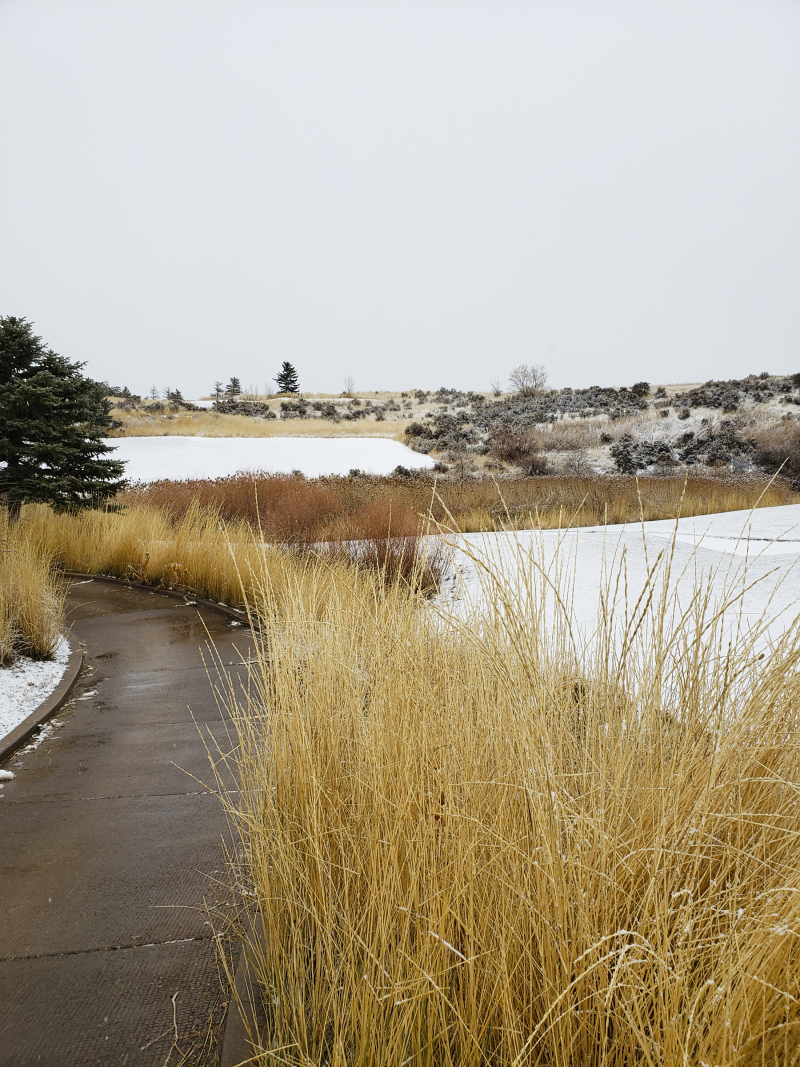 (This was a tiny loop off the main trail just before the 5k and 10k merged. Literally not one person around me, swoon. But only for, like, 30 seconds.)

I am still doing walking breaks. (I think that with my knee condition I will probably always do walking breaks now. Part of me feels some sort of embarrassment about this. Part of me doesn’t care because as long as I can keep running I’m good.) When I stopped at about 4.5 miles, the woman who was about 15 feet in front of me also stopped to walk. Then I heard a man behind me who said “don’t stop sweetie! You’re doing great, you’ve got this!” and I said “Oh, thanks! I’ll start running again in two minutes!” and then the man who said that passed me and I realized it was the other woman’s husband and he was talking to her.

HA! I giggled for a bit about this! 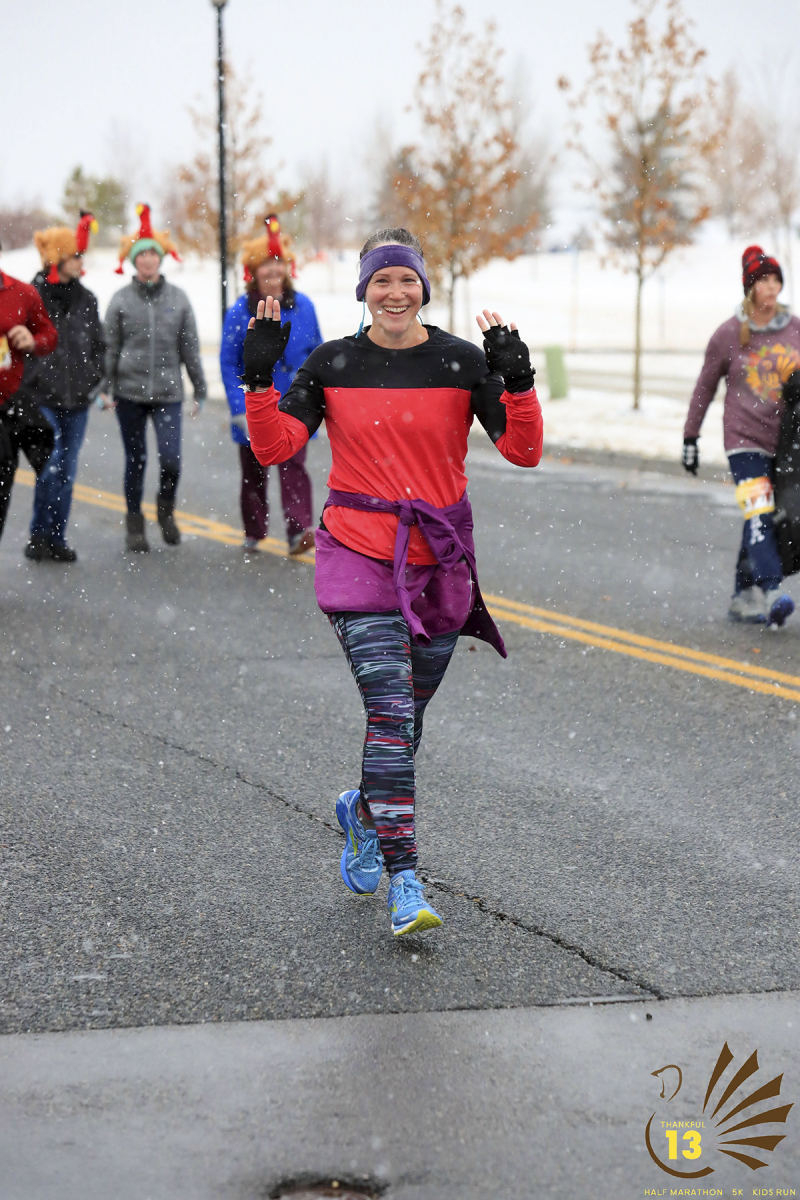 Another nice thing about this race: you can download the race photos for FREE if you just want social media sized files, and for $1.99 for printable sizes. It's pretty rare I actually get a good race photo anyway (I'm still sad about the race photos from my last marathon), but it irks me to have to drop another $50 for the race photos. Not that I don't value photographers, I know their work is difficult, but I think the RACE should pay them. Two bucks is reasonable! I'd even go up to ten! Anyway, the first photo spot was in the mixed-with-5k-mess and I was behind a big group, but for this last one no one was really around me AND I spotted the photographer with enough time to wave!

I texted Kendell so he would know I was getting close and started running again. And I had to laugh at my body at that point. The longest training run I’d done was about four and a half miles, so when I started running again at 4.5 miles, I swear my legs complained. They resisted moving again. They were like…ummmm, what are we doing? It’s stopping time! But I persevered and finished. Kendell was at the finish line and I have to say: I’m always so glad to see him there. Not just because he takes some awesome photos but because it is so good to see a friendly, supportive face in the crowd. He thought I was wearing something different so he didn’t recognize me at first; I finally caught his eye by waving at him. 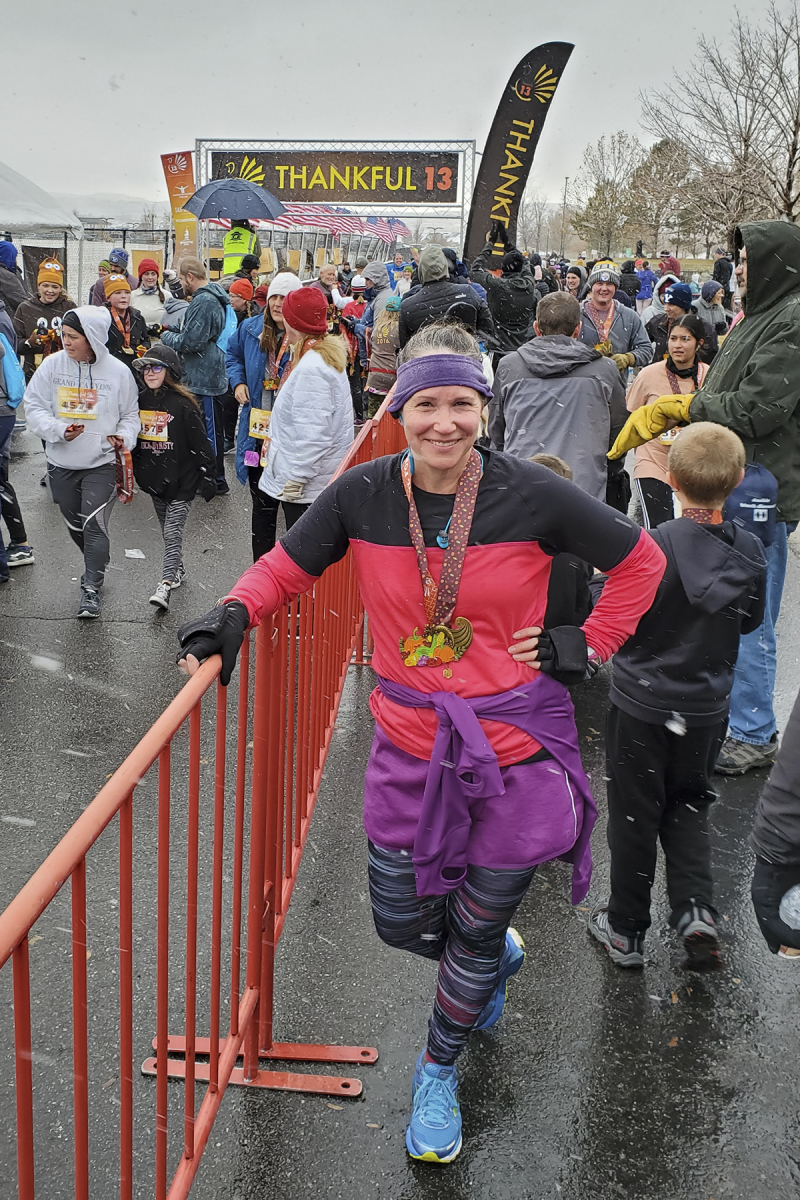 The snow fell the whole time I was running but it never got so thick that it felt dangerous. I started regretting my second layer about five minutes in to the race but left it on until about two miles in. (I really hate running with something tied around my waist.) Since there was just snow but no wind, it was just perfect running conditions. I’m glad I ran it, but I do have one complaint: the shirt! I got a large because that’s the size of my Halloween race shirt I love…and it is way too small. Still has thumb holes but it’s way too tight on my chest (which is hilarious if you know me!), so maybe I’ll have to try it again next year.

Oh how I would love to walk a 10km (or even a half) when you were doing the same event. When you come to NZ we'll have to find one to do together! I know I said it on your Insta post, but I think these photos are SO good. Love how happy you look!

It was wonderful to go together!