Book Review: After the Flood by Kassandra Montag

I felt a resistance in my bones. A knowledge that some choices are places and some places are where you cannot live. I had to go where I could live. I had to finish what I started and to keep stretching toward a future I had no right to believe in. 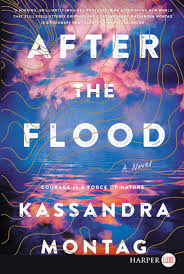 After the Flood by Kassandra Montag is a post-apocalyptic novel. It takes place about 100 years into the future, when the environment has degraded so much that the oceans have overtaken the earth, and the only land still above water are the higher elevations, places that used to be mountaintops that are now crowded with people. Myra and her daughter Pearl are lucky because they have a boat, which Myra’s grandfather built before he passed away. He also taught her how to fish, so she is able to provide for herself and Pearl. They live a fairly isolated existence, spending weeks at sea and only coming in to port to trade fish for supplies. When Myra discovers that her other daughter, Row, might still be alive, however, her circumstances start to change. Row was taken when Myra was pregnant with Pearl, by her father, back when the water was still rising but people could still mostly live on land, and Myra has never stopped missing her.

This knowledge gives Myra a reason to start seeking out connections with people who might be able to help her. She is fairly certain that Row is living in a settlement called The Valley, which is in Greenland, and as everything else east of the Rockies is underwater, this is far more sailing that her small boat could manage. She will need a larger boat, people to help her, a large stock of supplies. And there’s the problem that The Valley is controlled by a group of raiders called The Last Abbotts, who are fond of snatching teenage girls for their breeding ships. She cannot do this on her own.

The story winds out from Myra’s need for a solution to her problem, and as the tries to figure it out, we readers go along with her in the brutal world she lives in. I know you’re likely thinking of the movie Water World, and there is a hint of that, but it’s less campy. The world building makes the bleakness of the ruined world feel viscerally real and miserable, and yet, in a sense, it is a novel about the relationship between a mother and her daughter that just happens to be set after an apocalypse.

Since this genre is one of my favorites, I enjoyed a lot about this book. However, in the middle section it got bogged down by doing something that many other post-apocalyptic stories do: exploring human nature with a sort of certainty that a vast majority of the population would become manipulative, lying, violent people. This leads to Myra being able to trust no one, because she isn’t sure who is really reliable, while at the same time putting people (including Pearl) at risk because of her distrust. (The Walking Dead TV show does this ad nauseam and it frustrates me; maybe I’m thinking too highly of people but I think the majority would remain ethical.) It’s not so much that Myra is an unreliable narrator, but that in her mind she is doing the good, right thing while not trusting that anyone else is good or right, but she is actually harming them. (And thus neither good nor right.) She nearly becomes malicious. I was *this close* to not finishing the book because of this section. I told myself I would read for half an hour more, and if I were still frustrated I could move on.

She finally redeemed herself, though, so I continued.

I galloped through the last half, in fact. There are some unlikely plot devices that annoyed me a little (I don’t want to give any spoilers) and some things that felt predictable, but overall I am glad I stuck with it and finished this one, mostly for how Myra changes. At the end she realizes that “you must become someone you hadn’t had to be yet.” I think this resonated with me because it is a change I am trying to make in my life. Letting myself change to become who I need to be but haven’t become yet. Actually, it’s not really “letting,” it is pushing for that change. Trying to make it happen, to knock down the things that have been holding me back. Like Myra’s journey, this is long and difficult and it requires me to find and make connections I can’t even imagine at this point.

Did After the Flood change my life? No. But it gave me a little bit more courage, and that is much needed so I will take it.