Home Archives Profile Subscribe
Dear America: An Open Letter to All the Voters
A Compulsion Compels Me Toward It: Thoughts on Dreams

Book Review: The Kingdom of Little Wounds by Susann Cokal

If you are pure of heart, a priest’s absolution means nothing, and neither does general opinion. If you know your heart is good and guiltless, you can grant yourself absolution. I believe the Virgin would say it so. If you fear the father, she has always said, turn to the mother. 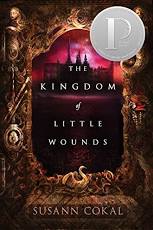 I discovered the book The Kingdom of Little Wounds by Susann Cokal while looking at upcoming new releases. She has a new novel, Mermaid Moon, but the reference to her previous book—“A fairy tale about syphilis”—grabbed my attention. I mean…if that’s not a perfectly Amy book I don’t know what is.

Set in 16th century Scandinavia, the story follows Ava, who is sent to court as a seamstress to the queen after having some misadventures with a Protestant. It is also the story of Midi Sorti, an African slave with a mangled tongue; she can’t talk but can write, thanks to the teachings of Arthur Grammatics, the court historian. We also follow the trials of Queen Isabel, whose children are all ill; the disease is mysterious, an affliction from the Lunedine family line. (Really it is congenital syphilis.)

I’m not going to lie: This is a dark, dark story. It is a young adult novel—a Printz Honor—but I would recommend it only to older teens. It is dark in the sense of Game of Thrones darkness, a comparison I hesitate to make (because it is not exactly true) but can’t avoid, as one of the characters, the scheming Nicholas Bullen, is very similar to Littlefinger. There is rape and Nicholas’s collection of “angels,” women who he has power over in some way or other and who he uses as spies in his quest for power. And the very awful dreadfulness of life at the beginning of the Renaissance comes into full color, the superstition and the magical thinking, the unrelenting power that kings held to do whatever they wanted, the misunderstanding of the world, disease, the universe. And of course, misogyny.

And, despite that initial blurb, I don’t really feel like this is a fairy tale. I suppose it has elements of fairy tales—the endangered princesses, the castle like a dragon, the royalty in beautiful dresses. A few mentions of mermaids and trolls under bridges, but there are no real interactions with fairytale folks or beings. The fairy-tale feel comes in through Ava’s stories, which are fairy tales, and the beliefs the people hold as truths; the only magic is in how they think. Instead, this reads like historical fiction.

One of my favorite tropes was Ava’s connection with fairy tales. She tells them to the other seamstresses, and then, when she is demoted, she tells them to the princesses. But she also sees the world, in one sense, as a fairy tale, which helps her to cope with the difficult things she experiences. When she is able to turn, for example, her abuse at Nicolas’s hands into a story, it is less traumatizing. “I still hunger for the beautiful part of the story,” she realizes, even when she is in the ugly and dirty parts, “the part with the wedding or the wealth or the lover un-beasted, the family restored, before the trials and sadness that follow into another story..I still, even now, I still think I might earn these things, if I complete a few more trials correctly.”

While I don’t think this book is for everyone, I loved it. I did take a long time to finish it, because of that darkness. I am definitely not a reader of light and fluffy, but I also can’t tolerate dark and twisty for as long as I used to. So I dipped in and out. It took me three weeks to finish this, but I am glad I invested the time to be immersed in such a world—and to be able to resurface in my world, with antibiotics instead of mercury.