50 Hikes Project: Thoughts on an Album

Last year, Kendell and I did 50 hikes together. I didn’t blog about them much because in my head I have the spark of a book idea that is growing out of those hikes, the changes they inspired, and the reasons behind them. So I have notes in my hiking notebook and scattered throughout my journal but nothing in a central place.

In December, I had the idea that it would be great to put together a photo album with pictures from our hikes, to give Kendell for Christmas. (I would have to add the last hike after Christmas, because we took it on December 30.) I wanted this to be a simple album, mostly just photos and journaling with a few embellishments. I ordered a 6x8 photo album and some two-up photo holders (so two 4x6 photos per side). I started going through photos on my phone and, wow. I was swiftly overwhelmed. Of course I can’t print every photo I took from 50 hikes (at least, not if I wanted to fit them all in to one album), so I tried to narrow it down to 2-3 per hike. 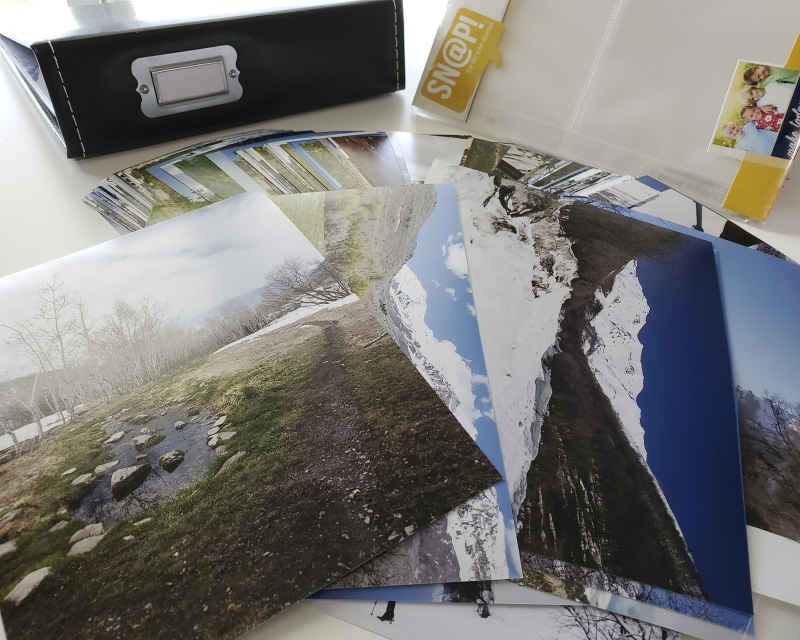 I'm using this Simple Stories black leather album and their Snap photo pages. Mostly 4x6 but some 6x8 photos too.

And then I bumped into the problem of photo orientation. Right now I am just using my cell phone for photos when I hike (I really want to change that and find a good small camera, as I’m getting more and more frustrated by the cell phone limitations, no matter how much they’ve improved), and think about it: how do you usually hold your cell phone when you take a pic? Vertically. But how are most pocket pages oriented? Horizontally. I know it shouldn’t matter and I can put a vertical in one pocket and a horizontal in the next one and it’s not a huge deal, the photos are still visible.

It still bugs me. 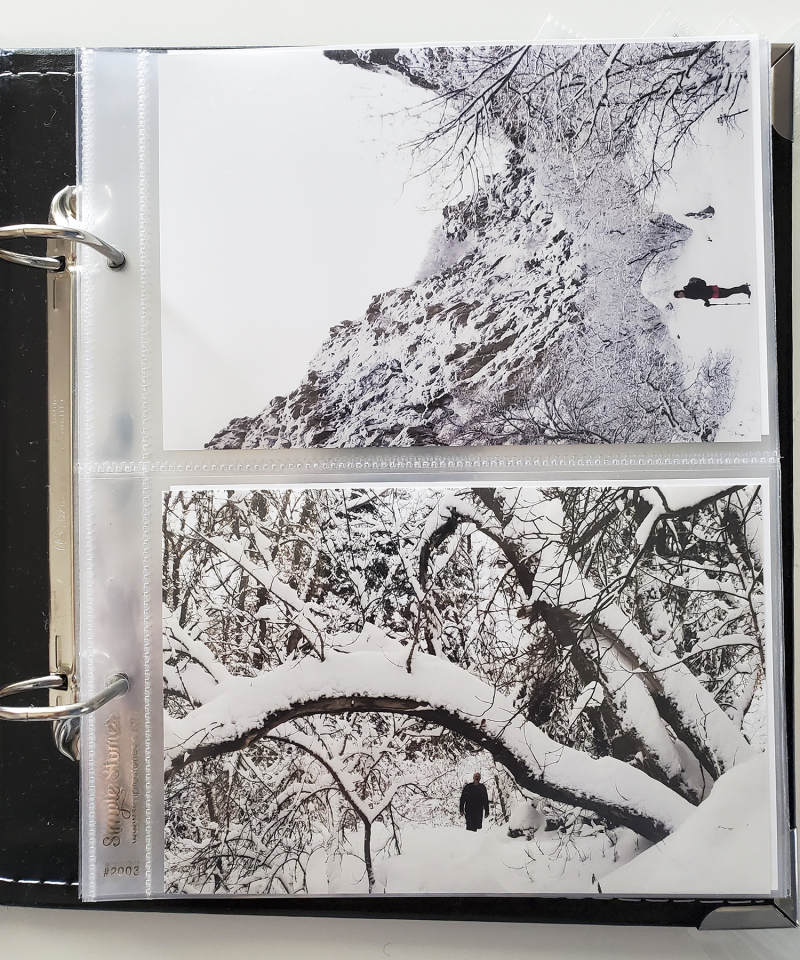 One vertical photo, one horizontal. This makes me crazy.

And then I started trying to figure out how to include some journaling. This varied widely depending on the hike. Some hikes were epic, like the 14 miler we did when we ran out of water at the half-way mark, got stung by yellow jackets, stumbled upon a big, angry rattlesnake, and got lost when we took a wrong turn. Some hikes were just…lovely rambles, but no big stories. In my head, I pictured small journaling blocks that I would stick on top of one of the photos from each hike, with the name of the trail, the distance and vert, and a few details. But as the “few details” are so different for each hike, some of the small journaling blocks are not really very small.
And then I also got hung up on how to orientate the journaling. If I had, say, four vertical photos for a hike, all together in the sheet protectors like this: 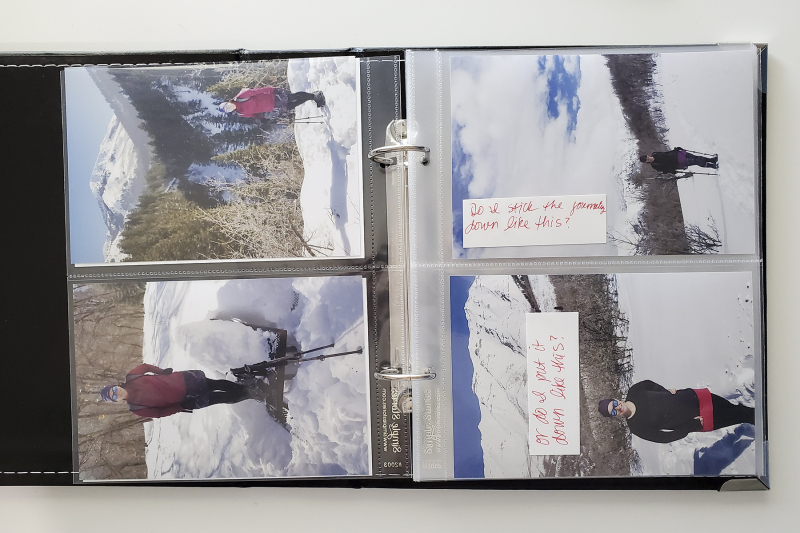 This is the album lying open on my desk, with four vertical 4x6 photos. You have to turn the album one quarter turn to see the pictures properly. Which way would you put the journaling?

Eventually, I got all the photos printed. I printed some as 6x8 and more as 4x6. I tried to find as many horizontal photos as I could. I gathered all the story details. 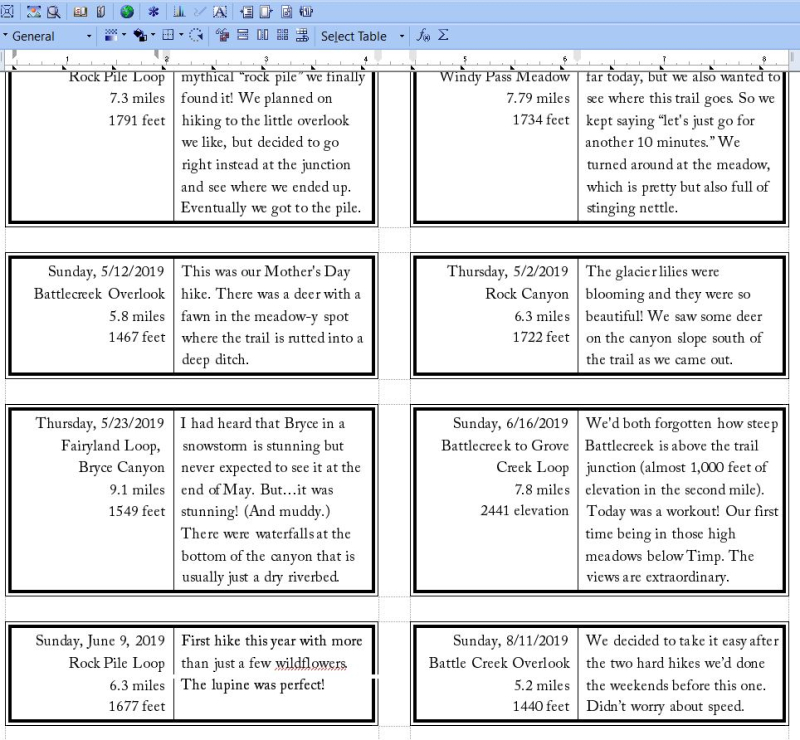 See....these are the journaling boxes. No consistency to the size because the stories are all different lengths. I will put a stamped image in the empty space under the hike details.

Did I finish it and give it to Kendell for Christmas?

Did I finish it and give it to him for our anniversary in February.

I’m just frustrated by the whole thing. I wanted it to be simple but it’s gotten more and more complicated and I have a TON of photos (250+ so I have options to choose from) and all the sheet protectors but I don’t know how to proceed.

Actually, here’s what I want to have happen. I would like some scrapbooking company to make an 8x8 album that has two types of pocket protectors for the photos. One that holds two vertical 4x6 (which would be 8x6, yes, which is entirely different than 6x8) photos and one that holds two horizontal 4x6 photos. The holes on the protectors would line up so they all fit nicely into the album. Yes, the pages themselves would be a different size, but you could just flip the pages without having to turn the album to see the photos correctly.

One day I will put on my big girl pants and put the album together…but I already know I won’t love it.

At any rate, that is a very long introduction for what I really wanted to write about today (which I will blog about tomorrow), and that is that I have set myself a new goal. This year, who knows how many hikes we will take. We’ve had a slow start because of muddy trails and so only did one hike in each January and February and two in March. I don’t know if we’ll make it to 50 again. But I DO know I want to document it in an easier and less frustrating way. For one, I am paying attention now and trying to take horizontal photos on EVERY hike. I am researching a new, small camera I can take hiking with us. And I’m going to blog about every hike we take. These blog posts will include photos, and then I will just save them so I can print them at the end of the year, but I won’t have to spend 57 bajillion hours processing them all at once. The stories will all be in one place (in my 2020 hikes category). And maybe by then my dream album will have been invented and produced. Or maybe I'll figure out some different approach, I don't know. I'm open to suggestions!

Tomorrow I will start posting about our first hikes of 2020.

I hear your frustration! Thats why pocket pages take me longer than they should. Sometimes I enlarge a vertical so it will fit into a 4 x 6 horizontal. Sometimes I cut down or buy single 3 x 4 pockets to clip in front of the 4x6 text. Very occasionally, I will stick a vertical onto cardstock to make it the right size and journal on that spare card stock. But it is ANNOYING! I do try to take a vertical and a horizontal each time I use my phone as a way round this. The recipient probably won't really take as much notice as the creator of the album so I encourage you to keep going.