Back in January or February, the literary world was kind of buzzing about a book called American Dirt. It tells a story about a woman and her son who, after their husband and father is executed by a drug dealer, flee to America as immigrants. The controversy over the book is that it is written by a white woman, a first-time author who received a HUGE advance and tons of publicity. Now, don’t get me wrong, I am all for new writers receiving attention. And there are entire books written about the skill of writing from a perspective other than your own; men write female characters all the time, women write male characters, writers of all genders write from all sorts of perspectives. But writing through the lens of a different race is, I believe, more difficult, and also riskier. Before the controversy, the book sounded mildly interesting to me—I even put it on one of my lists of “books I’m anticipating” on my Instagram—but as I read both sides of the issue, I leaned more and more towards not reading it. What pushed me ultimately to “nope” was the fact that at the book-release party, the tables were decorated with barbed wire.

I belong to a couple of book-themed Facebook groups, and in one in particular, this book came up many times as one people loved. There would usually be one or two dissenting voices, but mostly people enjoyed it. I wrote a very brief response on one of them, trying not to sound judgmental. As one of the things I have learned as a librarian is that there are books for every reader, and there shouldn’t be any shame in reading what you love, my intent wasn’t to criticize or belittle, but just to raise a few points to consider. The original poster got right back with me, letting me know that she thinks it’s a waste of time to spend so much emotional energy thinking about why you read a book, or why you like it. “Books are for entertainment,” she wrote. (I resisted writing back about the oddness of being “entertained” by immigrants struggling through miles of desert, being threatened by rapists and trying not to die.)

That is true for some readers, and that is fine. For me, though, the point of reading isn’t only to be entertained. I am passionate about books—even, like American Dirt, books I don’t read—because I want them to spark ideas, thoughts, and knowledge within me. I read so I can experience things I cannot otherwise, and so I can learn something from those experiences, not only be entertained by them. So, yes: I do spend emotional energy thinking about the books I read. 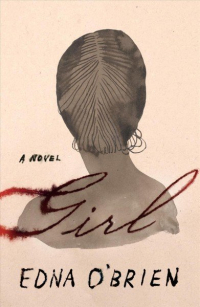 All of which is a very long introduction for the book I really want to write about, Girl by Edna O’Brien. It is nothing like American Dirt; it is a literary novel about a girl who was kidnapped by Boko Haram, written by an established Irish author who has written novels, essays, plays, poetry, and short stories, who Phillip Roth described as “the most gifted woman now writing in English.”

But Girl is, in a way, like American Dirt, in that it is a white woman taking the lens of a brown woman in order to tell her story.

Who gets to tell stories?

I noticed this during the same time as the A. D. controversy, via a review by Ann Beattie. “This is Auden’s Icarus story, though it happens at eye level, right on planet Earth, while everyone’s looking.” Any book that evokes one of my favorite poems is likely a book I will love. But the timing made me think: OK, if I struggle with an American woman writing about the Mexican immigrant experience, can I trust an Irish woman writing about the African experience?

So I confess: I read the acknowledgement at the back of the book before reading the story. It let me know that the author did a huge amount of research, talking to the girls themselves who were kidnapped. I didn’t get a sense of her wanting to sensationalize the experience, but to provide a platform for those girl’s voices. I also felt like I had to trust her, because the awfulness of the experience could become overwhelming. The acknowledgement and this interview on NPR helped me to trust O’Brien’s motivations: not exploiting someone else’s tragedy, but putting their experiences out in the world so we could also carry them.

Girl is narrated by a young Nigerian girl who is kidnapped from her school by Boko Haram. In their camp, she suffers many atrocities. I had to read this section in small sips rather than fast gulps. Nothing is described in excruciating detail, but as a woman reader I could imagine without the details. More, I read it slowly because it felt like a way of honoring those sufferers of atrocities; breezing through would’ve made it mean less. She ends up being given as a wife to one of the soldiers, who is not awful to her. She has a baby with her husband and, when a military strike occurs one night, she escapes (with the help of her husband) with her baby and another girl.

The stories of her experience in the camp are only the first third of the book. The rest of the story is about her survival: her long trek through the jungle and, perhaps most traumatic, her return to her home and society. Some people fear her: “to them I am not a girl, I am not even a person, I am the portent of death, I am a decoy, sent to create a distraction before an attack.” Some can’t seem to see her, as if looking past her existence takes away the fact of her experiences. Her mother and aunt can’t seem to see her as anything other than a “bush wife”; she isn’t seen as a victim so much as a now-defective person.

In essence, this is not only a story about the narrator’s difficult experiences, but how they change her. How she learns to love and trust again, and what in this desolate world can bring her beauty and peace.

This was not an easy book, and it is not for everyone. But it was so well-written and moving, I am grateful I read it. The narrator will stay with me for many years.