Examining my Own Racism

When the story about Amy Cooper was just starting to break, there was a discussion about it in one of the Facebook groups I participate in. Someone tried to excuse her behavior by saying that she, as a woman alone in Central Park, must have felt threatened, and only reacted like she did because she was afraid in the heat of the moment. 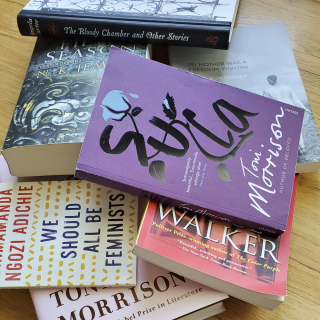 Many of us pointed out that she doesn’t act afraid but is, in fact, the one doing the threatening. As has already been pointed out, she turned her whiteness into a weapon, trying to build something painful with her knowledge of how black men are often treated by the police.

And then, of course, George Floyd was murdered by a white policeman, as if to prove the point.

Like most of our country, I am thinking about racism. I am wondering what our nation can do, how it can change—not just wondering, but trying to think of solutions. What can I do?

What can I do?

Let’s be honest: I live in a white state. I think when I graduated from high school there was one African American student. Utah is becoming more diverse, but is still 88 % white (as of the 2010 census). I was 47 years old before I could say I have a friend who is black. Not because I don’t want to be friends with black people, but because in my tiny circle, I haven’t had the opportunity. I am a middle-class white woman in a white state, with no influential relationships and without the wealth required to really have a voice in this world. How can I be a voice for change when I know so few people of color and don’t have much power?

Here’s another truth: I have taken pride in the idea that I am not a racist person. I want that to be part of my identity. I want people to know that I am not racist. I mean, look at me! I read books by Toni Morrison and Alice Walker and Tayari Jones and N. K. Jemisin, Zora Neal Hurston and Roxanne Gay and June Jordan. I have annotated my newest copy of Audre Lorde’s Sister Outsider so much it’s like flipping through a pen explosion.

Doesn’t that prove I’m not racist?

I am outraged by the way people of color are treated in America. I watch the news and read the books and try to stay informed. I don’t only grieve for what is happening, but I try to read widely so I can try to understand how difficult it is to be a Black human being in America, knowing I cannot really know because I haven’t lived it, but hoping that learning will at least help me to be more empathetic.

Does that prove I’m not racist?

I get annoyed when I see fabric lines or scrapbook supplies with illustrations of people—sketches, stylized paintings, cartoonish images—that are only white. When someone’s fragile-white friend on Facebook says something like “all lives matter” or “not all white people!” or “just because some white people kill black people doesn’t mean everyone has to riot!” I try to write a calm, thoughtful, and pointed response in the hope that maybe my words will trickle in. I try to remember that images matter, metaphor matters, the way people speak matters. Words matter, so I try to learn what they mean outside of my own context.

When we first started practicing social distancing, I had no problem veering widely around white people in the grocery store, but I felt deeply uncomfortable going the wide way around black people. I had the words in my mouth, “I’m not doing this because of your skin color! I just have two people with heart conditions so I’m being extra careful!” Words I didn’t say because I would sound like a crazy person, right? Did I need to say it? I smiled, that’s enough, right?

But I find myself thinking, over and over, of Amy Cooper in Central Park. A white, educated Democrat woman trying to use her whiteness to harm a black person. I find myself wondering: deep down, when push comes to shove, is there a part of me that is capable of using my whiteness like she did? Am I really a good person, or is there a situation I haven’t experienced yet that, in the heat of the moment, would cause me to act in racist ways?

I hope not, but honestly: I don’t really know. Maybe no one really knows until that situation happens.

What I do know, honestly, is that while I try to not be racist, while I abhor the inequality and while I want to weep (and have) at humanity’s seeming inability to love each other—while all of those things are true, I also am a white woman. Even though I came from a family that had some financial struggles, I still have benefitted from the way society is constructed. Even though as a woman I have less power than men, I still have been able to construct a life for myself, a life that includes food and a safe home and the luxury of my own trees and a bookshelf stacked fully with books and four pairs of running shoes.

I have accomplished my small, normal, everyday-life accomplishments because of work, true. No one gave me anything. Except—America did. Of course I would go to college, because that’s what people like me do. Of course I would build a house in a suburban neighborhood—it was the next step to take, so I took it. Of course I would have children without ever having to give them the “talk,” the one about how to act around police officers so you don’t get arrested or hurt.

I try not to be racist. I hope my anti-racism is deeper than whatever fear I might encounter. I believe without question that everyone should have equal opportunities.

But I know: I haven’t ever really been tested.

I know that I can believe whatever I want, but the reality between opportunities based on skin color is vast.

I know that my life has benefited because of racism.

I will likely never be a person with an amplified voice. I don’t have the power to change society.

But I have the same power that every white person in America has: to look at myself. To change myself. To continue working. To write letters to senators and make phone calls to governors. To vote—to vote in ways that benefit people other than myself. To speak up when I read racist comments on social media. To learn and to try to empathize. To put my own ego aside and to try to see the world from someone else’s perspective. To always push myself to continue learning and doing whatever I can.

What I can do is breathe. I can breathe. And I want to use my breath to help those who are being suffocated, even if my efforts are small. My voice alone is small—but many others are speaking out as well, and I am adding my voice to the chorus.

Beautifully written and well thought out. I appreciate how much effort you put into understanding yourself and the world around us.

This nonsense identity politics reminds of the "implicit bias training" that was in the news a couple of years ago. People have a short memory. In the US, it's the White Anglo-Saxon Protestants (WASPs) who've had a lot of influence. Some groups who've suffered at their hands: American Indians, blacks, Mexicans, Muslims, Catholics, Italians, Japanese, Chinese, Germans, and Irish. I don't understand this garbage social justice warrior nonsense today. There this big focus in the media on blacks, trans, and liberal women. If you don't fall into that group (e.g. if you're an Irish Catholic), the media doesn't care about you and neither do the liberals. It's incoherent and idiotic. I think it's all intentional and people are so stupid they follow whatever NPR/FOX/MSNBC/CNN/Vox, etc. tells them.