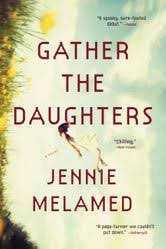 ""If she could start her life over again, she decides, she would shout more. She would bite like the dream dogs. She wouldn’t be so scared of everything all the time. She wouldn’t come when Father called, she would stay where she was. She wouldn’t lose her breath when Mr. Abraham said her name, but speak boldly. She would stomp and yell and be loud and big, eat until she grew six feet tall and then run away."

I recently read two novels about girls living within a fundamentalist Christian cult. The first one was Gather the Daughters by Jennie Melamed. In this novel, a society of people is living on an island, sheltered there after the outside world has been devastated by fire, war, and disease. In this society, men are in charge. Children are educated, but the only thing they are allowed to read is “Our Book,” which is a sort of amalgam of the Bible. Everyone is allowed to have two children, and after your children have grown up and gotten married, you drink something that kills you and your body is buried in the fields so as to fertilize the ground for future crops. When a girl begins having periods, she has reached the age where she can be married. During the summer, the children are allowed to simply run wild over the island; people leave food on their porches for them, and then they come home when it begins to get cold. The girls who have “grown up” have their summer of fruition instead, where they are all gathered at different houses in the community along with whichever adult men have been chosen for that summer. This is really the only time they are allowed a choice, as they get to pick who they will be married to.

Before the summer of fruition, fathers are expected to “lie with” their daughters. (So as to avoid getting their wives pregnant again.)

The story rotates around four girls: Vanessa, Caitlin, Amanda, and Janey. Each of them are trying to resist, in varying ways, the roles and rules their society puts on them. Janey is the most vocal; she is starving herself, existing on the barest minimum of food, so that she won’t start having periods. Amanda is newly-married and newly-pregnant; when a midwife’s ritual tells her she will be having a girl she realizes her daughter will have to experience what she did with her own father. Caitlin’s father beats her and her mother and she is trying to find her own voice to tell him to stop. And Vanessa, whose father is a wanderer (the men who both lead the community and are able to leave the island to gather supplies and, sometimes, new recruits) who sometimes brings books to the island.

Each girl’s experiences illuminate the different facets of the community. And while it was a difficult book to read, I enjoyed it quite a bit. I tend to like dark, problematic stories, and this one does a good job at using this imagined community to subtly point out issues in our current reality.

However, and THIS WAY LIE SPOILERS, the ending.

I was so infuriated by the ending.

It seems like the cool thing to do right now is to compare feminist dystopian novels to The Handmaid’s Tale. I get it—it’s a good way to market a novel. And this one is, true to form, compared in this way. I suppose there are some similarities; the scope of the communities is different, but women being controlled by a male-dominated society is a shared theme. Main characters trying to push back against the social restraints also appears in both books.

And, if you’ve read The Handmaid’s Tale, you know the ending is…well, I’ve heard people describe it as “lame,” “frustrating,” “disappointing,” “confusing.” People feel like they’re left hanging, not knowing what happened to Offred. For me, I have always thought that ending was brilliant. Partly because the van driving up isn’t the actual end, the epilogue is. The end-frame of the epilogue changes the whole arc of the story, the whole purpose. This is why I feel pretty bitter about Margaret Atwood writing the sequel. It wasn’t necessary, despite everyone clamboring to know what happened to Offred. “What happened to Offred” isn’t really the point. What happened to the country and to the women inside it is, and the epilogue gives just enough details for you to imagine for yourself. Besides, literature often has ambiguous, unsettling endings.

So, back to Gather the Daughters. Yes, like The Handmaid’s Tale it has an ambiguous ending. I felt like it ended that way to check off some imaginary list of how a feminist dystopian novel should end. To make the Handmaid’s Tale connection stronger. But they are such different books (and the author, while good, isn’t quite the stylist that Atwood is), with different purposes.

(OK, I lied: HERE is where the spoilers start!)

The book sets up a story of rebellion. Each of the four girls rebels in her own way, but Vanessa is the least rebellious. Each one is looking for her way out of the society and away from men’s control. And, one by one…each of the four rebellious daughters dies. Until we get to Vanessa, and the novel ends with her being rescued when her father is offended by the Wanderers threatening to burn his books.

All of the actions the characters took to save themselves were for naught. They pushed back and they were punished with death. Vanessa pushed back, but she didn’t save herself. Instead she was saved as a sort of collateral saving—get the books and oh! better grab Vanessa too!

I think my level of disappointment reflects my level of engagement in the book. The world-building was good, I loved the writing style, I was deeply involved in caring for the characters.

So the big fat nothingburger of the ending was a enormous disappointment. All of that setup, the rebellion of girls living on the beach together, their realizations that probably their leaders were lying to them, the sinking church…there was so much possibility for something to happen. And then it just…ended.

Like The Handmaid’s Tale, perhaps this will one day have a sequel. I hope so, but even if it does, I’m not sure I will pick it up. Trick me twice and all that…