Book Review: The Wind through the Keyhole by Stephen King (The Dark Tower series)

The Wind through the Keyhole

“It hurt, of course, but more often than not the best things do, I’ve found. You wouldn’t think it could be so, but—as the oldtimers used to say—the world’s tilted, and there’s an end to it.” 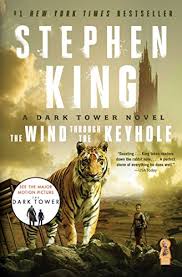 This is a companion book, of sorts, to the entire Dark Tower series. You could read it without reading any of the other books; it’d give you a taste of the world and the writing, and you wouldn't need to know everything that happened before. It was published after the last book, but I decided I wanted to read it in the timeline of the series (instead of the publication timeline). It tells of a sort of detour that Roland’s ka-tet takes after they leave the Emerald Palace at the end of Wizard and Glass. They meet an old ferryman, who tells them a few details about the land they are traveling through and, as he boats them across the river, feeds them and warns them that bad weather is coming, a starkblast. He gives them advice as to where they might weather out the storm.

Once they are (barely) safe within a stone structure of an abandoned village, no one can sleep, so Roland tells a story to them, a story about one of his adventures as a teenager, before Gilead was destroyed. Inside that story is a story Roland told one of the people he met; both of these stories touch on the same themes as the rest of the books.

This was a fast read and one I enjoyed very much. You do learn some extra details about Roland and his history, and the stories themselves are interesting. They reminded me a bit of some of the stories from My Mother She Killed Me: touching on fairy-tale tropes but finding different directions. What I enjoyed most was the underlying thread of the idea of stories, and how telling them both helps and shapes us. “A person’s never too old for stories,” Roland says. “Man and boy, girl and woman, never too old. We live for them.”

As a person who has loved reading stories of all sorts her whole life, I agree: we are never too old for stories, which fits nicely into my reading of this series, especially at this time of the world. It has been a good pandemic companion.