They say that all the stars in the sky are actually made inside the earth. Then they seek out the roots of cottonwood trees and slip into the wood, where they wait, real patient. Inside the cottonwood, they’re dull and lightless, like you see here. Then, when the great spirit of the night sky decides that more stars are needed, he shakes the branches with his wind and releases the stars. They fly up and settle in the sky, where they shine and sparkle and become the luminous creations they were always meant to be…and we’re like that too. Dreams shook loose. 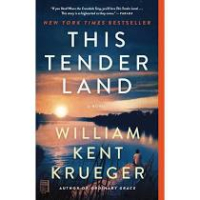 Somewhere on someone’s bookstagram account (I’m sorry I can’t remember whose!) I read a critique of the book Where the Crawdads Sing that it was “Barbara Kingsolver for the Wal-Mart crowd.” While I will heartily agree that this is pretty snarky (and confess that I haven’t even read Crawdads yet) it also made me laugh, as I had just bought This Tender Land to read on my trip to California. Since the cover blurb says “If you liked Where the Crawdads Sing you’ll love This Tender Land,” I had to just giggle a bit, and then spend a little bit of time thinking about book snobbery, Literature versus genre, and the importance of individual taste.

It’s all a scale, really, because while that particular bookstagrammer held up Barbara Kingsolver as an ideal writer of serious books, there are plenty of others who would say she writes liberal pablum. Or this especially witty critique, which claims that Kingsolver writes “a particular brand of woke, middle-aged white lady, serving up the novelistic equivalent of low-cal comfort food.” Zing! (Barbara Kingsolver is one of my favorite writers, by the way.)

My point is, everyone is a book snob in some way or another, and someone’s literary transformative novel is someone else’s literary garbage.

All of which is to say: This Tender Land was a great vacation read for me.

Picking which books I take on a trip is a vital part of trip planning for me. I don’t want something TOO complicated or difficult, but I also don’t ever enjoy reading the typical “beach read” kind of novels. (I say that without judgement…if you like them, fantastic! They are just not for me.) I want the book to be dissimilar from the place I am visiting, so no novels about Rome during my trip to Italy. (But novels about Rome before a trip to Italy would be fine!) It also has to be available in paperback.

I’m specific about what book(s) I take on a vacation because the story I’m reading becomes part of the story of the trip experience, and I want them to remain clear and separate in my mind. So, one of my favorite trip memories is lying on the beach on Kekaha Kai in Hawaii, finishing The Fifth Season and then pulling out The Obelisk Gate (both by N. K. Jemisin) and alternating between that fantasy world and looking around at the beautiful beach where my children were snorkeling. The book and the experience are intertwined, but because the story is so different from Hawaii, they are still separate.

But, you know. I make overthinking into a life skill.

ANYWAY. This Tender Land tells the story of Odie, his brother Albert, and their mute friend Mose, all orphans, who live at a school for Native Americans. Set during the 1930s, the story illustrates some of the bleakness of the Great Depression. The school where they live is pretty miserable, although they are fed, clothed, and educated; several teachers, including Mrs. Brickman, the school’s owner and superintendent, seem especially bent on breaking Odie, since he’s a kid who isn’t afraid to speak up for himself. When Odie inadvertently commits a crime while protecting himself, he, Albert, Mose, and a young girl named Emmy decide to run away. Instead of going by foot—kids who’ve run away in the past by foot have always been caught and brought back—they decide to go by river, paddling a canoe down the Gilead River to the Missouri. As they go, they figure out some of the secrets the school was keeping, encounter people who help them and some who want to hurt them, and learn a lot about themselves.

My favorite part of this story was Odie’s grappling with what he thinks God is. Albert points out that while the preacher at the Brickman School’s Sunday services talks about Jesus being a shepherd, what do shepherds do with their sheep? They eat them, one by one. Eventually Odie decides that God is a storm, an uncaring force of nature that brings destruction. Then, as he has different experiences on the river, he begins to have a more complex idea of what the truth might be. He discovers that God is in the land (“God all penned up under a roof? I don’t think so…God’s right here. In the dirt, the rain, the sky, the trees, the apples, the stars.”), the river, the bad experiences and the good ones. Mostly that God is in the people: “We are creatures of spirit…and this spirit runs through us like electricity and can be passed on to another.”

I still haven’t read Where the Crawdads Sing, so I can neither confirm nor deny the similarities. But I can say that I loved this book. It was gentle and sweet, but not cloying. The ending was a little bit too coincidental for my liking…but really, this was a great vacation book for me. When we visited Henry Cowell State Park on our trip—to wander through the redwoods—I stopped at the gift shop after, to buy a magnet (our traditional souvenir), but I also found a pretty bookmark with a watercolor painting of a redwood. When I bought it, the cashier told me that the artist who painted it, Carol L. Liddle, was sitting at the welcome table outside the shop, so I stopped to thank her for her painting. And then I read a bit, looked a bit, read a bit, looked a bit, as we drove down from the redwoods to the coast. Odie’s epic journey and my small Corona vacation are forever entwined, redwoods and fires by the river, the beach and the skeleton of a long-dead Indian child, tide pools sparkling in early-morning sun and a Hooverville north of St. Louis.

And you really can’t buy that at Wal-Mart.

PS: I am eternally grateful that I don't get carsick so I can read while roadtripping! This is from the desert on I-80. 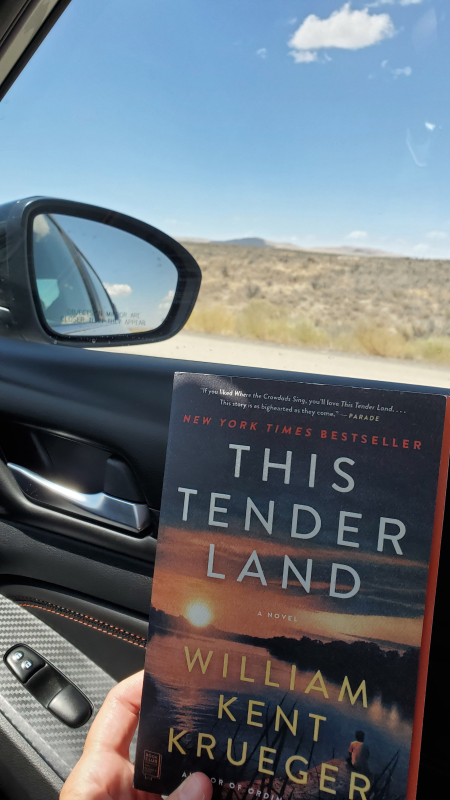