“Of course she does. This is Jemima Kincaid we’re talking about.”

“The girl who never forgets anything,” said Tyler.

…I thought, Is that what my name means? … You walk around with a hazy idea, but you don’t often get an unfiltered glimpse into the truth of how others see you, how they hear your name. Did they hear Jemima Kincaid and groan? Or did they hear it with respect? What did they think? What did I mean? 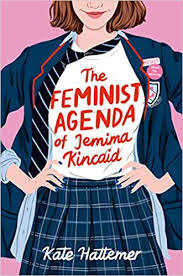 The Feminist Agenda of Jemima Kincaid, a new adult novel by Kate Hattemer, is set in a private school during the last term of senior year. The main character, Jemima, is part of the school’s Triumvirate, which is like student council only fancier (because, private school). Pretty much all of the Triumvirate’s activities so far have been kind of a bust, so Jemima—who is deeply committed to her feminist streak—comes up with an idea for prom: instead of the usual boys-as-girls promposal routine, people will be matched with the people they secretly have a crush on, using a computer program her friend designs.

This is the framework, but the story is bigger than that. It explores Jemima’s first sexual experiences (these are fairly detailed, which is why I consider this to be a new adult novel rather than a young adult), her relationship with her best friend, Jiyoon, a little bit of socioeconomic consideration (but really: not enough on this topic), and what feminism really is.

As a person who is also deeply committed to feminism, I read this with curiosity. How would the author explore the topic? I think she did a pretty good job of it. One of my favorite scenes is when Jemima is making out with a boy (I’ll let you read it to see who) and she thinks “the idea of one turning point seemed stupid, simplistic. Sex had to be a spectrum.” She is allowed to explore her sexual side without it being smarmy or tittilating. It is human and messy and surprising, a significant part of our lives, and the author let it be that for Jemima.

Other things annoyed me a bit, like when she and Jiyoon die their armpit hair blue. Seriously: You can be a feminist and still shave your armpits. If you want.

At any rate, one thing that resonated with me was that quote I started with. While this is less important when you leave high school, it is still something you have in your life as an adult: how do other people see me? Who am I in their eyes? Jemima thinks she is just the “Mildred”—the person on the Triumvirate who is there because of their grades, while the other positions are based on votes and, thus, popularity. But as the story progresses, she learns that people see her in other lights. Which made me think about how people see me…in my head I’m the weird, quiet lady who is mostly invisible and unnecessary. But maybe other people who know me—co-workers, neighbors, friends even—see me in a different way? I don’t know. Life isn’t a novel, after all.

While this wasn’t a life-changing book for me, it was compelling and thoughtful and I am glad I picked it up on a whim from the New Book display.