My History with Louisa May Alcott's novel Little Women

She preferred imaginary heroes to real ones, because when tired of them, the former could be shut up in the tin kitchen till called for, and the latter were less manageable.

Fifth grade was a difficult year for me. It was the year that everyone’s alliances began to form, and here I was, shy and nerdy and, frankly, easily excluded because I didn’t go to church much. I lived in a little town, and we almost never had any new students, but that year, we had five: two sets of twins and a non-twin. Four girls, one boy.

I was sure I was in for an influx of new friends, but only kind of. I was still nerdy and shy and didn’t really know how to fit in, but some of the new kids were sort-of my friends. I remember feeling lonely a lot that year, except when I wasn’t, and maybe that was the time in my life when I learned not love reading not just because of loving stories, but because of its power to assuage loneliness. 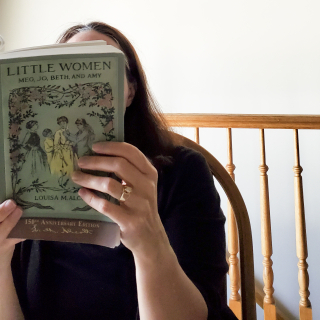 The March sisters were my constant friends.

I wish my mom had bought me my own copy, and that I still had it, but I checked out the library’s copy. It was a hardback, without a dust jacket, and the cover was a dirty pink linen. It had the Frank T. Merrill illustrations. I think I read Little Women five or six times that year; one time I read the whole thing over the weekend. (I know this because I put those 499 pages on my reading chart and my teacher, Mr. Strong, called my parents because he was concerned about me reading so much. Or maybe he thought I was lying, I don’t know.) I remember once being upset over friends, but not being able to cry about it, so I had my mom take me to the library. I checked out Little Women, went home, read the two chapters about Beth dying, and had a good cry.

I’m not really sure why or how I ended up picking it up in the first place…maybe it was just a lucky find, but Little Women came into my life, as some books do, at exactly the time I needed it. Meg, Jo, Beth, and Amy became people I trusted and relied on. They always did the same thing, every time I reread the book, and rereading made me feel like I was included somewhere. Marmee was such a different mother from my own, and sometimes I was baffled by the talks she had with her daughters, but I loved her. I could relate to Meg’s issues with her clothes not being quite right, as I always felt that, too (in particular one pair of melon-colored pants that I HATED and felt so uncomfortable in but my mom loved them and so sent me out in all the time anyway…I remember looking at how wide my hems were compared to Lori’s, who was wearing pegged jeans before pegged jeans were cool and literally blushing I felt so wrong and out of place in the world.) I loved that Meg’s daughter was named Daisy. I wanted to be able to draw like Amy (alas, still do). There was a bit of Beth in me—the shyness and the love of cats, and since we were both third daughters in a family of four girls, I felt a special attachment to her. I loved reading about their little domestic details and imagining their house, especially the attic where the plays were held. And since even then I loved babies, my heart was broken over the Hummel’s lost one.

But of course, as with so many other bookish girls, my favorite was Jo. It was her love of books, partly, and her desire to be a writer. (How many women who want to be writers found that spark as girls reading about Jo’s adventures?)  She was spunky and courageous and energetic and altogether herself. I know I didn’t have the words then to understand this, but what made me love Jo was her ability to push forward and be who she was, especially in such a society, with its narrow rules for women. I was drawn to the very fact that she did know herself, in some way, and then worked to be that person. I didn’t even know how to tell my mom what kind of pants I wanted to wear, but there was Jo, going to New York, writing her stories, rejecting Laurie. (Of course, that last broke my heart.) To my preteen brain, she seemed in control of her life in ways I would never be, and by reading her story I got to at least witness someone doing that.

Sometime during sixth grade, I reread Little Women for the last time. I can’t explain this, either: why did I stop rereading it? I had that brief stint in middle school when I was friends with the popular girls; it lasted until I had the audacity to rent the movie Cujo for my twelfth birthday party, and then I wasn’t anymore. But maybe those few months gave me another kind of courage, the start of the knowledge of how to be in the world. It would be years until I could be like Jo, until I could be unrepentantly myself (I am still learning to do that, honestly), but it started with her companionship during those years. I turned to other, darker books as company, but Jo and her sisters and Marmee and their genteel, quiet world always stayed with me.

For our library’s city-wide read this year, we are doing Little Women. (If you live in Orem, you can come in and get a free copy for your family.) I was set to host the book club meeting for September, so I went ahead and did Little Women so as to participate more in the other programs. Which means that for the first time since sixth grade, I reread Little Women. My impression of it as an adult is so deeply tied to my relationship as a child that I can’t write about it without writing this history first. So, my next blog post will be about my rereading of the book, but I felt like this history needed to be told for the next part to make any sense.