The Blazing Purple F on My Back: Thoughts on Feminism, The Handmaid's Tale, and the Barrett Confirmation

I wrote this post based on the novel The Handmaid’s Tale. The novel, not the TV show. I haven’t watched the TV show. I probably never will watch the TV show. Nor have I read the sequel Atwood published last year, The Testaments, because I’m fairly annoyed she even wrote it. Does that make me a handmaid’s-tale originalist?

In Margaret Atwood’s novel The Handmaid’s Tale, one of the most important characters is an Aunt Lydia. In the society of Gilead, there are strict social assignments for women; the Aunts are women who instruct the Handmaids (whose sole function is to try to conceive and carry a baby to full term, preferably one who is not a “shredder.”) Women have almost no power in Gilead, except for the Aunts. In fact, the social structure wouldn’t work without the Aunts, because they are the people who indoctrinate the Handmaids. The Aunts support the patriarchal structure by subduing women’s ability to think and act for themselves. By fulfilling this role, they gain the tiny amount of power the society allots them. They can move about the world with more freedom; they can “work,” and they are not beholden to a Commander as the Handmaids and the Marthas are. 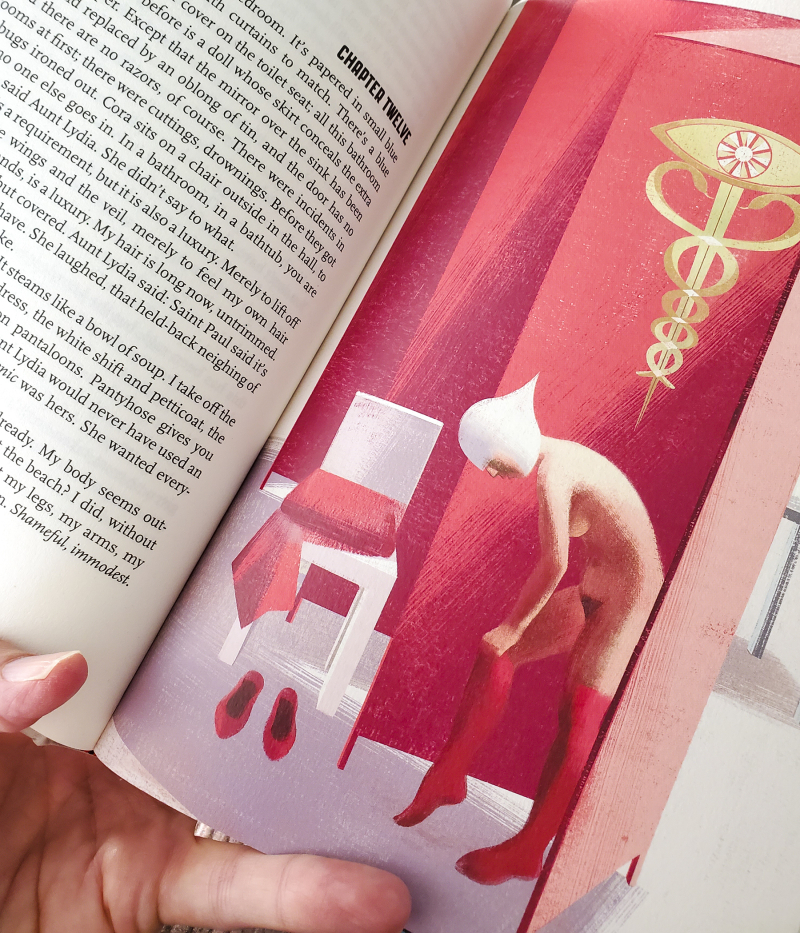 (Illustration from the Folio edition)

My thoughts were crowded yesterday with this story and these characters, as the reality of the Barrett confirmation sunk into my psyche. (I knew about it the night before, of course, but I blocked it out. Then I went to sleep and my psyche let it in.) But I also thought about America itself, and what I was taught about America. I thought of the lessons I had in my fifth grade class, which is my first memory of learning about politics; Mr. Strong taught us that one of the defining characteristics of America’s society is that the Supreme Court is impartial, neither conservative nor liberal. I remembered saying the Pledge of Allegiance on the first day of third grade, when I thought I might love school again after hating second grade, and the day in eighth grade when I said it in Spanish. (I can still say it in Spanish.)  I thought about other history and politics classes I took, in junior high and high school and college. The series of checks and balances that were designed to keep justice impartial. The scarf across Justice’s eyes, meaning she was blind to left or right. The ideals a president should represent, whether he (it was always a he) was a Democrat or a Republican: intelligence, fairness, broadmindedness. The concept that politicians were, in effect, in their position to serve the American people.  The lofty goals of the founding fathers, based on the lofty morals of the Greeks who invented Democracy.

I believed in that America. I thought that America was real. Of course, as I grew older and I learned more about humanity, I also learned the reality of people. How often we are motivated by selfishness and greed. How power corrupts. How racism affects so many people. How women's voices are silenced. How presidents have simply been men, with both good and bad traits who either rose to the challenges of their times or didn’t. How history is almost always only one side of the story, usually the victor’s. How much is erased, how much is filtered through the storyteller’s perspective. But I still believed in that America. Or at least, in the possibility of it. Imperfect, but we all had that beautiful, ambitious goal of creating a society where everyone is free.

And I thought about the Aunts.

I first read The Handmaid's Tale during the summer after I graduated from high school. This comment from Aunt Lydia stuck out to me. It stayed with me even after I finished the book; when I reread it a few years later, I read waiting to meet it again, because it troubled me. I didn't quite understand it:

There is more than one kind of freedom, said Aunt Lydia. Freedom to and freedom from. In the days of anarchy, it was freedom to. Now you are being given freedom from. Don’t underrate it.

Freedom from: the threat of rape. The threat of other violence. The necessity of getting out of bed in the morning to go to work. The real pain of dropping your baby off at daycare. The worry of finances. The heartache of a bad marriage. The emotional drain of always feeling less than because you are a woman. Freedom from those things can only be gained, Aunt Lydia is saying, if you give up your freedom to: to make your own choices, to control your own body. Isn't it worth it?

Whether or not it's worth the exchange is not in the thought process of the Aunts. Of course it is worth it, because the freedom to brings risk, while the freedom from brings safety. That that safety is suffocating doesn't matter. The lack of risk matters, and if the Handmaids understood their value (as breeders, of course, not as human beings), they wouldn't feel suffocated. It is the Aunts' duty to ensure this way of thinking, to protect the women from their own weaknesses. They feel righteous in their position, these Aunts, because they are a hinge. They "protect" women from themselves while simultaneously ensuring men's power (and thus their own illusion of power).

Those Greek ideals of the founding fathers? They are still levers pulled mostly by men, and the Aunts are behind them, supporting their elbows.

When the Kavanaugh confirmation happened, part of me was destroyed. It changed my relationship with male figures of power forever. It altered my relationship with my faith in ways I doubt will ever be repaired. But part of me knew: it is men being men. Bros are going to support their bros. It’s what they do. Men are always going to support men, even the worst of men, because in doing so they reinforce their own power structure.

But this Barrett confirmation?

This is a whole other level of betrayal.

Barrett is an Aunt. Rather than rebelling against the dominant male power structure, she believes it. She uses the male system to gain power, and the power she wields she will use to harm women.

Yesterday, I sat in my kitchen. I needed to get things done at home before I left for work—clean the kitchen, swap out the laundry, get some packages ready to mail. If nothing else, I needed to put clothes on and brush my hair. But for a little while, I couldn’t. For a little while, all I could do was sit on the stool in my kitchen, weeping. Because all of those ideals, all of those lessons about the constructs of American society that keep us from slipping back into the dark ages: they are broken. Or maybe they were only ever lights and mirrors, only the appearance of a democracy.

What do I believe in now? Now that I have lost my religious faith and my national pride?

Men using power to hurt women is one thing. It is what they have tried to do for most of human history.

Well, that has been done throughout history, too. There have always been Aunts. Think, for example, of the Salem Witch Trials. There would have been far less damage done to women if there hadn’t been so many Puritan Aunts, busy turning other women in as witches because that was the access to power that men allowed them. Or what the nuns did to orphans during the 1950s in Quebec. Or your local high school Queen Bee. I have known them at church, in jobs, at school. Especially in the Mormon church, where so many women refuse to even acknowledge the way the power structures of the church suppress them.

Maybe this part of me is breaking, too. Maybe feminism is the next thing that will break.

I’m not sure I could count how many times I have had a discussion with so many different men, churchgoers and neighbors and friends and random library patrons and even family members. Those men who think that the problem with feminism is that it seeks to elevate women over men at all costs. That, to me, has always been a basic misunderstanding—a blatant one, in fact, for if you try to learn about feminism, you will start to understand that it is not about elevating women above men. It is about equality. About anyone, whatever their gender (or orientation, or race) being able to be the person they are, not the person society says they must be.

No one gets to say that anymore.

Because no feminist worth the purple F scrawled on her back would be OK with this confirmation. Not just because most Americans wanted whoever wins next week’s election to nominate the next Supreme Court judge. Not just because RBG’s dying hope was that she wouldn’t be replaced by a trump nominee. Not because the Republicans said we could hold them to their word if this happened in 2020. Not because Supreme Court justices should be impartial, not lackeys for the current president. Not because having the confirmation at the White House blatantly disregards even the smoke-and-mirrors approach of objectivity.

But because Barrett is an Aunt. Her motivation isn’t equality for all. It isn’t liberty or justice for all, not in English or Spanish or Swahili. It isn’t even to make things more equal for her own gender. Her motivation is suppression and power. It is the imperative of all Aunts throughout history: The correct way to live in this world is the way that men decide, and the Aunts exist to make sure that male vision becomes reality. The rest of us—Handmaids or Marthas—can submit willingly or be forced, but the Aunts will see it done.

The Aunts are traitors to their gender.

In a few days, I will be able to remember that the Handmaids are the rebels. But yesterday. But today. Right now I am still consumed with rage, frustration, sorrow, grief.

A today will come, though, when I can turn those emotions into change.

We cannot let the Aunts win.

I stand with you & shout "We cannot let the Aunts win" from this side of the globe.

Thank you for this! So eloquently speaking my sadness, anger, grief. And also my shared youthful ideal of what the Supreme Court and Justice should be.

Yes to all of this.